ONRUSH (Xbox One) REVIEW – Make Way For The Stampede 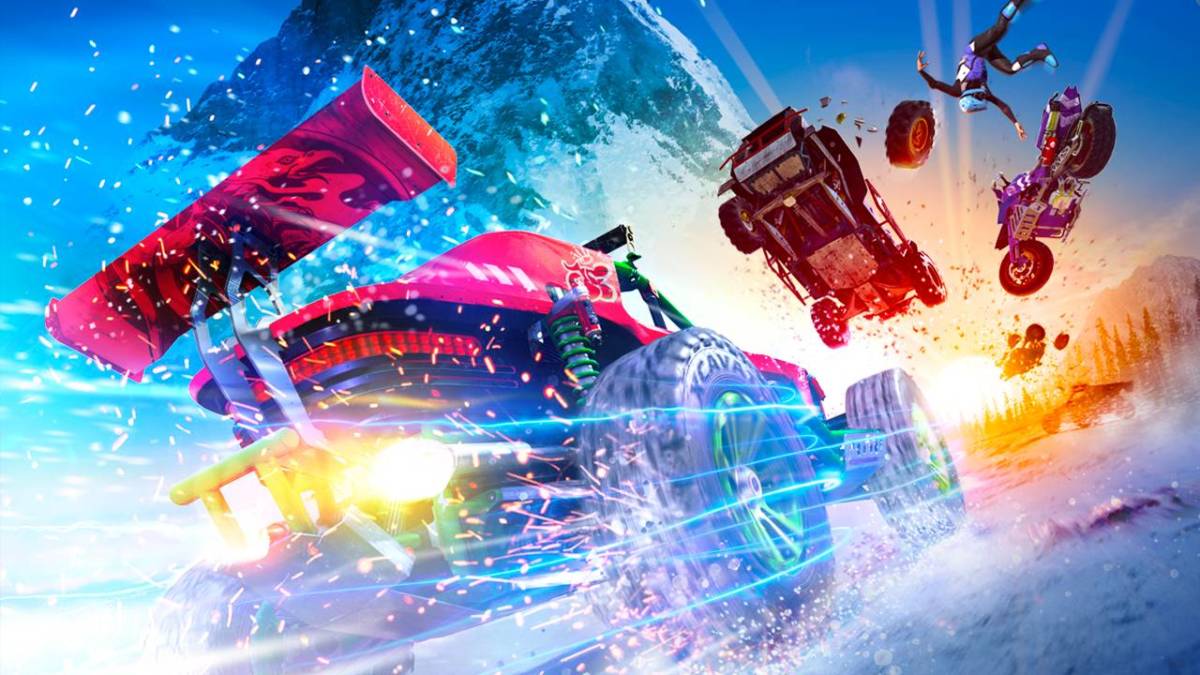 We’ve been on the ONRUSH hype train for a while now, though if we’re going back the game’s vernacular – we’ve been part of the Stampede. The fusion of classic arcade racing with strategic team based gameplay is one that intrigued us from the get go. The behind closed doors session a few months back and open beta only helped confirm that first impression.

But now that the game is out and available for everyone, are we still as impressed? Basically, yeah. On paper, the list of influences, which includes games like Burnout and Overwatch, of all things, shouldn’t mesh, but the team over at Codemasters have managed to create something that drags one of gaming’s oldest genres kicking and screaming towards innovation.

If you’ve been living under a rock for the past few months, ONRUSH is a 6v6 driving game focused on constant action. Players race amongst what’s known as the Stampede, which includes the 12 competitors and a horde of fodder vehicles that exist only to be destroyed. 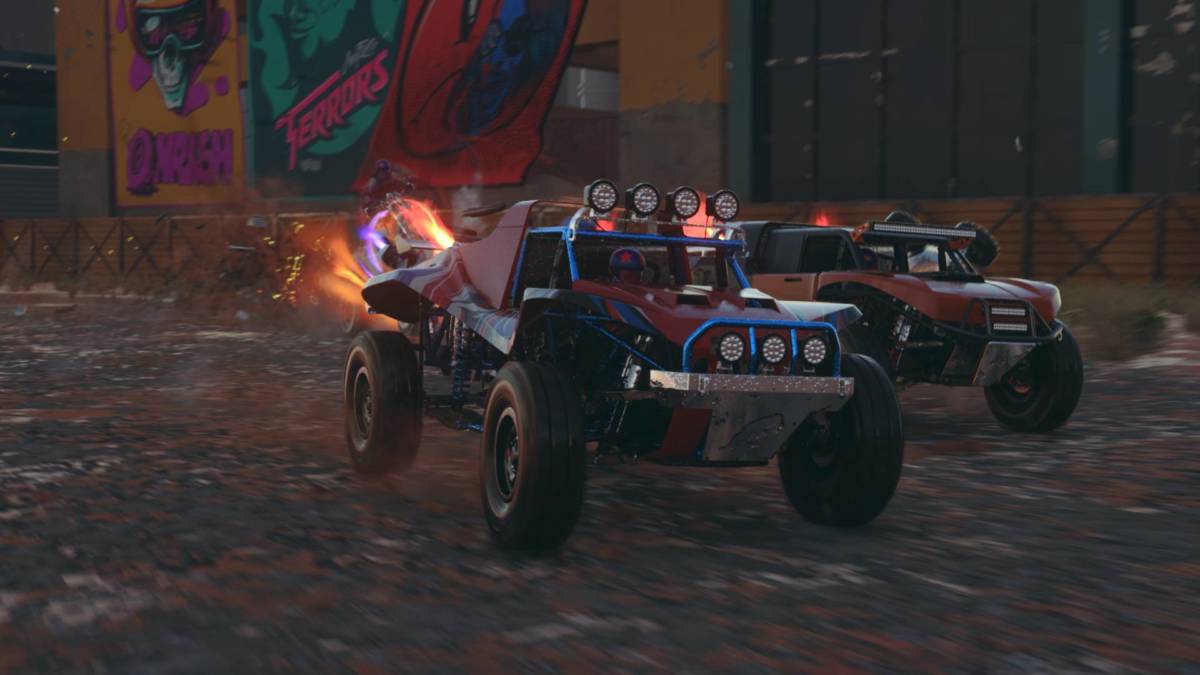 The idea of the Stampede is that you’re never too far away from the action. You’re always in the thick of things, trading paint and, more often that not, turning vehicles into scrap metal. It’s a brilliant idea that eliminates the problems of more traditional racing games: being at the back of the pack is just boring.

The gameplay is split into one of four modes, each with a unique take on the tried and tested arcade racing formula. Those who already got their hands on the open beta will remember two of the race types. Overdrive is the simplest mode, where boosting earns points and whoever reaches a set amount first wins. As for Countdown, you must drive through checkpoints to stop your team’s countdown timer from expiring.

Now for the two new modes. In Switch, you’re given 3 lives and must survive for as long as possible, with the first team to lose all their lives losing the game. The main caveat to Switch is that each life puts you in a bigger, sturdier vehicle, meaning that your strategy will change depending on how many lives you have left.

This mode feels like a reverse version gun game, with your strategy changing depending on what level you’re at. When you start out on a bike, your primary concern is just to survive, but moving to the buggies or cars means you can be a little bit more aggressive in your approach. Wisely, if you lose all your lives, you can still participate in a massive truck, which makes you the ultimate tool for offense or defense. 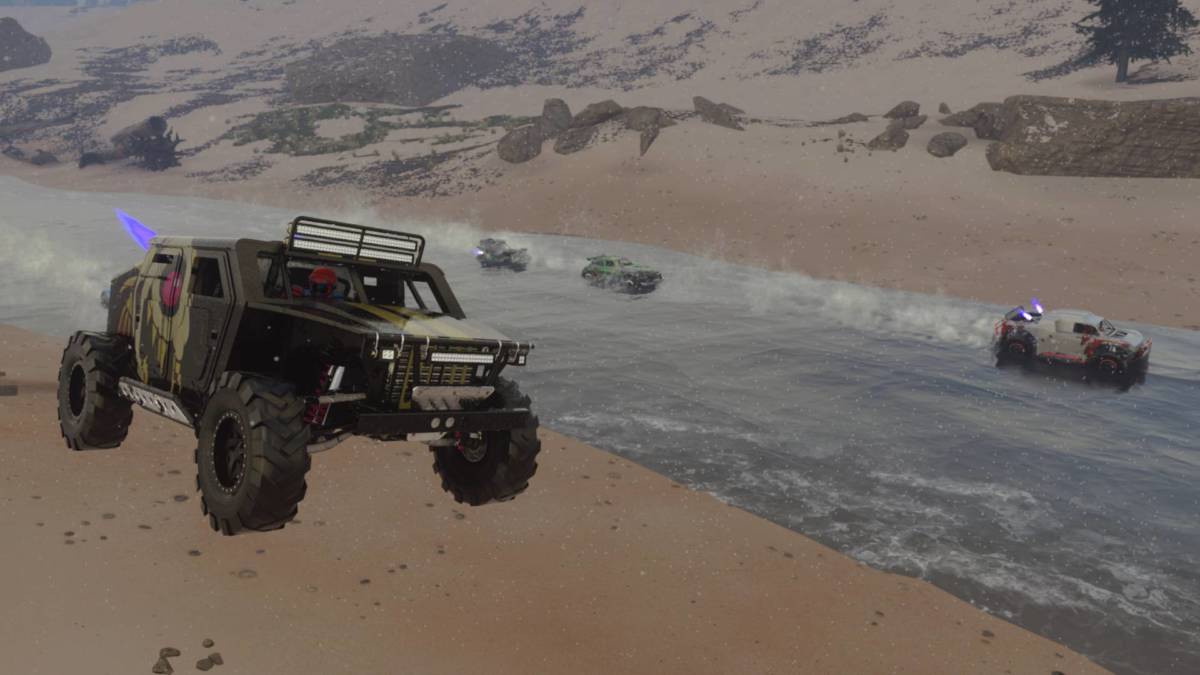 Lastly, Lockdown operates like King of the Hill, with both teams vying for control of a moving hill. One team must have a majority number of players inside the zone for a certain amount of time in order to take the point. It’s a mode that tests both how you attack and defend, but also your driving skill.

Of course, a racing game is nothing without vehicles, and ONRUSH takes a unique approach to that too, as it’s here where the Overwatch influences come to the forefront. Each one of the eight classes has a unique ability, a way of building RUSH and a RUSH ability.

The RUSH abilities are game changing skills that can either provide big boost for your team or actively screw over your opponents. In order to use these moves, you have to gain and expend boost, which again feeds back into the Stampede system. At every moment, ONRUSH encourages you to get stuck in.

The brilliance of the RUSH abilities is that they add a new element of strategy to a game that could have easily been about smashing cars into walls for fun. It forces you to think more about your vehicle selection in regards to your team.

For instance, using Dynamo’s Rush during Overdrive to give your team boost power is a surefire way to score points. Titan’s Rush, which deploys slowing blockades behind you, can be great for delaying opponents who are trying to reach the point in Lockdown, while Blade can use a Tron Lightcycle-esque Trailblazer to force drivers away from the checkpoints in Countdown. 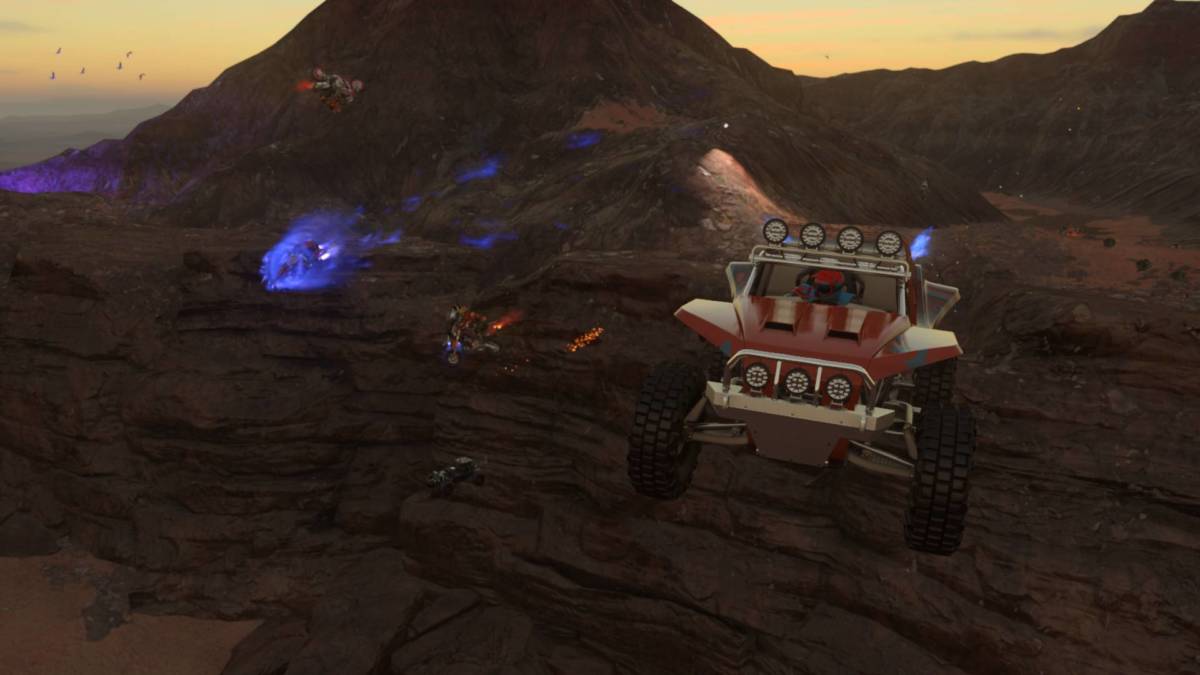 Tactical choices like this means that winning isn’t decided by who the fastest driver is, but by which team employs the best strategy. Still, as much as that gives the game a unique selling point over the competition, it can still be frustrating when you run the race of your life and your teammates are nowhere to be seen. Any dreams you might have of carrying teams on your shoulders like a firefighter should be dissuaded immediately.

The main portion of the game is the Superstar mode, which includes dozens of combinations of events across 12 tracks and the 4 modes. Though it serves as good practice before heading online, the AI itself can feel a bit easy. So long as you’re anywhere halfway approaching not terrible, you shouldn’t have a problem.

In a stroke of genius, the Superstar mode can also be completed in co-op mode with up to 5 friends, making it the perfect training ground for trying out new tactics. Even if you and your friends can’t stand competitive multiplayer, you still have a reason to play ONRUSH.

That being said, the online mode is where the game comes to life, as that’s when the action is at its most intense. There’s a level of predictability that comes with racing the AI, but human opponents are a whole other beast entirely, and that makes for a much more thrilling race. There can be a few issues with lag, with cars seemingly jumping around the track, but that’s consistent across most racing games.

In terms of framerate and resolution, the original Xbox One is the weakest version, pumping out 900p and 30fps. It’s comparatively worse than both the Xbox stablemates and the PlayStation, but we experienced very little drops during our time with the game. The little Microsoft engine that could managed to maintain a consistent output, despite the insanity that occurs on screen.

A big issue for ONRUSH going forward will be one of longevity. Despite the fact that the game is incredibly fun with plenty of strategical depth, there’s very little to keep players coming back beyond earning gear crates via leveling up. These crates then unlock cosmetic items for both the drivers and the vehicles.

Though that method has proven quite effective for games like Overwatch, it remains to be seen if that good fortune will translate. Still, ONRUSH could certainly benefit from the introduction of new content, more specifically new vehicle types, new tracks and even new modes. Fortunately, Codemasters recognise this, and have announced that ranked season mode will come into play soon.

The question of this review isn’t whether or not ONRUSH is fun, because it is. Incredibly so, in fact. The real question is whether or not the game will have the proverbial stamina to stay relevant in the weeks and months post-release. Given the quality of the game as it is, along with Codemasters promising to work hard on the game after launch, we’re fairly optimistic ONRUSH will do well.

Verdict
Onrush is a lot of things. It’s brash, bold, experimental, but most importantly, really good fun to play. Its success will be determined by how well the team based concept catches on with gamers at large, but we’ve got high hopes for it. Microtransactions: None
8.5