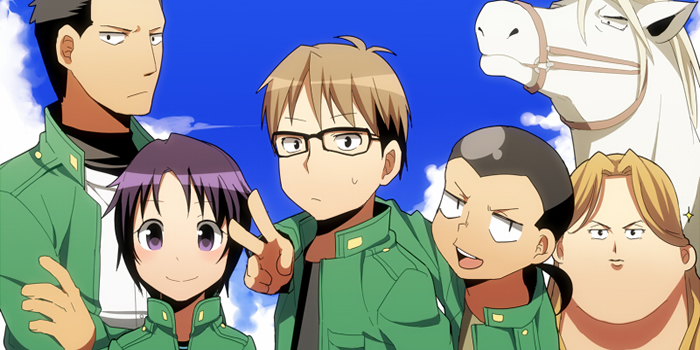 I’d spent a lot of time away from anime over the years, but during the last 12 months I’ve fallen in love with exactly three shows; Attack On Titan, Kill la Kill and Silver Spoon. The first two offer the necessary spectacle and entertainment (if AoT can indeed be labelled “entertainment” as it’s one the most stressful TV shows on the planet) that I’ve come to love from the medium, but out of all of the above, it’s that last one that occupies a special place in my heart.

The show has resonated with me for more than one reason. At first glance, it’s light-hearted, comical and charming, but what makes it truly special for me is the way in which it deals with an issue I’ve been thinking about a lot this year; when your life hits a wall and you feel like you know nothing, what do you do next?

That’s the dilemma facing angsty teen Yugo Hachiken, who flees to an agricultural college after disastrous exam results at his former high school and a subsequent falling out with his family and in particular his strict, demanding father. Yugo’s world has come down around his ears and, with his self-esteem and clarity at an all-time low (and no experience of farming whatsoever), he starts over in the hopes of redeeming and rediscovering himself. To add to the existential ennui, his friends and classmates at Yezo Agricultural High School all know their purpose in life, whether it’s to become a dairy farmer or vet. Yugo is the odd one out; he has no idea where to go or what to do. The best he can hope for is to take a swing and see what happens.

I don’t have a great deal in common with the character of Yugo Hachiken. I’m older than he is, I haven’t taken any big exams recently and I have a wonderfully supportive family, but I’ve had a testing year so far. Without wanting to turn this piece into some bleating sob story, here are the facts: I’ve endured a major nervous breakdown, a few battles with anxiety and depression, a career crisis and a breakup. What I share with Yugo is this – when your world feels like it’s fallen apart, how do you go about putting the pieces of yourself back together?

Yugo starts his time at Yezo Agricultural School with almost no sense of self and undergoes a series of brutally steep learning curves, but along the way he meets new people, makes new friends, and discovers more about himself in a couple of months than the previous couple of years combined. The way all this is depicted in the show is by turns entertaining, insightful, and on occasion, deeply moving. I didn’t expect any piece of Japanese animation that didn’t have the word ‘Miyazaki‘ attached to it to be able to do that.

The show’s appeal is boosted by its colourful supporting cast, including cute equestrienne Aki, baseball prodigy Ichiro and portly business savant Tamako. Equally entertaining are the facility’s teaching staff, with a pig specialist who looks like Sarah Connor and a horse instructor (modelled for some reason after the great Japanese Buddha of Kamakura) who emits a zen-like glow as he guides his students. The viewer gets to know all these individuals in tandem with the show’s protagonist, so by the end of Season 1, we feel as close to them as he does.

The journey that Yezo undertakes is by no means easy (at one point he is hospitalised for exhaustion) but the overall lesson that the anime appears to be teaching us is a valuable one; it’s okay to be confused, even disillusioned, about your life. It’s okay not to know your purpose. It’s even okay to run away, but if you want things to improve then it’s up to you to put the work in and if you give it your all – while letting new people in along the way – then incredible things can happen and you may discover parts of yourself that you never even knew existed.

Art doesn’t always have to be painful to be worthwhile or instructive. Sometimes the best art is the stuff that lifts you up, inspires you and gives you food for thought. When it needs to, Silver Spoon doesn’t pull its punches but it also has empathy and inspiration in spades. It’s as comforting and nourishing as a hot bowl of ramen and just as moreish. Seasons 1 and 2 can be found over at Crunchyroll and I hope and pray there will be a Season 3 before too long. This is a show that makes me want to try new things, work hard at them and see what surprises come up along the way.