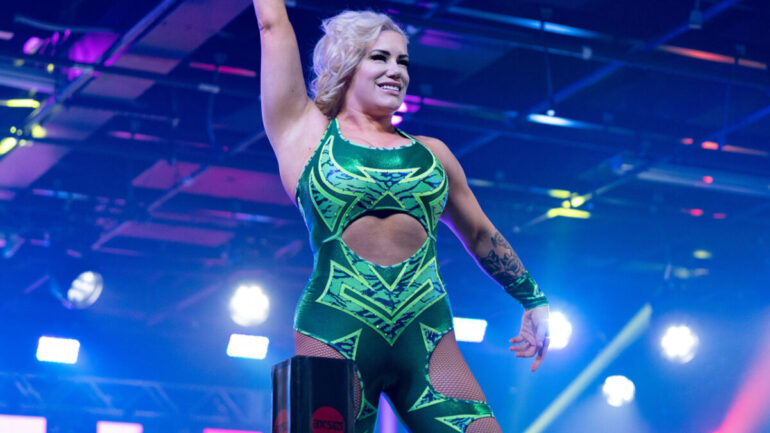 After failing to dethrone current Impact Knockouts Champion Deonna Purrazzo at January’s Hard to Kill Pay Per View, it was announced that Taya Valkyrie, a former Knockouts Champion in her own right, would be leaving Impact Wrestling after four years with the company.

Following her loss at Hard to Kill, Valkyrie was revealed as the culprit behind the attempted murder of John E. Bravo and being sent to prison by Tommy Dreamer in order to write her off of Impact Wrestling TV, after which her leaving was made official.

The speculation began almost immediately as to whether the longest reigning Knockouts Champion would lace up her boots for All Elite Wrestling or WWE. Finally, on February 14th, the wrestling world got its answer via PWInsider that Valkyrie has signed with WWE to be part of its NXT brand.

With this news in mind and a whole slew of talented female wrestlers on the NXT roster, let’s speculate and dream about who Taya Valkyrie could face in NXT.

Current NXT Women’s Champion and “Genius of the Sky” Io Shirai has faced off with some of the best that NXT has to offer with the likes of Rhea Ripley and Candice LaRae even defeating Charlotte Flair and Ripley at the same time to win the Women’s Championship.

Her use of speed and high flying agility has made her a dominant force on NXT, a perfect opponent for a debuting Taya Valkyrie.

With Taya’s blend of strength and physicality, NXT could easily push her immediately into the title picture and maybe even be the one to dethrone Shirai when the time comes. Either way it would be an incredible spectacle to see them in the ring together.

The former NXT UK Women’s Champion has come a long way since the beginnings of NXT UK. Her mix of agility and physicality has made her a strong opponent for the likes of Rhea Ripley, Ember Moon, and even NXT Women’s Champion Io Shirai.

As Toni has been making moves in the women’s main event scene on NXT, it’s incredibly likely that we will see her become champion in the very near future, and Taya may be the ideal challenger for her.

Both Valkyrie and Storm boast a physical wrestling style which would make a match between them one to watch, be it for a championship or as a standard feud.

At NXT TakeOver 31, an eclipse shone over NXT’s Capital Wrestling Center as “The Shenom” Ember Moon made her surprise return after a year out due to injury.

The former Women’s champion has seen her fair share of competition throughout her tenure in NXT including Shayna Baszler and, longest reigning NXT Women’s Champion, Asuka.

Mixing speed and strong offence with her devastating Eclipse finishing maneuver, she would make a prime challenger for a talent such as Taya Valkyrie and with any luck, us fans will not have to wait long to see it.

LeRae is a woman who no doubt has a championship reign in her future. One half of NXT’s power couple with real life husband Johnny Gargano, it seems almost fated that one day she will be Women’s champion.

Another agile competitor who knows how to dish out damage using submission moves and hard strikes. Having her take on the powerhouse of Taya Valkyrie would make sure wrestling fans have a special match on their hands.

Their face off would not even have to be in singles competition as Valkyrie also has a wrestling husband in the WWE in the form of John Morrison. The possibility of having two power couples of the WWE face off is too good of an idea to pass up, especially taking into account the talented individuals on both sides.

Returning to NXT with a new look and attitude, Xia Li has been tearing up competition as of late in squash matches.

Her use of quick paced, martial arts style strikes and kicks shows perfectly that her future with NXT is very bright, and she will be a dominant competitor not too long from now.

Both her and Taya Valkyrie could make a perfect first feud for both women as both of them will have something to prove moving up the women’s roster towards the possibility of a championship.

Whoever Taya Valkyrie does face upon her debut in NXT one thing is for sure, she will definitely be a women’s champion sooner rather than later, maybe even before the year is out.

READ NEXT: Is Santos Escobar A Future Main Event Star?