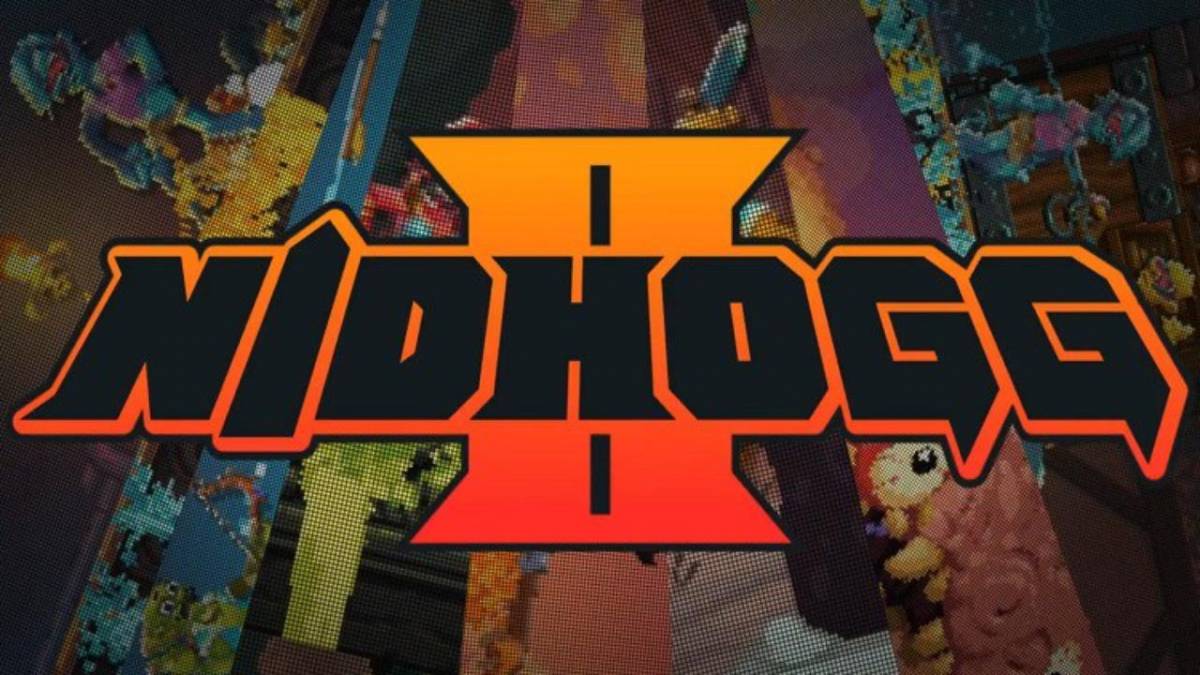 That was my personal introduction to the world of Nidhogg; a random video from the Canadian YouTuber’s Super Best Friends Play, where they’d chant the above any time the winner was swallowed by the titular creature. A bonkers first impression for a bonkers game.

If you are unfamiliar with the original Nidhogg, it was a 2D weapon based fighter best described as a cross between fencing and Red Rover. Bear with me. Both players are given rapiers and must battle to the death. Whoever gets the last kill is allowed to progress towards the ultimate goal of being devoured by the Níðhöggr located on the opposing player’s side of the screen. 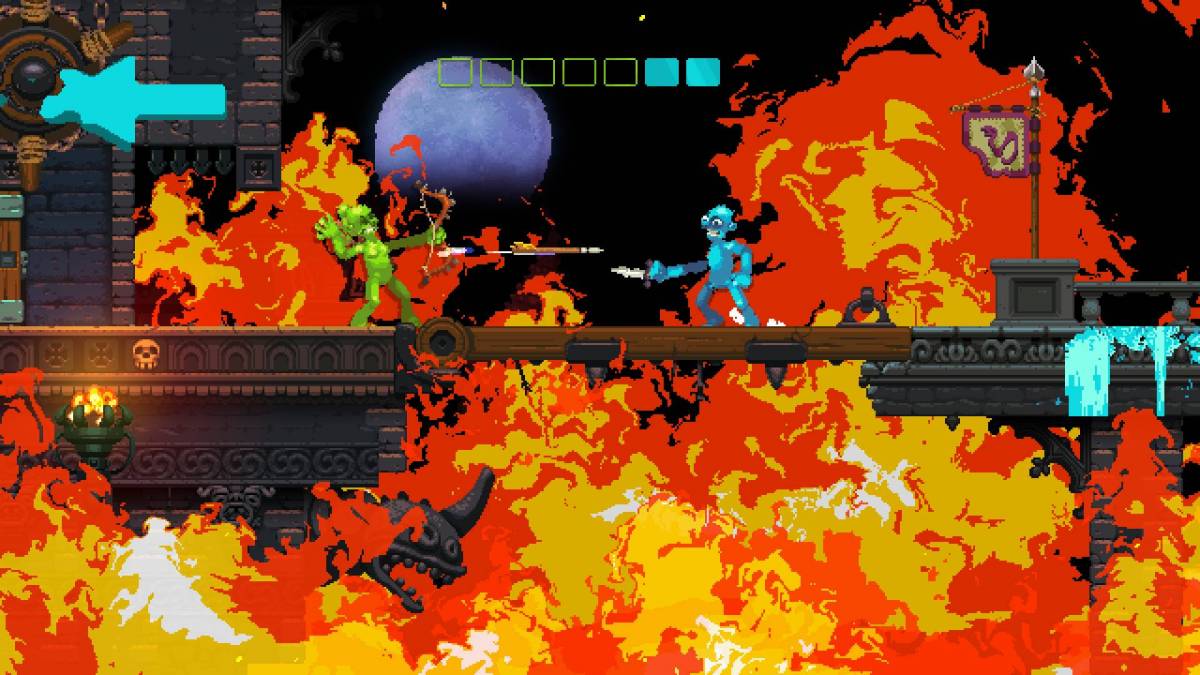 The old cliche of “easy to pick up, hard to master” rang true with Nidhogg. At its base level, it’s a frantic battle to defeat your opponent and run like a madman towards the inevitable swallowing. However, if you go a little deeper, the game is built around positioning, pokes and footsies, whilst switching between high, middle and low stances to find an opening in your opponent’s defense.

If you can understand the range of your attacks and know when to strike, you’ll have a better chance of winning. It’s a testament to the game design that Nidhogg offered the depth and strategy of a regular fighting game without the barrier of execution that stops lower level players from enjoying the game fully. It’s a two button fighter, yet it’s more engaging than some 6 button fighters. 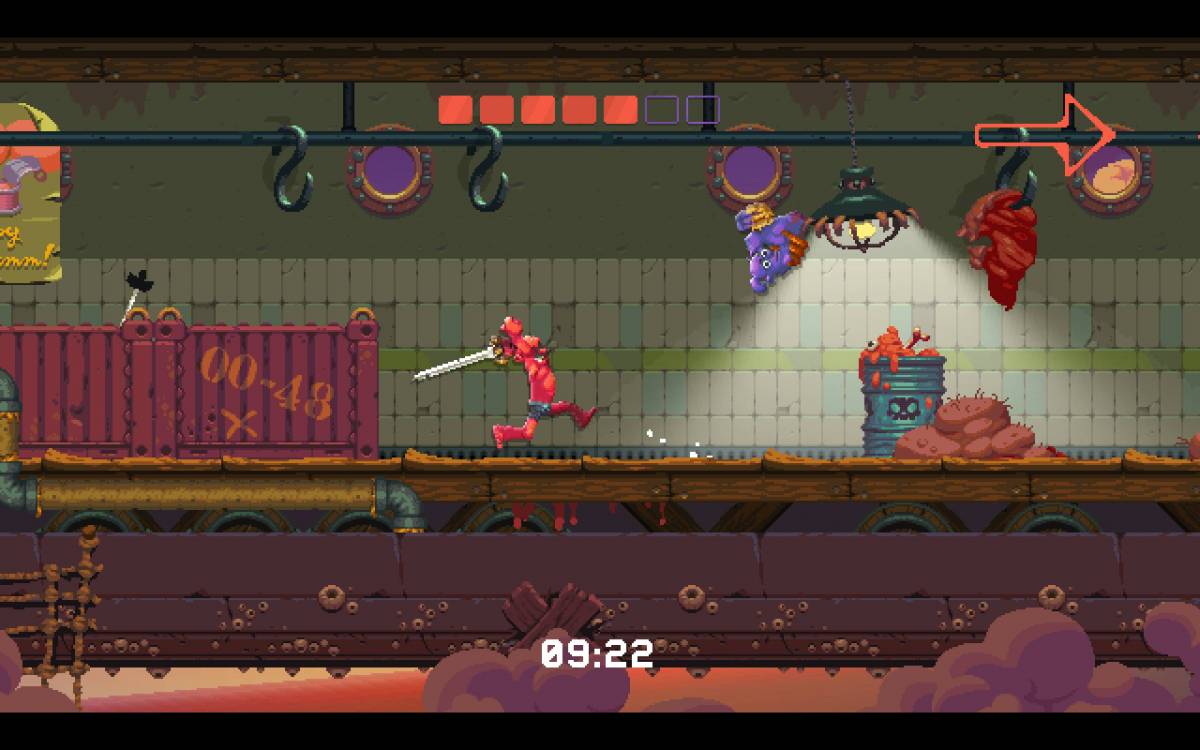 So what’s new with Nidhogg 2 that separates it from the original? Nothing much, other than the art style which appears to have divided opinion. The minimalistic pixel art of the first game has been replaced with vibrant colours and characters on the wrong side of grotesque. Still, you can give them mohawks and hotpants. Different strokes for different folks.

The core gameplay remains the same, with just more stuff going on. Any strategies that worked in the previous game seem to translate to the newest iterations. For instance, if your opponent slips past you, your best course of action is still to run off screen instead of engaging in the futile effort of chasing down your opponent.
The new additions come in the form of new weapons and stages. You’ve still got your standard rapier, which is basically your all-rounder, a broadsword that’s slow but possesses great range and the ability to disarm your opponents easily, a swift dagger with no range but serves as a fast projectile when thrown, and a bow and arrow. 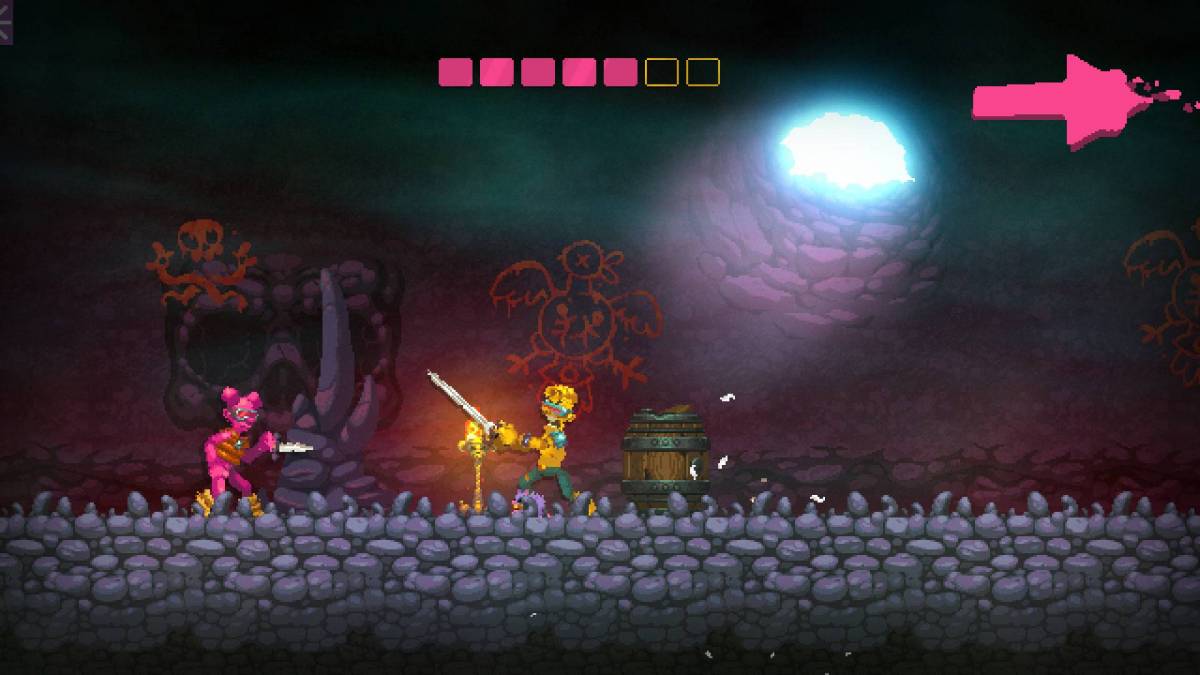 Before you think that the inclusion of a bow and arrow breaks the meta of the game, rest easy. The arrows take forever to fire, can be easily reflected and using the bow leaves you super vulnerable if your opponent manages to close the distance. Plus, you now have the ability to customise matches and toggle the inclusion of these weapons. You don’t want someone showing you their best Green Arrow impression? Just remove the bows.

Nidhogg 2 more than doubles the amount of arenas with which to “get the dick”, and they almost act as characters in their own right. If you don’t know the stage hazards before you load into a level, you’re already at a disadvantage to your opponent. If fighting your opponent isn’t enough to deal with, you also have to contend with conveyor belts, lava and bottomless pits, along with tunnels that stop you from jumping over your enemy. The new additions help give the game enough life for the veteran players, and makes this the definitive version of Nidhogg. Unfortunately, if you don’t have a sibling/friend/spouse to play with on the same screen, Nidhogg 2 longevity matches that of a house fly or a fart in a tornado. The arcade mode is a series of 10 fights against AI barely fit to challenge the deafblind. What’s worse is there’s no story or ending, no ceremony or anything to say “Good job, buddy! You sure killed those incompetent AI opponents!”. It makes completing the arcade mode unsatisfying and anti-climactic. 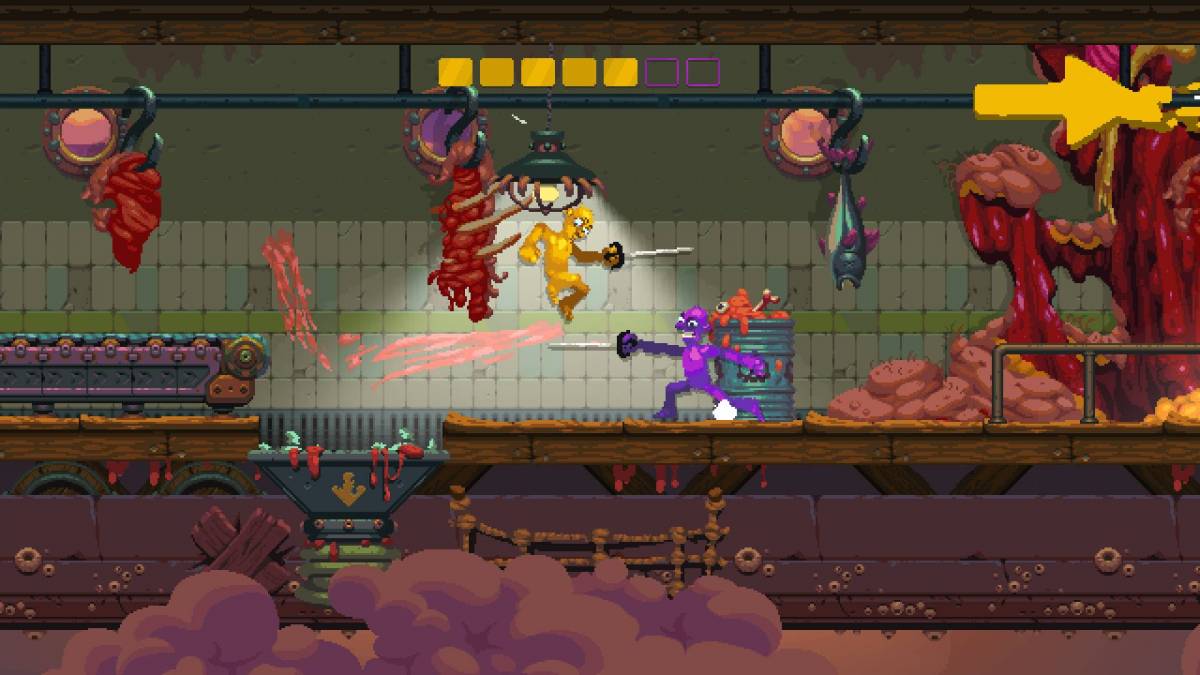 The online component is another can of worms entirely. The whole affair is a lag-filled mess that frustrates and irritates more than it entertains. Nothing kills the mid match hype like a sudden lag spike, and that’s assuming you can get into a game. Oftentimes, your opponent will just disconnect in the lobby.

The only mode worthy of note in Nidhogg 2 is the offline 8 player Tournament, which is great when you’re holding a house party and people are getting excited/salty for the action on screen. But unless you’re some kind of social butterfly, you probably won’t get chance to try it out. In the end, Nidhogg 2 is a story of wasted potential. With better modes and more stable online play, this game could have have been so much better.

Verdict
Despite how much fun the gameplay is, Nidhogg 2 is worthless without the friends to play it with. Unless you've got a group of comrades willing to drunkenly duke it out, Nidhogg 2 is tough to recommend.
6
Cultured Vultures is a pop culture website established in 2013 covering all things gaming, movies, and more. We eat your words.
All The News On The Biggest Games