Refreshingly, when the New Amsterdam gang breach professional ethics they at least keep it away from the patients. 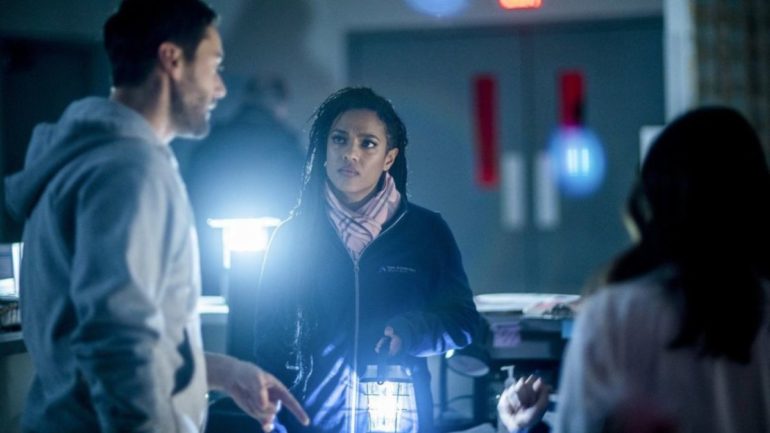 This episode of New Amsterdam, “Sanctuary”, focuses a bit more on Helen and Max’s relationship and sheds light on a crucial aspect of a complicated relationship. Often when we see phsyical relationships on medical dramas, most of them lead to hot, steamy sex in the on-call room, but New Amsterdam is different. For example, it has taken Max and Helen’s friendship and split it into many different roles. She’s his doctor, she’s his friend, and she’s his deputy. There are so many different hats Helen has to put on when dealing with Max, but “Sanctuary” makes her realize that this can no longer be the case.

This Max/Helen arc is very intriguing because the series didn’t choose to fixate on pushing them to hook up, or spend a lot of time with flirty banter. They got straight to the core of the issue, which is way more complicated than just getting together for fun. After seeing Max spend day and night on hospital issues and working with patients during the blackout, Helen realizes that he’s just too much. He doesn’t want to take care of himself, but he wants the benefits of it without sacrificing anything. It’s not feasible, and Helen finally decides to make a stand. It’s a commendable storyline because it’s the reality of their situation. You can’t just concentrate on making two characters hookup, there is so much more to think about than that.

Max demands a lot from Helen, whether he sees it or not. He’s optimistic, enthusiastic, and willing to go to any lengths to make the patients happy. But Helen doesn’t think that he can keep that up and take care of himself, and she’s not wrong. In shows like Grey’s Anatomy, the show doesn’t focus on why a relationship shouldn’t work, and instead tries to force characters together, which results in a cascade of devastating events. Having Helen step away from Max in every capacity is exactly what New Amsterdam needed for the story to push forward.

“Sanctuary” takes disasters to a whole other level in the midst of a blackout but manages to control it in a very inspiring way. Case in point? Dr. Meriweather is mid-surgery and left holding a patient’s heart in his hands with no electricity. It’s mind boggling to perceive such a situation but it’s also not illustrated in a way that’s over the top. Instead of focusing on the dramatics of it, New Amsterdam makes it a learning opportunity. What could a person in Dr. Meriweather’s position do to get through something like this? Whatever humanly possible, that’s what. Of course, we’ve seen situations like this in Grey’s Anatomy (everyone remembers the ship accident episode!).

Another aspect of “Sanctuary” focuses on an inmate patient who was an electrician before being incarcerated. With the generators not working, Max had no choice but to use this inmate’s expertise to get things up and running as soon as possible. There’s a frightful level of trust that Max has to put into the patient and it’s a jarring situation to watch unfold. Should he let this patient help? Or will this patient betray his trust and run away? Max eventually lets the inmate try and fix the issue, but it’s important to keep in mind how monumental this moment is. It’s easy to ignore and shake it off but Max chooses to trust the patient in order to save the lives of others. It is a testament to the nature of a character like Max, he makes bold choices for the hopes that it will make things better for everyone. There has never quite been a character like him, and there may never be.

“Sanctuary” also gave us a new unexpected duo in the form of Dr. Kapoor and Dr. Hartman. After getting stuck in an elevator together, the two had to work together to get through a scary and claustrophobic situation. Not to mention, they managed to help a patient together as well. This is a pairing we never knew we wanted but once again, New Amsterdam does something unexpectedly amazing. Other medical dramas like The Resident and Grey’s Anatomy could benefit from mixing it up sometimes. We often see the same doctors working together over and over again and it gets mundane. New Amsterdam changes it up every chance they get, and it is something fans truly appreciate.

Going back to Dr. Meriweather’s patient, when the blackout occurs, everything turns off. It’s a scary thought to think how much the world relies on technology to get us through literally everything. As Dr. Meriweather stood there with a patient’s heart in his hands, many of us as viewers can’t fathom this type of scenario actually occurring. Are there protocols in place? Probably, but the idea that our daily lives revolve around some sort of technology is mind blowing – and scary. New Amsterdam reminds us of that in “Sanctuary” and it’s something we should be reminded as often as we can.

This episode of New Amsterdam highlights many different topics, ones that stand out immediately, and ones that are not so obvious. The relationship between Max and Helen is a unique one because they work together but they’re also close friends. Not to mention, Max was being treated by Helen for his cancer. These sorts of relationships often complicate things but it’s very inspiring to see Helen take a stand and place a distinction between it. These complicated, intricate relationships are the heart of any show and New Amsterdam is excellent at making them the central focus. Furthermore, in the midst of such a horrible situation, New Amsterdam brings out very positive aspects of it. There’s a doctor literally holding a heart in his hand, but New Amsterdam makes it feel inspiring rather than devastating. How many medical dramas could pull off something like that? Not many at all.

As New Amsterdam approaches the end of its first season, there are many lessons we can take away from it. Many of them come from “Sanctuary” alone. What should one do in the face of a catastrophe and how should one handle the repercussions of a complicated relationship? Just watch an episode of New Amsterdam, and you’ll learn all you need to.