Season 2 tones it down on the bodice ripper elements, which truly allows the romantic tension to flourish. 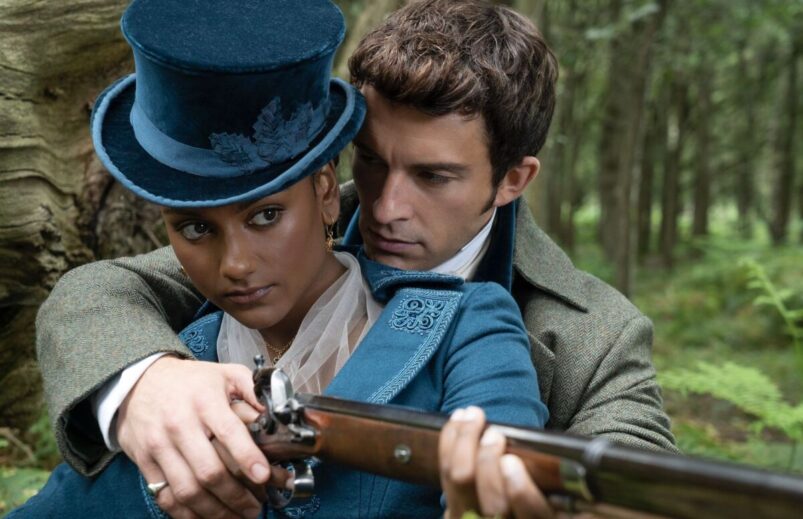 I’m an ardent fan of Julia Quinn, which means I’ve read all the novels in the Bridgerton series. As far as favourites go, I’m especially fond of Anthony and Kate’s love story. The two characters have such wonderful banter with each other and emotional backstories that really help establish their individual character arcs. Going into Season 2 of the series, I was aware that it was going to be focused on the Anthony and Kate romance, and I was desperately hoping it would live up to its book counterpart.

While Season 1 was fairly faithful to the book for the most part, Season 2 isn’t. The differences are quite significant, and I think the series benefitted greatly from making those changes. Certain aspects that work for novels don’t necessarily work for TV, so I appreciate that they did a good job adapting the material – after all, if it’s just a copy of the book, what’s the point of that?

When Anthony Bridgerton (Jonathan Bailey) first meets Kate Sharma (Simone Ashley), she’s on horseback zipping through a field. He races after her, they conduct a bit of banter, and then they go their separate ways. When they meet again, she overhears him talking to the men about his intentions for the social season – to find a wife with good breeding, and with some modicum of wit. She takes offense at the way he describes the whole process, as if women are mere chattel to be acquired, and she doesn’t mince words as she lays into him about his choice of words.

Their run-ins with each other become problematic later on when Anthony takes an interest in courting her sister Edwina (Charithra Chandran). Why Edwina? Well, she fits everything he could want in a wife, and so he decides he must have her. But Kate will not stand for it, and each attempt by Anthony to win her sister’s affections is derailed or thwarted by Kate. Despite all this friction between the pair, it’s clear that they’d be good together. As the eldest of each their respective families, they’ve spent most of their lives fulfilling their duties and obligations. All Kate’s preparations are so that Edwina has a successful season, while her own needs and happiness come second.

Anthony works the same way, thrust into responsibilities as viscount from a young age due to his father Edmund’s (Rupert Evans) passing. He runs the estate and takes care of his family’s needs, but this duty has transformed him into quite an unhappy person. The flashbacks involving the late viscount’s passing are a painful watch – it moves so quickly from a cordial hunting trip with his son to the tragedy of death. Evans doesn’t have much screen time as Edmund, but my god he makes quite the impact. Never have I seen something so quick have such a poignant effect. Ruth Gemmell as Lady Violet Bridgerton knocks it out of the park, as well. What fantastic acting from the pair, and I do hope we get more flashbacks involving the two in the later seasons.

This season’s success depended so much on Jonathan Bailey’s ability to play the tortured romantic hero, and he does an excellent job. He’s so affecting in all the flashback scenes, and his transformation from an enthusiastic youthful boy to an adult with responsibilities is truly heart-wrenching stuff. We come to understand how his father’s death has led to his decision to go into a loveless marriage. He’s felt the pain that comes with losing someone he loved so much, as well as being the only one truly privy to his mother’s agony as she bore the loss of the love of her life. He never wanted to be the cause of such pain, nor feel it himself, but of course life has other plans for him now that Kate’s in his life.

Simone Ashley does great work as Kate Sharma, capturing the character’s free spirit as well as her vulnerabilities. Her scenes with fellow actress Charithra Chandran, who plays her sister Edwina, are truly lovely and heartwarming, and the series does a great job at adding little touches of Indian culture within the show. Most importantly, Ashley and Bailey have sizzling chemistry together. The show constructs so many moments of yearning and passion, with the two constantly on the verge of a kiss, but never quite getting there until later on in the season. This season does such a great job at building the romantic tension, so much so that you might just topple off the edge of your seat. Bailey does smoldering very well, and every time the pair exchange glances, you will feel yearning so palpable that it almost feels like you’re invading their privacy.

Their romantic chemistry is so good that sometimes it feels like a chore when each episode turns to the secondary plots that follow the other characters. This season pits Penelope (Nicola Coughlan) and Eloise (Claudia Jessie) against each other, which is an interesting creative decision, though it does make Penelope less endearing. We found out at the end of last season that Penelope is Lady Whistledown (voiced by the incomparable Julie Andrews), and while Eloise initially enjoyed reading Whistledown’s scandal sheet, this season she sets her sights on loftier reading material, and dismisses Whistledown’s writing as mere gossip and lacking substance. I don’t particularly like what they’ve done to the two best friends, but I appreciate the show’s attempt to chart new directions for the series, so now even book fans don’t have a clear sense of how things will go.

The whole Lady Featherington (Polly Walker) secondary plot with the new Lord Featherington didn’t really do much for me, either. Thematically, I understand its intention, which is to show the precarious state women are in when the man of the house dies and the source of income dries up. This forces the women to get creative so that they’re not tossed out on the street, as we see with Lady Featherington and the Sharma family. While the books are light, fluffy reads, the show reminds us constantly that we should never look at this historical time in awe. It wasn’t a great time for women, and even though Kate takes offense at women being looked at as property to be acquired, this was very much the reality back then. Not everyone is so lucky to be able to choose love, so if the opportunity does arise, it should be seized without a second thought.

Both Anthony and Kate come to see that sometimes they have to put themselves first. If they had done that from the start, it would have saved everyone all the drama and heartbreak. But then again, we wouldn’t have gotten such a riveting season, would we? Bailey and Ashley are so great together that it’s bit of a shame that we didn’t get more scenes between them. Season 3 needs more Anthony and Kate – make it happen, Netflix.

Season 1 may have been quite the bodice ripper, but I have to say I much prefer the slow burn of Season 2. I’m sure fans of the Duke of Hastings (Regé-Jean Page) won’t agree with me, and while he’s certainly missed, the romantic set pieces of season 2 are just slightly better. I mean, we have Anthony sniffing the fragrance that surrounds Kate like a man obsessed – romantic TV doesn’t get any better than this. 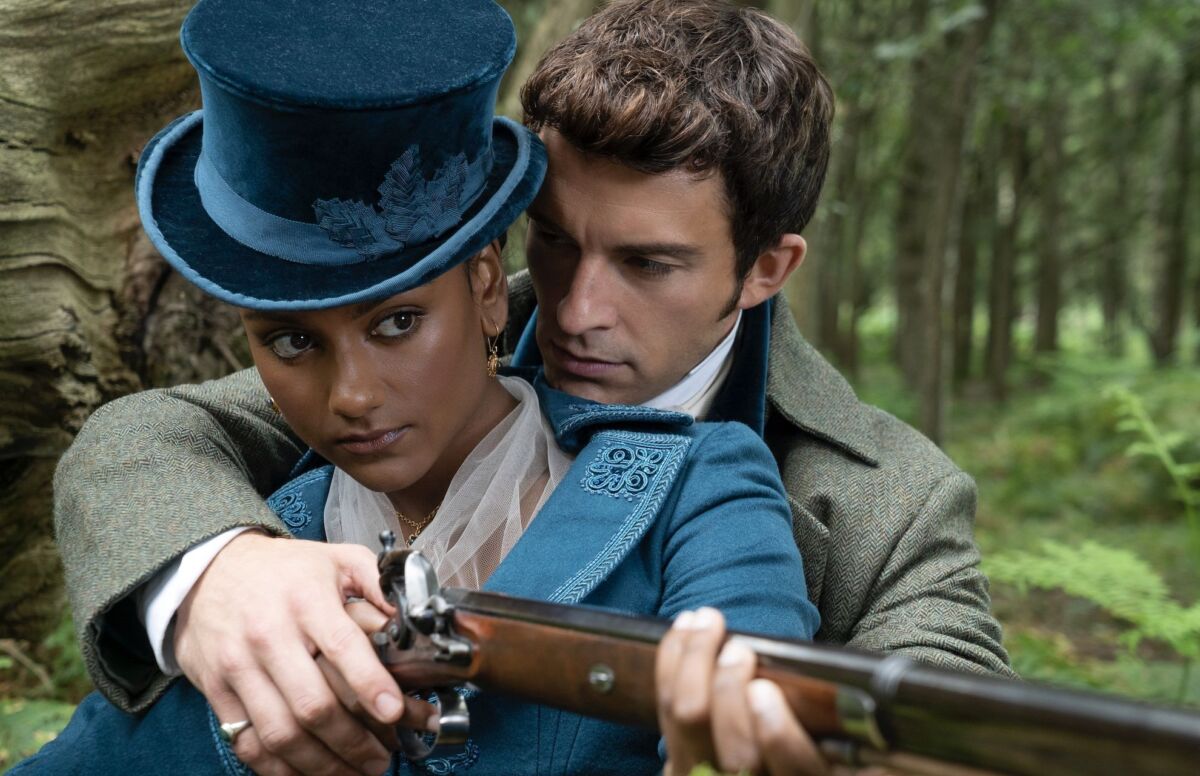 Verdict
Even though Bridgerton's first season is overtly sexier, Season 2's slow burn romance actually does a better job of keeping the viewer's interest, with great romantic set pieces and an erotically charged atmosphere constantly maintained.
8.5
Cultured Vultures is a pop culture website established in 2013 covering all things gaming, movies, and more. We eat your words.
All The News On The Biggest Games