10 Movies Like The Lord of the Rings You Should Watch 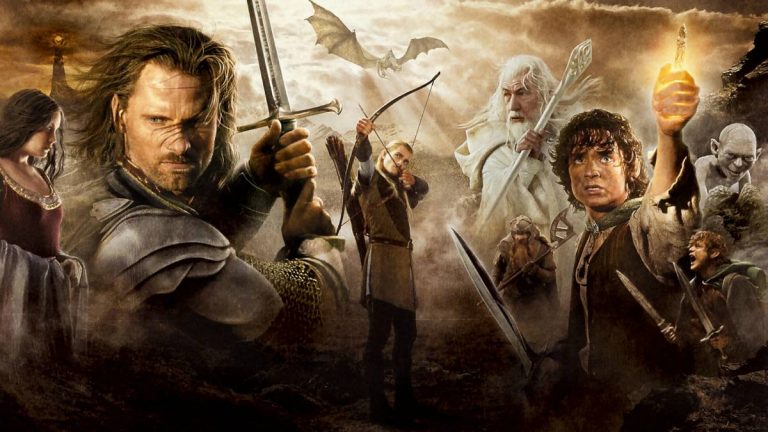 The Lord of the Rings

In the midst of its 20th anniversary, one thing remains clear about the Lord of the Rings trilogy: These movies are still as good as they were when they were released between 2001 and 2003. Director, producer, and co-writer Peter Jackson had seemingly put his heart and soul into getting this massive film adaptation of J.R.R. Tolkien’s epic fantasy trilogy made. A convoluted pre-production history was the only beginning for a film franchise which wasn’t expected to do particularly well, but would inspire many movies like The Lord of the Rings for years to come.

Not only did it find overwhelming success among critics and audiences almost equally, but every film would go on to box office dominance. Beginning with The Fellowship of the Ring and continuing with The Two Towers and The Return of the King respectively, the series even found itself in Oscar contention. Between these films and the Harry Potter franchise, an extraordinary period of fantasy adventure cinema emerged.

For those enjoying the 20th anniversary of this trilogy, and who are looking for a bit more to enjoy, we’ve got a lot from that period to consider, as well as movies that could certainly be seen as inspirational to the Lord of the Rings movies. From the long list of potential titles, here are some of the most relevant movies like the Lord of the Rings.

No one’s going to get Bridge to Terabithia confused with The Lord of the Rings. Based on the book by Katherine Paterson, Bridge to Terabithia nonetheless concerns two characters who are pulled from the world they know, and dropped into a new realm of creatures and strange forms of legitimate magic. Where Bridge of Terabithia goes from there is quite a bit different from Frodo and Sam, but both still share the journey required to go from being an unwilling participant to the hero of the day over a massive fantastical region.

Both were also shot in New Zealand, in case the staggering beauty of Auckland combined with mystical creates is something you’ve been distinctly craving.

Bridge to Terabithia is also just entertaining on its own, with an impressive lead performance by Josh Hutcherson, good pacing, and some stellar special effects. The CGI work here does not overwhelm the excellent human characters or story.

After the success of movies like Lord of the Rings and Harry Potter, studios scrambled to find similar properties that could yield similar results. The Chronicles of Narnia, an astonishingly popular C.S. Lewis-penned book series which had been adapted in the past, just made sense. The first film in the series, The Lion, the Witch, and the Wardrobe, was given a huge budget, a strong cast (particularly Tilda Swinton as White Witch), and a sense of grandeur larger than perhaps the book itself. Against its budget, the movie grossed nearly $800-million worldwide.

Despite this success, only two of the seven books have been filmed. A fourth film was finally announced in 2013, but The Silver Chair never materialized, and likely never will. Netflix has since announced upcoming shows and films based on the rights, but it’s been a while since we heard about that.

J.R.R. Tolkien and C.S. Lewis were also besties, so there’s also that connection between these entities.

Deep worldbuilding and elaborate fantasy backdrops can be found in both The Lord of the Rings and The Dark Crystal. The execution of each of these stories differs from one another. The Dark Crystal pertains to the sole survivor of a species seeking a dark, magical crystal that will help them to restore balance to the universe. Lord of the Rings has a foundation that feels at least partially similar.

However, Lord of the Rings has a bit more to offer in the way of action and other components of fleshed out narrative. The Dark Crystal is a slower story that emphasizes dialog and the visual wonder of everything co-director Jim Henson (with Frank Oz) created with his team.

The Dark Crystal is perhaps the strangest and most fantastical thing Henson, creator of The Muppets and several iconic Sesame Street characters, accomplished in his long career. The creativity of this and the canceled-too-soon Netflix series deserves to be appreciated.

Before Lord of the Rings, dark fantasy enjoyed significant interest in the 80s, owing to the popularity of things like Dungeons and Dragons. The story of a wizard’s apprentice (Peter MacNicol) trying to destroy a dragon threatening the kingdom of Urland, Dragonslayer received good reviews, but didn’t quite make back its budget. This was a movie that simply got lost in the shuffle of a prolific decade for fantasy in any form.

Good performances and visuals aside, Dragonslayer benefits from trusting children to appreciate the darker portions of its story, as well as its lighthearted moments. Vermithrax is also notable as one of the most beloved dragons in film history.

Dragonslayer remains a lot of fun. The special effects hold up better than you might think, as well as the makeup. Movies like Dragonslayer can still be a bit jarring for those who have only experienced the last quarter-century of fantasy filmmaking.

Without the Arthurian epic poem upon which 2021’s electrifying, surreal The Green Knight is based, it’s arguable we wouldn’t have The Lord of the Rings. Tolkien himself loved the poem, reading and studying the poem so much that he eventually published a definitive translation. Somewhere in the DNA of Tolkien’s Middle-earth works lies The Green Knight, and this extends to the movies.

One of the strangest movies released by A24, The Green Knight has King Arthur’s nephew Gawain (an incredible Dev Patel performance) setting off on a dangerous mission to confront the dreadful Green Knight. His journey starts strange, and the proceedings only escalate from there. Director David Lowery, working with such minds as VFX supervisor Eric Saindon, created a grimy, maddening, and constantly haunted world for Gawain’s hellish crusade.

For anyone who doesn’t normally go for movies that are commonly defined as strange, The Green Knight is going to be one of the wildest cinematic rides you’ve had in a while.

Want to be really ambitious? Spend a long weekend binging The Lord of the Rings, The Hobbit, and the eight films which comprise the Harry Potter saga.

Even if you didn’t read the books, or particularly care about the story of a young boy (Daniel Radcliffe) fulfilling a destiny to defeat a great enemy before he graduates from wizard school, the movies are generally fantastic. Their success is likely to endure beyond the books themselves, which are not particularly well-written or interesting on their own. The movies took numerous creative cinematic steps to create a world so distinctly built for film that it’s almost impossible to not be impressed by them on their own terms.

Harry Potter as a series made stars of its three child protagonists, features an extraordinary supporting cast of some of the best U.K. actors of all time, and holds up nicely with its special effects. Remarkable to realize these movies started coming out at the same time as Lord of the Rings.

It would be weird to not mention The Hobbit trilogy, which expanded Tolkien’s 304-page children’s novel into nearly 8-hours of fantasy epic film fun. That said, we have to mention that quite a few people unfavorably compared Peter Jackson’s return to Middle-earth with his previous work.

The movies aren’t without their fans, and even detractors can generally find some really good moments across the trilogy. Most agree that Martin Freeman is excellent as Bilbo Baggins, whose sudden encounter with a wizard named Gandalf (a returning Ian McKellen) leads to an adventure that changes his life forever. The casting and performances by the actors cast as the dwarves who join Bilbo is by and large good, as well. Everything you like about The Lord of the Rings can technically be found in these films.

Still, due to a variety of production headaches and poor decisions, The Hobbit ends up being a hollow endeavor for many.

Talk to anyone who’s seen the 2005 historical fiction blockbuster Kingdom of Heaven, which received poor reviews from critics and audiences alike upon release, and they’re going to insist on seeing the director’s cut instead, which is a more rounded, cohesive viewing experience. The 2005 theatrical release has a lot of the same appeal, but nearly 50 minutes of additional material was added to the alternative version by director Ridley Scott (who loves tinkering with his films).

They are two fairly different movies when considering so much added story, character motivation, and the visual strengths Kingdom of Heaven was already known for. If the basic premise of a young blacksmith (Orlando Bloom) being pulled into a long journey and eventual conflict by his father (Liam Neeson) sounds good to you, the director’s cut is the way to go.

Like Lord of the Rings, Kingdom of Heaven features a seemingly impossible quest and large-scale warfare on a cinematic scale. The thematic similarities are certainly apparent.

Ralph Bakshi has directed some of the most unique, controversial animated films in the history of the medium. If you’re just now learning that he also directed a film that tried to cram The Fellowship of the Ring and portions of The Two Towers into a single 2+ hour experience, this may or may not be good news. It really comes down to your appreciation or simply tolerance for Bakshi’s visual style and how you feel about the faithfulness of an adaptation.

Yes, Peter Jackson’s trilogy made a number of changes to the source material. The 1978 Lord of the Rings made even more changes to suit its needs and resources, and there are likely going to be times in which you can’t believe this is based on the same book.

Still, the voice cast includes John Hurt as Aragorn and Christopher Guard as Frodo. The animation is also at times at least absolutely fascinating, if not impressive in many of its character designs. And good news, because if you do like this movie, as some do, there are other animated Tolkien adaptations out there.

Willow is now considered by many to be a classic. This charming story of a young man (Warwick Davis), who’s pulled from his comfort zone to a world of incredible potential and deep-rooted mysticism, is one of the best dark fantasy releases of the decade.

Willow is another example of what this genre had to offer before Lord of the Rings was released. Besides the similarities in the basic premise of both stories, Willow is a reminder that this genre has been fantastic in its offerings for a long time.

This is also a unique opportunity to see Ron Howard directing a story written by George Lucas. Howard’s ability to work with different types of films is apparent here, as the pacing and humor of his best works gels nicely with Lucas’ fantasy ideas.

Willow successfully tackles the darker parts of its narrative with an appreciation for the tone of the material. The film also takes full advantage of lovely performances by Warwick Davis, Val Kilmer, and Joanne Whalley.