Monster Jam: Steel Titans is not a good game, and goes from being meh to tiresome very quickly. 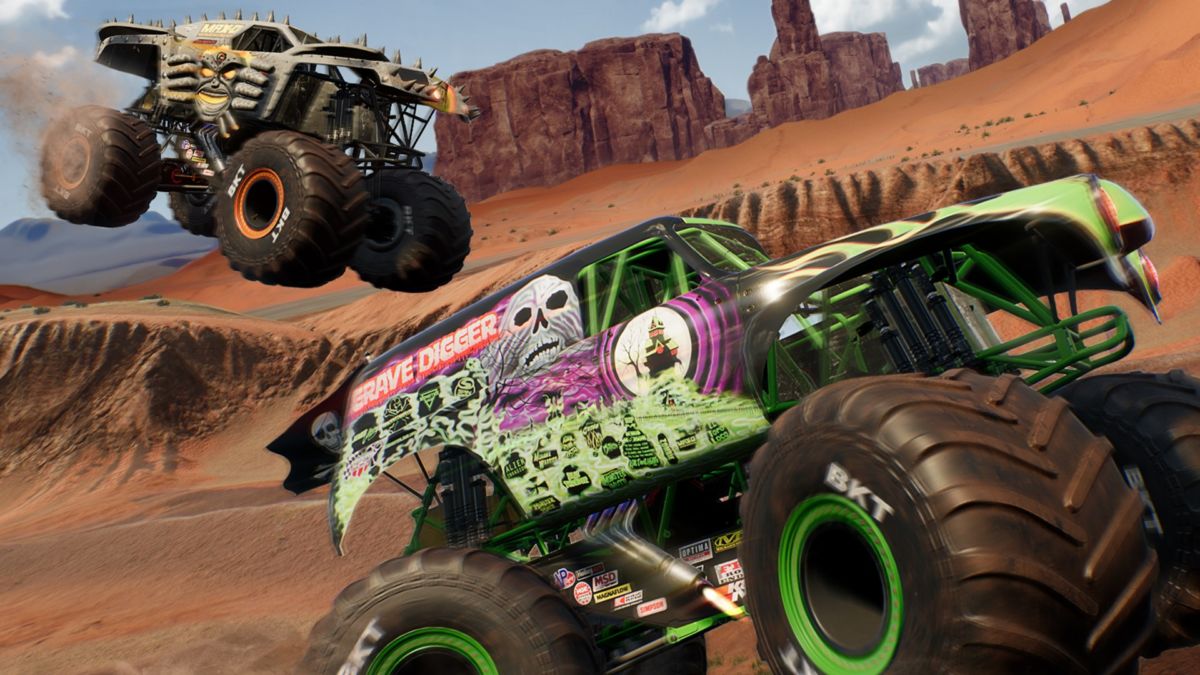 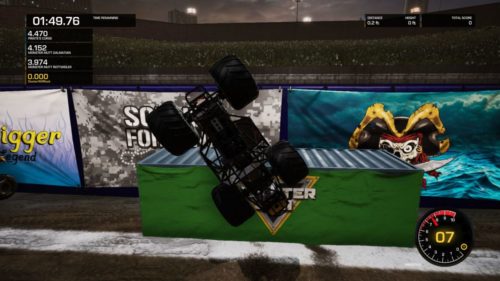 Monster trucks: they’re as American as Taco Bell, NASCAR and gun ownership. Much like Taco Bell, NASCAR and gun ownership, we over in the UK don’t really have those things in any major capacity. Many of us have only seen glimpses of monster truck events on TV or the internet, so it’s hard to understand the excitement surrounding them. Often when I think of monster truck rallies, I just end up thinking of The Simpsons’ Truckasaurus.

People across the pond go nuts for monster trucks, and events draw monster crowds — no pun intended. That is why, and this might surprise you, the Monster Jam video game series is 17 years old this year. Monster Jam first landed on the PS2 and Gamecube way back in 2002, and here we are in 2019 with the fifth entry in the core game series, Monster Jam Steel Titans.

The last monster truck game I played was a game for the original Playstation, which I believe was simply called ‘Monster Trucks’, so I was curious to see how this niche genre had evolved in 25 years. Monster Jam Steel Titans doesn’t start off in the best way, with a rather long loading time before you even get into anything.

When the menu finally arrives you are greeted with what I can only describe as ‘generic naughties rawk music’. Shrugging this off as possibly the sort of music you should expect in a monster truck game, I started a new game, and waited for it to load. And waited. The load times in Monster Jam are painfully long, but hopefully this will be improved down the line. 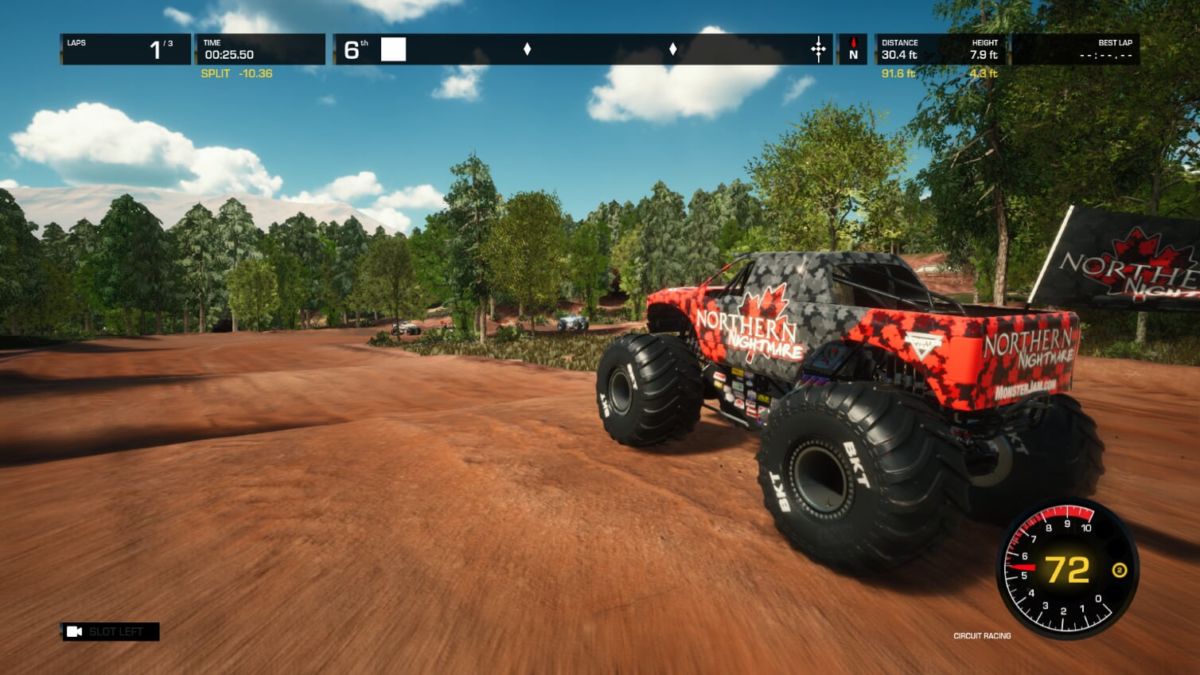 Once into the game, you start with an open area for you to practice freely; there are jumps and a few other obstacles to play around with. A quick jaunt over to the garage opens the tutorials, which go through the various game modes, and how to play them. Hit start and you can jump into either quick play or career mode. There are various modes that can be tackled in either selection.

Head-to-head is exactly what it says on the tin: a 1-vs-1 race. Circuit Racing is very much a traditional, lap based race, Rhythm has you racing point to point, in a usually bumpy, dirt bike style course. Waypoint sees you racing across wide open levels to reach way points against a number of other trucks.

There are also four non-race modes. Freestyle sees you performing stunts in an arena, whereas Two-Wheel Skills is fairly self explanatory. Timed Destruction sees you destroying items and Freeride is basically just practice mode. There’s a fair few modes to be had here, but there’s one issue: monster trucks.

The trucks in this game handle horribly. I’m not sure if that’s because they’re monster trucks — not exactly the most maneuverable vehicle known to man — or whether it’s because the game is just a little naff, but I feel the answer lies somewhere in between. 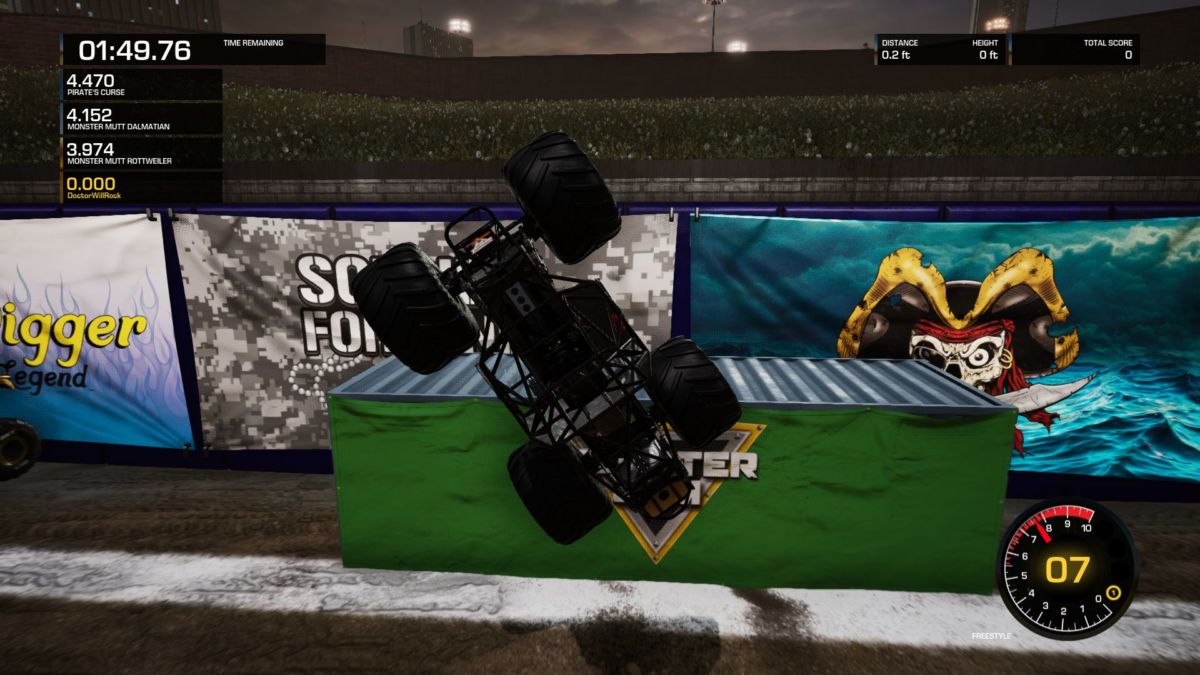 They look like they should handle like giant jellies on wheels, and they do. So does that mean they’re accurate to real life? Is that good or bad game design? Either way, it doesn’t make driving them any less annoying. The trucks sometimes feel as though they’re being driven in a slightly lower gravity, a bit floaty and light. Many of us will never know what it actually feels like to drive a monster truck, but personally, they feel a little lightweight — hardly ‘steel titans’.

Tied to this is Monster Jam’s bizarre physics. Monster trucks are huge metal beasts, but are also very agile. It seems that to address this, instead of making the trucks agile, they’ve tweaked the physics to make them appear more agile. The first time you perform a backflip in Monster Jam is impressive. However, after the fifth time you hit an immovable tree and are launched 40 foot into the air while flipping out of control, you’ll find yourself simply annoyed.

This has a huge knock on effect in a number of game modes, especially in waypoint, Where you’ll find yourself racing against several other trucks, bouncing off all sorts of terrain and launching yourself around the map uncontrollably. The A.I controlled trucks? They do not have that issue, even on easier difficulties.

Other races have other issues. For instance, while racing in Rhythm mode, I raced on a hard to see desert track, and it was a little difficult to know where the actual course is. Going off track for even a couple of seconds will see you teleported back onto the track, losing you valuable time. 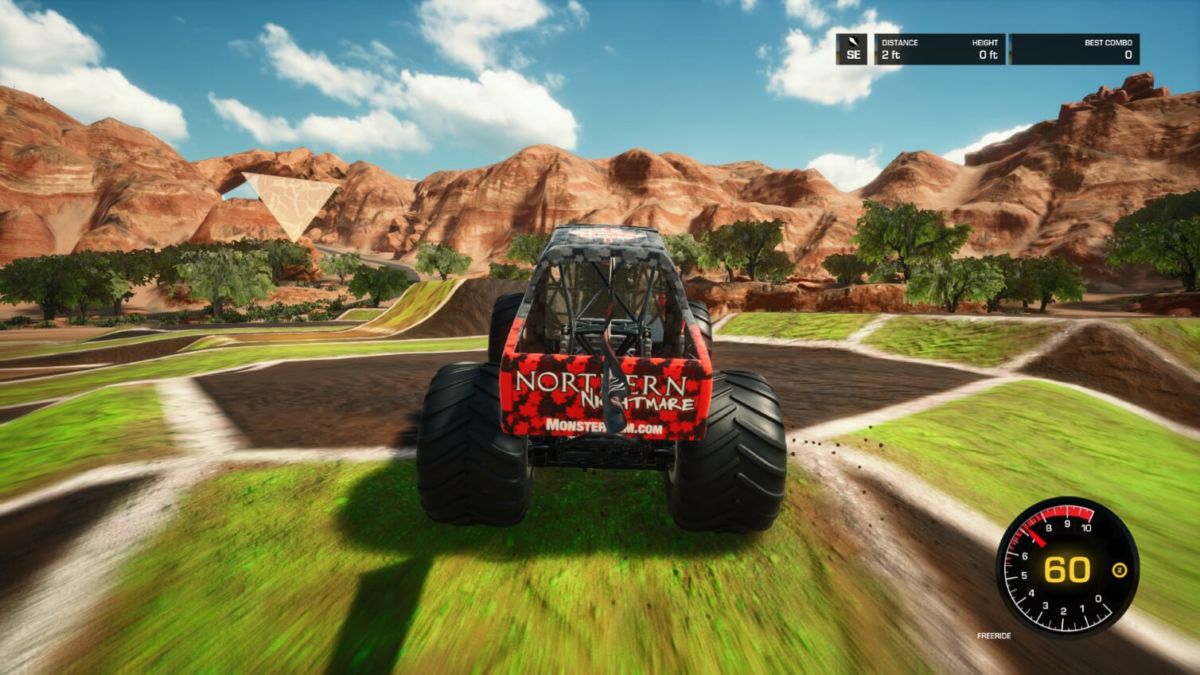 But surely there is at least one saving grace in Monster Jam’s freestyle stunt mode? No, there isn’t. After learning a couple of stunts, such as backflips and donuts, there isn’t a whole lot else to do apart from ramping off dirt piles to jump around the arena. It’s not particularly fun.

The strangest mode is Timed Destruction, which I hoped would be a destruction derby-style event. Sadly, it tasks you with driving around an arena and breaking boxes, cars and um, portaloos.

Graphics wise, Monster Jam is perfectly functional, if not very impressive. They do their job adequately enough, and have a bit of a scaled up, re-textured Xbox 360 look to them, but they’re just fine. What isn’t fine is the slow-down that I laboured through when racing tin some of the more textured, open levels. While it was far from unplayable, it was an unwelcome inclusion.

Steel Titans has the most basic audio. There’s not much to write home about, apart from the PS2-era engine sounds from the truck, which are, frankly, ear-bleedingly monotonous. Aside from the 00s title track, Monster Jam’s soundtrack is certainly an eclectic one. From rock to Latin to 50s b movie style music, it feels as if the developer has raided their royalty free tracks for this one.

Monster Jam Steel Titans has an identity issue. It’s stuck somewhere in between wanting to recreate the actual fun of monster trucks, and making just a fun, exciting game, and in the end it manages neither. It is a functional game, but that’s all. It’s not a very fun one, and Monster Jam is unlikely to appease anyone barring the hardcore monster truck loving crowd.

Verdict
Monster Jam: Steel Titans is not a good game, and goes from being meh to tiresome very quickly.
3