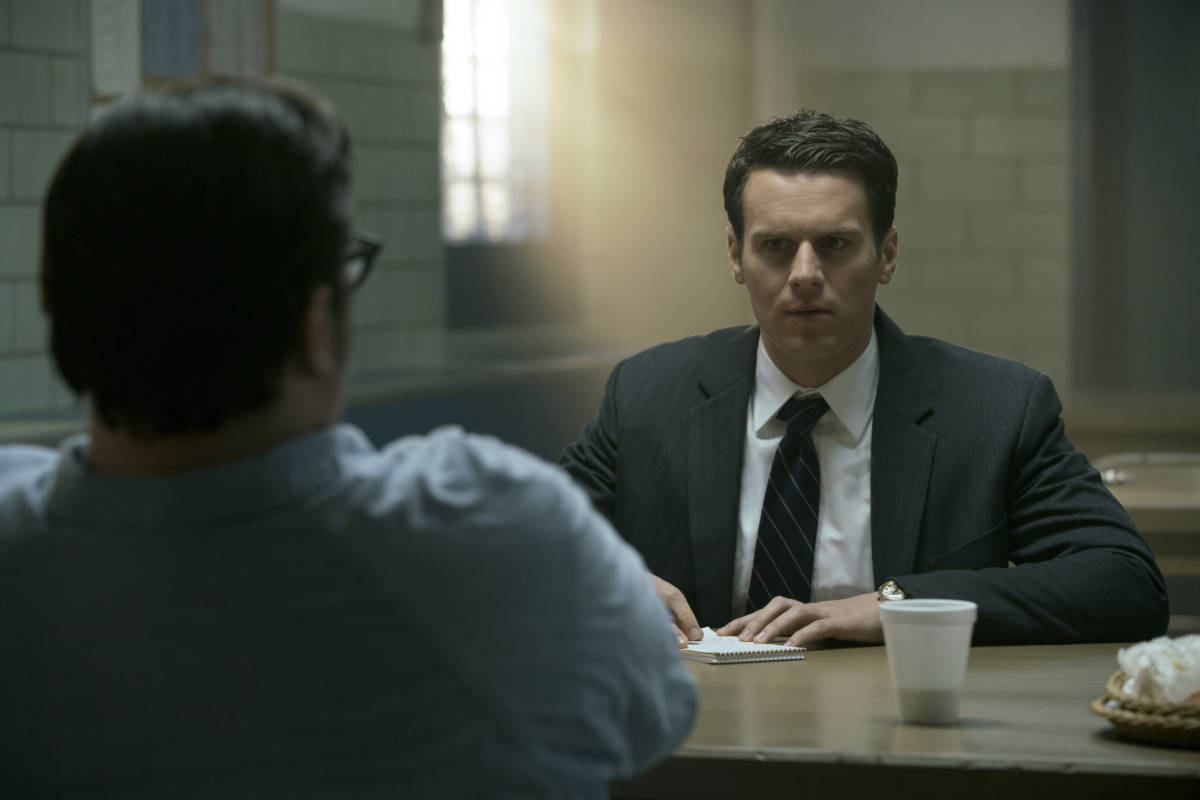 Mindhunter, the new Netflix original from David Fincher, isn’t the story of serial killers we know. There are no car chases, no last-minute realisations, and little guts or violence (at least onscreen). Fincher invites us to take things at the much slower and more intimate pace of Holden Ford (based on real-life FBI detective John Douglas), an FBI detective determined to study some of America’s worst violent offenders.

Set in 1977, Mindhunter tackles the beginnings of what we now know as criminal psychology, the rudimental developments that would go on to create the foundation for modern thought on criminal behaviours. David Fincher is no stranger to examinations of demented minds, with both Fight Club

and Gone Girl offering insights into the darker edges of human psychology – but in Mindhunter he is given space to breathe. There is a brilliant slow burn to proceedings here. Do not expect bombastic action, instead battles of wits and words.

Fincher and his team are in their element here. Editing is efficient and calculated, with episodes varying in length depending on the story they have to tell. Sound mixing leans into louder elements – there are times you’ll strain to listen in on bar conversations, only amplifying the silence of later scenes. The late 70s is captured beautifully here. Charles Manson, fashion, cars and interiors all play their part in establishing the time and place, with Fincher avoiding exposition-heavy dialogue or an over-reliance on cultural touchstones. The time period of this story simply ‘is’, without seeming forced or overemphasised. Ford’s colleagues – Bill Tench and Wendy Carr (based on Robert Ressler and Ann Burges respectively) are some of the most quietly complicated characters since True Detective. Each has their flaws and strengths, breaking points and motivations.

Holden Ford is a distinctly unique protagonist. Aloof and detached, but not for a lack of trying. He isn’t an anti-hero – quite the opposite. He works too hard and parties too little. This is brilliantly explored through his relationship with Debbie Mitford, a decidedly party-oriented girl, her intellectualism and open sexuality showing a side of women in the 70s not often explored. Bill Tench, his older colleague, offers a counterpoint to Ford’s disregard for the establishment. He is more ingrained in the system, aware of the price paid for too radical an approach in regards to an institution as glacial and micromanaged as the FBI. Carr, the most educated and forward-thinking of the three, helps both the characters and audience understand the far-reaching scale of the events unfolding before them. She is an internally rich character, full of conflict forced upon her by the time in which she lives.

From this teams work came criminal profiling, psychological help for abuse victims, pre-emptive measures and the first explicit psychoanalytical study of rapists, murderers and other violent criminals. Their meetings and recordings (many of which are now available online) went on to form new schools of thought and teaching in sociological and criminal schooling. The crux of Ford’s (and therefore Fincher’s) pursuit is to eliminate the labeling of violent criminals as ‘crazy’; instead seeking to understand them. Now-fundamental concepts are developed here – escalation behaviors, indicators of violence, ways of cataloging and organising violent offenders. Those first tentative steps towards prevention are laid here. It is fascinating to watch. This team coined the term ‘serial killer’, now so ubiquitous it seems perverse to imagine a time before it.

Edmund Kemper (the coed killer), Monte Rissell, Jerry Brudos, Richard Speck and Dennis Rader (the BTK killer) all make appearances in varying degrees throughout the ten episodes. And never is the cardinal sin committed of making these men out to be anything more than they are – broken and deranged, yes, but men nonetheless. Most of them are distinctly disagreeable – violent, coarse. It would be easy to see them as nothing more. Ford still sees these people for the criminals they are, but “monsters”? Far too simple an answer for so complex an issue. The fact that Ted Bundy was active at this time, with Jeffrey Dahmer becoming active the following year, only underscores how urgently needed his work was.

Cameron Britton captures both Edmund Kemper’s physical and mental presence impeccably – Kemper stands 6 foot 9 inches tall, weighing over 250 pounds and has an IQ reportedly around 145. It is undoubtedly the performance of the show. Kemper is calm, collected and approachable. He knows how to talk to Ford, the staff and other inmates; how best to push their buttons to get what he wants. Even as he is cuffed and tied, he seems to control the room. He seems as sane as anyone else – until you’re reminded of his crimes. Kemper killed 10 people, including his own mother. He committed both necrophilia and cannibalism. Yet here he is, as outwardly sane as anyone else. That is what terrifies us the most – that an intelligent, seemingly well-balanced person can be so internally heinous.

and Robert Bachman’s Rage, the latter pulled from shelves in light of the 1999 Columbine shootings. America, and the world at large, have ‘woken up’ to dangers we scarcely could have imagined 100 years ago. Jack the Ripper, the Black Dahlia murder and many others were heinous, yes, but the work done by Ford’s team is what turned them into something tangible, trackable. Modern estimates suppose there are anywhere between 35 and 50 serial killers active in the United States at any given time.

Mindhunter is easily the best Netflix original since Stranger Things. It is unapologetically fastidious – no hand-holding, no details skipped or squeamish facts avoided. Serial killer obsessives will have a field day (I marathoned all ten episodes in two sessions). If you’ve been waiting for the next big thing, here it is. Mindhunter is intelligent, terrifying and unmissable.

The basis for the series, John Douglas’ action-biography Mindhunter – a look back on Douglas’ years in the FBI’s serial crime unit – is available from all reputable retailers