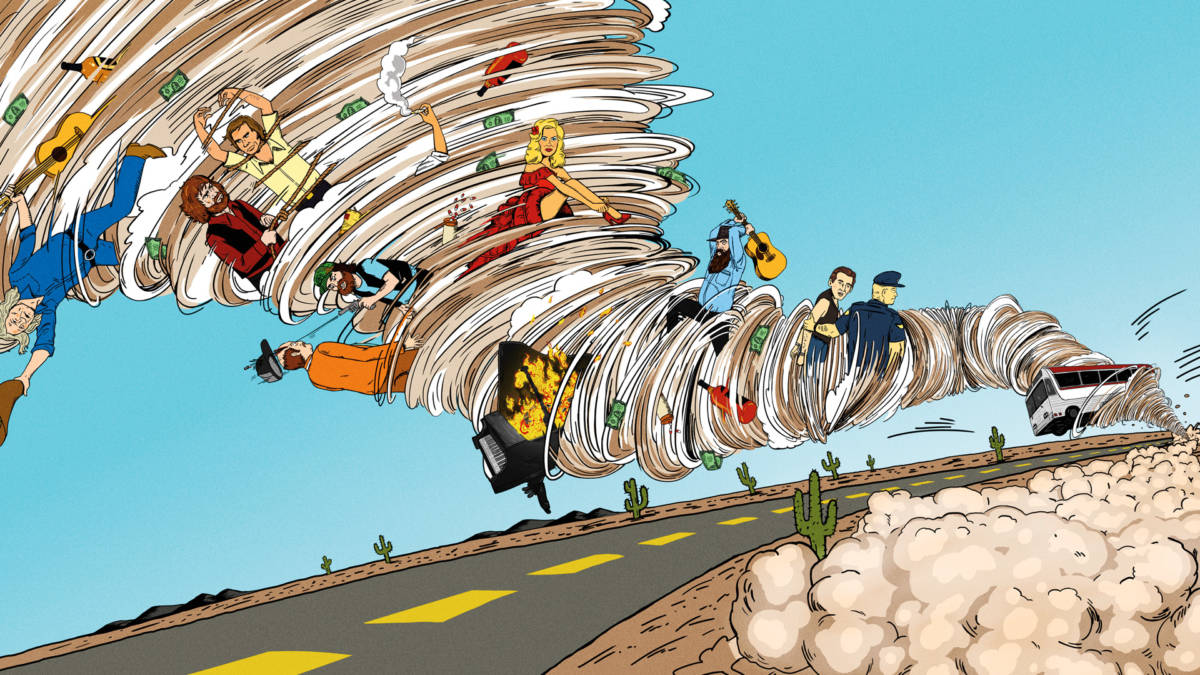 Mike Judge knows that you don’t like country music. He says as much in the intro to Tales of the Tour Bus, his animated music documentary series that finished its eight episode run on Cinemax last Friday.

“You think it’s corny and twangy and kind of stupid,” he says. “Well, you could be right, but it’s always good to keep an open mind.”

The truth is, it doesn’t really matter whether you like the music or not. The show is constantly smart, funny, and inventive enough to keep even the haters enthralled. Because hey, who doesn’t like a good road story?

Every week, the show gathered friends, family and colleagues of beloved or under-appreciated country music star, and gave them the opportunity to recount the craziest, juiciest stories they have on them.

Judge’s humor has always come from the peculiarities of people. There aren’t too many absurd “comedy writer” jokes in his work. No parody, or hackneyed plots, just well-developed characters, because funny characters are funny characters, no matter what situation you put them in. That’s been the case with his hit shows Silicon Valley, King of the Hill, and Beavis & Butthead, as well as the cult favorite Office Space.

I’m happy to see this trend continue as Judge tries his hand at documentary for the first time.

While the series does highlight the humorous personality traits of the country stars at hand in his typical fashion, it also brings out the personalities of the “talking heads” gathered to reminisce about them. Since there is so much crossover between the artists, many these people are involved in several episodes. After just a few episodes, you’ll find yourself thinking, “Awesome, Kinky Friedman’s in this episode,” or “I hope Billy Joe Shaver makes an appearance in this one, too.” Gradually, these people become memorable characters themselves.

It’s pretty unique to see a fully animated documentary on television, which is surprising, given how well it seems to work. The show animates the “tales,” in a style that should be somewhat familiar to fans of Judge’s previous work. The interviews themselves are actually animated, too, albeit with a different look. Here, the interviewees look to be digitally rotoscoped, sort of like in Richard Linklater’s Waking Life, though thankfully less jarring.

The ability to make cartoons out of these stories, rather than simply cutting in a bunch of photos and live footage (which is done here, but sparingly), is the key to making the show work, even despite the fact that it’s, well, ugly. At least a little. This is a complaint that has come up about Judge’s animated work a lot. One which I strongly disagree with, most of the time. I think both Beavis & Butthead and King of the Hill have a brilliant sense of design and visual depth. Here, however, the cheaper budgets and tighter schedule are on full display. Network TV, this is not. Judge, an accomplished visual director, is able to mask these shortcomings in the animation with clever framing and unique stylistic decisions.

It was a smart decision to have these stories be very much the invention of the story teller, to the point where even the dialogue is simply lip-synched to what the interviewee is saying. Even if the facts aren’t 100% true, the stories they tell are the authentic legend, which this makes the relatively simplistic ragdoll-like animation seem appropriate. It is like a puppet-show version of the actual events. In short, it works.

The stories range from wild to melancholic, and the subjects run the gambit, from deplorable(Jerry Lee Lewis) to charmingly eccentric(Blaze Foley). It’s obvious, however, that Judge and his co-creators have a great deal of affection and reverence for these artists. Their music, at least, if not their personal lives. Some of these stories are absolutely insane. Topics include drug abuse, alcoholism, mental health, gunshot wounds, mysticism, statutory rape, and theft, and they’re told by those who were actually there. The interviewees clearly love and respect these country stars, and that saves the show from being just a cheap cheap take-down of these beloved icons.

Every episode in the short series is a whole lot of fun, but if I’d have to pick a weak spot, it’s the second Waylon Jennings episode. While Jennings is arguably the most famous performer of the bunch, and he is undeniably interesting(he crosses paths with other subjects in hilarious ways throughout the series), you could feel the pace slow down considerably in the second half. Clearly, there just wasn’t as much there to talk about.

When it’s all said and done, the show probably won’t make a country music convert out of you, but there is a good chance you’ll find a new respect for the artistry behind it. You might find occasion yourself thinking, “well, I don’t really like county, but I do like this song.”

In an interview with Rolling Stone magazine, Judge said that if he were to do another season, he would probably shift his focus to the early days of gangster rap.

“Seeing the N.W.A movie, which was great,” he said, “I know that there’s a lot of other amazing stories that I’ve heard firsthand that I think are really fascinating. I would love to do that next.”

I, for one, would love to see that happen.