Lady and the Tramp: Should Disney Rewrite its History? 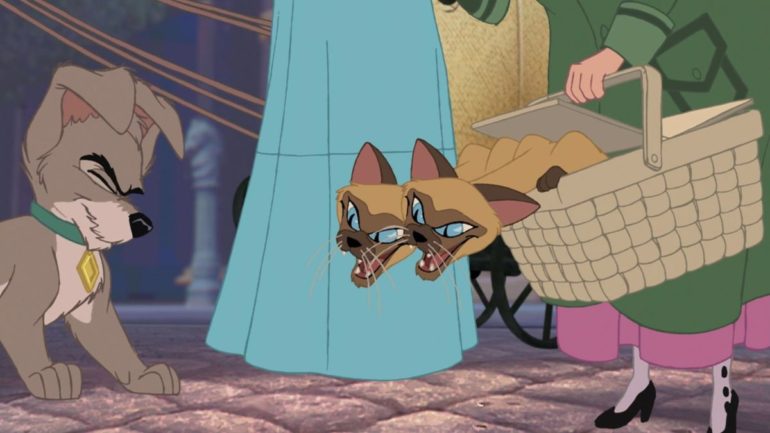 In a recent article by The Guardian, it reports Disney’s casting of Janelle Monáe in the live action remake of Lady and the Tramp. Monáe is said to be taking on a voice role, contributing two new songs to the soundtrack, as well as reinventing the Siamese Cat song from the original movie. This remake will join a host of other content on Disney’s upcoming streaming site Disney+.

Watching the original cartoon when we were younger, the derogatory racial sentiments might have flown over our heads, but it is hard to overlook them now with adult eyes. The features of the cats emphasize stereotyped Asian slant eyes and buck teeth. The cats behave abominably as well. They trash the apartment, and then turn around to blame their bad behaviour on an innocent lady. This serves to villainise the cats, focusing on their sly and cunning ways, othering them in the process. We can’t help but side with an unassuming Lady over these duplicitous pair of cats. The song, performed by Peggy Lee, has overt oriental tones as well.

This is not the first time Disney has decided to edit or delete content from its movies, in order to present a more palatable front. Other affected content includes Dumbo and Song of the South. Dumbo gets a deleted scene, but Song of the South is not in circulation anymore, despite requests for the movie to be released on DVD. Critiques of the movie are regarding the presentation of former slaves, since the main character Uncle Remus seems content to continue work on the plantation. It gives the impression that such work is idyllic when more often than not, the inverse is true.

While it might seem a more prudent choice to exclude such controversial content, a stronger choice would be to allow access to the movie, to educate current audiences about the history behind such a depiction. As mentioned in an article in The Guardian, author and Hollywood historian Cari Beauchamp says we need to see that these contentious pieces of content “do exist and they need to be put in context: when was it made? What world was it reflecting? Disney loves being praised for having princesses that are from diverse backgrounds, but you have to look at the whole history.”

Disney definitely has a better track record compared to most, and I can see why it would want to safeguard its reputation, but we need to move past this “social justice warrior” lens. We are so quick to attack or remove whatever offends us. Film and literature can’t help but be products of their time.

In Joseph Conrad’s Heart of Darkness, his main character Marlow likens African men to the beasts that dwell in the continent. Add to that the liberal use of the n-word as well as the juxtaposition of Kurtz’s African mistress’ primitive wildness against his proper white wife, and we see there is much to be offended about. However, we understand why the book is the way it is, because of the time period it comes from. This was at the peak of colonial conquest, with the British Empire focused on African colonisation and trade.

So yes, Tim Burton was right to leave the Jim Crow scene out of his recent version of Dumbo, but Disney should consider leaving it in for the original version. Education can only happen in the open, not in the silence of shame and revisionist regret.