Knockout City Could Be A Sleeper Multiplayer Hit 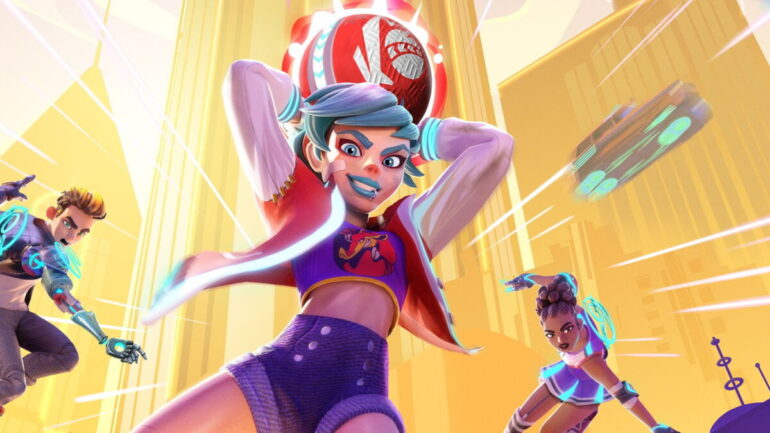 The announcement of Knockout City, for me at least, led to a lot of cautious excitement. The premise of playing a more violent version of dodgeball, which itself is about as violent as sports get without stepping into a ring or cage, as an online multiplayer game was a fun one. However, publishers EA had already waded into the unconventional multiplayer game waters before with Rocket Arena, and it felt like that game sank to the bottom before it even started.

At a surface level, Velan Studios’ offering doesn’t appear too different from all the other multiplayer games that have emerged since Overwatch, Fortnite, Rocket League and others, with plenty of big, bright colours and cartoonish characters on display. Look a little closer though, and you’ll find a game worthy of your attention, and one that I’m hoping will succeed where other multiplayer games have failed.

Knockout sees teams of three players compete in a dodgeball/deathmatch hybrid that’s incredibly fun to play. Players charge and throw balls by holding the right trigger, and can time their catches with the left trigger. Charging a throw will lock on to any valid target you can see in the vicinity, and throwing a ball will automatically home in on your chosen victim, meaning intricate and hard to achieve skill shots like you’d see in other multiplayer games aren’t really the focus here.

If anything, Knockout City is most comparable to a highly accessible fighting game, with no execution barrier to prevent high level play. The controls are simple, but there’s many strategies at play to try and dominate your opponent. Simply throwing your ball at the enemy will often lead to an easy catch, but you can click the right stick to perform a fake throw to try and bait out a catch attempt before leathering them with a fastball. You can even throw softballs against opponents who are playing at a faster speed, which can easily catch people off-guard.

It’s all mind games, which is a tenet of fighting game play. Success in Knockout City, particularly in 1v1 situations, is all about psyching out your opponent, disrupting their rhythm and outthinking them. Because the balls lock-on to their targets, good plans and a solid defense are more important than being offensive. Still, actually being in a 1v1 during a normal six player game is rare. More often than not, you’ll get a ball thrown at the back of your head for your troubles.

On top of that, there are different shot types to consider which are chosen just before you let go of the ball. Pressing the spin button before throwing will perform a curved throw, while the flip button will lead to a lob throw. These throws are also useful at mixing up your opponent who might expect another throw type, but they’re also wonderful at smacking enemies who think they’re safe behind cover.

Still, if you prefer, you can also roll yourself into a ball like Samus from Metroid and just let someone else throw you at people. Considering throwing teammates at enemies results in instant KOs, and the fact that charging one of these throws leads to a death from above explosion called an Ultimate Throw, it’s a viable strategy. When playing with friends during the beta period, one of our favourite plans was the ol’ Wolverine/Colossus Fastball Special, especially because our designated “ball” would end up with multiple MVPs for allowing themselves to be thrown.

Of course, when I tried to be the ball, results weren’t as successful.

#KnockoutCity is a fun game that I am very good at. Vid not related. #NintendoSwitch pic.twitter.com/b6jmAeyMbe

Each match also introduces a special ball of some kind, which will spawn around the map and add a little bit of extra spice to the proceedings, though not all special balls were created equal. Some are pretty interesting, like the Sniper Ball which can smack people at long range, or the Cage Ball, which forces those hit by it into ball form for a set time. Here, they can be used as a weapon against their teammates, or thrown off the map for an easy environmental KO.

While those balls are fun to use, others aren’t quite as enjoyable. The Moon Ball has useful utility, as it allows you to jump higher and it bounces hit enemies back further, but its skills are a bit too bland to stand out in comparison to other balls on offer. However, my least favourite ball is reserved for the Bomb Ball, which works exactly as you’d think it does: as soon as you pick it up, you have a limited time to throw it before it explodes. There’s some skill to be found in manipulating the countdown timer to explode near enemies, but it’s just a bit vanilla in terms of power-ups. That said, running full speed at enemies while holding a Bomb Ball is a worthwhile, panic-inducing strategy.

When all these elements come together, Knockout City offers a chaotic and thrilling multiplayer experience that’s incredibly satisfying. Being the one to turn around a team fight with some skillful defense and a well-timed special ball or Ultimate Throw is a feeling that should be bottled up and sold en masse. Just don’t get used to winning 1v3 situations though, as facing down an entire team will often lead to you getting eliminated.

This chaos, coupled with the accessibility of the controls, is perfect when you consider that Knockout City features full cross-play with PC, PlayStation, Xbox and Nintendo Switch. Playing in a party with Switch and Xbox players felt seamless, and the gameplay style of Knockout City, which again doesn’t rely on skill shots and so on, meant that no platform offered a specific competitive advantage. The Switch version might have been a bit more laggy, sure, but I was still able to keep up with other players on other platforms fairly easily. With cross-progression planned too, Knockout City could be the perfect game to carry on playing during your bathroom breaks.

While the chaos and excitement is often a good thing, sometimes it can be to the game’s detriment. A red ring will appear around the screen as a threat indicator to let you know you’re being targeted, but it can often still be hard to parse that a ball is flying at you, even when it’s straight towards you. Aspects of the gameplay formula could be refined too, with one idea potentially being players starting a match holding a ball. When rounds start, three players on the same team all rush for one ball spawn, so giving everyone a ball would remove that.

Knockout City, like other multiplayer games of its kind, features lots of customisation options, and the game’s generous contracts (challenges) ensure you’re always unlocking new features each time you level up. With the game promising 900 tiers of unlocks, plus an in-game store, you’ll have plenty of options to play with. Still, the style and particularly the faces might not be everyone. The fashion seems to be “cyberpunk meet 50s greaser”, while all the faces look like you’d expect people who get pelted in the face by high speed balls to look like.

After my initial caution about Knockout City, I left the cross-play beta feeling more hopeful about the game’s future. However, I’m still unsure if Knockout City will have the longevity to compete with other multiplayer games. It’ll certainly require a decent amount of support post-launch, with new ball types and maps for starters. We’ll have to see what the future holds for Knockout City come May 21st.