Okay, maybe not ALL is right, but still. 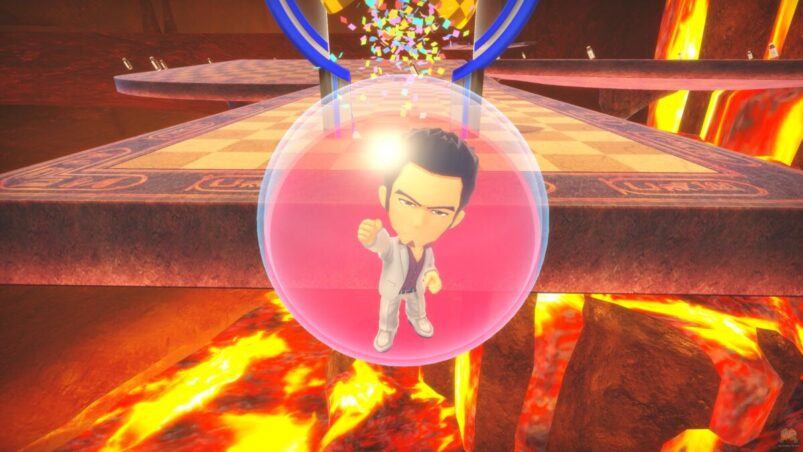 Super Monkey Ball is one of my favourite franchises in gaming. My wanky game journalist brain wants to say it’s because “it’s a pure distillation of what a video game can be, taking a simple puzzle/platformer concept and making it as fun as possible”, but the nostalgic, childlike part of my brain is still like “hehe, monkeys in balls go zoom”. Honestly, add an extra s at the end of Super Monkey Ball and I’d be giggling for hours, so it’s likely me being a bit immature.

The Super Monkey Ball series disappeared for a while, but made a resurgence two years ago with SMB: Banana Blitz, which was a HD updated version of the Wii game. It was fine, but it also added jumping and boss battles, which made some of the levels a bit less fun than the older games in the series. Those older games are now being brought back in the form of Banana Mania, which bundles the first few games together in one wonderful collection.

A collection like that alone would be enough cause for celebration, considering the first few Super Monkey Ball games are utterly joyous bundles of fun, with hundreds of exciting levels and plenty of silly minigames to boot. 1v1 on Monkey Fight, cowards. However, SEGA haven’t been content to rest on their laurels with Banana Mania, and their commitment might just be the game’s best selling point.

We’ve already spoken about how the jump feature from Banana Blitz could help players who are struggling with some of the trickier levels, along with the potential it has to revolutionise Super Monkey Ball speedrunning, but SEGA aren’t stopping there. In fact, it feels like they’ve decided to turn Super Monkey Ball into Super Smash Bros., but for simians trapped in spheres. It’s a bit of a weird comparison, but go with it.

While many were expecting just a straight laced re-do of some classic SMB, SEGA decided to go all in on the nostalgia and fan service by throwing legendary characters into the mix. Sonic was already playable in Banana Blitz, but he’s back again here and he’s brought Tails along with him. No Idris Elba-voiced Knuckles though, unfortunately. Beat from Jet Set Radio is also featured, as a reminder that Jet Set still exists, I guess, but the real star announcement so far is Yakuza’s Kazuma Kiryu.

The Dragon of Dojima himself, Kiryu has been made into a playable character for Super Monkey Ball: Banana Mania, and the footage of it is still making me laugh, all this time after it was first announced. The sight of little chibi Kiryu running around in a ball, picking up Staminan instead of bananas, is absolutely hilarious. I could genuinely believe that his appearance is some kind of elaborate Yakuza sub-story, which would just be the icing on an already wonderful cake.

Seeing Kiryu in Super Monkey Ball is worth buying the game for alone, but I’m also hoping that SEGA isn’t stopping there. As silly as it might be, there’s a potential here for Super Monkey Ball to become the catalyst or linchpin for a SEGA themed version of Smash Bros., in the sense that it’s more than a game, but a celebration of everything in SEGA’s history, kind of like Sonic & SEGA All-Stars Racing. It’s a statement on how much the Yakuza series has become a cornerstone of SEGA’s brand identity, but there’s more history to pull from, and I’d love to see it.

If SEGA were willing, we could see the door open for vintage SEGA characters like Ulala from Space Channel 5, or Amigo from Samba de Amigo. Sure, they’re mascot characters that only get trotted out for those big collaborations, but why not lean into that for Super Monkey Ball and make it even more special? Banana Mania is already a massive nostalgia pop, so let’s carry that feeling on with more legendary characters. Heck, Kiryu proves they don’t need to be nostalgic. Throw Joker from Persona in there for the hell of it. Why not?

Super Monkey Ball: Banana Mania is shaping up to be not only an incredible collection of a brilliant video game series, but a full-on celebration of one of the most iconic video game companies in history. Seeing Kiryu as part of it is brilliant, and I hope it’s indicative of even more to come before the game launches on October 5th for PC, PS4, PS5, Xbox One, Xbox Series X | S, and Switch.