Iron Danger won’t change your world, but it’s a wholly interesting game that may appeal to dungeon crawling fans. 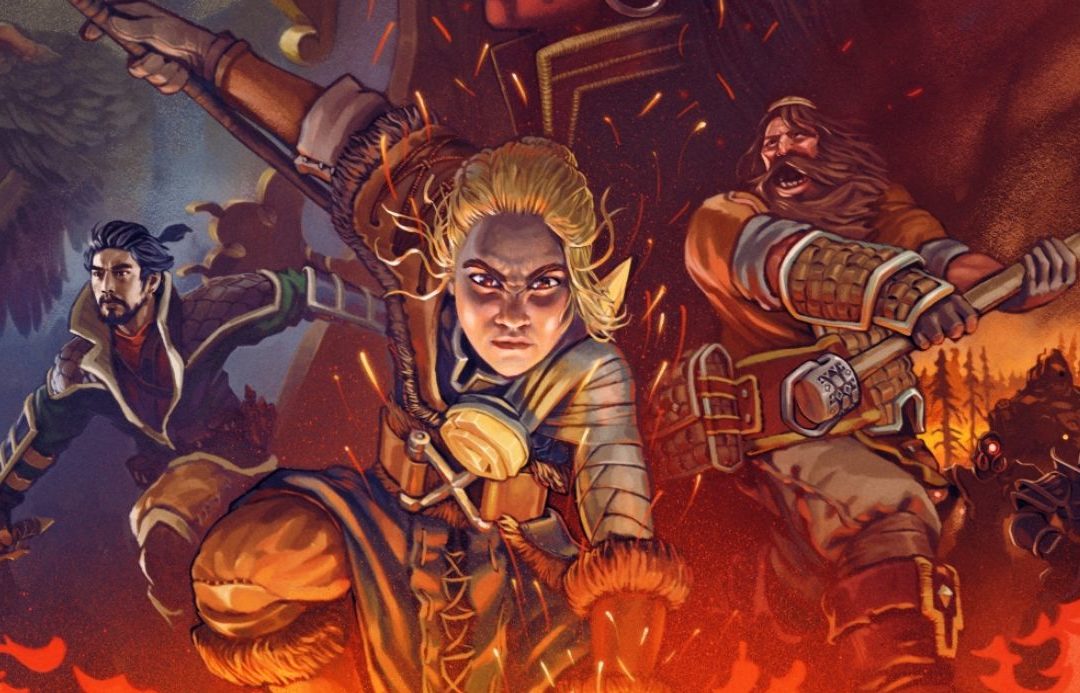 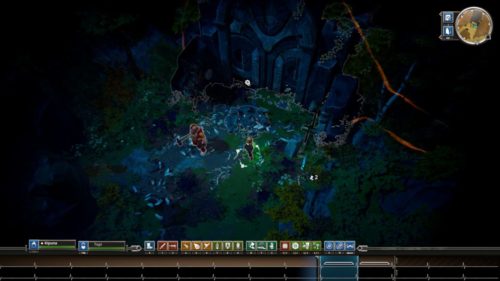 It’s possible for me to play a game and instantly fall in love with it. It’s also possible to play a game for hours, for something to just click into place and make it a personal classic. Then there are some games that seem to occupy this mid-ground, games that I enjoy, but I’m not sure whether I really like them or not. Iron Danger falls into this category, and I’ve struggled to work out how I feel about it.

On paper, Iron Danger is the perfect game for me. It ticks all the boxes: small team indie game, unique premise, quirky artstyle, but there’s something that just doesn’t stick right, something that stops Iron Danger being as good as it could be.

Iron Danger is a game heavily inspired by Finnish folklore. You take the role of Kipuna, who is granted ancient time control powers after falling into a sinkhole and becoming impaled by a mysterious crystal shard.

Àfter surviving an attack on her hometown of Kalevala, she finds herself at the heart of a war between the people of Kalevala and the Northlanders, led by the evil witch queen, Lowhee. Your adventure is separated into different levels, which can be tackled in a variety of ways. Prefer stealthy or shouting and screaming? Both are valid. Some levels can even be tackled by avoiding combat altogether.

Taking a look at Iron Danger, you might be forgiven for thinking that it is just another isometric dungeon crawler, and that is how the game plays — at least initially. Moving around the world is a simple case of clicking to move your character to where they need to go. Don’t worry about the huge amounts of icons along the bottom of the screen, they don’t come in until combat.

Iron Danger has a key feature that other dungeon crawlers generally don’t have, the ability to rewind time. It’s the main gimmick of the title, but not a gimmick in a negative sense. When combat is initiated, it is done so in the form of turn-based combat. The turns take the form of ‘heartbeats’, and each action takes a certain number of these. The turn based-combat is different to usual turn based RPGs: when you move, time moves, a la SUPERHOT.

A bar along the bottom of your screen shows these heartbeats, and it also gives you information about what is going on during them. For instance, blocking, moving, attacking or being attacked are all represented here. Let’s say you get hit by an enemy, you just have to find the attack on the heartbeat bar, and click on a heartbeat prior to the attack. Now that you know when the attack is going to hit, you can block (or dodge) on that heartbeat to avoid the attack ahead of time.

It all sounds very simple, and it is. It really empowers you as a player, and makes you feel like a sword wielding John Wick, but things never stay simple. As you progress, you’ll find yourself fighting larger groups, and controlling more than one playable character, and this becomes a bit of a concentration nightmare, and it’s often the design of these fights that can make issues worse.

Many games that employ a turn based fight system limit you to fighting a limited number of enemies in one engagement. The issue with Iron Danger is that the battles take place in the confines of the level and should you accidentally stumble too close to another set of enemies, you’ll wind up fighting them as well. Fighting even two enemies is stressful enough, triggering six of them is a nightmare.

There feels as though there should be a system to beat each encounter in Iron Danger, as each fight can often be more like a puzzle than a fight. Figuring out when to block, move or fight is important and the game comes across a little like a tactical puzzler. This isn’t the case though, as the AI often feels a little unpredictable. On the one hand, it creates more of a challenge, but on the other, the lack of consistency is a little frustrating.

The AI often can also be tricked. There were a number of occasions where I could lead enemies around a level with one character, and have another character just out of the way firing fireballs at them. I was able to beat an entire boss with this method. This, teamed with the unpredictable AI, makes each level feel like a case of trial and error. This fact is a little more frustrating when you consider that you aren’t able to save mid-level — sometimes a level restart is the only way to correct mistakes.

Characters have various abilities that they can use during fights, ranging from the pretty simple such as fireball or strike, which speak for themselves, right up to more complex moves. In the early stages, one character can enchant weapons to do fire damage, another can unlock earthquake, which causes damage to enemies in a nearby radius.

Other abilities such as dodge, block, healing or throwing weapons can be employed too, with every ability having its own cool down period. At the end of each level, there is a chance to level up. You are able to unlock new moves and upgrade old ones.

One minor issue I found was that I took damage at the end of a fight, just as I killed the final enemy, and ended the encounter. However, I wasn’t able to reverse time to before I took the damage, meaning that I had to instead use up health items. Not a major upset, but a minor niggle.

Graphics are, overall, pretty good, probably slightly above par when compared with the likes of Diablo 3 and Torchlight 2 — they’re colourful, bold and very well designed. The whole world has a steampunk fantasy aesthetic which works very well. The soundtrack is probably the best aspect of the game, managing to add atmosphere and a sense of setting.

The voiceover work can leave a little to be desired at times, though. It veers from pretty standard fantasy voice work right over into over-the-top cliche territory. While it’s no deal breaker at all, I really feel that some of the characters come across distractingly out of place in the game’s world. If they ever add an option to play in traditional Finnish with English subtitles, I’d check it out.

While the heartbeat based combat is the game’s key feature, it also manages to be its greatest weakness. It has a steep learning curve and took me several attempts to even play the game to a decent standard, let alone ‘git gud’ at it. But once I got to grips with the multiple characters on screen, all while pushing time back and forward, I actually found beating the levels extremely satisfying.

Iron Danger isn’t perfect, nor is it the best dungeon crawler out there, but it is incredibly unique. Sure, time reversal isn’t exactly a new feature in gaming, but Iron Danger’s take on it feels fresh and very different to anything out on the market right now. That fact alone makes it worth a purchase, especially if you crave something new. 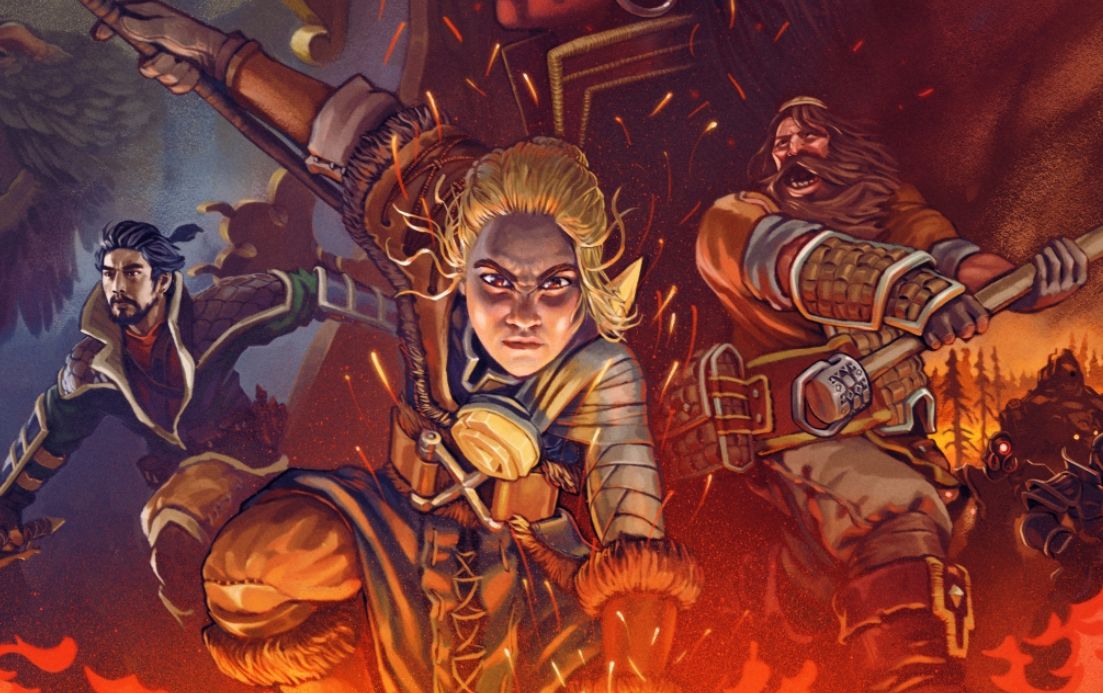