INTERVIEW: Becky Chambers, Author of The Long Way to a Small, Angry Planet

On Wednesday 26th, the celebrated author of the sci-fi novel ‘The Long Way to a Small, Angry Planet’, Becky Chambers, made an appearance at Birmingham Waterstones as part of her UK-wide book tour.

The Long Way, which was originally self published by Chambers and later picked up by UK publishing house Hodder & Stoughton, was released in 2014 to acclaim from both within the industry and without.

At the event, Chambers, who was born in California, discussed her influences, including TV classics such as Star Wars and Farscape, as well as her time as a video game columnist at The Mary Sue.

The Long Way was applauded for its treatment of LGBT and gender issues, as well as for its vast world and three-dimensional cast of characters.

Chambers also revealed that she is currently working on the third book in the Wayfarers series, following on from the latest release A Closed and Common Orbit, which hit shelves earlier this month.

How did it all start?
I started writing The Long Way to a Small Angry Planet back in 2012. I was also working as a freelancer at the time.

The regular paying work I relied on dried up, and I had to make a decision between giving up on the book so I could focus on work, or pushing on and finishing it. I didn’t want to stop working on the book, so I started a Kickstarter to fund me for a couple of months so I could get it finished, proofread and out to publishers.
As it turned out, there were quite a few people out there who didn’t want me to stop either, and I raised enough money to allow me to keep going. I got an agent and started sending it out on submission.

However, soon after my agent got a new job and I went back to square one, so instead I decided to self publish it in 2014.

A few months later, I got a call from someone I had met at WorldCon in London, who as it turned out was an editor at Hodder & Stoughton, and they said they would love to pick it up.

When The Long Way was picked up by Hodder and Stoughton, did they ask for any changes?
Hodder and Stoughton didn’t want any changes making and it went straight into proofreading and Anglicisation, as we Americans tend to use fewer vowels. Funny thing is, I write in American English and it’s ‘translated’ into British English for release in the UK, then when it’s released under Harper Voyager in the US it’s translated back into US English.

Do you have an agent?
Nope. I am flying solo. I think agents are great and have a lot of fantastic connections which makes them a useful thing to have, as they know the right people to speak to, but I don’t have one.

What would you say were the biggest influences on your writing?
Star Trek: The Next Generation came out when I was 3 and it became a huge part of my life, and I think that definitely shows. I can also talk about Farscape for hours.

One of my biggest influences is Carl Sagan, and there’s a lot of theory regarding wormholes which made its way into my books. I come from a science background by proxy, as my mother is an astrobiologist, and a lot of the science in the Wayfarers universe comes from her; I actually had to tone it down in some places as I wanted it to be accessible for everyone.

I remember once I called her in a total panic because I couldn’t figure something out, and she tried her best to explain it to me. In the end, she said ‘go and get some Play-Doh and we’ll figure it out that way’.

Do you support readers who go on to write fan-fic or draw fan art?
Yes! It is the biggest compliment when people tell me they’ve written fan-fic with my characters. I especially love to see fan-art because a lot of it is just amazing.

However, I do ask that whilst I totally support fan-fic writers, they don’t send me anything they write. It’s not that I don’t want to read it, it’s just that it can bring up a whole bunch of gnarly legal issues regarding plagiarism. 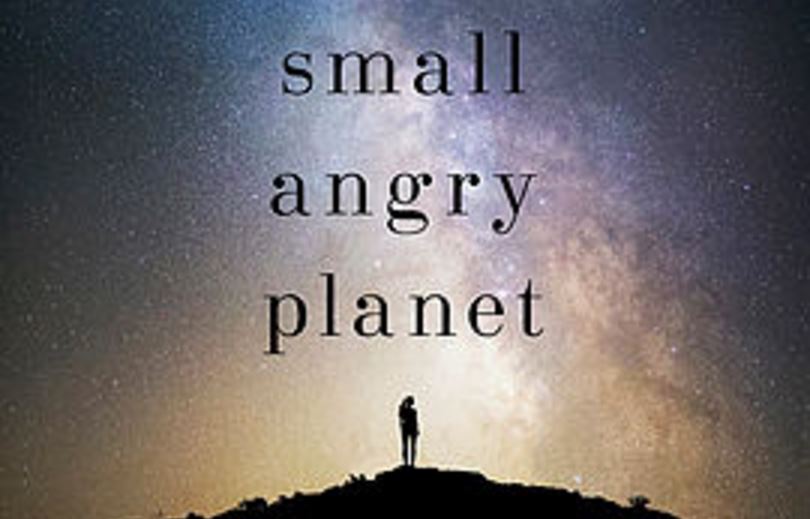 One thing I’m actually terrified of is something called cryptomnesia, which is when an idea you’ve heard before comes back to you without context, and even though you think it’s something new, you actually got it from somewhere else.

So, write as much fan-fic as you like, just don’t send it to me!

Have you ever written fan-fic yourself?
Yes… (laughs)

What was it about?
Oh gosh. I wrote a lot of Sailor Moon fanfic in my younger days. I have one piece leftover and I can barely get two sentences into it because it’s so embarrassing. I thought I was the coolest back then, though.

I also used to do a lot of simming, which was kind of like roleplaying, where you’d join a group in a specific universe, invent a character and write as that character; it was kind of like a game of roleplay Tag.

I’ve never actually told anyone this, but a few years ago I was part of a Star Trek simming group where I played a First Officer in Starfleet. I met someone who was playing a Chief of Security, and she actually became my wife in real life! When people ask I just tell them we met online…

Who is your favourite character in The Long Way?
I would have to say Sissix, and I think she’s a popular choice. She was actually the first character I wrote for The Long Way. I was world-building, kind of inventing all these alien races and Sissix appeared. The rest of the characters kind of spiralled from her.

Are any of your characters based on people you know in real life?
Kizzy is based on someone I used to know, who wasn’t an engineer but an artist.

I knew Wayfarer needed an engineer, but I didn’t want one of these Starfleet professionals who could rewrite the book on engineering, I wanted someone who maybe failed their test the first time round. My thinking was, if everything was exploding, who is the last person you’d want fixing it? The answer was this person, and that’s where Kizzy came from.

There are some elements of people from my life in other characters like Corbin, who is partially based on a… difficult… former colleague of mine, but Kizzy is the only one who is almost exactly who she was based on.

One thing I noticed when I was reading The Long Way is that it’s very episodic, was that intentional?
When I was writing The Long Way, it kind of happened over the course of a few years, and what I actually had was a series of separate adventures and stories which included these same characters. It took me a while to realise what I was actually writing was a road trip, and I ran with it.

I think the book would definitely lend itself to TV. Is there any movement on that?
I think that would be awesome. There’s no news regarding anything like that at the minute, though.

Is there any advice you can give to budding writers?
I have something called the cello analogy. There’s this cellist I know who is always taking the utmost care of her instrument. She makes sure it’s clean, books a seat for it on flights because the hold is too cold and will warp the strings, that kind of thing. Any writer needs to remember that they are their instrument, and they need to take care of themselves in exactly the same way.

There’s this idealistic view that you’ll be able to sit down and work through the night, but sometimes that just doesn’t happen, and that’s OK. Don’t be too hard on yourself.

As a woman writing sci-fi, do you think the genre is more difficult for women to access?
I can’t speak for anyone else because I only have my experience, but my experience has been really positive. My editor is a woman, so that helps, and my audience is fantastic.

What’s the best compliment you’ve ever received?
One person I spoke to told me they picked up The Long Way shortly after their father had passed away. They said it helped them to escape, to take their mind off things, and that it really helped them. That actually made me really emotional, and it still does.

And the worst insult?
One guy sent me a really long message telling me just how much he hated The Long Way. He even said that he was going to build a time machine, go back in time and stop me from writing it. I mean, by all means critique the book, but definitely don’t go around… you know, threatening to kill people’s grandparents in the past.

What did he hate about it?
Erm. Everything.

Like The Long Way though, I wanted to make sure these characters were accessible to everyone, like the crew of the Wayfarer aren’t heroes, they’re just doing a job. I love heroic characters, but I find it difficult to connect with them because I’m a total coward.

Will we see more of the Wayfarers universe in future?
Yes… I’m working on something right now, and there’s so many other stories that I want to tell, so you’ll definitely be seeing something soon.

The Long Way to a Small, Angry Planet

and A Closed and Common Orbit

are out now, published by Hodder & Stoughton.