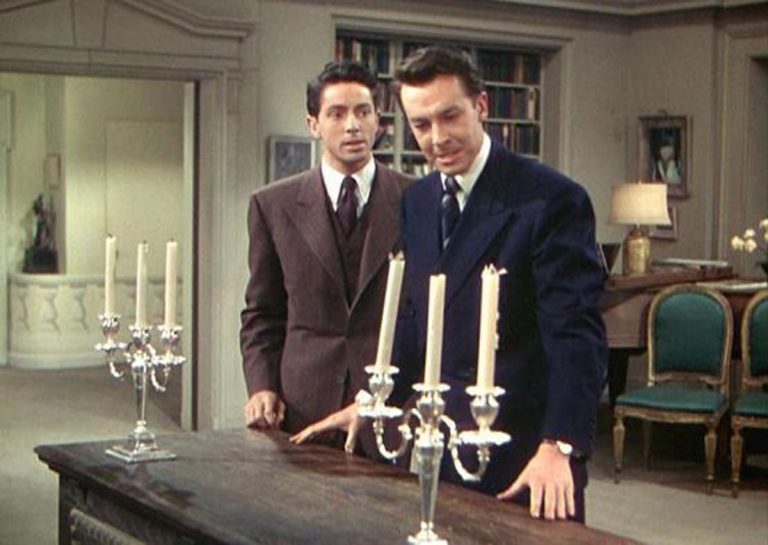 When you watch Alfred Hitchcock’s 1948 movie Rope, it’s immediately striking how experimental it is, especially for a director that is such a household name. Taking more than a little inspiration from theatre, the story is based on a 1929 play of the same name. Even more interestingly, Rope is shot in such a way that it appears to be shot in one fluid, continuous take. Of course, it isn’t shot in just one take, but a series of 10 minute shots and clever cuts. They allow them to sneakily change the backdrop outside the window to darken the scene and create an illusion of the passage of time

Filmed more than 25 years before the invention of the steadicam, the film had to rely on camera dollies, the camera mounted on heavy tracks. As such, the crew required an army of stagehands to move the set around as and when was needed. Thanks to this insane attention to detail by Hitchcock, the film’s constant camera pans look impressively slick and fluid, even more so when you consider it’s around 65 years old.

Set exclusively in one apartment, Rope centres around two flatmates, Brandon (John Dall) and Philip (Farley Granger) who kill their friend David (Dick Hogan) by strangling him and stashing his body in a chest. Rather than any ill will towards the deceased, the pair murder him out of a desire to commit the ‘perfect’ murder. Brandon is filled with a sneering arrogance, and it quickly becomes plain that he’s the orchestrator, while Philip deals with their crime with trepidation. The dialogue and body language exchanged between the pair seems to hint at an emotionally abusive sexual relationship, with Brandon even raising a hand to strike Philip at one stage.

Despite Philip’s protests, Brandon decides to hold a party, inviting friends and family of the deceased, including his girlfriend and his father. He also decides to use the chest where David’s body lies as a table to serve the guests, further exemplifying his arrogance. Brandon’s arrogance gives way to flashes of sociopathy, as his penchant for manipulating people to his own amusement becomes clear. Not only does he invite the deceased’s family to the party, but also two former lovers seemingly for his own amusement at watching their uncomfortable exchanges.

The character Rupert, played by long-time Hitchcock collaborator James Stewart, enters the fray as the party is getting into full swing. He assumes the de facto ‘detective’ role, essentially transforming the film into a murder mystery flipped on its head. Rather than following the crime-fighter, we follow murderers, and the tension of whether or not they’ll be found out. Indeed, the camera frequently pans over to the chest, brief reminders of the situation the primary characters are in.

Rupert’s suspicions are aroused when all of David’s friends are present, but not the man himself. He takes it upon himself to begin questioning the revelers, and notices that Philip especially is acting suspiciously. Philip’s remorse worsens throughout the film, and becomes increasingly evident in his mannerisms as he gets more and more drunk.  A particularly tense scene occurs in which Rupert quizzes Philip while he’s playing the piano; he speeds up and gets more frantic as the accusations begin to cut closer to the bone.

In the end, it’s Philip’s very plain discomfort with the situation that essentially gives the game away, and as Rope reaches its climax you really start to feel sorry for him. Despite the fact that, yes, he is complicit in a murder, you begin to get the feeling he’s been coerced into it by the sociopathic Brandon. This lends further credence to the theory that Brandon is his emotionally abusive lover, as it would provide motivation for him to carry out a crime he is clearly so uncomfortable with.

Eventually Jimmy Stewart’s gruff detective figures out the grisly crime, and goes into a long-winded American Dream-esque rant before leaving the perpetrators’ fates to the hands of society. While it’s a little clichéd now, it does make sense for its time.

If nothing else, Rope is a unique film. Especially by today’s standards, the story is not exactly groundbreaking, but the directorial execution by Hitchcock is sublime. The ‘single shot’ illusion is executed very well, and the film’s smooth panning shots are impressive considering when it was made and how small the set is. The relationship between the two principal characters is also absolutely fascinating, thanks to their starkly different reactions to the crime, and their potential motives for doing so. It’s perhaps a little outdated in its dialogue, but there’s still more than enough there to leave any cinema fan satisfied.