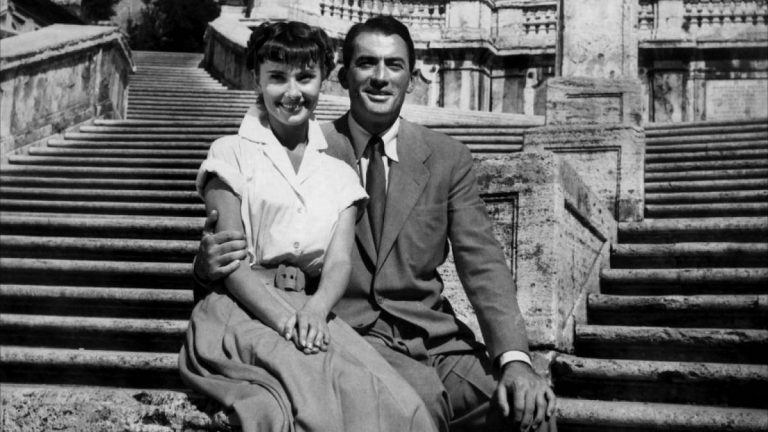 Prior to Roman Holiday being released in 1953, Audrey Hepburn was not particularly well-known. However, people who understood the indefinable charm and charisma that seems to come naturally to those who are destined to be movie stars looked at Hepburn, and knew that it was only a matter of time before the waking world fell hopelessly in love with her.

Gregory Peck knew. After working with Hepburn on the film that would turn her into a superstar, Peck insisted her name be featured next to his above the title. Given that his contract guaranteed him solo star billing, he was not required to make this suggestion. It can be said that Peck was an extremely gracious star in his time, and there is a lot of evidence to point to that. Even so, he wasn’t stupid. Peck understood that anyone who saw Roman Holiday was going to walk away from the film feeling as though they had been a fan of Audrey Hepburn for years. The movie was after all centered on her character, and Peck may not have wanted to take top billing all for himself, feeling perhaps that such an act would make him look small.

Whatever his true motivation might have been, it was a move that made sense almost immediately upon release. Roman Holiday transformed Hepburn’s career. It was enormously successful in its time, and it continues to be a beloved film to this day.

Why is this case? Movies along the lines of Roman Holiday represent one of the most enduring subgenres of film in existence. When you explain the plot of Roman Holiday to someone who has never seen it, and you leave out the fact that it stars Gregory Peck and Audrey Hepburn, they’re only going to get excited about the film, if that’s the kind of story they like in the first place. The story of a newspaper reporter accidently coming across a princess who is in Rome on a goodwill tour, who in turn has escaped from her family and handlers to experience one of the most romantic cities in the world on her own, is not a heavyweight by any means. As a flight of fancy, perhaps, but Roman Holiday is still the kind of movie that people have been making for decades. Two people mired in circumstances they don’t care for get an opportunity to break away from their respective routines, if only for a little while. They connect through sheer happenstance, fall in love, and either stay together, or part reluctantly at the very end. They will have memories that will retain their vibrancy for the rest of their lives, and they are probably better people for having had these magical shared experiences.

Right, it does sound pretty familiar, so it begs the question once again: Why does Roman Holiday continue to appeal to audiences of varying ages and backgrounds? The answer, of course, involves the two stars. Roman Holiday tells its story very, very well, and it tells it with the grandeur and breathless escapism that even the most casual imagery of Rome is capable of evoking. Everything about Roman Holiday is done well, and there isn’t even very much about the movie that feels dated.

All of this is true. However, it is also true that without Gregory Peck and, most of all, without Audrey Hepburn, this movie would not have the recognition it still enjoys to this day. These people were movie stars in the purest, most romanticized sense of the concept. They were also exceptionally good at their craft. At least, they were better at it than the credit they sometimes receive from those who cannot separate them from movie star imagery.

One talent both of them shared, which very distinctly comes to life during Roman Holiday, was their capacity for chemistry. Their respective careers offer up numerous examples of their potential to be matched up with almost anyone, and create the sparks necessary to draw the audience in. When either of them had someone who was just as special in their energies as a performer as they were, the results were nothing short of spectacular. Roman Holiday is a great example of that. Two figures who were intriguing enough on their own, coming together, and managing a type of cinematic chemistry that can forgive virtually any other sins to be found in the movie. Thankfully, the sins of Roman Holiday are virtually non-existent.

Roman Holiday is one ridiculous coincidence after another. It is also two of the greats of American film assuming a relationship that feels so natural, it is slightly surprising that they didn’t actually get together in real life. Watch the famous Mouth of Truth scene, which Peck supposedly did without ever telling Hepburn. The scooter ride through Rome is another highlight of their on-screen harmony being so appealing, it’s hard to imagine a cynic maintaining their pessimism all the way through.

Then again, Peck and Hepburn were both magnificent at establishing a means of relatable entry for an audience with even the most far-fetched stories. Roman Holiday certainly qualifies as far-fetched, but very few people are going to dwell on that fact throughout. The film does not charm on reputation alone. That’s stupid. It continues to win people over, simply because it is a sweet, straightforward fantasy, and because it features two marvelous actors against a stunning Rome scene. It should come as no surprise that Hepburn won Best Actress for her work here, or that Edith Head won for Best Costume Design-Black and White. Hepburn’s wardrobe easily played a role in how effortlessly she seemed to win over audiences throughout her career, and that is very much the case with this breakthrough role.

Curiously, Peck was not nominated, but that’s not really surprising. As good as he is in Roman Holiday, and as essential as he was to the film’s winning ways with critics and audiences, this is pretty much Hepburn’s show. He knew that would be the case, when he pushed to have her name placed next to his above the title.

The movie is also notable for utilizing talents behind the camera who were amongst those who found themselves on the deplorable Hollywood blacklist of the 1940s and 50s. Most notably, famed screenwriter Dalton Trumbo contributed a great deal of meaningful material to the script that was eventually shot. Had he not been on the blacklist, he would have been the one to accept the Academy Award for Writing-Motion Picture Story Oscar. Trumbo did not receive full credit for his work until 2011.

Ties to history aside, Roman Holiday has probably maintained a position on IMDB’s Top 250 for as long as IMDB has maintained the list itself. People who have just discovered the movie are as unsurprised by this possibility, as those who have loved it for several decades. The vast majority of those who are just about to discover the film for themselves are likely going to find themselves in that camp.

Even if you are someone who detests romantic films, you are probably going to like Roman Holiday more than you will ever care to admit.

It’s okay, seriously. You’re not alone. It’s just one of those movies that gets to people in a good way more often than not, no matter how much they try to resist the way Hepburn’s dazzling smile rested so easily on the face of a brilliantly confident, intelligent actress. Same thing with Peck’s compassionate self-assurance, or his memorable, often-imitated speaking voice.

When you bring all of those qualities together, even the detractors of films like Roman Holidayare, by and large, helpless to resist.