Twenty years on, is the unashamedly vulgar Conker's Bad Fur Day actually a look back at a more innocent time? 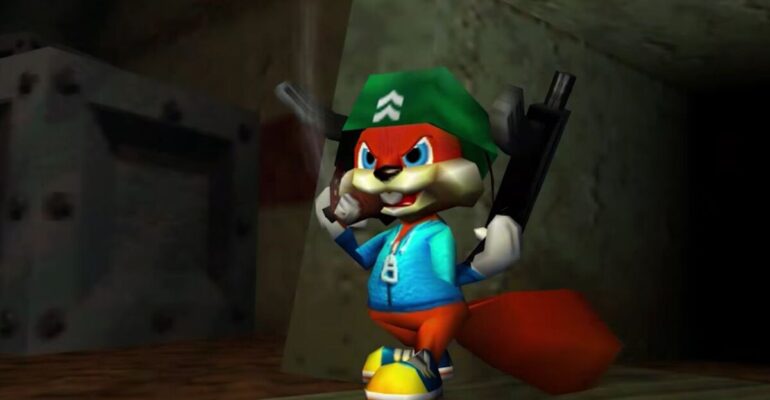 Has it really been twenty years since Conker’s Bad Fur Day came out? Because someone who was born on the day of its release would only recently have been allowed to play it. Conker was that rarest thing in gaming: a 18-rated title from Nintendo. And despite fairly limited sales, it maintains a strong cult following – not just because of the obscenity, or because it was one of Rareware’s last major Nintendo projects before they jumped ship for Microsoft (a move for which this reporter still hasn’t quite forgiven them), but because it was a genuinely memorable title.

At this point, you might expect me to go into an examination of what made Conker’s Bad Fur Day what it was, how it was a slightly fractured take on the platform game, moving between various different gameplay styles (racing, puzzle, shooter, and not to forget jumping between platforms), and why its brand of vulgar silliness is so fondly remembered. And that’s not an unreasonable expectation of an article which is meant to be about the game. So instead, I’m going to talk about Keenen Ivory Wayans’ early 2000s comedy-horror film Scary Movie.

While you’d never call Scary Movie ‘cinema’, its crude parodying of slasher flicks certainly got the 16-25 market in. The pre-credits sequence saw Carmen Electra being stabbed in the chest, only for the killer’s blade to then draw out one of her breast implants, which is a fair summation of the film’s approach to both tasteful humour and gender relations.

Nonetheless, it would give birth to four sequels, which became increasingly disinterested in the horror genre – with some of their major points of reference being War Of The Worlds (arguably scary) and Eight Mile (what? Why?). This is perhaps why the same team also spawned the other (x) Movies, like Epic Movie and Disaster Movie, both considered to be among the worst films of all time. The latter garnered fully six Golden Raspberry nominations, including one for a young Kim Kardashian for ‘worst supporting actress’.

The odd thing about Scary Movie was that it went about spoofing the slasher genre by, specifically, mimicking Scream, a film which was itself a spoof of the slasher genre. In Scream, the killer was a guy in some vaguely ghostish mask, who yammered on about Psycho and Nightmare On Elm Street – Scary Movie copied this outright, replacing the metacommentary with the more crowd-pleasing option of sex and drug gags.

(The working title of Scream was actually ‘Scary Movie’, hence “What’s your favourite scary movie?” – a line which both films used.)

In this light, it’s hard not to think that Conker’s Bad Fur Day occupies a similar role in the wider sphere of gaming. Developers Rareware were the same people behind Banjo-Kazooie, a straightforward (and memorable) platformer but one which wasn’t shy about mocking its own format. Many of the NPCs were simply inanimate objects with eyeballs pasted on, and names like Leaky the bucket. The collectibles, harking after Mario 64’s already vague power stars, were golden jigsaw pieces – because, it seemed, why not? It’s a hair away from going around collecting magical golden MacGuffins.

And Conker stumbled merrily along the same path, with the main collectibles becoming wads of hundred-dollar-bills with, yes, cartoon eyeballs.

Like Scary Movie, it was a spoof built upon a spoof – and with only limited room left to parody the genre further, they made it mucky as well. The traditional themed platformer levels, like lava land or ice world, were joined by areas like ‘poo mountain’ and ‘war’, a fairly grim Saving Private Ryan pastiche. But where Scary Movie was grafting puerile ‘adult’ humour onto the already adult format of the slasher flick, Conker was injecting it into a cutesy platformer, usually an all-ages pursuit. It was for this reason Nintendo insisted the age rating on the box be bigger than usual, so any irate parents couldn’t say that they hadn’t been warned.

By today’s standards there’s nothing that objectionable, but that really says very little. The worst of the foul language was bleeped out, and the sexual content was either elbowed discreetly offscreen or (if you’ll pardon the term) neutered by the 64-bit graphics, so the biggest offender would be the gore. Play badly and Conker can end up decapitated, cut in two, having his skull blown apart by a sniper’s bullet, or simply falling too far and being rendered into a pile of bloodied internal organs.

Scatological content need not necessarily be ‘adult’ – in fact, of the realms of traditionally ‘adult’ content it is this which is by far the most childish, but nonetheless I’d be remiss not to mention how far Conker’s Bad Fur Day took it. I’ve already mentioned the level quite literally called ‘Poo Mountain’, the sweetcorn-flecked boss of which was ultimately flushed away. On the other side of things, urination could in some areas be used as a weapon – including in the multiplayer. One level had a bathroom section where all other weapons were disabled, and players could meet for, shall we say, pistols at dawn.

But the literally scatological is perhaps the one area where Scary Movie wasn’t pushing things far further. Having an erect penis thrust through a man’s head, ear to ear (prefacing, in a way, a similar moment from the singularly vile A Serbian Film) leaves Conker’s tenuous sexual content in the dust. Likewise a fairly graphic leg-breaking is a cut above even the bloodiest incidents of Conker’s low-resolution violence.

There were plenty of comparisons made to South Park – first of the unashamedly ‘adult’ cartoons – at the time. Which certainly dates it, but it also touches on the point that our objects of discussion, Conker, Scary Movie, South Park, were all coming out of the same turn-of-the-millennium cultural morass. And South Park is a particularly salient comparison, since as a cartoon, it’s operating in a genre that – like video games in general, and especially like Conker’s type of brightly-coloured platformer – was traditionally seen as exclusively something for children. This is why they invoked the wrath of the world’s moral guardians in a way that Scary Movie didn’t, even though that film was shamelessly pandering to the same puerile audience.

(For the sake of full disclosure, I first saw Scary Movie at around twelve, which seems like the sweet spot for its level of comedy.)

The comparisons between these works don’t begin and end at ‘they’re a bit rude’. All three were very heavy on the unsubtle reference humour that’s become almost ubiquitous in their wake. Conker and Scary Movie, as if to provide an obvious point by which to carbon-date them, both featured riffs on The Matrix’s iconic bullet-time scenes (although where in Scary Movie this just seemed weird, Conker was and remains possibly the best video game adaptation of The Matrix). And none of them were shy about leaning on the fourth wall, with Conker and Scary Movie both directly addressing their own production crew.

Either way, the level of obscenity in all of our examples seems almost quaint today, when pornography is widespread and normalised, and the PG-13 rating limits films to only using the word ‘fuck’ once, in the non-literal sense (Conker, for its part, bleeped out any term harder than ‘bastard’). South Park provides a useful gauge for our evolving standards of what is and isn’t obscene, since it’s still going and has self-evidently turned up the dial over the years, going from a matter of children cursing a bit to having Randy Marsh masturbating and screwing his way through the recent Pandemic Special.

Even video games grew a thicker hide pretty quickly: Conker came towards the end of the Nintendo 64’s lifespan, but the company’s next console, the Gamecube, seemed to take a perverse pride in featuring remastered versions of the gory Resident Evil games – and, for a while, had the chainsaw-happy fourth of the series as a much-touted exclusive.

It’s not as if games had never been at the stiff end of age ratings before – Doom and its jackbooted cousin Wolfenstein date back to the very pixelly days, not to mention sexually deranged arcade abominations like Custer’s Revenge. Neither was Conker’s Bad Fur Day a particular breakthrough in that regard, achieving fairly mediocre sales on release. But it did represent the same kind of end-of-history ‘90s values for gaming that South Park did for television and Scary Movie did for film – here, finally, are fundamentally childish works which are nevertheless 18-rated.

The footnote, then, is perhaps the most remarkable part of all. As mentioned, not long after Conker’s release, Rareware jumped ship from Nintendo to Microsoft, and in 2005 the Xbox was treated to a remastered version of Conker’s Bad Fur Day. Nintendo has always been seen as the most kiddie-friendly of the big three gaming companies – simply contrast Mario with Halo, or Splatoon with Call of Duty. But, bizarrely, the Xbox iteration of Conker was more heavily censored than the original, with even the fish-and-chippy curse ‘twat’ being obscured.

Originally the remake had been billed as completely uncensored, a road ultimately not taken during its development, which is theorised to be for fear of receiving the market-unfriendly ‘adults only’ rating. You see the same dynamic in the cinema. PG-13 releases can say fuck (once), but this kind of creep is down to the companies shunning the R rating – or, God help them, NC-17 – in order to draw a wider audience. Everyone wants the PG-13 rating, but they’re unwilling to adhere to PG-13 standards, so instead, the boundaries of what is PG-13 get redrawn.

But Conker – at least, the original – would never have tried to play that game. That oversized ‘mature audiences’ warning on the box was, after all, very much the point, encapsulating the central joke that this was a game that looked like it was for kids but was also incredibly vulgar. Perversely, Conker is nothing short of a look back at a more innocent time: a time when marrying the cutesy platformer aesthetic with profanities could still shock, constant pop-culture references were a novelty rather than standard, and the age rating actually meant something.

READ NEXT: 15 Best Viking Games of All Time