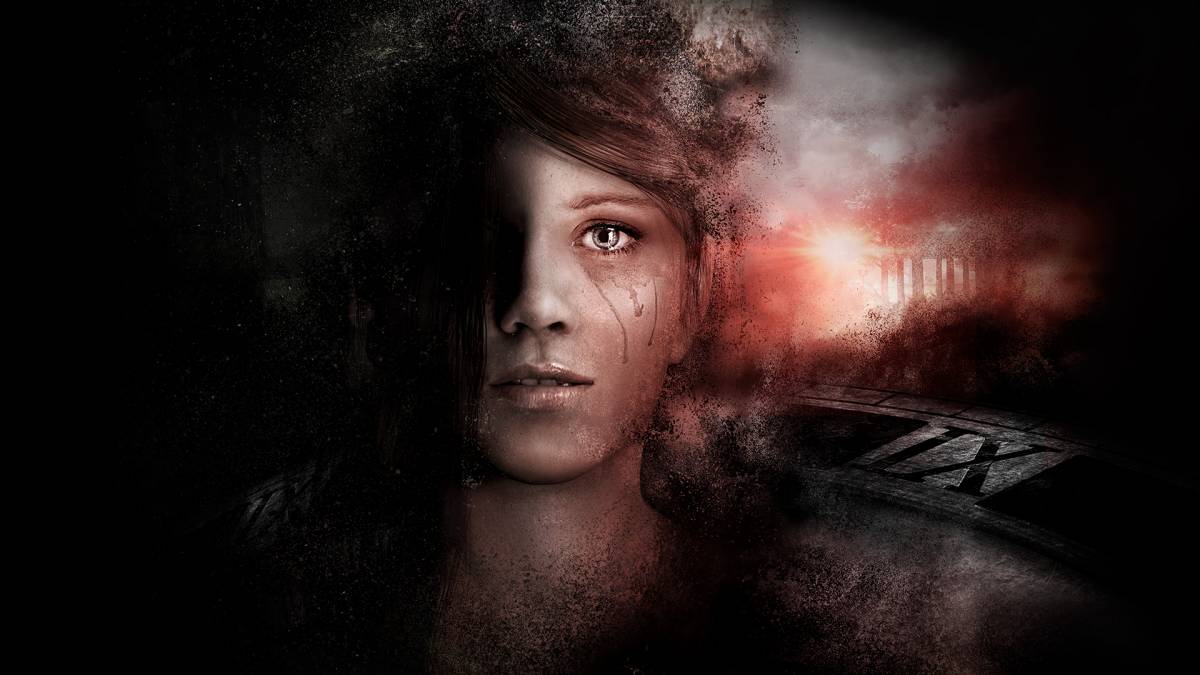 Get Even may be one of the most unusual titles I’ve ever experienced. One minute I’m crouch-walking (a bit too slowly at max speed. I’m afraid) through a creepy asylum, horrific string instruments wailing at me as nearby patients bang on things and prattle on about “THE PARTY!” incessantly. My eyes flicker between my smartphone map and scanner and the environment ahead, waiting to catch a glimpse of some new clue or threat that my phone somehow may not pick up.

After a short conversation with the enigmatic man-in-the-monitors, “Red”, some note and clue collection and maybe a hostile encounter with some poor pipe-wielding patients (.45 ACP beats pipe, sorry pal), I’m suddenly whisked away into a memory simulation where I’m now infiltrating my gruff British merc’s own past, sneaking around or engaging the other mercenaries or security as I work to uncover the truth.

The truth, though, is not simple, and neither is Get Even. While as a video game it is mechanically simplistic and honestly quite dull to play at times when you’re simply given an area to sneak or shoot your way through, it managed to keep me engrossed anyway because of its genuinely emotional and exceptionally well-executed tale of betrayal, revenge and loss. 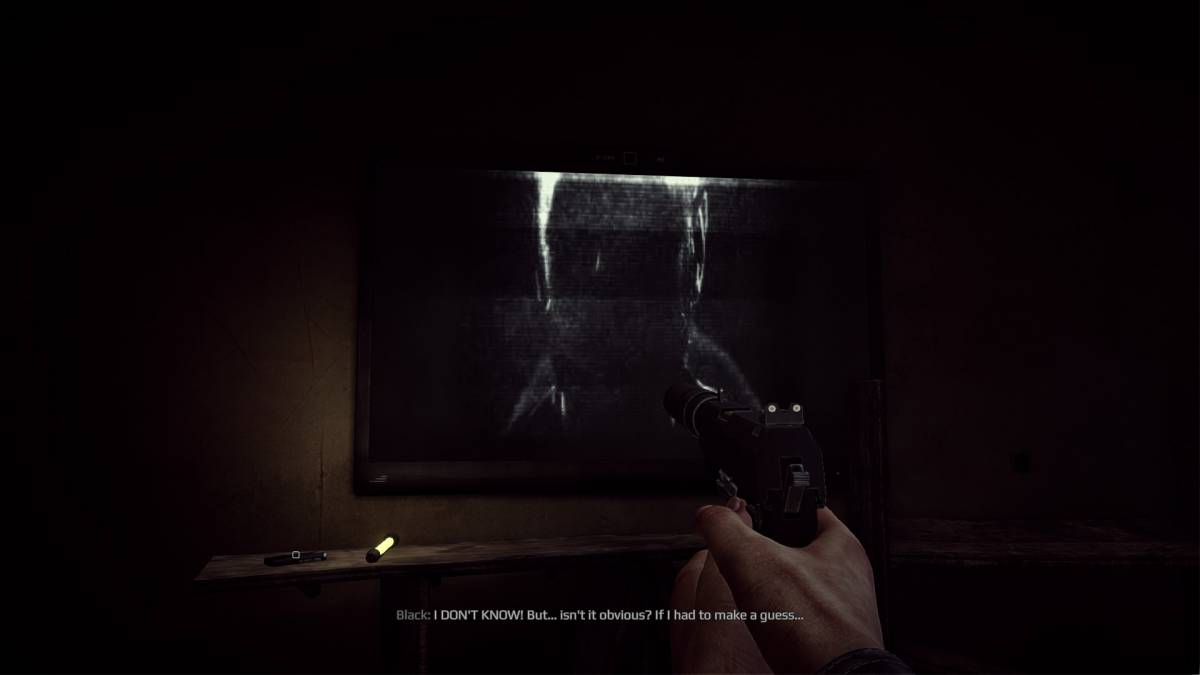 As always, I will be avoiding spoilers beyond the establishing moments of the game, but Get Even’s strongest aspect is without a doubt the tale it weaves. I refer to Get Even as a psychological thriller above, but that is to avoid giving people the wrong impression when summarizing – this is quite honestly a horror game, just not in the way pretty much any video game has ever been. Despite the presence of some classic horror tropes – the insane asylum, outlandishly and violently insane patients and macabre and dark displays of mutilation to name a few – Get Even is about what all good horror content is about; very real, core, human fears.

Beneath the crazy rambling, creepy mannequins and gun-toting mercenaries is a story about family, trust and the loss of both. The asylum and the traditional horror elements are but a backdrop, a framing device for “Red” and protagonist Cole Black’s investigation into events that involve them both in a way that the former seems to know more about than he lets on, while the latter is along for the ride.

Before long, the events of the game become mired in corporate espionage, marital infidelity and what essentially amounts to domestic terrorism. The military tech at the center of this corporate espionage also forms the bulk of the interesting gadgets and weapons available to the player; the Pandora/Savant memory exploration system is the device actually being utilized to explore these memories, and documentation exists that explains it’s in-universe purpose as a military interrogation tool and the science behind it. These scientific documents and notes are quite interesting to peruse, and are but a fraction of the clues and content that can be found by careful scouring of the environment. The amount of work that went into delving deep into the nature of memories, consciousness and dreams is commendable, and really helps with mood and immersion, two absolutely essential things for a game that rests on its story.

Fortunately for obsessive types like myself who need to check every nook and cranny for stuff like this, the levels are just open enough to encourage this behavior and hide a few nuggets better than the others while making it entirely feasible to 100% a memory or level in one pass – a relief for those who hate backtracking (also like me), though the option is there and I did find myself utilizing it occasionally. Throughout the opening of the game especially and sporadically throughout, “Red” reminds you that actions and decisions have consequences – every kill, every clue you find or miss, everything you do is being recorded and monitored and will affect the outcome of the investigation.

The conceit behind this is an interesting one – Red himself states that while “killing” people distorts and corrupts memories, he says that this can be offset by being as investigatively thorough as possible. I cannot say for sure if this was true, but I was able to progress to the end of the game without trouble despite killing lots of memory mercs and asylum patients, and I was being fairly completionist about that whole affair. This approach was a pleasant departure from most games’ black and white, restrictive approaches to curbing mook massacre, but is still unfortunately let down by some lackluster and at times piss-poor shooting mechanics – late-game shootouts can be hard to avoid thanks to the also-poor stealth gameplay, and these shootouts are fairly maddening given your extreme fragility and inaccurate weapons that lack that oomph-factor.

The combat/stealth’s sole saving grace is the CornerGun – based on the real-life CornerShot weapons system, the contraption allows you to mount your suppressed pistol, a certain assault rifle type and even a shotgun alongside your phone, which among other functions has a thermal view with a crosshair. Using your lean keys, the weapon will pivot 90-degrees left or right, allowing one to look around and over cover. Using this thing never got old, and to my knowledge it is the first time this weapon has appeared in a video game. It really is the best thing about the gameplay – the rest of the guns are dull and fairly useless, and the stealth is barebones and terrible at actually letting you know if you’re within detection range or not. Those vision cones are lies, and with no stealth gadgets or options beyond crouching and your suppressed weapons, it’s just not an enjoyable way to play the game.

A late-game twist on your available gadgets, mobility and abilities makes the combat and even the stealth much, much more enjoyable, but it comes so close to the end of the game that it just made me more angry that this wasn’t the way you traversed, infiltrated and fought for the whole game.

On the technical side of things, Get Even is an OK-looking title – abandoned buildings, graveyards and the odd sleek corporate office unfortunately don’t offer much variety in the environments. Sound design on the other hand is borderline-masterful, with music and environmental sound always complementing the scene no matter what – from tense asylum encounters to tear-jerking dream sequences or shocking revelations, the sound team and composer certainly knew how to put you in the moment and/or unsettle beautifully. Voice acting is for the most part well done – I was especially partial to Cole Black’s Sean Bean-soundalike.

Get Even is not without its hiccups on the technical end, however – I experienced multiple instances of slowdown and framerate stutter (mostly in the asylum), and many times I got stuck in or on level geometry. Without the ability to jump at all in the game and with my crouch button strangely nonfunctional in these moments, I was forced to reload from one of Get Even’s often-sparse checkpoints. Enemy AI is also poor, and they too would often get stuck on scenery or simply stop moving altogether, despite having had an observable pattern of movement previously. 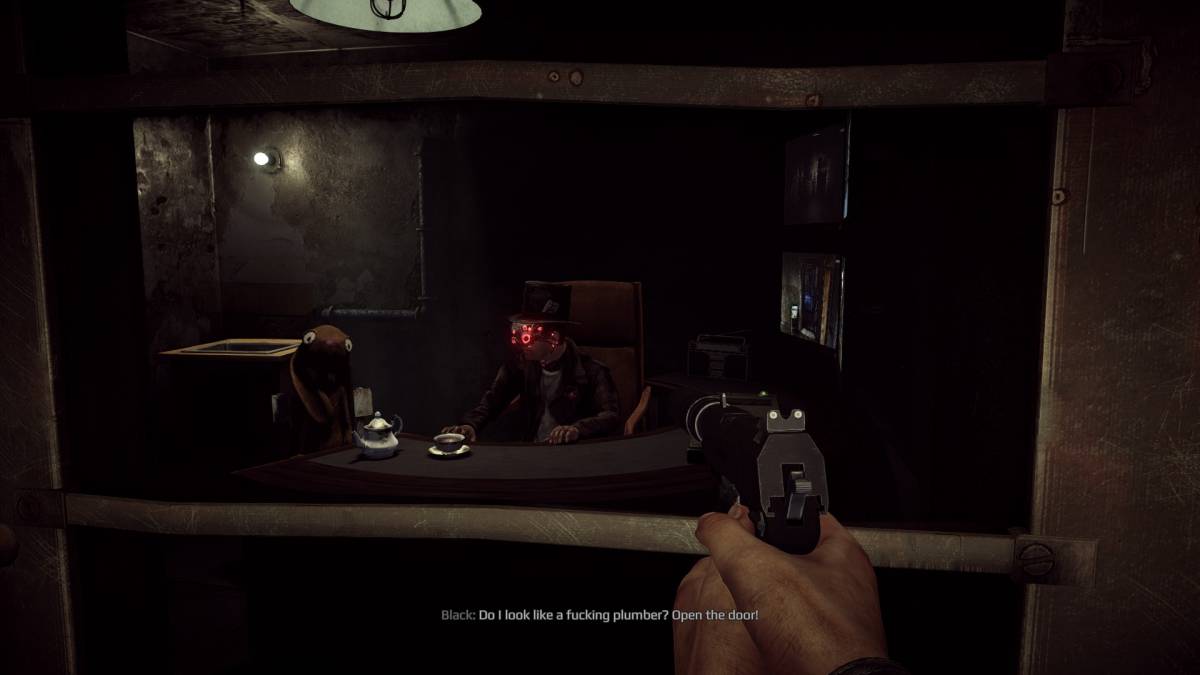 With all of that said, I must emphasize just how well Get Even succeeds at transcending these normally-significant issues. Combat/stealth sections are short, especially once you learn what little there is to learn, and the steady drip feed of puzzles and clues through investigation and dialogue, coupled with some interesting ways of making interfaces and tools diegetic, a fucking CornerShot and a roller-coaster of a third act make Get Even well worth checking out for anyone into psychological thrillers/horror, compelling mysteries or just plain weird shit – like me telling the Mad Hatter wearing a VR headset to fuck off while he pretends to drink tea with a stuffed rabbit.

I won’t lie to you and tell you you’ve never seen a story like this before – you will likely predict several of the beats and twists, and Farm 51 wears their influences on their sleeve proudly, but I guarantee you’ve never seen this type of story told like this, because Get Even lets you experience it in a way that only video games can – as a participant.

All screenshots taken by author.

Verdict
Despite some significant deficiencies in the gameplay department, Get Even more than makes up for dull shooting and inconsistent, frustrating stealth with a well-told, genuinely emotional and thought-provoking take on the "enter memories/dreams" concept. At $29.99, it's well worth the 12 or so hours you will spend exploring its web of deceit and discovery, and you may appreciate a horror game where you get to just shoot all the crazies instead of running like a sissy.
7
Cultured Vultures is a pop culture website established in 2013 covering all things gaming, movies, and more. We eat your words.
All The News On Your Favourite Games