Home
TV
Friends: The Reunion Is Nostalgia At Its Finest
TV
·5 min read

Friends: The Reunion Is Nostalgia At Its Finest

The one where they all get back together again. 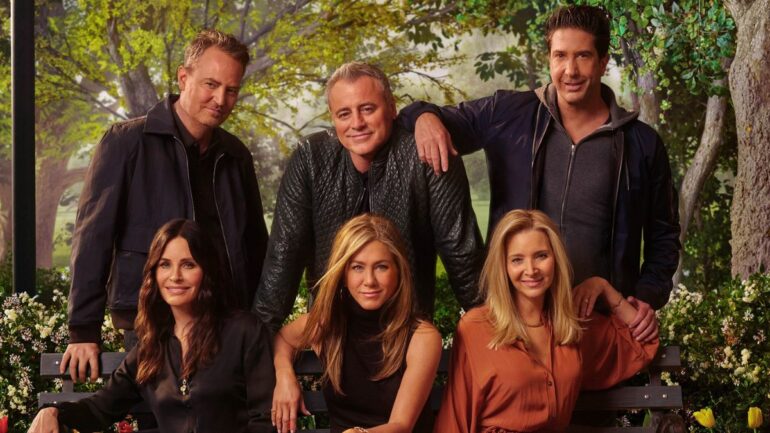 It’s been 17 years since Friends ended its 10 year stint on TV. Usually, when a TV show ends, it slowly fades to the back of our minds, till maybe we catch a glimpse of it on TV again and feel a desire to rewatch it. Friends isn’t like that, because it remained ever present in our cultural consciousness. It might have been 17 years, but every now and then there are Buzzfeed quizzes about which Friends character you are, best episode lists, and the inevitable debate in the comments section on whether or not Ross and Rachel were on a break (the cast agrees that they were).

There is such a universal quality to the humour on Friends that my whole family can sit down and watch it together, and despite the 8 year difference between my younger brother and I, this is somehow a show we watched together while growing up.

And today, I sat down with my whole family, and we watched the reunion. We didn’t know what kind of format it was going to be, since it isn’t scripted. What we got was something like a documentary: the show’s creators telling us how it all began, with the story, the cast, and how they decided it was all going to end. There was also an interview portion with James Corden, and while interesting questions were raised during this segment, I wished they could have had a recurring character or someone part of the Friends circuit to interview the cast. It felt weird to have celebrities unrelated to the show make an appearance in this reunion special.

I understand that many of these celebrities probably leapt at the opportunity to be a part of this reunion, but the focus should have been kept to the main cast and other people who worked on the show. Lady Gaga and a choir coming in to sing ‘Smelly Cat’ with Lisa Kudrow felt overpowering and unnecessary, and as much as I love Gaga, I wasn’t watching this reunion show to see her flex her vocal chops. There were other moments where celebrities like David Beckham and Kit Harrington spoke about their favourite episodes or moments on the show as a means to segue to said episodes and scenes.

Once again, I felt having people who worked on the show would have more weight, but I guess filming something in current times means that beggars can’t be choosers. Though they did have James Michael Tyler (Gunther) Zoom call in since he couldn’t be there in person, so I think they could have found a way. A notable actor missing from the festivities was Paul Rudd, who played Phoebe’s husband Mike Hannigan on the show. I do wish he could have been the host instead of Corden, but I guess there must have been good reason as to why he couldn’t be a part of the show.

They incorporated the infamous apartment quiz as part of the reunion show, this time with new questions. The cast still have great chemistry together, and though none of it’s scripted, it was still such a blast watching them interact and answer the questions. The table reads of certain pivotal scenes were definitely a highlight. As a Ross and Rachel shipper, watching Jennifer Aniston and David Schwimmer re-enact the moments leading up to Ross and Rachel’s first kiss was still as magical as the first time I watched it unfold.

I did wonder how the cast kept things so platonic, since romantic relationships are quite common between co-stars – Joshua Jackson and Katie Holmes were dating during the early seasons of Dawson’s Creek, and of course everyone knows about the ill-fated romance between Nina Dobev and Ian Somerhalder on The Vampire Diaries.

So, the little nugget of information about Aniston and Schwimmer having feelings for each other felt so surreal. There was even some footage of these little moments between the two, and it completely explains why Ross and Rachel had such palpable chemistry. Aniston herself said they channelled all their feelings into Ross and Rachel, since it wasn’t meant to be between the both of them. Of course both have now moved on with their own lives, yet it does make you think about what could have been, and how their romance might have changed things for the show.

Other tidbits followed, like Matt LeBlanc’s shoulder injury on the set and how they weaved it into the show’s narrative for a bit, as well as Chandler and Monica’s romance being completely unplanned. The show’s creators went into the importance of the live shows, and how it impacted their writing and stories. If a joke didn’t land, they would change the line, and the reunion actually showed us moments of this happening in the flesh. Monica and Chandler’s story gained traction because of the audience’s reaction. If this is a relationship that everyone was rooting for, they wanted to see where they could push it and what could become of it.

This is the reason why Friends was so successful – the show was always evolving and eager to explore new paths, in contrast to a show like How I Met Your Mother, which started with an ending in mind and stuck to that ending even when it didn’t make sense to the show anymore. Even when certain narratives were expected, like Ross and Rachel getting back together in the finale, they still found a way to deliver it in an unexpected way. I was pretty sure they were going to end up back together, yet I was still on the edge of my seat for that entire episode. The finale had cliched romance staples like airport chases, yet it was the furthest thing from a generic airport love declaration.

The cast spent time hanging out in the old set, taking turns to shed tears (I might have shed a few as well) as they reminisced and swapped stories about their time on the show. They also watched some of the bloopers together, and though I am familiar with the bloopers, having spent quite some time watching the compilations on YouTube, they were still as funny as ever. As were the little episode snippets that were weaved in, like Ross’ leather pants, the pivot scene, Phoebe discovering Monica and Chandler are sleeping together, Monica and Ross’ dance (would have loved to see this reenacted), and many more.

The weird thing is, this reunion show is almost 2 hours long, yet we barely felt that time. At the end of it, my brother turned to me and said: “Is it strange that I want to watch more of this?” Somehow, just being with the cast again, getting to watch them share the same space and take a walk down memory lane, that was all the entertainment we need. The creators are right: we don’t need to reboot the show or see what the characters are up to all these years later, because we know. We spent ten years with them, and they will continue to live on in our heads, leading the happiest of lives, and will always be the best of friends – our friends.