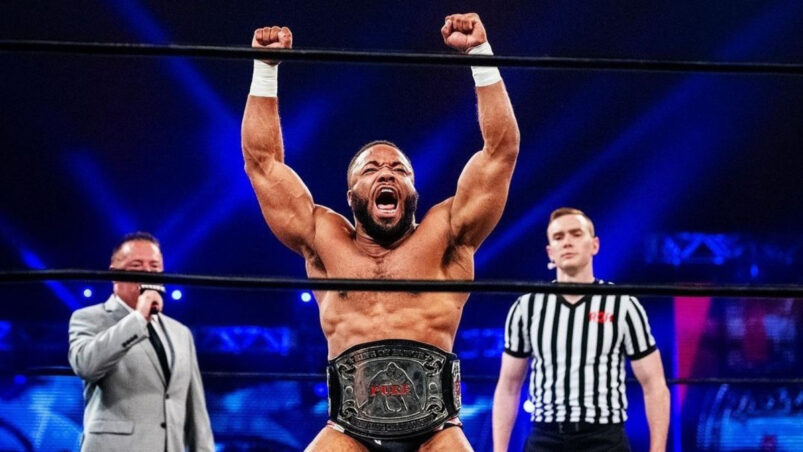 At Ring Of Honor’s last PPV of 2021, Final Battle, Jonathan Gresham defeated World Champion and the former face of ROH, Jay Lethal, to become ROH Champion for the first time. With ROH having entered into a hiatus until April 2022, Gresham has taken it upon himself to become a traveling champion, defending the title in a range of promotions such as Game Changer Wrestling, Impact Wrestling, and Gresham’s own debuting company, Terminus.

As another opportunity to kick down the famed ‘Forbidden Door’, there are a substantial number of wrestlers who could challenge for the ROH World Title. Considering its respected history and the unparalleled alumni of wrestlers who have lifted the championship, there are many possible dream matches for Gresham. But beyond that, the ROH World Title represented an opportunity for cult favourites to take that next step into the main event.

With that in mind, here are ten wrestlers that cover both the aforementioned criteria as possible opponents for Gresham.

Nicknamed ‘The Wrestling Genius’, Makabe may be one of the best secrets on the independent scene. Having made his name in 3-2-1 Battle from his debut in 2014 to 2019, he began to break out in Germany with matches for WALTER’s home promotion, Westside Xtreme Wrestling (WXW), before the worldwide pandemic affected it. During his time with 3-2-1 Battle, Makabe even earned a victory over Gresham at BattleMania 2019 and has also held their two main singles titles (Solid Steel Champion and Pacific Middleweight Champion) for a combined 427 days over three reigns.

Makabe is an 18-year veteran who prides himself as being a technical-based, scientific wrestler, which culminated in an excellent trilogy of matches with Timothy Thatcher at three successive Wet Hot Seattle Summer events for 3-2-1 Battle. A match between Makabe and Gresham could not only be a technical masterpiece but could introduce a larger market to the underappreciated Makabe as well.

To most people, he’s the third member and adopted ‘son’ of AEW’s excellently grating 2point0, a technical contrast to their more comedic styles. However, the last few months have seen Garcia impress in singles matches against both Eddie Kingston and CM Punk, two of AEW’s very best. Unbeknownst to those who’ve only witnessed him in AEW, Garcia is one of the best talents on the independent scene, having spent most of 2021 impressing as Limitless World Champion.

Having wrestled in a range of matches against Punk. Minoru Suzuki, Alex Shelley, and a sixty-minute draw with Wheeler YUTA, the only thing missing is a breakout match on AEW. Having supposedly appeared in more main events in AEW over the last six months than anybody else, a ROH World Title match between Gresham and Garcia on an episode of AEW Dynamite or Rampage could be a legitimate Match of the Year Contender.

Formerly of Ring of Honor and currently with Game Changer Wrestling, Deppen has had previous matches with Gresham{ a singles match back in 2019 that Deppen won, and tag team battles between The Foundation and VLNCE UNLTD. An all rounder who has become ever-present in GCW events, Deppen actually defeated Mike Bailey in the same event that Gresham defended his ROH World Title against 2 Cold Scorpio, Deppen’s fifth successive singles victory in GCW.

With a history between Deppen and Gresham to build on, and an opportunity for Gresham to redeem his loss against Deppen, the story is there ready to be capitalised on. A much more abrasive individual, Deppen is the sort of opponent that would enjoy using the ‘Pure Rules’ against Gresham, antagonising both the champion and the fans. With a rabid GCW crowd behind them, this could be a stand-out title defence for Gresham.

A possible surprise choice, Angelico has had a disappointing time in AEW while teaming with Jack Evans, whether due to injuries or underwhelming booking. The recent inclusion into the Hardy Family Office suggested a change of direction, but little has really changed. What has been consistent, however, is Angelico’s in-ring work, as he gradually transitioned from a high-flyer into a more submission orientated worker, epitomised by his finisher the Cruceta Invertidas (Reverse Figure Four Leglock).

An often forgotten aspect of the ROH World Title was that it often allowed unlikely individuals a chance to breakout or revitalise their career when challenging for it. Both of the Briscoe Brothers and CM Punk became main event prospects after their performances challenging for the title, stars such as Roderick Strong and Kyle O’Reilly proved themselves and Michael Elgin earned a 5-star rating for his match with Davey Richards. This doesn’t even include Samoa Joe, Tyler Black, Austin Aries, or Adam Cole, whose victories as champion crowned them as legitimate stars. With that in mind, a match against Jonathan Gresham could allow Angelico to revitalise his career and transition into a singles wrestler.

Most recognised for his singles run in NXT during 2020-21 against names such as Pete Dunne, Finn Balor and Cole himself, O’Reilly is also a former ROH World Champion. As his reputation as a singles main eventer is at its highest, regressing to just a tag team wrestler is almost a disservice. With that in mind, a dream match between Gresham and O’Reilly could be a guaranteed main eventer on any episode of AEW Dynamite or Rampage.

Already mentioned previously in Makabe’s entry, Timothy Thatcher is weirdly the quintessential pure wrestler who has never appeared in Ring of Honor. Inspired by and devoted to the adage ‘the mat is sacred’, Thatcher is a rare combination of technical brilliance and giant mass capable of brutality, possibly only matched by Samoa Joe and WALTER. Having previously wrestled for WXW and EVOLVE, his recent release from NXT served as a shock to most fans.

Interestingly, before joining NXT in 2020, Thatcher actually appeared four times for GCW, most notably at their popular Bloodsport events. With Gresham having already defended the ROH World Title in GCW, combined with Thatcher claiming a recent victory over Gresham with the WXW Unified World Wrestling Title at stake, a title match between the two has great potential. Not including their technical ability, the size difference between the two (Thatcher 6’3 and Gresham 5’4) offers a great ‘David and Goliath’ battle that puts the champion at a rare disadvantage.

This is less of a dream match and more of an opportunity to rectify an issue. When discussing their match at Final Battle for Gresham to win the championship for the first time, he mentioned the different setbacks they experienced. There’s the fact that Lethal was a last minute replacement to begin with, but they were originally supposed to have a half hour time slot, which gradually whittled down to about 11-15 minutes.

Considering that both men have previously impressed in a half hour Iron Man match, the opportunity for them to play out their original half hour story on a bigger platform, such as an episode of AEW, could steal any show.

The ‘Murder Grandpa’ himself, Suzuki entered 2022 winning the King of Pro-Wrestling Championship, a title where each match has a different stipulation voted on. Previously a joke title for Toru Yano, the sadistic and violent nature of Suzuki inspires fear in his opponents. Considering Suzuki’s history as a predominantly old-style, technical submission specialist who systematically dissects his challenger, the idea of him taking pleasure out of ripping someone apart after they use all three rope breaks is unnerving.

In September 2021 during his tour of America, Suzuki actually defeated Gresham in a singles match at GCW Highest In The Room, but not in a ‘Pure Rules’ match. If Suzuki were to return to America for another tour, a rematch with Gresham’s rules in place could create a possible classic for the ROH Title.

In 2016, just a few months after winning the 16 Carat Gold Tournament in WXW, Zack Sabre Jr appeared at a trilogy of events for Beyond Wrestling. At those three events, over the course of 5 weeks, ZSJR battled Jonathan Gresham in a trilogy of technical masterpieces. But in a shocking turn of events, Gresham actually won all three matches, including a Two-Out-Of-Three-Falls classic in the third match. At a time when ZSJR was on the rise, he selflessly put over Gresham.

Six years on, Gresham is now the Ring of Honor World Champion, and is travelling around the country defending that title. When ROH was running shows, they regularly partnered with New Japan, which included in 2019 a tag team match between Gresham and ZSJR. With both men having grown in prominence, experience and ability, the possibility of booking Gresham at a New Japan show against ZSJR is still a dream match. In fact, there is a precedent for the ROH World Title being defended at New Japan shows, specifically Kyle O’Reilly defending against Adam Cole at Wrestle Kingdom 11.

Part of me is tempted to just leave this space blank and go “well, duh”. You have in Gresham the current face of Ring of Honor, the man who won the newly revived Pure Championship in 2020 and defended it for 317 days, the man entrusted to take the ROH World Championship into uncharted waters. Then you have Bryan Danielson, who main evented the first ever ROH show, who held the World Title for 462 days (the fourth longest in history) with 38 successful title defences (second only to Nigel McGuinness) and is arguably now the best wrestler on the planet.

But more than that, Danielson himself has admitted he wants to face Gresham, even admitting he thought that he could have been a good replacement for Bandido at Final Battle. With that in mind, Ring of Honor’s big return from hiatus with Supercard of Honor XV on April 1st 2022 couldn’t get much bigger if they announced a crossover match between AEW’s Danielson and ROH’s Gresham.