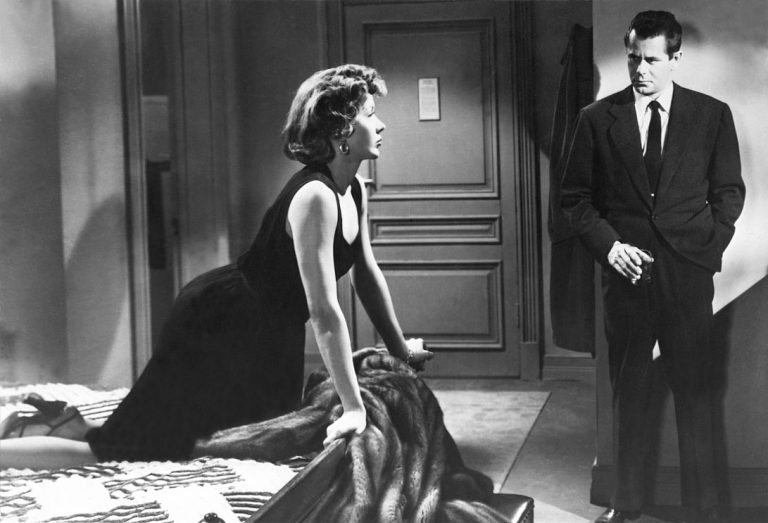 Is film noir (French for “dark film”) a genre all its own? By and large the polls are still out on that one, but in my opinion it is, for the sheer fact we can see identifying aspects across many different movies, made several years apart.

The classic period of film noir is generally recognized as a set of American titles released during the 1940s and 50s that were in part inspired by the hardboiled fiction of Raymond Chandler, James M. Cain, Dashiell Hammett, and Jim Thompson (many of these writers’ novels were adapted into quintessential noir films, especially Cain’s Double Indemnity; moreover, the hardboiled authors also contributed original and adapted screenplays to the canon). Films that appeared after this period are loosely categorized as neo- or revisionist noir, particularly where foreign responses to the genre come into play.

While many of the hallmark titles (the aforementioned Double Indemnity, The Big Sleep, The Maltese Falcon, The Third Man, the works of Alfred Hitchcock, etc.) will require a Netflix DVD subscription, a Redbox account or a damn good (and still-thriving) local video store, there are some classic and underrated gems available through the major streaming services that you can watch right now. Here’s a list of some noteworthy titles to check out.

Hulu offers the most significant collection of classic and revisionist noir, thanks in part to the service’s partnership with the Criterion Collection. Of particular note here are the works of Fritz Lang: Scarlet Street, featuring genre staple Edward G. Robinson (get used to seeing his name), and the proto-noir M, an example of latter-day German Expressionism, a movement that had a tremendous influence on the look and mood of the classic noir films.

Also note Akira Kurosawa’s fantastic contributions The Bad Sleep Well, High and Low, and Stray Dog, as well as the absolutely bleak Deep Crimson, a 1996 remake of The Honeymoon Killers, which is also available.

Pitfall (1948)
Directed by André De Toth
Screenplay by Karl Kamb, based on a novel by Jay Dratler.
Starring Dick Powell, Lizabeth Scott & Jane Wyatt
Tagline: Her love was Pitfall… to the only man she didn’t want to hurt…

Scarlet Street (1945)
Directed by Fritz Lang
Screenplay by Dudley Nichols, based on the novel & play La Chienne by Georges de La Fourchardière and André Mouézy-Éon.
Starring Edward G. Robinson, Joan Bennet & Dan Duryea
Tagline: The things she does to men can end only one way — in murder!

The Strange Love of Martha Ivers (1946)
Directed by Lewis Milestone
Screenplay by Robert Rossen, Story by John Patrick
Starring Barbara Stanwyck, Van Heflin & Lizabeth Scott
Tagline: Fate drew them together… and only murder could part them!

The Red House (1947)
Directed by Delmer Daves
Screenplay by Delmer Daves, based on a novel by George Agnew Chamberlain
Starring Edward G. Robinson, Lon McCallister & Judith Anderson
Tagline: Of this man… and the girl who lived in The Red House… people spoke only in whispers!

Hollow Triumph (1948)
Directed by Steve Sekely
Screenplay by Daniel Fuchs, based on a novel by Murray Forbes
Starring Paul Henreid, Joan Bennet & Eduard Franz
Tagline: HIS SCAR marked them BOTH!!

The Strange Woman (1946)
Directed by Edgar G. Ulmer & Douglas Sirk (uncredited)
Written by Herb Meadow, based on a novel by Ben Ames Williams
Starring Hedy Lamarr, George Sanders & Louis Hayward
Tagline: So shocking she could only be spoken about in whispers!

Fear (1954)
Directed by Roberto Rossellini
Written by Sergio Amidei, Roberto Rossellini & Franz von Treuberg, based on a novel by Stefan Zweig
Starring Ingrid Bergman, Mathias Wieman & Renate Mannhardt
Tagline: She was cornered and she knew it…but she couldn’t do anything about it…except one thing which could only lead to F-E-A-R!

Elevator to the Gallows (1958)
Directed by Louis Malle
Written by Roger Nimier & Louis Malle, based on a novel by Noë Calef
Starring Jeanne Moreau, Maurice Ronet & Georges Poujouly
Tagline: Frantic for life and love—Frantic for excitement

There are a few forgotten titles available, in particular Jennifer 8 and Things To Do In Denver When You’re Dead, both of which feature Andy Garcia. Also take note of the two Jim Thompson adaptations: Stephen Frears’s pitch-perfect The Grifters, and Michael Winterbottom’s gritty-bordering-on-revolting The Killer Inside Me.

Angel Heart (1987)
Directed by Alan Parker
Written by Alan Parker, based on a novel by William Hjortsberg
Starring Mickey Rourke, Robert De Niro & Lisa Bonet
Tagline: Harry Angel has been hired to search for the truth… Pray he doesn’t find it.

Laura (1944)
Directed by Otto Preminger
Written by Jay Dratler, Samuel Hoffenstein & Elizabeth Reinhardt, based on a novel by Vera Caspary
Starring Gene Tierney, Dana Andrews & Clifton Webb
Tagline: The story of a love that became the most fearful thing that has ever happened to a woman!

House on Telegraph Hill( 1951)
Directed by Robert Wise
Written by Elick Moll, Frank Partos, Robert Bassler, Richard Murphy & Robert Wise, based on a novel by Dana Lyon
Starring Richard Basehart, Valentina Cortese & William Lundigan
Tagline: This is the house forbidden to every woman with a conscience, forbidden to every man with honor!

The Killer Inside Me (2010)
Directed by Michael Winterbottom
Written by John Curran, based on a novel by Jim Thompson
Starring Casey Affleck, Kate Hudson & Jessica Alba

Jennifer 8 (1992)
Written & Directed by Bruce Robinson
Starring Andy Garcia, Uma Thurman & Lance Henriksen
Tagline: On the trail of a serial killer, Detective John Berlin has no clues. No suspects. And no alibi.

Things to do in Denver When You’re Dead (1995)
Directed by Gary Gleder
Written by Scott Rosenberg
Starring Andy Garcia, Christopher Walken & Christopher Lloyd
Tagline: They can die quickly. They can die slowly. But they must die!

No titles from the classic period available here (for now), but a few standout neo-noirs are worth noting, including Disturbia, another retelling of Rear Window, the Coen Brothers’ Miller’s Crossing, the little-seen and highly underrated The Deep End, and perhaps the blackest of all noir narratives, The Hitcher.

Under Suspicion (2000)
Directed by Stephen Hopkins
Written by Tom Provost & W. Peter Iliff, from a previous screenplay by Claude Miller, Jean Herman & Michel Audiard, based on a book by John Wainwright
Starring Morgan Freeman, Gene Hackman & Thomas Jane
Tagline: In a world of secrets, the truth is never what it seems.

We often forget about Crackle, all tucked away down there. And while the onslaught of ads you have to put up with on the otherwise free service almost make watching movies displeasurable, there are a couple of titles that may just make the endeavor worth it.

Fritz Lang’s The Big Heat is one of THE noir films of the classic period, and Dead Men Don’t Wear Plaid is a hilarious send up of the genre starring Steve Martin and a host of contemporary stars spliced into the narrative (Humphrey Bogart among them). It’s a good one to cleanse the palate after such a long journey through the darkest corridors of the soul.

The Big Heat (1953)
Directed by Fritz Lang
Written by Sydney Boehm, based on a serial by William P. McGivern
Starring Glenn Ford, Gloria Grahame & Jocelyn Brando
Tagline: Somebody’s going to pay…because he forgot to kill me…

Note that streaming availability comes and goes, and while all these films will be available throughout March 2016, it’s anyone’s guess beyond that.

Also note this list is in no way exhaustive, but rather meant to be a starting point. There are numerous other films on all four streaming services mentioned that would qualify as noir, but they’re not included here for the sake of brevity.