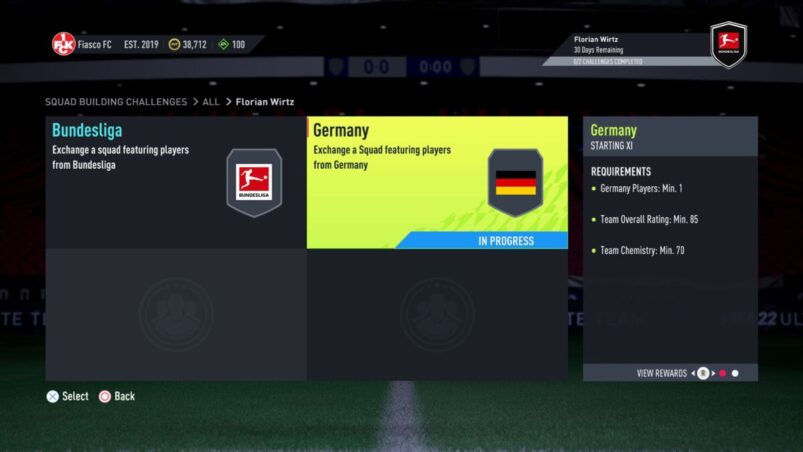 Florian Wirtz has been voted as September 2021’s POTM in the Bundesliga, and has quite the card to prove it in FIFA 22‘s Ultimate Team.

The 86-rated CAM has some big upgrades across the board, with some of the best CAM attributes of anyone in the game, including being wicked fast with 81 — significantly more than most midfielders.

A month to remember for Florian Wirtz 😁

To get Wirtz’s POTM card, you must complete two different SBCs:

While it might be somewhat tricky on paper to get overall team ratings up in the Bundesliga compared to the Premier League, the market is still very weak right now for all players that aren’t either Messi, Ronaldo, or Mbappe. Lewandowski, a 92 card, can be yours for a very soft 50K FIFA Coins or so, with both of these packs costing you around 75K-100K apiece if you shop smart. You can even build them for around 50K in total if you shop super smart without Lewa.

Don’t forget that you don’t even need to do Bundesliga players for chem on the Germany SBC, as you can use cheap players like Gundogan to improve the overall rating, while you don’t even need green links all over up to reach the required chemistry. That said, Sane is a very underappreciated players that you can get for cheap and link nicely with Lewa for chem increases and is also German.

Reus is a great cheap option for this SBC, an 85-rated card that should cost 5K, while you may want to use Can as CDM for a few coins for both SBCs. Hummels is probably the best German CB option at around 7K coins, while Tripper is a steal at 2K coins for RB. Guerreiro at LB is even less at around 1800 coins. You will definitely have to go to other leagues to hit 85 on the Germany SBC, though, as it’s difficult to get it to 85 in just the Bundesliga.

Regardless of what you buy/use, you’ve got 30 whole days to complete this Wirtz SBC, which will be available until midway through November — no huge rush to get it done.