What Is An Exploding Barbed Wire Deathmatch?

Moxley vs Omega III is going to be insane! 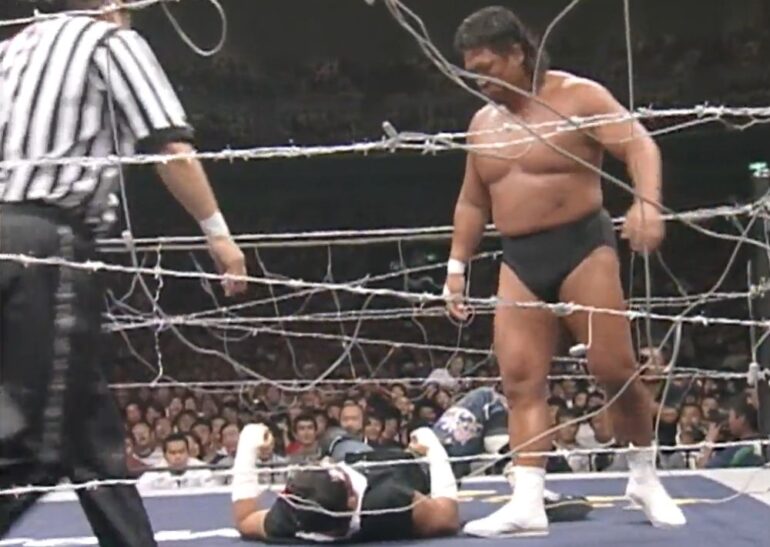 On February 17th’s edition of AEW Dynamite, it was confirmed that Kenny Omega will defend his AEW Championship against former champion, Jon Moxley, in a match not seen on television since the early 2000s: an Exploding Barbed Wire Deathmatch. For those wondering what this kind of carwreck might lead to, well, it’s exactly what it says on the tin: lots of barbed wire, lots of pyro and an abundance of violence.

The Exploding Barbed Wire Deathmatch was first conceived in Japan during the 1990s by experimental wrestling promotion Frontier Martial Arts Wrestling (FMW), who upped the ante with their hardcore rules by introducing the deathmatch genre.

In this particular stipulation, violence was taken to a whole new level with the ring ropes being replaced by actual barbed wire with exploding wires added in between and C4 explosives planted around the outside of the ring. Victory is still achieved under the traditional pinfall/submission rules, but in the case of deathmatches, I’m sure loss of blood also counts as a viable defeat. Wrestlers will also have access to a slew of other weapons to inflict even more pain to their opponents: Glass tables, ladders, barbed-wire wrapped chairs and baseball bats, whatever they deem necessary in this already chaotic environment.

It was absolute madness, but fans of the hardcore style adored the new twist on the gory aspects of pro wrestling mostly seen in Puerto Rico at the time. American promotions soon started emulating the success of these sort of matches, but never really took it quite as far as in Japan.

Some of the most iconic hardcore wrestlers of all time have stepped in between the barbed wire ropes to spill blood: Cactus Jack (Mick Foley), Terry Funk and Sabu have all found themselves tangled in the unforgiving spiked metal and singed by the C4. Avid fans of ‘The Hardcore Legend’ will recognise this particular match type from his book ‘Have a Nice Day’, where Foley described his encounter with Terry Funk in the climactic final of IWA’s Deathmatch tournament.

Foley, who later became recognised as pioneer of the genre, described how Funk insisted that the explosives used were as powerful as can be – legitimate military grade stuff – and later spoke of how he suffered second degree burns and required just over 20 stitches after the match had finished. All this for us sick, sadistic wrestling fans.

Whether or not AEW take the spectacle as far as the aforementioned names once did will be told on March 7th. But if I were to harbour a guess, I’d say Jon Moxley is especially looking forward to embracing his hardcore roots once again.