Driven Out will kick your ass, and you will love it. 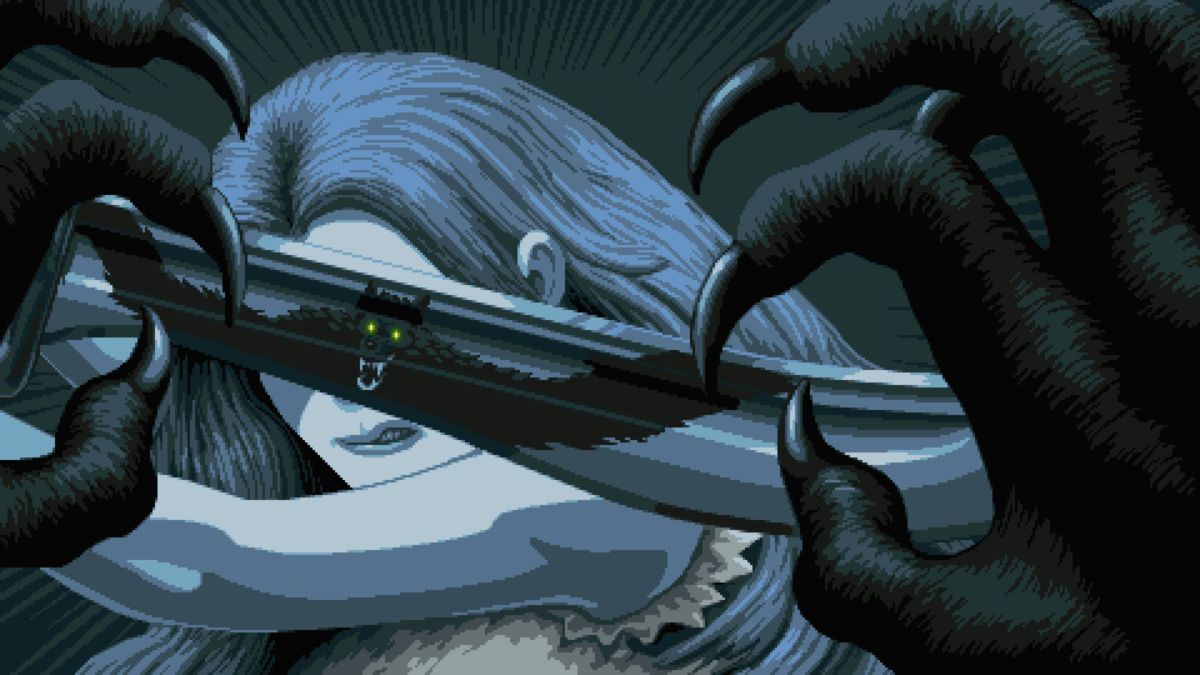 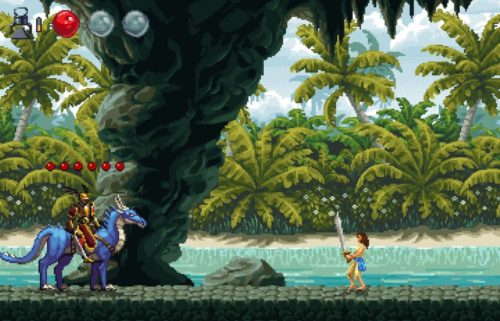 I finally have the golden armoured guard’s attack pattern down: high attack, high attack, low attack, and then high, medium, low. I ready my sword, and nerves, executing my parries, before swinging my giant metal blade, connecting my sword to his chest plate. The swine who has made the last hour of my life a rage-filled nightmare is no more. Finally, I feel relieved, and pace along to the next opponent waiting off-screen.

It’s another guard, but now he’s riding atop a dragon-horse hybrid creature, and it’s spitting fireballs. I have no idea how to counter this – the fire doesn’t stop. Panicking, I desperately press at my guarding commands, the composure I had only seconds ago now reduced to dust. A fireball smashes into my face, and the farm girl flies backwards. 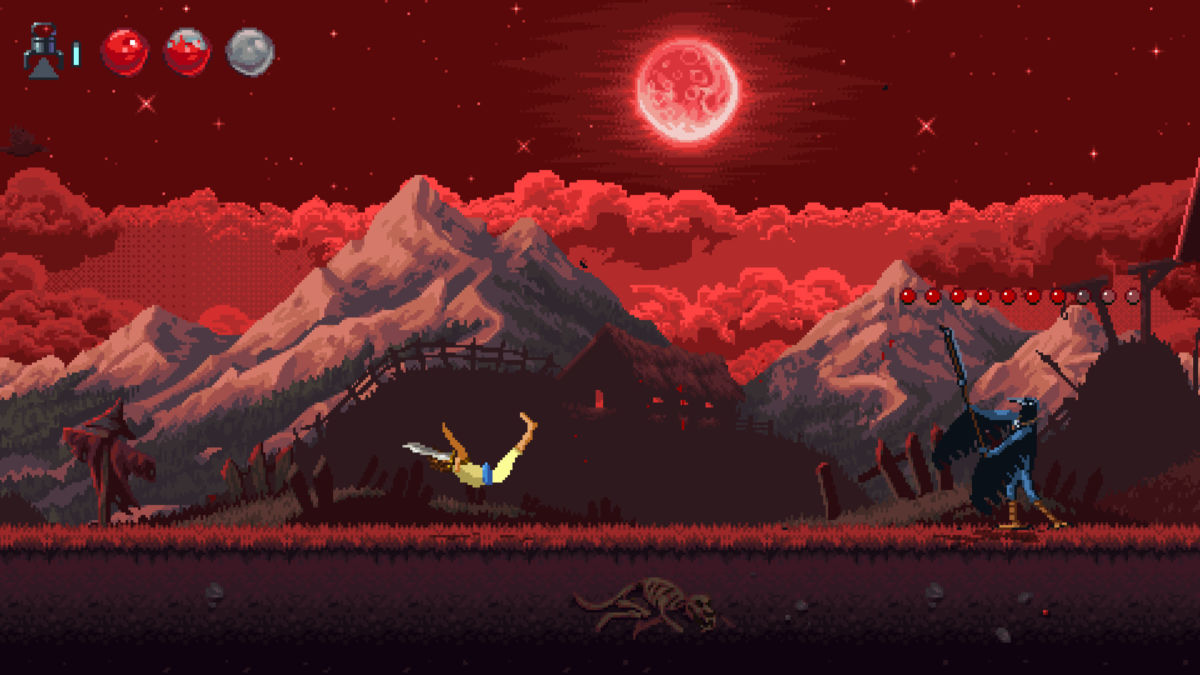 It’s the game over screen once again, a screen I know all too well by this point, but instead of anger, I feel the need to try again, and again, and again. This is part of the magic of Driven Out – despite every frequent obstacle, there’s something about it that makes you want to keep playing.

In Driven Out, a 2D fantasy-action side-scroller, you play as a nameless farm girl who suddenly finds herself in possession of a big sword and a witchcraft contraption, as well as plenty of enemies to slay. There are no upgrades, no armour, just the sword, the device and three bubbles of health. The farm girl, however, has absolutely zero fighting experience, meaning you can’t run headfirst into any combat situation without a game plan. Timing and blocking is everything in Driven Out. 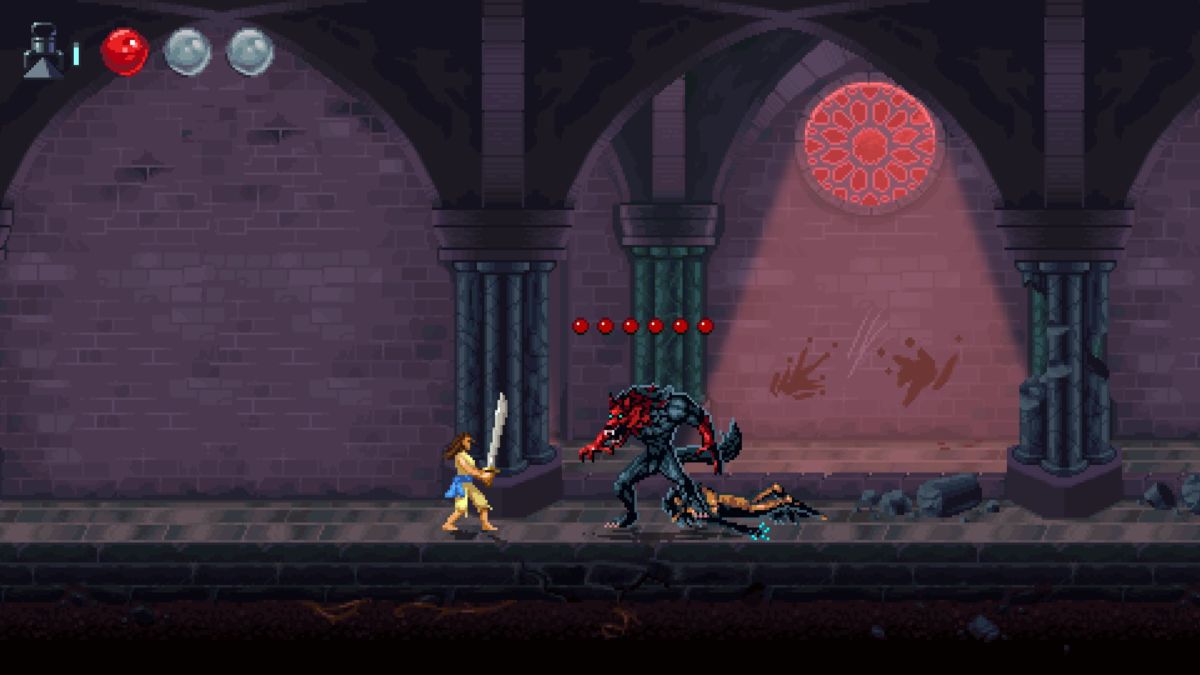 To have a fighting chance, you need to study each enemy and their attack patterns. Driven Out is a game with an enormous learning curve, and, take it from me, you are going to be beaten around the screen and killed a lot. And I cannot stress the ‘a lot’ part enough. I genuinely feel like I have seen the ‘Game Over’ screen more than my own family in the past week.

The combat itself is simple enough, on paper at least. You have three attacks: high, medium, and low. Additionally, you also have three block moves, triggered by holding the block button along with the corresponding attack command to counter in that direction. In principle, it is as basic as it gets, but mastering it is a whole other challenge. 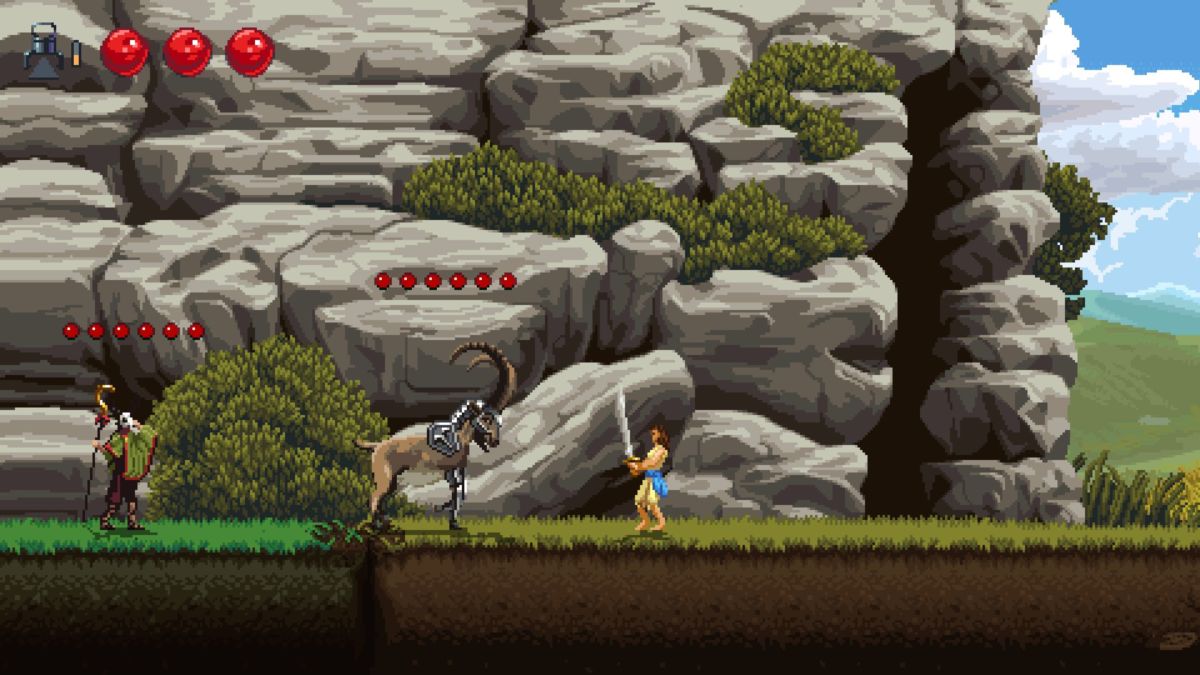 Enemies, too, will have the same range of attacks, but each new enemy will have their own attack patterns and/or combinations. This means you will need to pay close attention to their specific ‘tells’ to counter accordingly. It’s like a high-risk version of Rock, Paper, Scissors – there is a lot of luck and guesswork involved for you to come out on top.

The further you progress, the more difficult the enemies become. Some enemies will be able to hit three-strike combos which, if not countered correctly, can eliminate you in one fell swoop, which means that a solid defense is paramount. This is all without mentioning the boss battles, which present their own trials and tribulations. 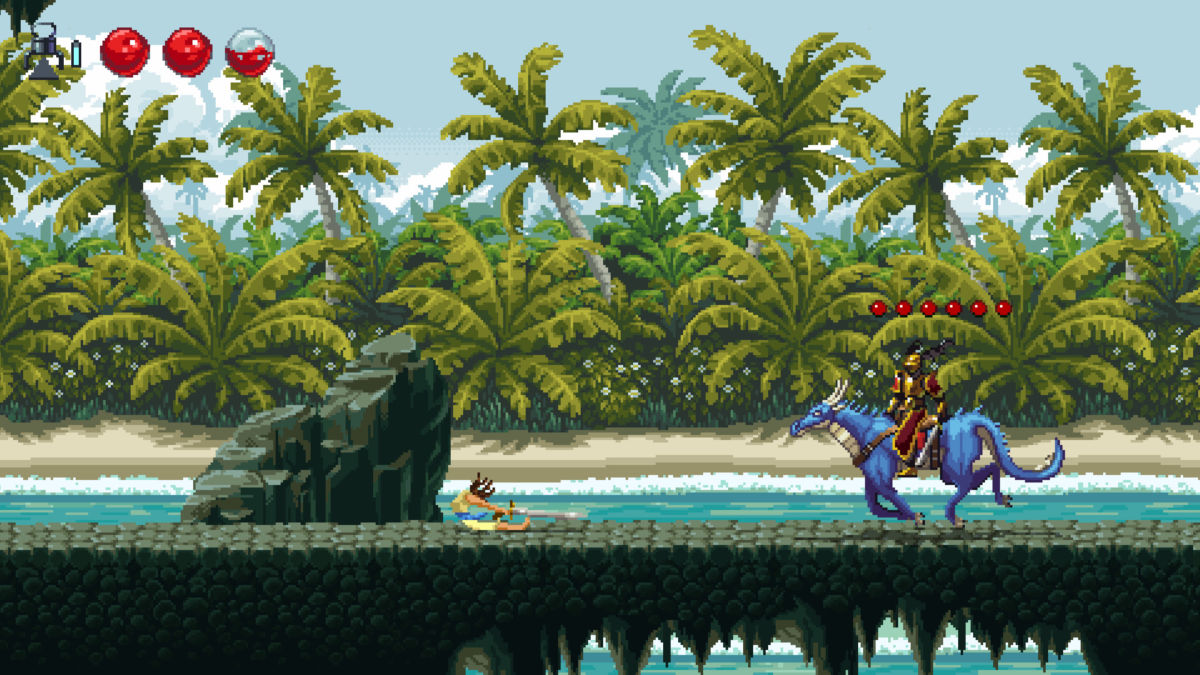 You will typically need to overcome a handful of smaller enemies, before attempting to beat the area boss. Bosses are signified by the extra health bubble above them, and are often much larger in size. One of the earlier boss encounters sees you squaring off against a giant werewolf creature, who will take massive swipes at you, as well as leaping over your head. You will need to react quickly, predict his movements and make sure you turn fast enough to face it, else be swatted like a fly with a giant sword. Another is an armoured gorilla who will charge at you with a barrage of punches and clubbing blows.

Needless to say, you are destined to take a few L’s before earning the most satisfying victories of your life, but it’s an immense credit to the game’s overall design that Driven Out manages to keep each new enemy encounter fresh and exciting, with no two battles feeling the same as the last. 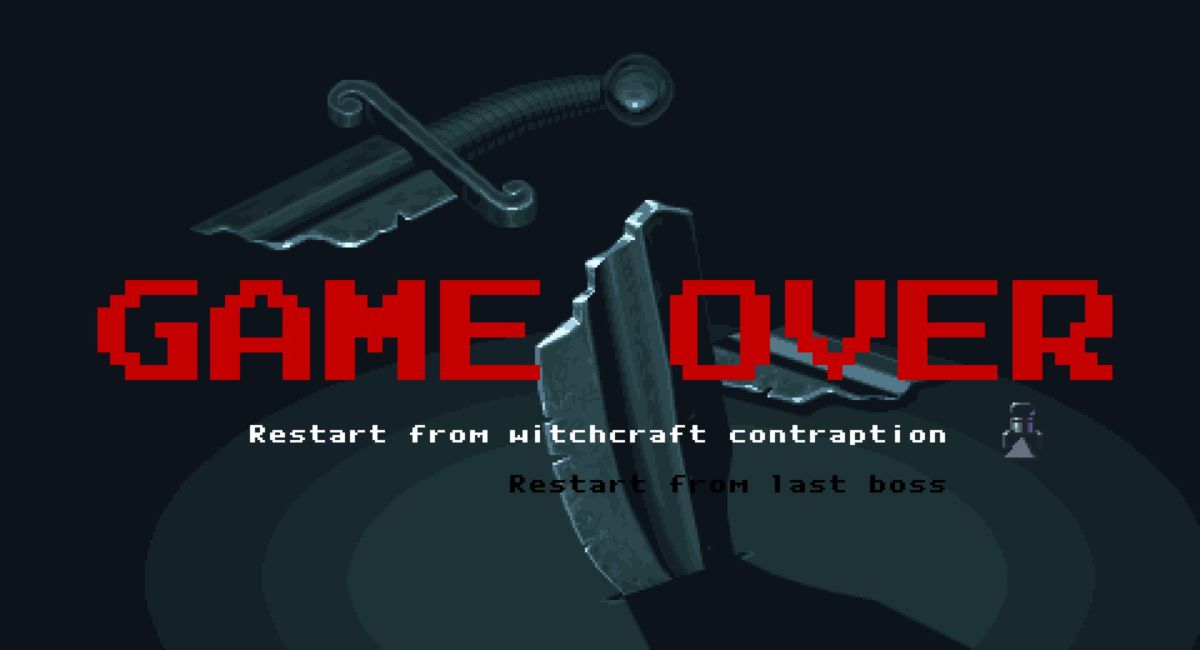 Driven Out does offer small mercy in the form of the ‘witchcraft contraption’, which acts as a form of a checkpoint. Placing the device down will trigger a hologram of the farmer girl, and, if you die, you will respawn at the point you dropped it. Don’t consider this an easy ‘get out of jail free’ card though, as even this comes with its own flaws attached.

Firstly, the contraption itself is weak. If close by, enemies will attack it until it breaks. Should this happen, your checkpoint is gone. Furthermore, you can’t spam the checkpoint facility either. A bar in the top corner of the screen will show how much energy the witchcraft contraption, as you can only use it three times before it needs refilling. Unluckily for you, the only way to do this is by defeating one of Driven Out’s boss battles. Therefore, you will have to be very selective and cautious about where and when you utilise it, adding an extra layer of tactics to this already tough adventure.

The journey is made all the more enjoyable thanks to Driven Out’s gorgeous retro 16-bit aesthetic. The background art and environments are so delightful and distinctive to take in. Even though I was merely moving from left to right across the screen, every new location felt like an entirely different world. The choice to take the game design in a 16-bit direction feels incredibly complementary to the gameplay. All the environments were able to still stand out during moments of intense combat, helping to add even more character and style to the game.

The character designs were also a joy. I couldn’t wait to encounter each new foe, despite knowing how much of an ass-whooping was waiting for me. I must applaud how fluid and seamless the combat animations are. For example, the farm girl’s uncoordinated sword swings make the weapon feel as heavy as it looks, helping sell the believability of every blow. Also, the farm girl and enemies react depending on the type of attack you receive, meaning you will fall or collapse differently. It’s a small touch, but one that makes Driven Out all the more rewarding to play, even in defeat.

Make no mistake, Driven Out is a tough game. It will test your patience, you will inevitably be killed over and over again, and the image of the game over screen will burn itself deep into your subconscious. Yet, despite the challenge it presents, there is an undeniable quality present that makes this game incredibly difficult to turn away from. After every death, no matter the cause nor the number of times I was slain, I immediately jumped back into this fantastical retro world to try again and again. The beautiful design and excellent fluidity only add to what an utterly addictive experience this is.

A review copy of Driven Out was provided by PR for the purposes of this review.

Verdict
Driven Out is an unquestionably hard game, but once you master the delicate art of its combat and parrying, you’ll be compelled to play for hours more. It’s a genuinely brilliant title.
9
Cultured Vultures is a pop culture website established in 2013 covering all things gaming, movies, and more. We eat your words.
All The News On The Biggest Games