Netflix’s Disenchantment To Return This Autumn With Part Two

Matt Groening's swords-and-sorcery Netflix project is coming back - what's everyone hoping for from it? 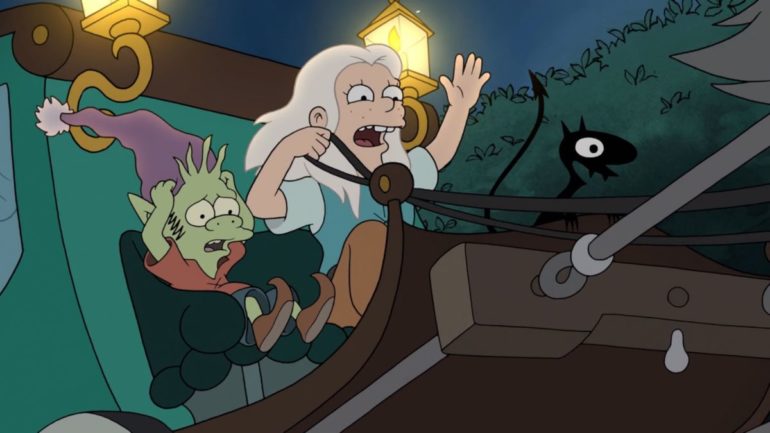 A little over a year after its premiere, Matt Groening’s fantasy-themed animated sitcom Disenchantment is scheduled to return this September 20th. This won’t be the show’s second season, but rather part two of its first – why they’ve divided it up in this way is absolutely anyone’s guess, but this does explain why they were quite so confident in ending the first run of episodes on a cliffhanger.

Straight off the bat, this second installment does have the advantage of low expectations. In spite of an all-star cast, the standouts clearly being Futurama veteran John DiMaggio and the velvety voice of Matt Berry, the show’s first run wasn’t particularly impressive, with our own Charlie Ceates rating it a fairly lukewarm 6.5 out of 10. The best you could say was that it was still finding its feet, moving from largely episodic storylines at the start to an overarcing plot by the end. A ropy first installment isn’t necessarily the kiss of death, especially when we’re talking about Groening’s work – the hugely successful The Simpsons usually has its first two seasons quietly dismissed as flawed prototypes, and the art style of the first in particular is a far cry from the glory years.

But while it was The Simpsons’ art style that needed a little while to settle on something that worked, the biggest issue with Disenchantment was the sound design, with audiences complaining that it all sounded a little canned – ambient sounds felt too weedy, and you were inescapably aware that the voices were actors speaking in a studio. By contrast, thanks to The Simpsons, Nancy Cartwright’s voice sounds downright bizarre coming out of a flesh-and-blood woman of 61 rather than a cartoon boy.

Per the show’s official Twitter, it’s already had further installments greenlit for 2020 and 2021 – so there’ll still be the temptation for the creators to get a bit complacent, knowing they can have another go at getting it right next time.