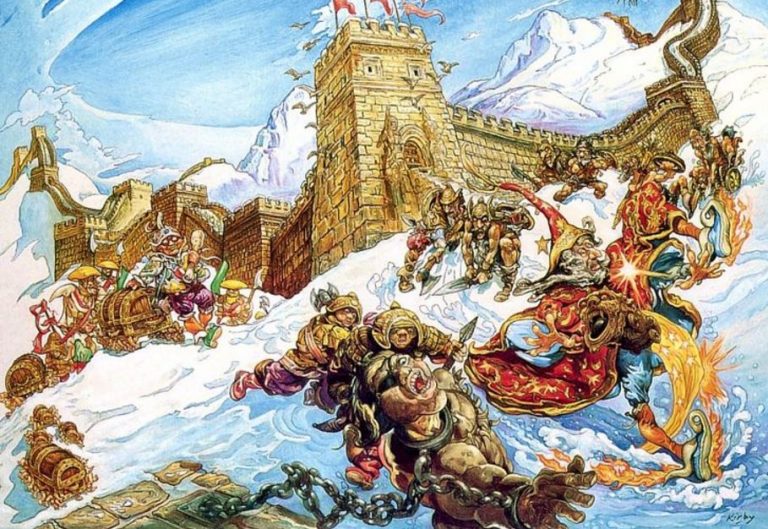 ‘Interesting Times’ was the only book in the series that I had absolutely no recollection of reading. I know that I did, but there is nothing I could have told you about it. I didn’t even remember that the main character was Rincewind; I thought it was a standalone.

In hindsight, I suppose, I am not surprised that my memory let me down here; as you all know by now, Rincewind was far from my favourite character the first time around and this isn’t the most outstanding of his novels. I was pleasantly surprised to find that I did enjoy it, if not quite as much as I did ‘Eric’. Then again, ‘Eric’ is a near perfect work of parody, so it is not necessarily a fair comparison to make. I also read this directly after ‘Soul Music’, which you will remember I was disappointed by, so maybe I am being over generous, I don’t know. It is not an outstanding Discworld novel. It also is not a bad one.

The novel does have two things that stand out for me; it has one of the best openings I have seen so far, and by far the best ending. Almost the first scene is a meeting between those two powerhouses of Ankh-Morpork, Lord Vetinari and Archchancellor Ridcully. It goes exactly as you would expect such a thing between two such men to go and really it is the first time we have seen such a thing in the series; Vetinari has met with Sam Vimes before, but Vimes has been in no position to really be a threat to Vetinari. Ridcully is a man with his own power and he knows it. He doesn’t make allowances for anyone, and I loved the tension. I made a note that the only thing that would have made it better would have been if Vimes or Granny had been there too, but in their absence, the Vetinari-Ridcully face off was something I really appreciated.

The closing scene is a work of comedic timing that is just so delicious, you almost feel as though the entire novel has been leading up to it. Rincewind has been accidentally dropped on the continent of Xxxx (Discworld’s Australia) and meets some men who give him a boomerang. He refuses to take it, thinking it a test and throws it away. You can imagine what happens next, when he is in the middle of a rant about how the universe will no longer trick him. My description doesn’t do it justice, but it is a perfectly rendered couple of paragraphs and is worth reading the whole book just to experience the greatness of the scene.

’ is ultimately a story about power, the people who have it and the people who want it. Fate is the most powerful of all, and he plays chess, whilst most of the others gods throw dice. The Lady, who they don’t even think is a goddess, beats Fate, because she does not play by the rules. The Lady is Luck, of course, and she is the only one who can disrupt Fate’s plans. On a human level, I thought it was interesting that Lord Vetinari and Lord Hong play chess too, because it has been so closely linked with Fate and his power. The men who have the power, ethereal or not, choose chess. It says so much about strategizing and the concept of the necessary sacrifice that you really don’t need to know anything else about Vetinari.

Our old favourite also comes up again here, with a lot of discussion about history and stories and how they repeat themselves. It seems thrown into quite sharp relief here, especially with Fate such a prominent character in everyone’s mind. In the Agatean Empire, they say that the history of the people goes in three thousand year cycles, which is a different interpretation of the theories we have had so far, being by far the most literal in terms of repetition, but I liked it. It adds an interesting twist to an already interesting mix of ideas.