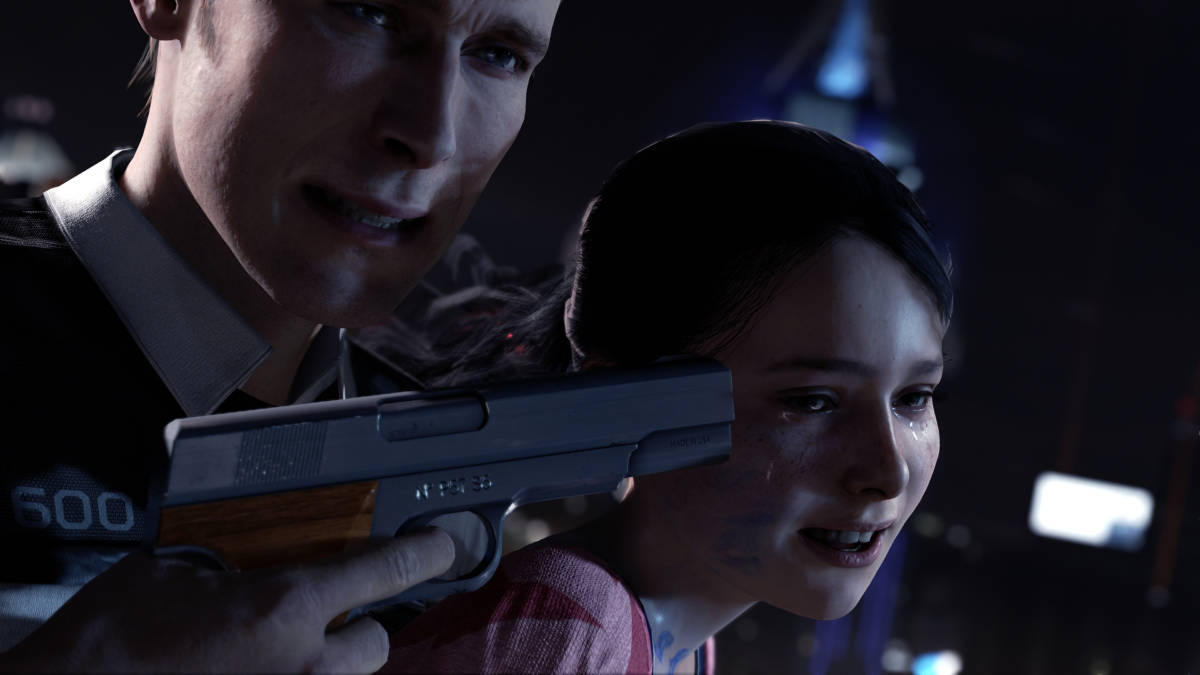 The year is 2038. CyberLife, a company not hugely different from Terminator’s Skynet, has produced millions of androids all across the world. Unlike Terminator, though, these machines seem relatively docile and obedient. That’s until some kind of system failure occurs in random androids, called ‘deviants’, and the idea of humanity comes into question.

Detroit: Become Human begins by dropping us into the shoes of Connor: a CyberLife android given the task of negotiating a hostage situation, in which a rogue deviant has kidnapped a young girl. This will be a scene familiar to anybody who played the game’s demo, and tasks you with collecting information which will increase your probability for success – a statistic prominently displayed on-screen, thanks to Connor’s android enhancements.

It’s a typical David Cage / Quantic Dream choose-your-own-adventure affair that will initially be familiar to anybody who played the likes of Heavy Rain or Beyond: Two Souls. Move with the left stick, and interact with the world by performing various motions with the right. Flick down, for example, to crouch next to some evidence. Then spin the stick in a semi-circle to pick it up. This is hugely simplifying the system, but you get the idea.

Where Detroit begins feeling fresh is with those aforementioned android enhancements. Connor’s ability to recreate prior events and then watch them play out to decipher what occurred is incredibly engaging, and tricks the player into feeling like they’re a hard-boiled detective – much more so than, say, the Batman Arkham games. You might see a gun slip under a counter following a past scuffle, which can then be obtained and used in the modern day if necessary. Or you might just provide a biography for the victim. Even the latter is satisfying, as Detroit: Become Human’s world of 2038 America is a fantastically realised one.

As the story progresses, two more android characters become playable: Markus and Kara. Markus is the caretaker for an elderly artist, whereas Kara finds herself thrust into a dysfunctional household with a drug-addict father and his victimised young daughter. Both are interesting, and both revolve around lofty themes to do with family, sentience, and innocence. Markus’ arguably takes some time to get going, but he’s no less crucial to the plot than anybody else.

At first, these three characters seem jarringly disconnected. This isn’t just because their lives have varying struggles, but is also due to the game presenting the story in a sequence of vignettes that each have a completion screen at the end. This completion screen showcases a flowchart of all your possible options and what percent of other players joined you. It’s a very cool mechanic, but one which serves to interrupt the flow of at least early revelations. It can sometimes feel akin to an ad break in a climactic episode of a TV show, and veers dangerously close to annoyance.

As Detroit continues, however, the chapters become longer and more interwoven. The three protagonists eventually cross paths and affect each other’s lives in numerous ways. The most obvious of these is that actions of Kara or Markus may be investigated by Connor and his begrudging Lieutenant, Hank Anderson; a partnership that develops perfectly over the course of the game’s (roughly) 10-12 hours.

At least for the first half of this playtime, it’s not the story that might dissuade, but the controls. I’m not hugely experienced when it comes to Quantic Dream so this may be the same with all their titles, but the movement for characters is, at times, much too weighty. Turning the camera means turning the player-character’s head, so there’s no option to increase sensitivity. Also, any quick turns when on-foot are an arduous process – thanks largely to the desire for realistic animations. And they are realistic…just a little too much.

Additionally, the game’s controls can sometimes seem to be at odds with the narrative flow. Moving the right stick in a circle or line is fine, but when Detroit requires you to tilt the Dualshock controller to incorporate motion-controls, it can sometimes feel like a hit-or-miss manoeuvre. This was fairly rare, mind, but there were a few occasions when I had to completely abandon an action and try it again, because the PS4 simply wasn’t picking up my hand motions with the controller.

Look beyond these minor logistical niggles, and you’ve got yourself a hugely rewarding narratively-driven title. You develop a genuine attachment to each of the three protagonists, and the constant presence of permanent death (well, mostly permanent) means actions have genuine consequences. Rather than adopting the Telltale Games approach of ‘Clementine will remember that’, Detroit notifies you of your emotional standing with characters after key decisions. This is done with simple terms like ‘leader’ or ‘friend’, and goes a long way towards making the world a believable one.

Once it’s all done with, the game even comes with a robust replay mode that allows you to select not only chapters, but specific decisions within those to begin playing again. This is especially enticing when you see some of Detroit’s decision flowcharts, and the sprawling web of choices you passed up on.

For somebody who hasn’t been an avid follower of Quantic Dream’s prior titles, it’s a breath of fresh air to become fully invested in the lives of Connor, Markus, and Kara. From the opening titles until the closing credits, there was rarely an instance of boredom or indifference; something I definitely can’t say for other story-focused games. If you’ve passed up on these kinds of gameplay experiences before, then I can’t help but recommend you give Detroit: Become Human a chance. Just try and ignore the heavy-handed Martin Luther King Jr. references, and you’ll have a grand old time.

Verdict
This is the first release from Quantic Dream that I've become fully immersed in, and I cannot wait to return to the gritty streets of 2038 Detroit to make alternate decisions. Microtransactions: none
8.5