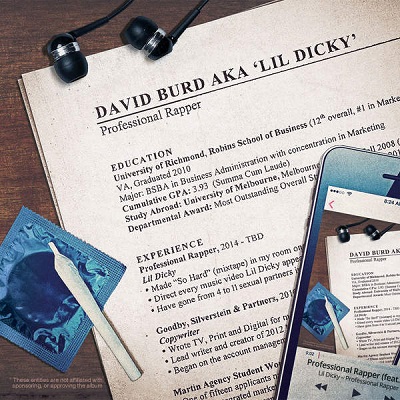 Despite the title of this debut album, Lil Dicky’s first impression makes him come off as half comedy sketch artist, and half, well, professional rapper. This is all by design though, as Lil Dicky has gained a lot of his recognition through his hilarious and creatively brilliant music videos. The album itself delivers on bringing a fresh perspective to hip-hop, as LD is very transparent about his background of growing up in the suburbs, graduating from university and living the corporate life before taking on music full-time. He shows a lot of versatility on this album with several concept-heavy songs that both showcase lyrical talent and a winning personality.

Where this album falls short is its general mood and vibe. There are several moments on here where Lil Dicky is clearly rapping for the comedy, and in some cases sacrifices making a memorable song for a cheap laugh (example: Lonely Island’s ‘I’m On A Boat’ may have been funny when it first came out, but is there anyone still listening to it today?). You get the same sarcastic vibe on songs like ‘Lemme Freak’ and ‘$ave Dat Money’, which makes it hard to take Lil Dicky seriously. The album also has a few musical choices I don’t normally enjoy, such as guest features from Fetty Wap and T-Pain, but even then Lil Dicky is still able to win fans over with the relatability behind what he’s saying in these songs. Overall it’s a solid debut for LD, and I look forward to seeing how he follows this up.

24. Freddie Gibbs – Shadow of a Doubt 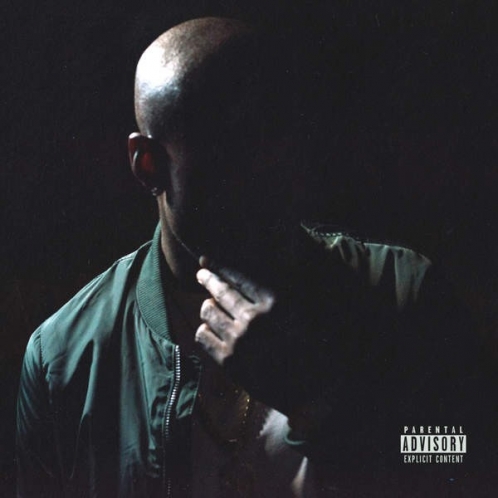 Following up to 2014’s Pinata album with Madlib, Shadow of a Doubt sees Freddie Gibbs continue to try to find his own signature style and experiment a bit with his vocals, as he’s probably the first rapper from Gary, Indiana to get international recognition. Shadow of a Doubt starts off with a traditional hip-hop vibe, as Freddie quotes 2Pac on the first lyrics you hear and later trades verses with Black Thought over a classic hip-hop sample. The experimentation eases its way into the album, as the song ‘Careless’ has Freddie actually singing on the hook, sounding similar to a young Krayzie Bone. The album progressively moves further and further away from that traditional sound as you make your way through it. Pretty soon you’ll hear Freddie rapping over trap beats (with a Tory Lanez hook that can be equally as annoying as a Future hook) and eventually full-on singing for an entire song, sounding like a deep-voiced, gangsta version of Drake.

The experimentation can be hit or miss, depending on what type of fan you are, but what Freddie is doing here isn’t necessarily wack. Even if you’re not into singsong rap flows or trap music, Freddie uses his voice effectively and shows great versatility on this album. Some of his hooks work better than others, but at the end of the day this branching out to different styles will likely grow his fanbase. He’s still all about representing that gangsta lifestyle in his music, as evidenced by the lead single ‘Fuckin’ Up The Count’, and he’s still spitting sharp flows over these beats. Keep in mind this album is still fresh, as it was just released a few weeks ago. 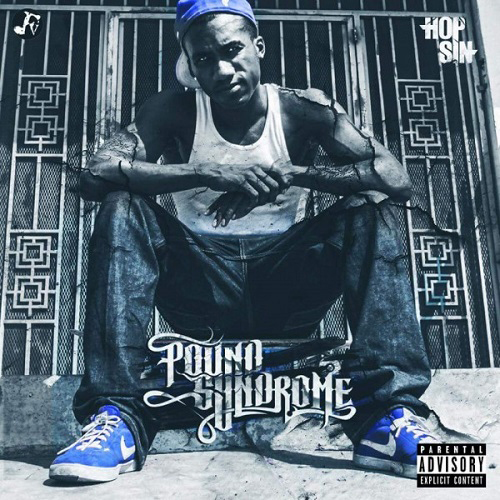 After pranking his fans with a fake retirement, Hopsin returned this past summer with his third album since going independent with Funk Volume. It was bound to satisfy his core fans, as they waited two years to hear a new album from him. Sticking to his usual formula, the album is produced entirely by himself, and the guest features are kept to a minimum (this time with the only guests being within the Funk Volume roster). The good thing about this strategy is that you pretty much get what you’d expect from Hopsin, but the bad is that there isn’t much that’s different that makes you feel any special way about this album. Hopsin is still killing it with sharp rhymes, clever punchlines, and versatile vocals, but the music itself isn’t as grabbing as previous albums.

Don’t get me wrong, the album is amazing the first time you listen to it. The problem here is Hopsin almost gets too focused on the subject matter, so that these songs are about such specific situations that you don’t feel the need to listen to them again unless you can really relate. For example, songs like ‘Ramona’, ‘Fort Collins’ and ‘FV Till I Die’ all have specific stories to them, and once you know the story there’s not much else to make you want to revisit. Other more general songs can possibly bring listeners back if they want to hear about Hopsin’s views on religion, education and relationships, and there are of course the more braggadocios songs Hop is known for, where he’s rapping about rapping. Whether or not you relate to the songs enough to repeat them, Hopsin still stays true to himself and brings his usual emotion, style and sense of humour.

Probably the most ironically titled album on this countdown, Jadakiss’ long awaited fourth solo album was released just a few weeks ago. It’s based on the timeless debate hip-hop heads have about who the top five best rappers of all time are, and Jadakiss has kept his name in the conversation with wicked verses over the years. Jada shows this strength immediately with a dope 48-bar verse for the intro, but the album quickly loses its appeal as you progress through the first half of it. The reason this album isn’t in the top five for 2015 is because of the same problem Jadakiss has had throughout his career; his albums don’t have a consistent vibe to them and he typically relies too heavily on guest features who are popular at the time. Some examples of this are potentially dope songs (dope beat, dope verses) ruined by annoying vocals from Future and Swizz Beatz.

Despite the bad and the mediocre, there is a lot of dope here though, as Lil Wayne surprisingly brings good energy to the song ‘Kill’, and the appropriately titled ‘Synergy’ has Jadakiss and Styles P doing their classic back-and-forth raps. The album really picks up in the second half, as Jadakiss spits at a fast tempo with Jeezy on ‘Critical’ and brings the bars on songs featuring Young Buck, Nas, and his D-Block comrades Styles P and Sheek Louch. This album is still fresh, but my first impression is that Jadakiss is trying to do too much, appealing to traditional hip-hop fans, new wave trap fans, and whatever it is Future does. This approach makes Jada come off as more like top 20-30 to many different types of fans, and top 5 to few. 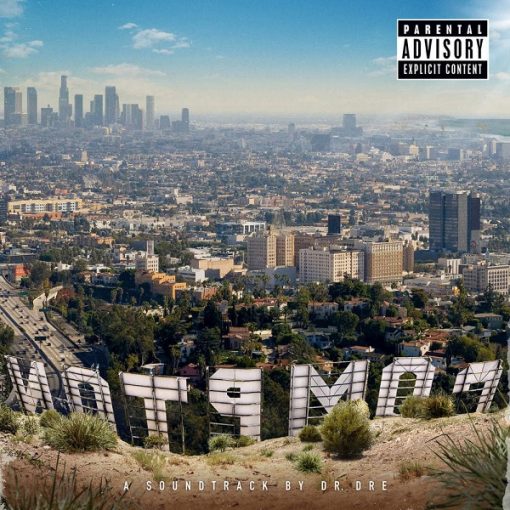 Straight Outta Compton is definitely my favourite movie of 2015 (at least until the new Star Wars comes out), and this surprise album/soundtrack from Dr. Dre was a cherry on top. With over a decade of waiting for the mythical Detox album that was apparently scrapped, my anticipation for a new Dr. Dre album had completely diminished by the time we got Compton, and so I had no idea what to expect. As with all of Dr. Dre’s solo albums, his sound has completely evolved for this project, except this time it’s a bit harder to digest due to the large gap since his last album. Keeping up his reputation as one of the greatest hip-hop producers of all time, this album plays like a movie from beginning to end, and often has that classic 1980’s feel. The thing that may throw fans off is the vocals; Dre gets a bit experimental with trendy trap flows, and often sounds like he’s doing a Kendrick Lamar impression when he raps (K-Dot probably ghost-wrote a lot of his verses). Bottom line, he doesn’t sound like the Dr. Dre we remember from the 1990’s.

This aged version of Dr. Dre has him rapping about how he’s viewed the world over the past decade, including the city he grew up in, the music scene, and racial tensions in America as a whole. The production changes with the message and the beats evolve within the songs. Sometimes the album can be a bit too cinematic though, as there are skits you just don’t want to hear, like a domestic fight causing a woman to get shot, or the scene where we hear Kendrick Lamar drowning for what feels like an eternity. The guests on this album are solid too, as we get to see appearances from familiar Dre associates of the past like Ice Cube, Snoop Dogg, Xzibit and Eminem, and also get to see new artists shine like Jon Connor and Anderson .Paak. Honestly it’s just good to see Dr. Dre finally release a full-length project, and this album will grow on you once you get past the awkward vocals Dre uses on some songs.

Remember to check back here next Tuesday for Part 2 of the Top 25 Countdown!

Did any of these albums make your top 25 list? Let us know on Twitter @CultVultures or @SYpherSights!