The Changing Face of Dean Koontz

For years, I would have said that despite everything I had read (the classroom greats and not-so-greats), Dean Koontz was my favourite writer. I suppose he must still be up there, after all his older books have not become unwritten.

A lot of this was probably due to the fact that he was the author that I took my first tentative steps into a more adult world with, from the likes of Enid Blyton. I remember staying at my aunt’s house and eyeing the books she had on her shelf; I remember King’s Gerald’s Game and Koontz’s The Bad Place in particular. Perhaps with a sense of self-preservation a 10-year-old me wasn’t drawn particularly to King, but The Bad Place sounded interesting. 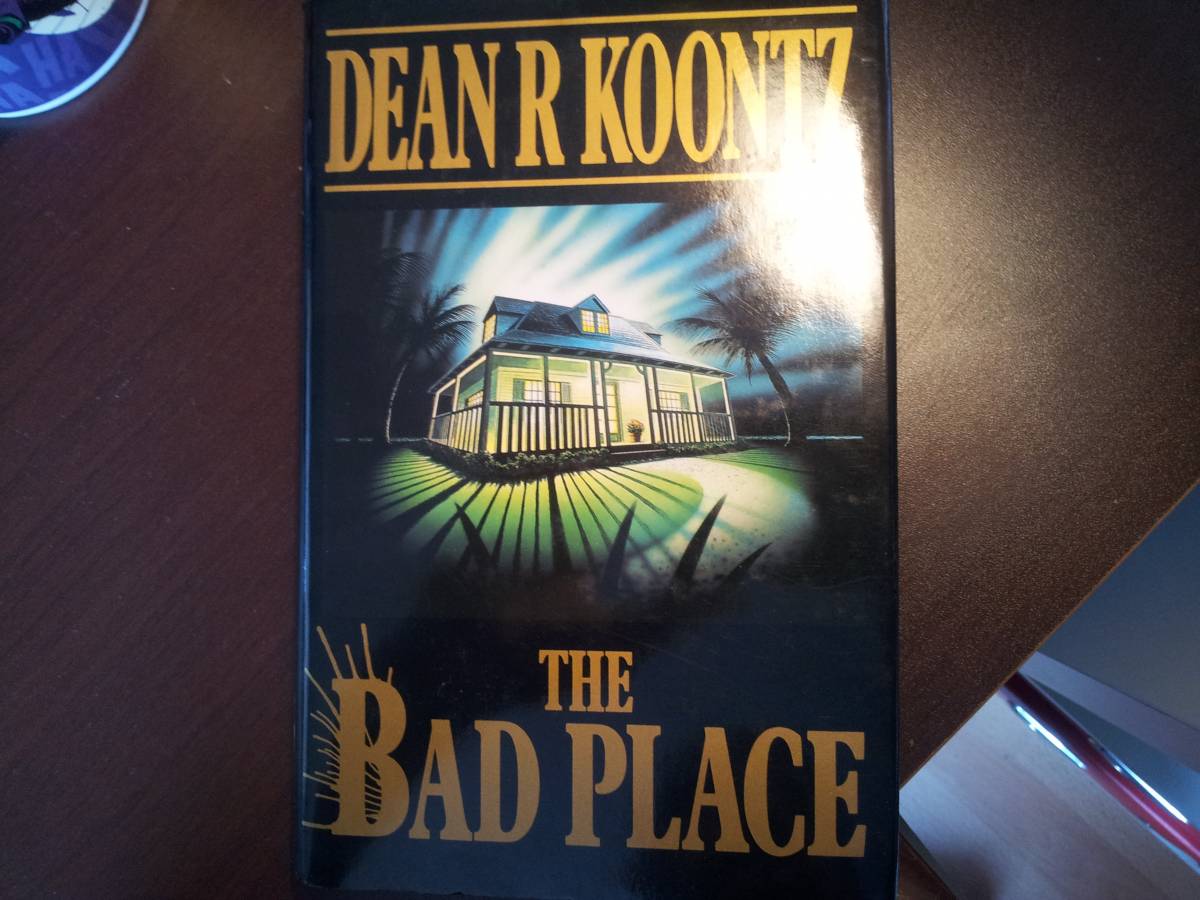 This was the cover – to this day I still prefer this period of Koontz book design. The darkness of the background and the mysterious, looming imagery really struck a chord with young me. I barely remember the plot of The Bad Place, and had to prompt my memory just now. I did remember a kid with Down Syndrome that had special abilities though.

It was such a lurch away from anything I had read before – maybe part of me felt a bit naughty for reading an ‘adult’ book – but then, I wasn’t hiding the fact. There’s something unsaid about children reading adult books, that have no ’18 marker on the front; an unwritten rule that if you’re smart enough to read it then good for you. It’s weird, as a kid, to be confronted with adult themes and an adult world, but done in a very secret way, head tucked between the pages of a book. The adults may watch you read, but they can be ignorant about what you’re reading.

Incidentally, Koontz said something interesting in one of his interviews: that children who read are more likely to develop empathy. It’s difficult to take another point of view or imagine seeing through someone else’s eyes; books are one way to make it possible. They put you inside the mind of people completely different than you, with completely different viewpoints, goals, desires and ambitions. No doubt there are many forces at play, both innate and extrinsic, but I think this may have been a contributing factor to my liberal views.

As anyone who has read early Koontz will know, they can be highly addictive. Imagine being confronted with those page-turning writing techniques as a kid! I couldn’t get enough. I learned early on that this guy knew how to plot for suspense and mystery that got you to turn just one more page. I could see it, but it was fine. I was lapping up the books. The likes of Lightning, The Mask, The House of Thunder, The Servants of Twilight, Phantoms, Whispers, The Door to December, Watchers, Midnight and The Key to Midnight all swiftly fell to my devouring eyes. Listing them off now, I don’t think I can recall even some of the plots, but the titles just immediately take me back to late nights in bed, reading by a too-dim bedside lamp.

At some point I tried and failed with Stephen King’s The Stand. It was too wordy. Too big for me at the time. Too many characters and too much scope – I got lost in the seeming structureless plot. Back to Koontz, please, I said. Koontz was a safe bet – his stories were always intriguing and always had a hook, some ongoing mystery that would resolve itself. It was formulaic, but it worked.

And worked. With Dark Rivers of the Heart, possibly my favourite.

And worked. With Intensity, the best of his movie adaptations.

And worked. With Ticktock, about as condensed an example of the Koontz formula you can get.

But, as any original Koontz fan knows, there was a turning point. Prior to this article I stumbled upon some recent interviews with him, which is what prompted this. He was asked about a turning point too, and on that we both agreed.

I just said Dark Rivers of the Heart was possibly my favourite, but From The Corner of His Eye is the book I first think of when  Koontz is mentioned. Even while I was reading it, I felt like this was a culmination of so many of the themes and ideas that he had been writing about for the past 30 years. It was as though the characters were little bits of all his previous characters, (not too difficult, admittedly, with the line always drawn quite rigidly between good and evil with splashes of humour and humility in the good guys, and barbarism, narcissism and egotism in the bad guys).

“At the age of three, Barty Lampion is blinded when surgeons remove his eyes to save him from a fast-spreading cancer.

At thirteen, Bartholomew regains his sight. How he regains it, why he regains it, and what happens as his amazing life unfolds and entwines with others results in a breathtaking journey of courage, heart-stopping suspense, and high adventure.”

The very basis of this story is rooted in Koontz’s spiritual reawakening, as he’s mentioned in interviews about distancing himself from Catholicism after it tried to gain favour in a changing world by dropping a lot of its eccentricities. Science, some would say ironically, brought him back. Specifically quantum mechanics and discussions he had with physicists and the books he read, over things like the butterfly effect (in layman’s terms) and the seemingly random nature of the sub-atomic. The more he learned, the more it was an example of the divine (as well as some personal experiences we need not go into).

Importantly, it was the sense of inter-connectivity which laid the foundation for From The Corner of His Eye and many of his following books. How one event can have inexplicable effects a thousand miles away.

I was still a boy. 18 years old but I hadn’t really thought too deeply about things. I saw the blurb, and I didn’t see any religious overtones, I just saw the hook, the mystery. And it was like this throughout. I remember lying there after finishing it for about half an hour – it was powerful stuff. Many hate it because of the way the ‘bad’ guy at the end is dealt with so dismissively, and how the story continues on past the climax. But to me, this was brave, and perfect, and a reflection of how evil should be treated in the real world – you deal with it and you stay strong and move on.

The story is laden with the spiritual, but also a certain science, as well as good guys and bad guys and all the usual tricks and devices Koontz uses to keep you engaged. If I read it now, I would probably become just as engaged now as I was then. If one word comes to mind it is ‘balanced’. It was story, it was characters (and for me they’re still the best characters he’s done), it was action and suspense and it all worked in unison.

You can have spiritual/religious overtones but if you don’t want it to be overbearing, it needs to be natural, part of the story you’re telling. From The Corner of His Eye was just this. It was Koontz’s zenith.

It would be incredibly mean and bad-spirited to say it was all downhill from there. And for some just plain wrong. It was simply a change, subtle at first, and then more noticeable. I’m sure readership has only ever gone up, which means he’s writing is still loved and enjoyed, I think, simply, there’s probably a divide in his ‘market’. Some will like everything, past and present, but a majority I suspect will have a preference for post and pre-From The Corner of His Eye. Which is fine. If you don’t evolve as a writer you’re probably doing something wrong.

I’m not saying his stories since the year 2000 have been overbearingly religious or spiritual, of the few I have read that has been there to a varying degree. Standalone, it’s fine. I think my problem is that he hasn’t explored new themes, really, ever since then. If you only read one of his books from any era, you’ll be impressed with the laying of the plot and the suspense, and that has remained. But as much as the story may change, the underlying theme is essentially the same, and with that, so are the characters.

Maybe this will change, or has changed with recent books, but the reviews I’ve read don’t really say this. The last book I read was 77 Shadow Street, and I actually didn’t finish it. Koontz has a certain writing style too which can sometimes push too far, which was evident here. If he’s not mentioning a dog, he’s finishing every fifth or sixth sentence with ‘as if… such and such were clinging to such and such like a such and such.’ As a lifelong fan I can’t say it had ever bothered me as much as it did in 77 Shadow Street, and this was what made me stop.

I often miss the bougainvillea, the SUVs and golden retrievers, but I have moved on. I want to read something new. Ours is like an old relationship, fondly remembered but we’ve both gone our separate ways.