Two decades on, the Brass Eye special remains one of the darkest, sickest, and bravest pieces of television ever aired. 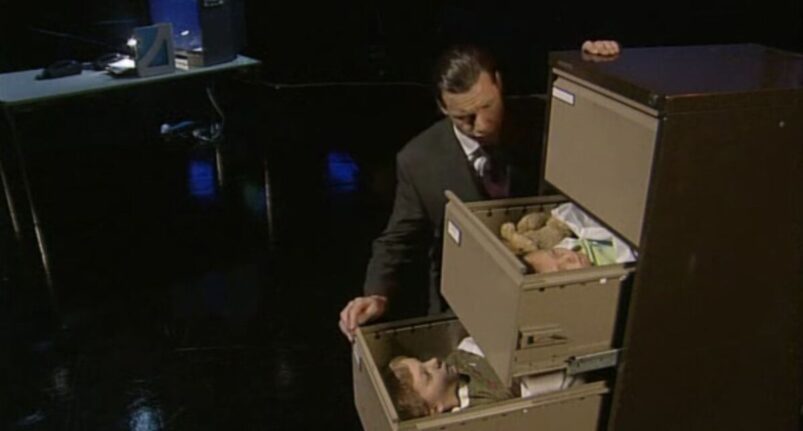 It caused a huge sensation upon broadcast, with the largest number of complaints ever received for a television programme at the time, and numerous MPs labelling it as ‘sick’. Paedogeddon, the 2001 special which rounded off Channel 4’s controversial comedy Brass Eye, was like nothing before or since in how far satire was allowed to push against social taboos. But, 20 years on, is it worth revisiting?

The special aired twice towards the end of July in 2001, before Channel 4 quickly issued an apology for any offence it may have caused with the broadcast and shelved any further repeats. The special came as a one-off follow up to the initial six-episode run of Brass Eye, aired four years earlier, which looked at different social and moral issues through the same anarchic, darkly comic lens that creator Chris Morris had brought to other shows such as The Day Today and Jam.

With its mix of the most brilliantly absurd and twisted set ups, along with ludicrous graphics and parodies of the over the top, gimmicky film-making used on the news, Brass Eye provided the perfect satire of the sensationalism saturating much of the news media at the time, and which is perhaps even more noticeable now.

From the start, Brass Eye attracted controversy: from the pitch black, bitingly offensive style of humour present throughout – one sketch banned from the original broadcast portrays a musical written by and starring ‘Yorkshire Ripper’ Peter Sutcliffe – to the way in which it duped numerous celebrities and politicians into advocating for all kinds of bogus causes.

Perhaps most infamously, David Amess, a sitting Conservative MP, was fooled into actually going so far as to speak in Parliament about the new designer drug ‘cake’ – a plate sized yellow disk supposedly capable of making people cry all the water out of their bodies. But the debate around these moments would be nothing compared to the uproar created when Brass Eye ended up being brought back for a one-off based entirely around paedophilia, and the moral panic surrounding it.

Given the nature of the material, it was always something that was going to push plenty of people’s buttons, and which of course was all too easy to attack as being sick and tasteless. It’s extraordinary that this was something Morris was able to get commissioned in the first place, but then that’s true of half his work.

The episode, taking place over half an hour, portrays attacks on children as an epidemic. It conjures up nightmarish visions of offenders being reanimated through robotics, blasted into space, or placed in a Love Island-style scenario with numerous children for the amusement of television audiences at home.

At the same time it mocks the hysterical reaction from the rest of us – the jubilant explanation by one newsreader of how any child approached by a stranger is equipped with a capsule that then ejects litres of raw sewage over them, is comedy gold.

Even for fans of Morris’s work, Paedogeddon makes for uncomfortable viewing. Predictably, there are some incredibly dark jokes in here, such as when Morris’s character takes offence at a paedophile not being interested in his son “because [he] doesn’t fancy him.”

There are few offences as horrific and as hard to handle as child abuse, and there are numerous scenes where it feels like the special may just stray too far; from one moment where we see the recreation of the kidnapping of a child being shot and edited like some high-energy rock video, to faux footage of a 1970s glam band singing about kids – something which just feels far to horribly real in the years after the death of Jimmy Saville and Operation Yewtree.

But as hard to watch as it may get at times, it’s clear throughout that, as with the rest of Brass Eye, what the Paedogeddon special truly parodies is the reaction both from the media and the rest of society, and of how things can get sensationalised by the press, as well as how easy it is to whip people up into a frenzy over hot-button issues such as this.

The clue is very much in the name with this one. Whereas previous episodes of Brass Eye were named after the particular issue they were covering – crime, animals, drugs – the special isn’t simply titled ‘Paedophilia’, but rather ‘Paedogeddon’, giving the image of it being an apocalyptic threat that’s everywhere, around every corner.

Brass Eye was infamous for its use of politicians and celebrities advocating nonsense, and Paedogeddon was no different. It featured the likes of Gary Lineker repeating, with a straight face, ridiculous statements such as “genetically, paedophiles have more in common with crabs…there’s no actual evidence for this, but it is scientific fact.”

These moments are great comedy in and of themselves, but they also serve to hammer home some really important points. One of the politicians who appeared in the special, Labour MP Barbara Follett, actually lodged a complaint with the Broadcasting Standards Commission after she’d been duped into reporting about how the eyes of an animated online dog could supposedly be hacked and converted into webcams by online paedophiles. The complaint was ultimately rejected precisely because of how it showed that MPs were willing to talk, with authority, on something they know nothing about, and which only a minor amount of research would have shown was complete nonsense.

Scenes such as this exploited just how ignorant people were around things like the internet (still relatively new at the time), and showed just how quickly they could be riled up and encouraged to voice opinions on issues without actually being informed, or considering the information they’re given.

As well as having celebrities come out with these ridiculous statements, the special also presents vox pops getting the views of the average man on the street. One focus group are posed the question “can I have sex with this three year old girl now that she’s 21?” The reactions (“no way…you should be in a mental asylum”) show exactly how little these people have actually listened to what they’ve just been told before blurting out an answer.

Two decades on, there’s still been nothing else quite like Brass Eye. Much of it is tasteless, of that there’s no doubt, but if there’s one thing that good satire shouldn’t be, it’s safe. There’s little in television which can still feel revolutionary or transgressive 20 years after first being broadcast, but Brass Eye consistently does.

So much of satire in the current TV landscape seems to rarely try for anything beyond a few witty asides about a particular political party or government, or what’s in the news at present. Contemporary comedies like The Last Leg or The Mash Report are good for the kind of light entertainment and analysis that they are, but too often they boil down to a bunch of clever, charismatic comedians all unanimously agreeing amongst themselves that Boris Johnson’s an arse, and inevitably coming off as a little smug and self-righteous as a result. Those watching in the audience applaud them for being in the right, and screw what anyone else thinks.

The Paedogeddon special didn’t do that – on the contrary, so much of it is wrong, and it gleefully revels in being so. The sketches in it are absurd and utterly out of step with reality, and the presenters far more hideous and cruel than anyone they might be interviewing, but it’s far more devastating for this.

Paedogeddon seemed to be the swansong of Morris’s career in television (besides appearing in The IT Crowd, and co-writing the little-known Nathan Barley, he’s since gone into film with movies like Four Lions), and it’s no surprise there has been little like it since, following the level of outrage it provoked. But at the same time, it’s a shame that there’s been so little in the past two decades that’s even half as daring, or as willing to take risks as it was.