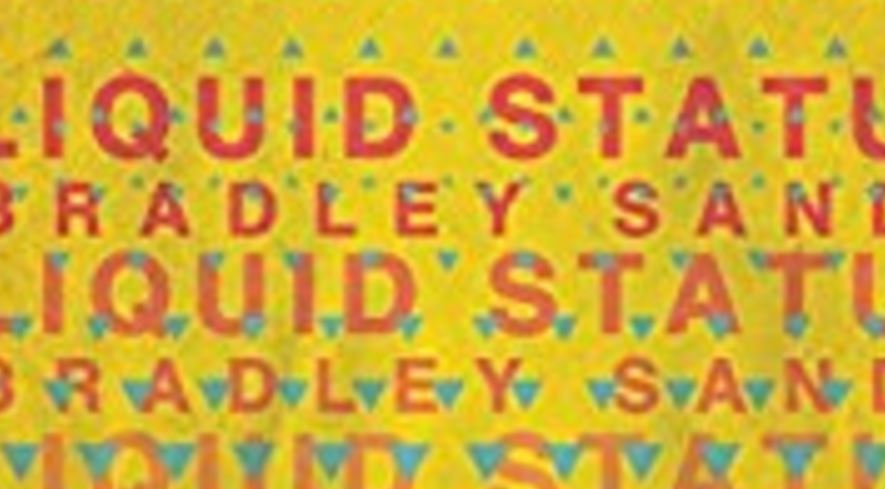 A family lives in a house with no basement. After the Grandma dies, the front door disappears. The Dad tries to force his way out, but the outside seems to have vanished completely. The family is trapped and reality itself seems to fall apart inside the house.

“The front door ages, retires, and dies, leaving behind a severed doorknob. It is an antique.”

Like Bradley Sands’s other works, Liquid Status is mainly a comedy. Much of the humor comes from the ridiculous manipulations in reality that the house inflicts on the family. One of the sons turns into a cardboard box, another switches consciousness with his Mom, the dead Grandma turns into a Slip N’ Slide. The Dad tries to escape the house’s manipulations by spending time with his alternative family in the attic.

Through the humorous dream logic, Bradley Sands examines the dysfunction of the family. For example, we find out that the Dad has an entire alternative family that he keeps up in the attic. He views this family as being perfect and entirely free of conflict, unlike his family downstairs. When he inadvertently makes one of his alternative children cry, he realizes that this family is not so perfect and murders them all. We learn that he previously tried escaping his family drama by going to the movies. When that stopped working, he got a whole other family who he perceived as perfect that he kept hidden in the attic. He attempted to escape into fantasy to avoid dealing with his problems. When it no longer works, he’s forced to confront his real family.

The Mom plays the role of trying to keep the family together. She keeps strict and sometimes ridiculous rules to keep order. When the rules go out the window, she tries losing herself in her domestic chores. Like the Dad, her attempts to escape the family’s problems are ultimately futile.

The two brothers, Matt and Paul, don’t consciously attempt to avoid the problems of their dysfunctional family. Like any children in that type of family, they simply want to go on with their lives. They enjoy their own little worlds that the house creates for them, but are pulled back out by the family’s drama. At one point, Paul switches bodies with his Mom. Dad, not knowing this has happened, has sex with what he thinks is Mom, shocking and disgusting Paul. The father has damaged his son, not even on purpose, but through miscommunication.

The ending is one of the most interesting parts of the book. Each member of the family merges into a separate part of the house, the Mom the attic, the Dad the front door, Paul the bathroom, and Matt the living room. This could be interpreted as either reconciliation or as the family permanently falling apart. They may have united and become a properly functioning family. They also may have become completely separated into their own parts while still bound by the inescapable fact that they will remain related by blood.

Verdict
Bradley Sands's Liquid Status is a short read, but well worth picking up. It's hilarious and surreal exploration of the dynamics of dysfunctional families. If you enjoy mind-bending literature, this novelette is a must-read.
9
Cultured Vultures is a pop culture website established in 2013 covering all things gaming, movies, and more. We eat your words.
All The News On The Biggest Games