Black Lives Matter, Deus Ex and Problematic Art: Can it Be Justified? 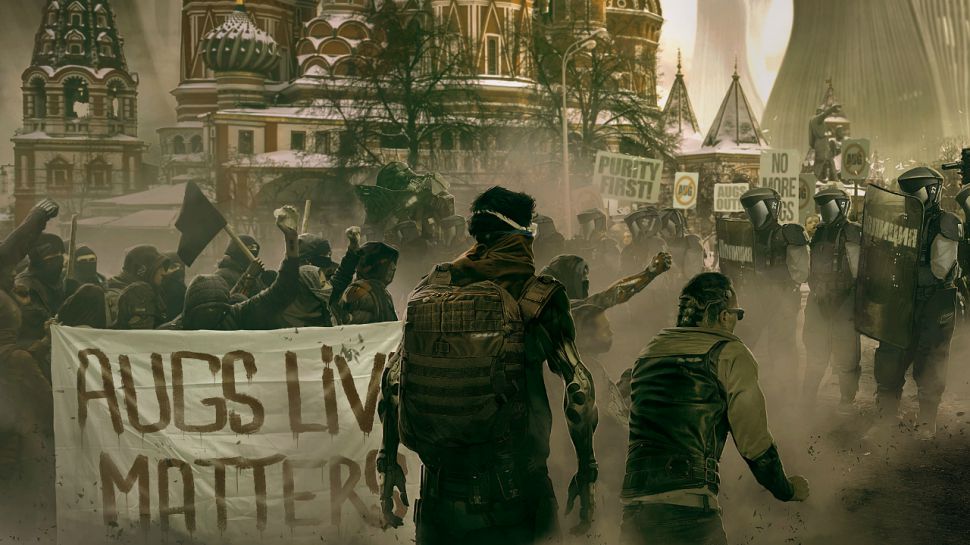 Over the last week or so, the Deus Ex franchise has come under fire for using the term “Augs Lives Matter”, an appropriation of “Black Lives Matter”, in their promotion material. On Twitter, Eidos Brand Director Andre Vu and Bioware Games Developer Manveer Heir argued past each other over the use of the phrase. You can get up to speed on all that here.

The Deus Ex games essentially deal with Transhumanism, the belief that humanity can transcend its physical, mental and social limitations through the explorations of new technologies. Past games have dealt with corruption, systematic chemical dependency in segments’ of society and identity. Doubtless Deus Ex: Mankind Divided is going to tackle current issues. It’s in the name. It would be dumb if they didn’t. If they don’t I’ll eat all my words, but let us assume for the time being the game is thematically similar to its predecessors and not about a dog grappling with its first novel or some such thing.

The easiest point to dismiss is that ALM somehow diminishes the importance of BLM in the same way that reactionary movements like Blue/All Lives Matter. These movements lampoon and ignore the treatment of African-Americans under the guise of equality. ALM, on the other hand, expresses the same concerns in a science fiction setting. This doesn’t mean that we don’t have to take BLM seriously, or that we should genuinely worry about augmented humans (not yet at least). Like all great speculative fiction, Deus Ex uses “what ifs” to hold up and analyse “what is”. Tragically, society is still struggling with race relations and it’s important that our fiction deals with this through analogy, metaphor and adoption.

Some have argued that ALM is too direct an adoption of BLM. But why should this be the issue? The real world problem, taken extremely reductively, is that a set of people are treated differently based on a physical difference. Same with the fictitious issue. Sure it doesn’t have the same effects on lives but they both point to the same ridiculous truth of prejudice. Moreover and moving back to speculative fiction, was Orwell’s 1984 to close to the subject matter? Or Godzilla or The Handmaids Tale or District 9? Heck, in a previous article I’ve talked about comics addressing WW2 before some nations did (America, I’m looking at you). The closer to the bone, the stronger the analogy. Using real word terms in fictional settings only helps to demonstrate how dangerous, volatile and ultimately weak humanities cruellest aspects are.

Of course, I write from a point of privilege. It would be fair to argue that even though I support BLM, a white guy from the North of England is hardly going to feel the same betrayal from ALM as an African-American. That’s fair. But, for the reasons above, I don’t think art in of itself or discussion of ideas has to consider feelings in that way. Using that art for personal gain, however, does.

This is part two of the problem. Was using ALM in the marketing of Deus Ex: Mankind Divided the wrong thing to do? Here, I think this comes down to intention. Vu claims that the use of the image in question was a coincidence; Heir argues that there must be a deliberate attempt to cash in on BLM, or at the very least whoever okayed the image is bad at their job. Let’s pass over the last point. If it’s a huge mistake by the work experience kid then I think we have to accept that a move on and hope they aren’t left in charge of anything with moving parts.

So, If we give Vu the benefit of the doubt, we might say: “the societal struggle in Deus Ex, is at the core of the game. The Deus Ex games are loved for having strong philosophical and ethical ideas, and to tap back into that fanbase any promotion shot should contain these elements. Critiques from rival publishers should be taken with a pinch of salt.”

If we want to take Heir’s side we’d argue “Eidos are going to make cash from an associated to the Black Lives Matter movement”.

If we want to take a middle ground we’d have the first statement followed by the second. It’s all a matter of what you think the intention is. Vu has argued that he is aware of the current tensions and Eidos is not deliberately exploiting them.

Aside from cynicism I’ve no reason not to believe him. I don’t think the creative team around this game would put all the effort into exploring these arguments and worries and then take advantage of them. It would imply an exceptional level of cognitive dissonance associated only with despots and presidential candidates.

The unfortunate truth is that art doesn’t exist in a vacuum. It can be extremely problematic, and if it’s genuinely thought-provoking, it can be morally good and bad at the same time. Here we are caught between the game and game industry, between creation and capitalism. The very fact this article exists means that Eidos has had some free advertising, maybe even made some money. And it’s a shame that that fact is going to upset people, but this exposure could, just maybe, change how someone sees the world for the better. Gaming megacorps make huge amounts of money because they have such a vast reach, but if money is flowing one way new ideas are flowing the other, maybe it isn’t so bad?