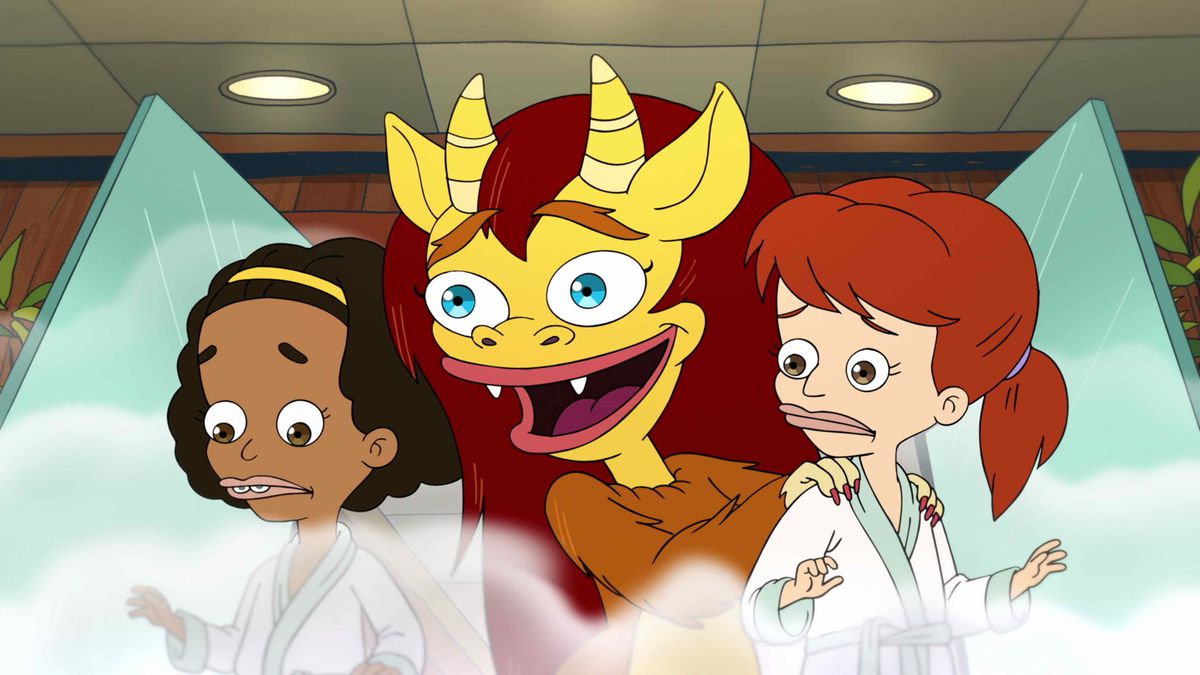 Love it or hate it, Big Mouth continues to be a strangely necessary show for the world today. Vulgar, profane, and well past the point of provocation, it’s a series that quickly moved past the “funny because it’s an adult cartoon” shtick to become an almost straight up educational program. Big Mouth never shies away from getting to the harsh truths about what it means to go through puberty, the intricacies of sex and sexual desire, and growing up with irrational, hormonal thoughts dominating your mind. By not being afraid to lean into these truths of what goes through the young and confused minds of adolescents, Big Mouth’s second season is able to transcend beyond the foundation that the first season built.

The comedy stylings of Big Mouth rely heavily on the genius of series creator, writer, and star Nick Kroll (Captain Underpants, Sausage Party, Kroll Show). Voicing up to a dozen different characters, Kroll steers the ship into taboo waters of all kinds. Discussed in often absurd, cringe-inducing, fourth wall breaking, uproarious fashion, Kroll and the rest of the cast and crew tackle subjects such as consent, masturbation, women’s reproductive health, public humiliation, slut-shaming, and sexuality. These are things that are rarely ever discussed (or didn’t used to be), much less on television, and it’s astounding to witness a wacky animated show be an honest to god educational guide on some of these subjects.

Big Mouth doesn’t exactly try to sneak in its vital lessons and messages, but it certainly also does its best to not beat you over the head with them. It’s a nearly educational program for young adults (but certainly something that full grown adults could benefit from watching as well), and it’s unclear whether that was always the intention or not. Regardless, there’s plenty to learn while howling in laughter at the plights of Nick (Kroll), Andrew (John Mulaney), Jessi (Jessi Klein), Jay (Jason Mantzoukas), and Missy (Jenny Slate). Almost all of the show’s jokes land due to the immense talent and performances of the cast. They’re energetic, sharp, witty, and outrageous, but most importantly, every character feels real and alive rather than existing as one-trait caricatures.

Coach Steve (Kroll again), the sexually illiterate (and illiterate in general) man-baby who lacks any understanding of, well, anything, gets boosted to main character duties this season. The writers obviously seem to know that he’s the funniest character on the show, and Steve’s total lack of awareness, knowledge of any subject, and the impractical (to say the least) ways he goes through everyday life are cranked up to their highest settings. Of course, the crazy and random quotes and antics of the character can easily become too much to the point of annoyance, and while Big Mouth teeters dangerously close to that edge with Coach Steve, it knows when to pump the brakes and pull him back for long enough chunks of time.

One of the most clever devices that the series uses is its personifications of the kids’ thoughts and feelings, such as the various iterations of the Hormone Monster. Adding to this, season 2 brilliantly introduces the Shame Wizard, voiced magnificently by David Thewlis (Harry Potter, Wonder Woman, The Boy in the Striped Pajamas). The Shame Wizard arrives to poke and prod at every little insecurity and flaw within the kids, driving them to decisions that often end up worse than the things that even the Hormone Monster coerces them towards. The Shame Wizard works so well because he’s something that lives inside every one of us, making us feel remorse and guilt over any action. While some of these thoughts and feelings are, naturally, justified, the series shows that some are downright irrational or unfair to ourselves, leading some characters to sink as far down as depression. Both the Shame Wizard and the Hormone Monster are used to tell the harsh truths about life that Big Mouth excels at (albeit in a mostly joking manner), and it almost successfully brings the series to the point of other reflective and brutally honest animated shows such as BoJack Horseman and Rick and Morty.

If Big Mouth falls short anywhere, it’s in its lack of approaching subjects such as race and discrimination. The show isn’t about those things, focusing mainly on sexuality and puberty, but for a series so progressive-minded, liberally outspoken, and willing to talk about several taboo subjects (there’s an entire episode this season dedicated to teaching you about Planned Parenthood, and it’s one of the most important episodes of television this year), it seems like a missed opportunity. Maybe it’ll eventually get to topics such as those in later seasons, but maybe it won’t. The only reason anyone might bring it up is for the fact that the character of Missy, a young black girl, is played by Jenny Slate, a white woman. BoJack Horseman faces a similar controversy (Diane, an Asian woman, is voiced by Alison Brie), but it’s an issue that fans have long discussed and that the creator recently talked at length about. I have yet to see Big Mouth fall under the same level of scrutiny. Slate is an incredibly talented actress and her performance as Missy is one of the show’s highlights, but the fact remains that it can be somewhat problematic for a black character to not be played by a black actress, especially if the show ever chooses to broach a subject such as race.

Season 2 of Big Mouth expands on the world and characters that the first season created in every way. It has a lot more to say and teach its audience (the show often feels like the sex education that you never actually received in school) than before, the characters become much more fleshed-out so that when drama happens, it never appears ingenuine or overly melodramatic, and you feel for them and relate to them when they get embarrassed or even humiliated. It’s as funny as it’s ever been, but more than that, Big Mouth Season 2 feels oddly important.

As ludicrous as it might sound, it should be required viewing for teenagers and even most adults. Its ability to teach uncomfortable lessons about sex in a wildly entertaining way is impressive, and the fact that you can learn more about sexuality and sex in general from an animated comedy series says a lot about how the sex education programs of this country failed all of us and continues to fail the future generations. Give it a watch, but I apologize in advance for you having to learn what “thick in the warm” means.