There is nothing as awkward as an interview between two ferns. 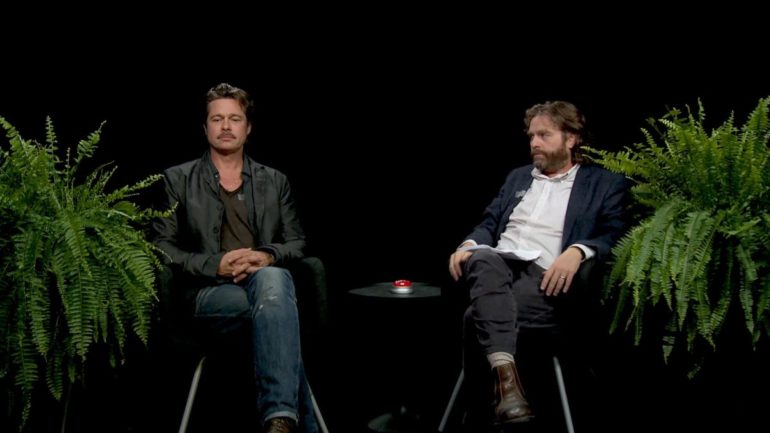 Netflix has responded to our absolute fantasy by giving us a movie of the web series Between Two Ferns, and while we are not worthy to receive more than an hour of content, I for one am certainly not complaining that we are getting a movie of Zach Galifianakis making celebrities feel uncomfortable. Scripted or not, it is just entertaining to watch. While we wait for September 20th, 2019 to come along so we can stream it on Netflix, here are 10 episodes of the web series to tide you over till then.

For some reason, Galifianakis decides to invent a twin brother persona for his interview with Sean Penn (I’m kidding, I know why – pure hilarity of course), and Penn is enjoying none of this. Sometimes the celebrity plays along and pretends to be offended, but in this case, it does seem that Penn was truly annoyed. He does threaten to knock Galifianakis out in his chair.

While Penn could be playing along, according to this article on Grunge, producer Scott Aukerman mentions how “things got really tense in the studio. [He] ha[s]n’t seen Sean Penn since then, but quite honestly, [He’s] afraid to ever see him again.” Yikes. However, the silver lining to this is how entertaining this episode gets because of Penn’s fury. We appreciate Galifianakis’ bravery for the sake of art.

If you think Galifianakis is going to take it easy on Brad Pitt because he’s, well, Brad Pitt – think again. Galifianakis tells Pitt he looks like “Hitler’s dream”, and even has the gall to use the Friends theme song when asking Brad Pitt about how he fell in love with Angelina Jolie. We all know that Pitt left Friends star Jennifer Aniston to be with Angelina Jolie, and to reference this right in Pitt’s face is a bold move. Unlike Penn, Pitt remains cool under pressure, responding to Galifianakis’ jibes with moves of his own.

Penn was raged up, while Pitt was cool under pressure. Bradley Cooper, on the other hand, is just so loveable and effusive in his segment with Galifianakis. As he chatters on about his roles in Wedding Crashers and Failure To Launch, Galifianakis is just so over it, which is hilarious given how they had just worked together on The Hangover. There is also an appearance from Carrot Top, offering a glimpse into how absurd the show can be.

Galifianakis mentioned in his GQ Undercover interview that this was one of his favourite episodes, saying that Theron just showed up by herself, with a pack of cigarettes, no make-up on and didn’t bring a whole team of people with her, coming across as just the coolest person. The interview itself is made all the more funny because nothing none of Galifianakis’ insults falter her, even when he is plugging a product by covering her face with it. She makes all these sexy comments to Galifianakis, and it’s really fun to see him get all flustered and unsettled by her flirting.

While most of the guests wait for Galifianakis to make his hits first before they retort and fight back, Carell decides to preempt that and just comes out swinging with the fat jokes. Even after Galifianakis claims all he wants is a straight interview (after he insults Carell’s nose), Carell still doesn’t ease up, finding numerous ways to call Galifianakis fat. Nothing beats watching two comedians go at it, showcasing their dose of humour and entertaining us at the same time.

Out of everyone on the list, Ben Stiller manages to deliver the most realistic performance. If I didn’t know any better, I would have assumed that he was really disgruntled, instead of merely pretending. From asking inane questions about whether there is a car in the movie Stiller is promoting, to requesting Stiller to do “his blue steel look from jewlander”, it’s just a massively absurd ride from start to finish.

Conan O’Brien is such a seasoned host and comedian that it’s pretty difficult to stump him in any way. Galifianakis tries valiantly and manages to get Richter to almost crack when he mentions they have the same sit-up coach, but O’Brien keeps up and gives just as hard as he gets. He likens Galifianakis to papa Smurf and the Michelin man, and all he can do to silence O’Brien is to play the sound effect of crickets on tumbleweed.

This interview was also done during a small period of time when everyone thought Conan O’Brien was going to be hosting The Tonight Show for a very long time, only for him to end up leaving after Jay Leno was returned to the 11.30pm timeslot.

Bruce Willis is an intense guy, so it makes sense that the episode with him in it would have Galifianakis literally catching fire. Before this mishap, Galifianakis gets a few good jokes in, like the mention of Ashton Kutcher in relation to Willis’ daughters (Kutcher was dating Willis’ ex-wife Demi Moore) or asking him if he knows that some actors can turn down roles. The lack of response from Willis until the end gives the episode quite a bit of tension, and for a moment we think we might have a Sean Penn incident on our hands, but luckily, nothing gets as awkward as that.

Nothing can be as uncomfortable as watching Zach Galifianakis try to flirt with Natalie Portman and fail miserably. He asks the most inappropriate questions and wonders about how she communicates with Chewbacca. All these embarrassing moments are made all the more hilarious when the camera focuses on Portman’s dog just lying still on the floor. It’s not a German Shepherd, by the way.

I can’t have a list of great episodes from Between Two Ferns and not include the most well-known one, conducted with former US President Barrack Obama. Mr Obama might not be a comedian, but he holds his own with Galifianakis, praising Bradley Cooper’s performance in The Hangover movies and criticizing the third Hangover movie (as he rightly should).

He also got to promote the health care exchanges, the online arm of his “Obamacare” legislation that helped people find insurance, which was his main aim of being on the show. The first day the show aired, 11 million people watched the episode and traffic to Healthcare.gov spiked by 40 percent. The former US President got what he wanted, and we too got an episode that is so ridiculously absurd it never should have been, which is basically Between New Ferns in a nutshell.