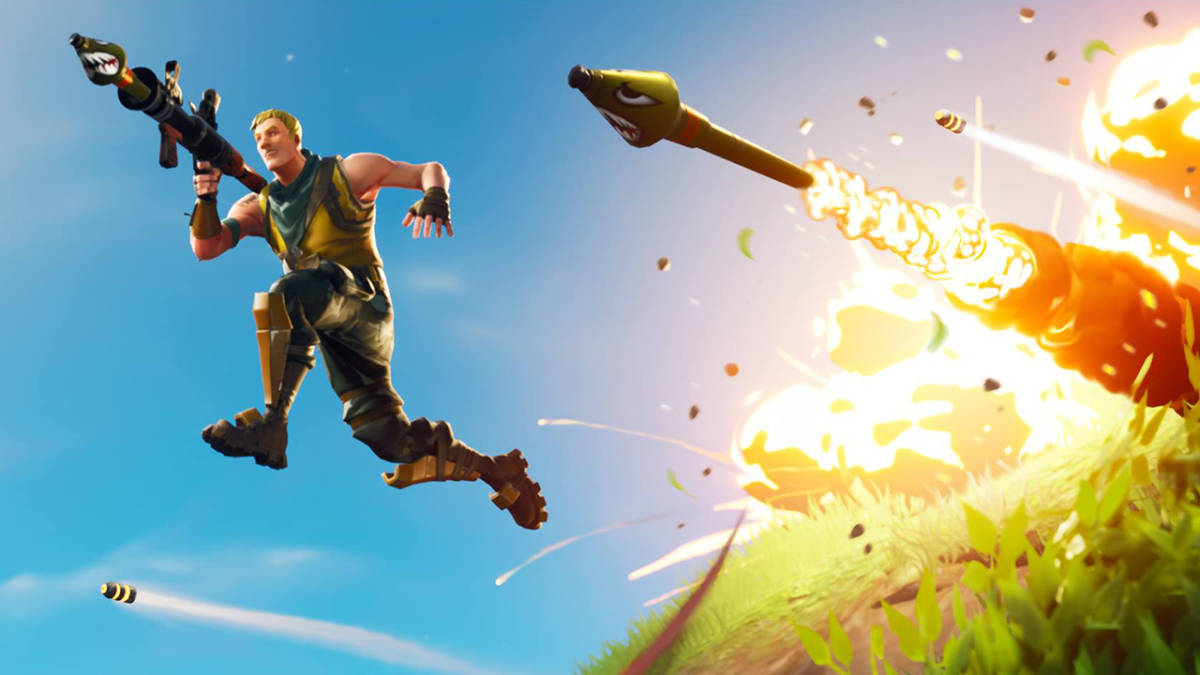 As a constantly evolving and changing game, there’s no shortage of the best Fortnite weapons to choose from. While some are better in the right hands, others are good for all occasions for players of all skill levels. Apart from fellow Vulture Darryl, of course, who has a hilarious habit of exploding himself with the Rocket Launcher, or boxing himself in and then throwing a grenade instead of healing. He’s a special character, is our Darryl.

If you’re new to the game or just haven’t become acclimated with its various weapons, we’ve rounded up the best Forntite weapons and ranked them based on ease of use, reliability, and the all-important damage they provide. Bear in mind that this may well be redundant by next week: Epic have a habit of tweaking and changing things based on player feedback. For instance, the Compact SMG would have rampaged to the top spot just a few weeks ago.

Any of the best Fortnite weapons we missed? Should a different sniper rifle or shotgun made the cut? Be sure to let us know and we’ll 1v1 you on Playground. 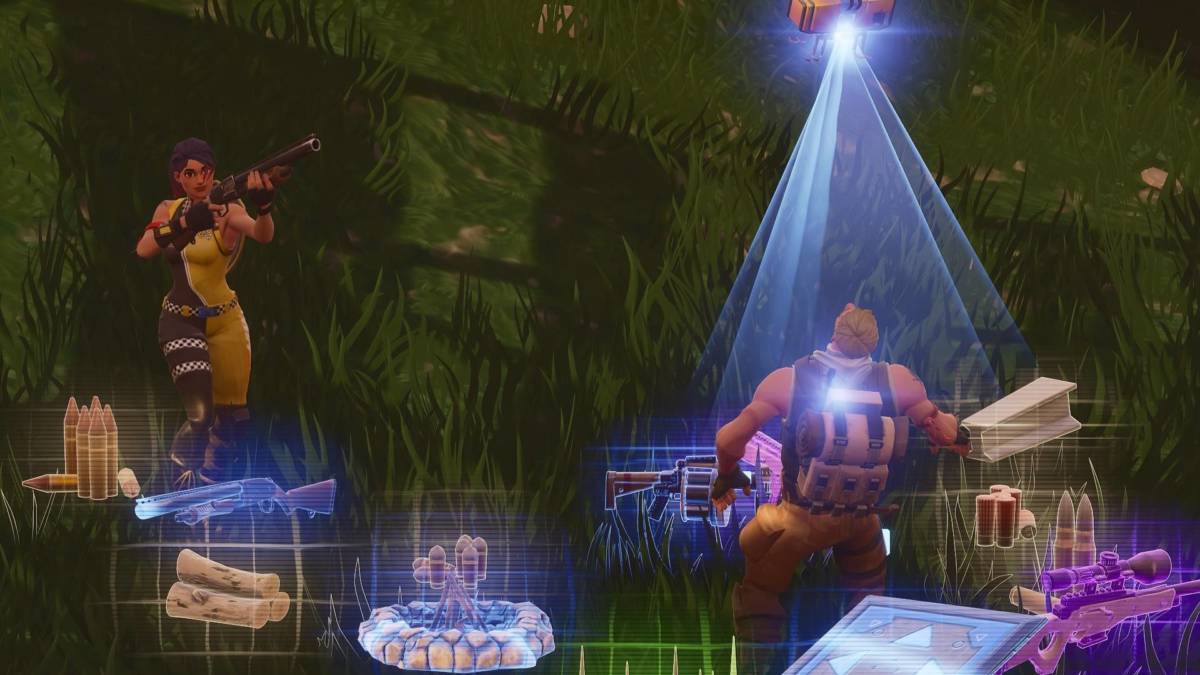 This is far more fluid for PC players and ultimately depends on player preference. However, with playing on console being a little on the limited side due to not being able to individually bind inputs, the following is the best way to organise your Fortnite weaponry.

A useless hunk of junk when it was first added to the game, Fortnite’s Minigun received a more than mini patch to make it worth your time. Thanks to it taking a while to fire up, it’s a bit risky in close quarters, but if there’s a base that needs to be taught a lesson, it’s one of the best picks.

The Minigun is able to positively shred through most structures and suppress the enemy until they either run out of mats or make a mistake. It’s very annoying to come up against thanks to it not having to reload; you only have to stop shooting when you run out of mini bullets, which are the most plentiful ammo in the game. For the love of Christ, though: don’t just stand out in the open when you’re using it. 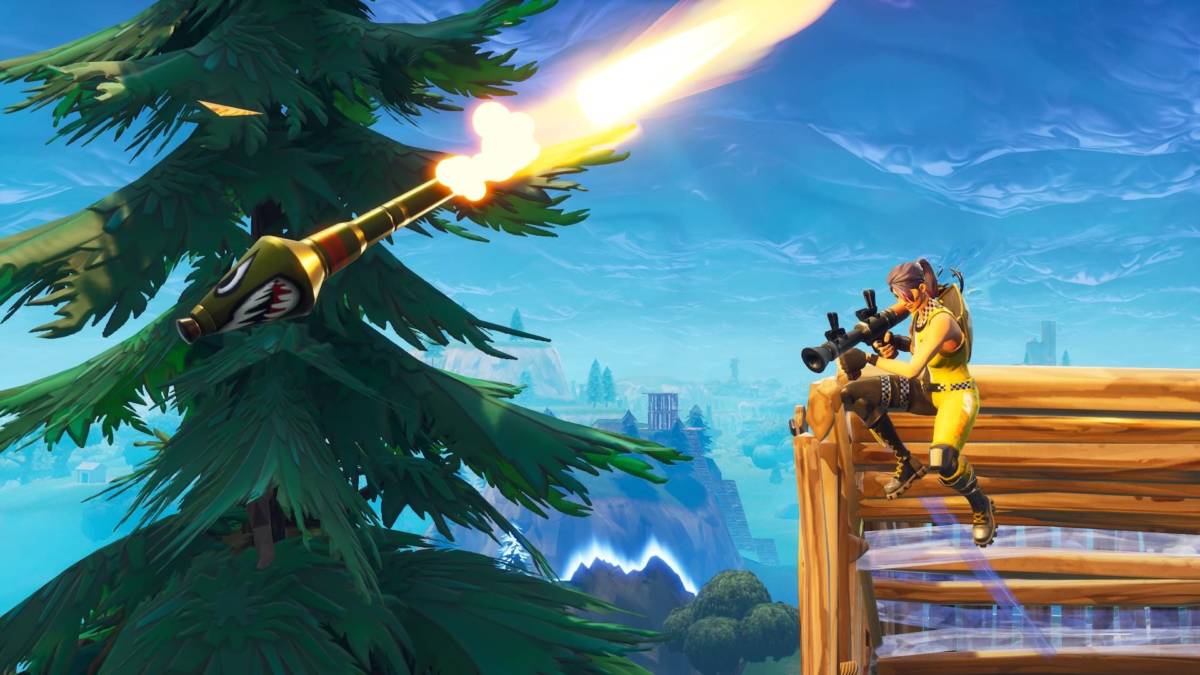 Some of you may be surprised to find the Rocket Launcher so low when talking about Fortnite’s best weapons, but it’s not as good as you think. Despite what some may believe, it’s not a one-shot thing and has a relatively slow reload time. As well as that, it’s also too easy to depend on it if you have one. Often, the Rocket Launcher can do more harm than good and even ending up causing your end (hi, Darryl).

However, if you know what you’re doing, Fortnite’s Rocket Launcher can be a game-winner. It’s able to break down most structures with a couple of rockets to its base and can also cause huge damage to opponents. Having explosives is key for the late game of Fortnite — unless you want a less than thrilling snipe-off — and the Rocket Launcher is one of the best options for just that.

Pros: huge structure and enemy damage.
Cons: attracts attention, not a guaranteed kill, a liability in the wrong hands.

The go-to for Fortnite beginners, the Tactical Shotgun is always a solid pick and especially so in the early game. If you’ve just landed and are sweating profusely, you’ll likely want a Tactical over the Pump so that you get more chances to panic shoot and aim. It does decent damage, though its the least powerful of the four Fortnite shotguns. That’s offset somewhat by its high rate of fire and big shell count before needing to reload.

The only thing holding the Tactical Shotgun back is that it seems to be the most culpable of delivering the dreaded 6 damage. The wide spread of its fire contributes towards this, which may mean that you’ll be left a little aghast when a sure shot is anything but. Still, it’s a solid all-rounder for those without the strongest aim. 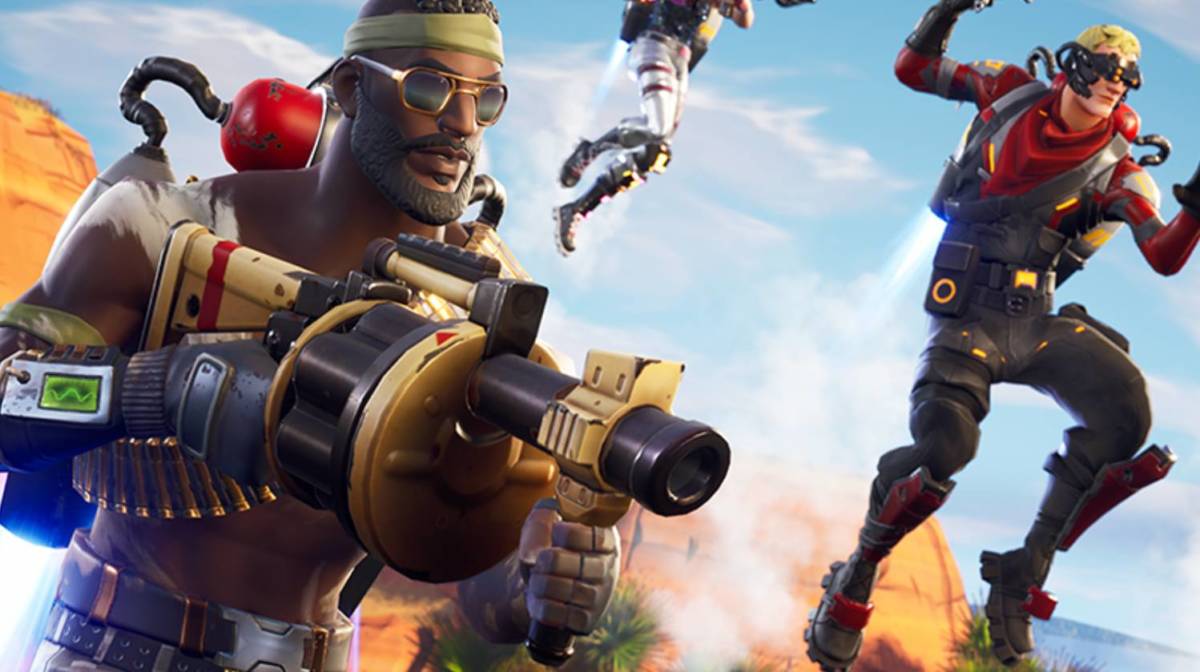 Ranking the Grenade Launcher higher over the Rocket Launcher might be a controversial pick. While it may not do quite as much damage as the tube of death, it allowing you too shoot six grenades before needing to reload is a huge plus. You can positively demolish any structure with the right placement and a bit of luck in the bounce.

However, that’s one thing that holds it back: it will take a little while to understand its trajectories and where you should be shooting it. There’s all the temptation to just absent-mindlessly shoot all of the grenades at once without checking how the trajectory is and with it having limited max ammo, it can leave you high and dry. Still, once you understand the weapon and what situations it’s best in, it’s killer. 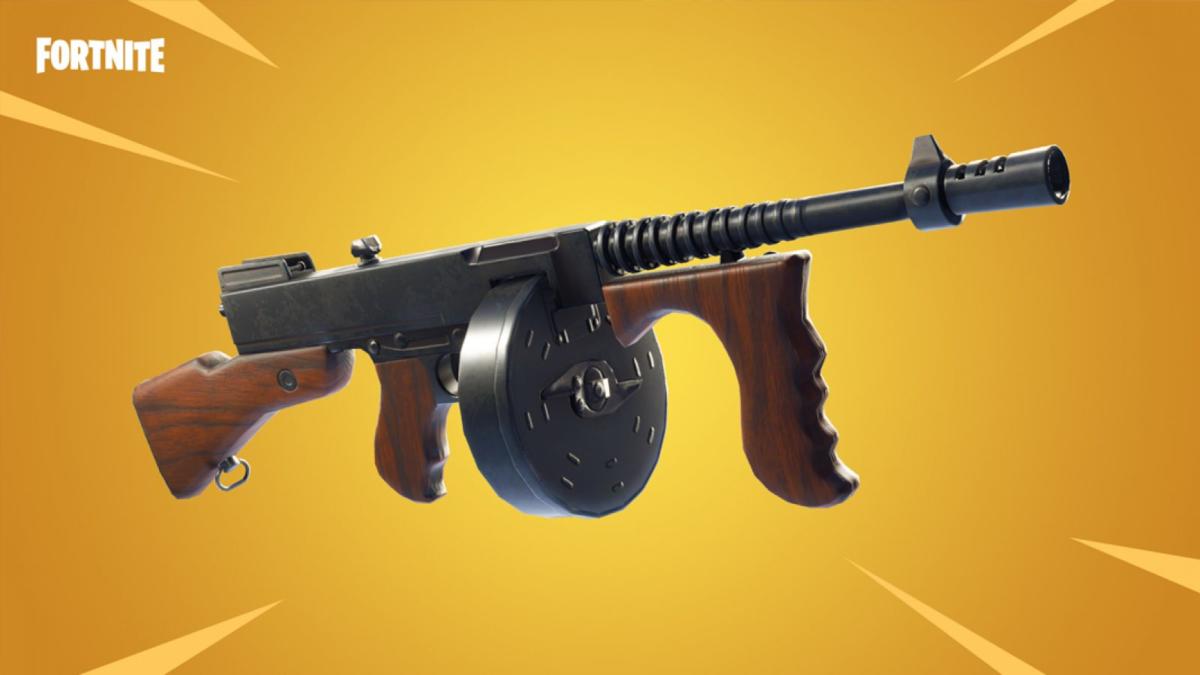 One of Fortnite’s most recent weapons, the Drum Gun has found itself elevated in the meta of late. An SMG/rifle hybrid, the Drum Gun (basically a Tommy) is able to deliver huge damage at mid-close range and isn’t terrible from a little distance, either. It’s also capable of tearing through structures, especially with the formidable size of its clip which can take fifty shots before needing a reload.

However, it’s a risky pickup in the early game as it takes medium bullets: the same ammo used for rifles. Unless you kill a few enemies who have a lot of ammo, you will be scavenging for a while to collect it as ammo crates and chests only have ten at a time. Still, if you use it in combination with a shotgun, you won’t really be needing too many bullets to get the job done. 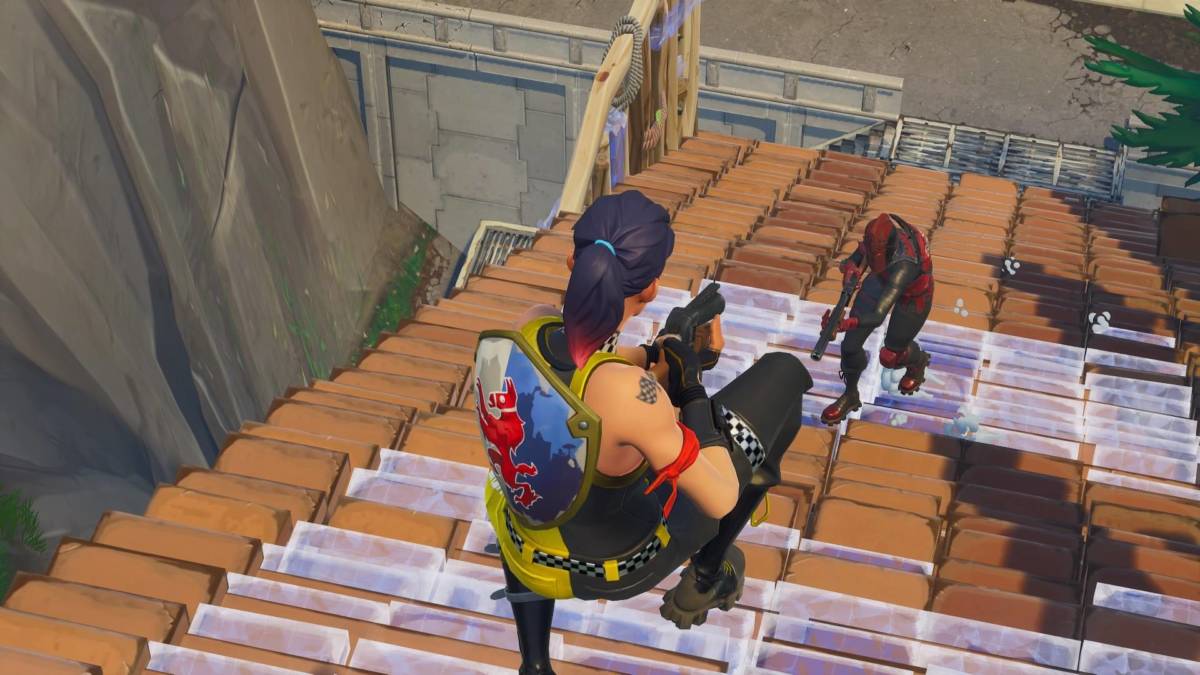 The unofficial mascot of Fortnite has been having a tough time of it of late. As well as being constantly nerfed with the controversial double pump strat being taken out of the game seemingly for good, it’s also had some competition from other weapons to almost replace it, to make it not the only viable weapon for close-quarters. Despite all that, the Pump is still going strong.

Capable of outrageous damage with a headshot, the Pump is currently used in tandem with an SMG in the meta: one quick shot of the Pump before swapping to automatic fire to finish things off. It’s a deadly combination, but the Pump is often enough on its own for those who know how to aim. If you have a Pump Shotgun in Fortnite, you probably have a good chance of winning.

Pros: huge damage, puts the fear of God in enemies.
Cons: slow to fire, likely to get nerfed again. 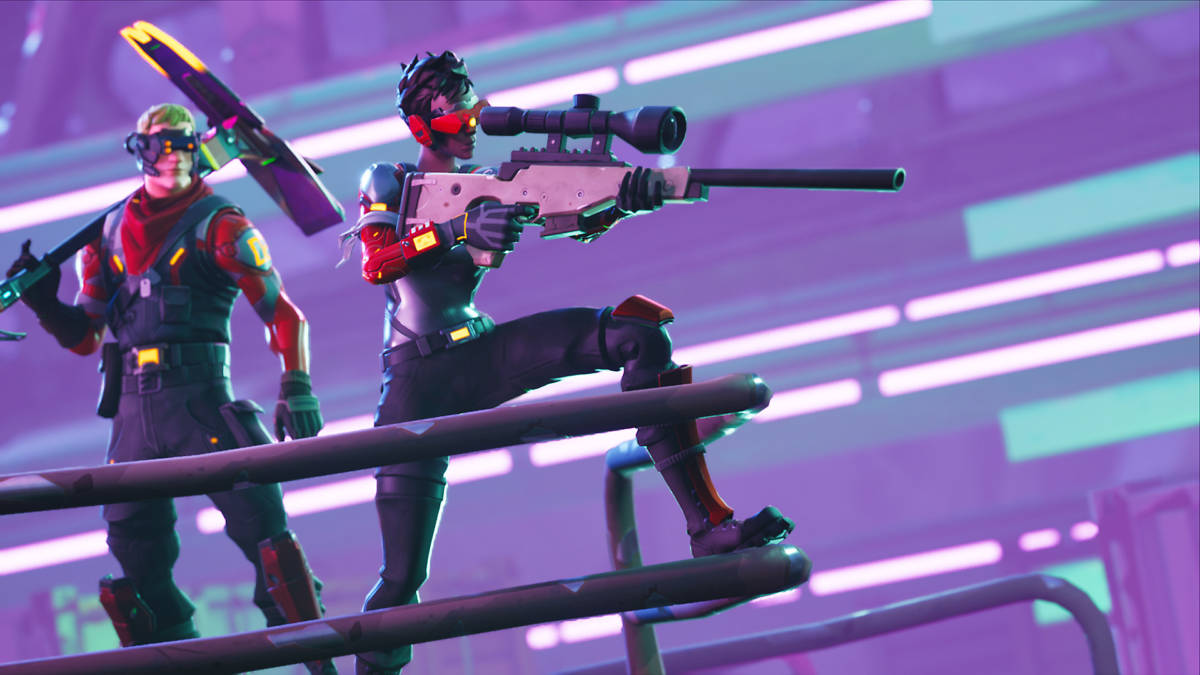 Perhaps controversially the only sniper rifle to make the list for the best Fortnite weapons, the Bolt-Action Sniper Rifle has been around for the longest time as it’s a dependable and rewarding gun to use. It takes a little bit more skill than most weapons and can create some boring situations in the final circle, but that’s just because everyone knows that one shot to the head with it is a death sentence.

That’s a large part of why it gets the nod over the Hunting Rifle and the Semi-Auto. It deals huge damage and has a tiny reload time in its Legendary form, though everything before that rarity is good enough to get the kill all the same. If you ever want to consider yourself a truly decent Fortnite player, you need to be the best sniper you can be — starting with the Bolt is a good way of achieving that.

Pros: one-shot kill, very useful out in the open.
Cons: slow to reload in its lesser variants, requires some skill. 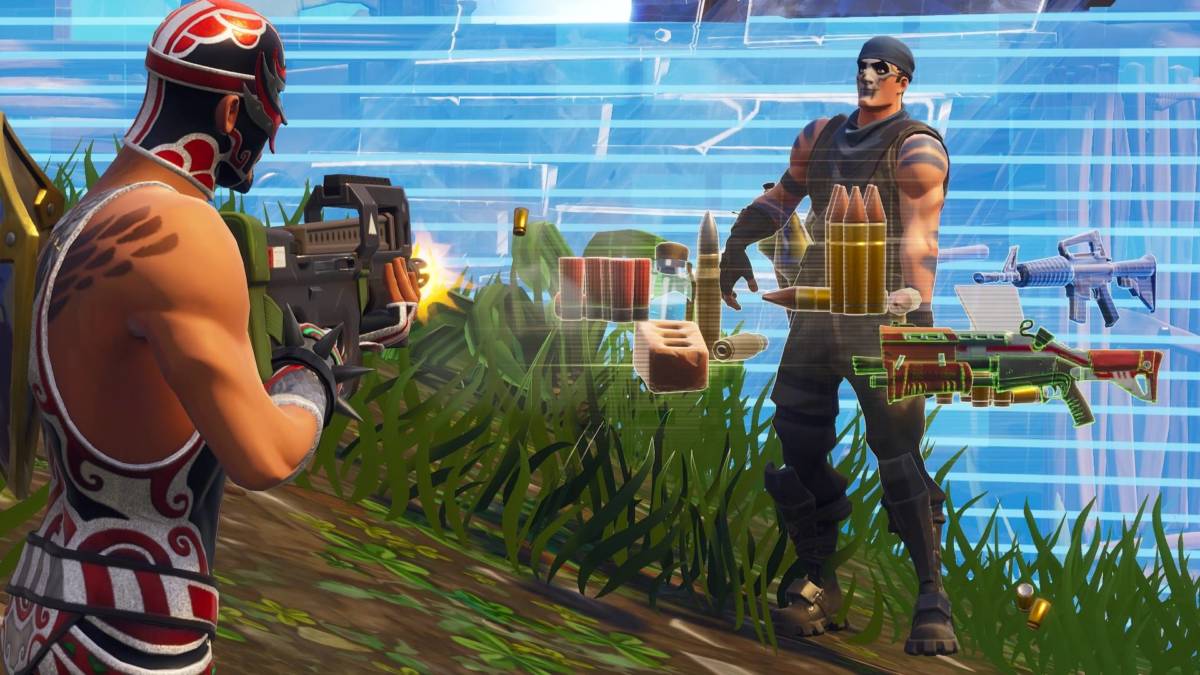 You wouldn’t believe that the Compact SMG has already been considerably nerfed if you use it now. At release, it was a bit of a joke and the most unbalanced weapon introduced to any competitive game. Nowadays it isn’t quite as strong, though it’s still more than capable of causing a lot of mayhem to opponents and structures. People are begging for it to be removed, and it’s easy to see why.

With a ridiculous rate of fire, high damage, and a gigantic clip, it’s a monster at any confrontations in mid-close range; the damage drop-off and spray is a bit too much for it to be ideal for long-range encounters. With it having manageable bloom up close and being arguably the most user-friendly gun in the game (just spray and pray), the Compact SMG should find a home in your inventory whenever possible.

Pros: disgusting rate of fire, huge damage to structures and opponents.
Cons: clips can disappear, takes an age to reload.

A bit of a pointless addition when it was first introduced, the nerf to the Pump has left the door wide open for the Heavy to become the best shotgun in Fortnite. Available in Epic and Legendary rarities, you can shoot seven shells with the Heavy Shotgun before needing to reload it.

Coming across as a good middle-ground between the Pump and Tactical in terms of rate of fire, the Heavy can do decent damage from mid-range, making it ideal if an opponent is trying to run away or are a couple of floors beneath you in your structure. Its high amount of pellets means it’s susceptible to the RNG gods, but you have to be trying really hard to not hit someone with the thing.

The bread and butter of the game, the SCAR is undoubtedly Fortnite’s best weapon and has been almost since the start. By abusing first-shot accuracy and also the gun’s crazy low bloom, you can breeze through a fully shielded opponent from a decent distance without much fuss. It’s also not too bad up close, either, just in case you don’t have an SMG to pair with your shotgun.

The only real downside to the SCAR is that it’s almost like a strange curse to find it early on. Other players will hunt you down to get their hands on it if they hear you firing, as well as medium bullets not being all that common early on. Still, if you can reach the mid-game with a SCAR in your inventory alongside your hopes and dreams, you’re setting yourself up for glory.