The best episodes of the offbeat sci-fi-comedy. 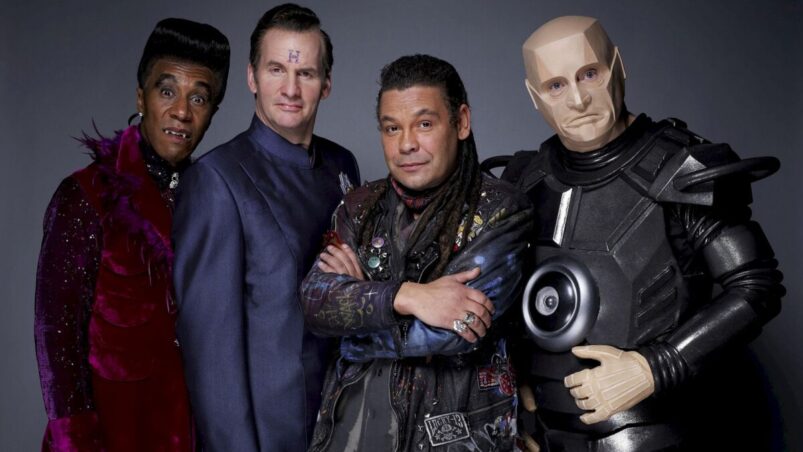 Ever since it debuted on our screens back in 1988, Red Dwarf has remained one of the most popular British sci-fi shows ever to grace our televisions. The sitcom takes place three million years into the far future, and it follows a mismatched group of crewmembers aboard the titular spacecraft, who often find themselves in absurd and hilarious situations as the vessel travels through the furthest reaches of the universe.

This list narrows down twelve of the best episodes to have been released over the decades, so fans and newcomers who are reading this will know which entries they will need to watch if they plan on immersing themselves with the most-acclaimed episodes the show has to offer. 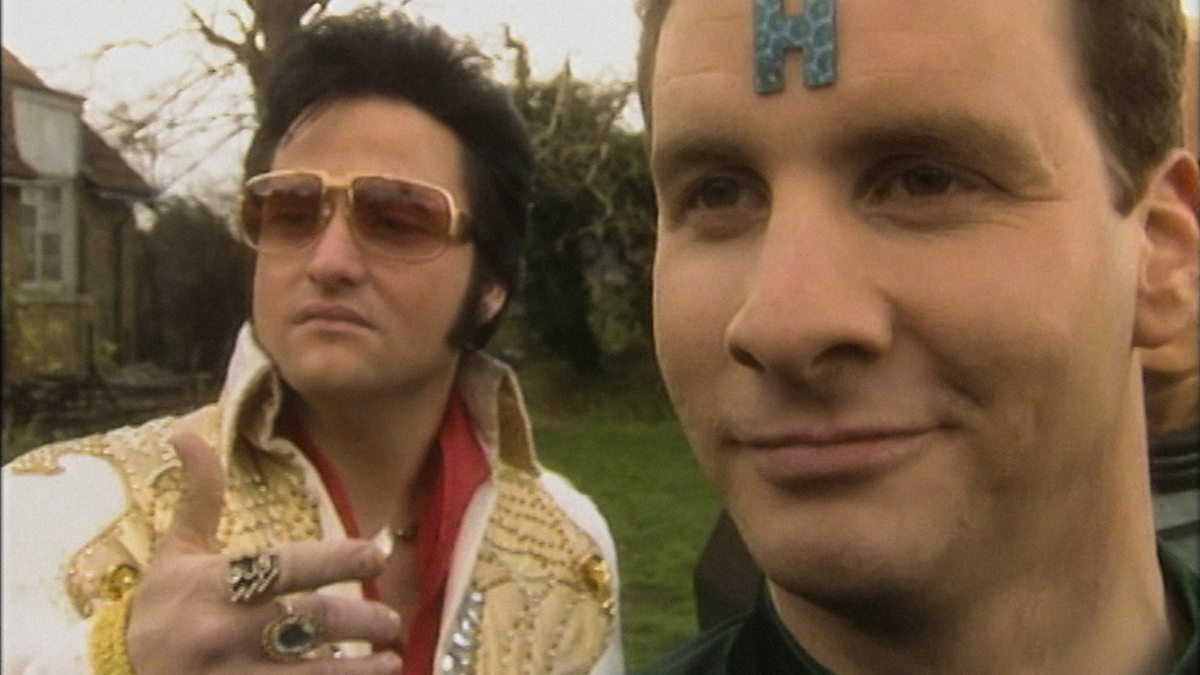 Because of his fascination with leadership and military history, it is satisfying to finally see Rimmer taking control of a squadron of soldiers in Meltdown, a Season 4 episode which found the Dwarfers exploring a planet inhabited by wax droid models of real-life celebrities such as Elvis Presley and Marilyn Monroe. Learning that the droids modelled after popular celebrities are being oppressed by ones based on notorious figures such as Rasputin and Al Capone, Rimmer takes it upon himself to turn the more passive robots such as Gandhi and Mother Teresa, into a squadron of hardened warriors (or as Lister calls them, ‘The Dirty Dozen’, before leading them in a violent uprising against the planet’s oppressive regime.

Regardless of the fact that Rimmer is no doubt an irritating and sometimes dislikable character, he clearly demonstrates real talent and leadership when it came to training and commanding his troops, making us wish he was granted a higher-ranking position in the first place instead of being relegated to second technician. Meltdown shows Rimmer doing what he does best, and viewers were left hungry for more of this side of the formerly obnoxious crewmember.

Kryten is often viewed as one of the most popular characters in Red Dwarf, so the episodes focused on him are some of the best. In this Season 4 entry, the mechanic with the oddly-shaped head falls in love with a female service droid named Camille, who may not be what she seems.

A central theme of this episode is Kryten learning to lie, something which led to a hilarious exchange of dialogue at the start when he referred to a banana as ‘a small off-duty Czechoslovakian traffic warden’, but which took a more serious turn when he lied to Camille to protect her feelings. In addition to showing us a deeper side to Kryten’s personality and proving that robots can indeed experience human emotions such as love and guilt, Backwards is also one of the saddest episodes the show has to offer, making it essential viewing for fans.

Another Kryten-focused episode, Siliconia finds the mechanoid boarding a vessel filled with service droids like himself, who take him in and treat him as one of their own, while Rimmer, lister, and Cat were transformed into mechanoids and forced to endlessly perform chores as punishment for the ‘slave labour’ they inflicted upon Kryten.

This is a particularly fun episode, as Kryten is ultimately forced to choose whether his loyalties really lied with his fellow androids or with his longtime crewmembers, and while not all viewers will agree with the decisions he makes, there is no doubt that Kryten learns more about what it means to be human by the time the end credits roll. 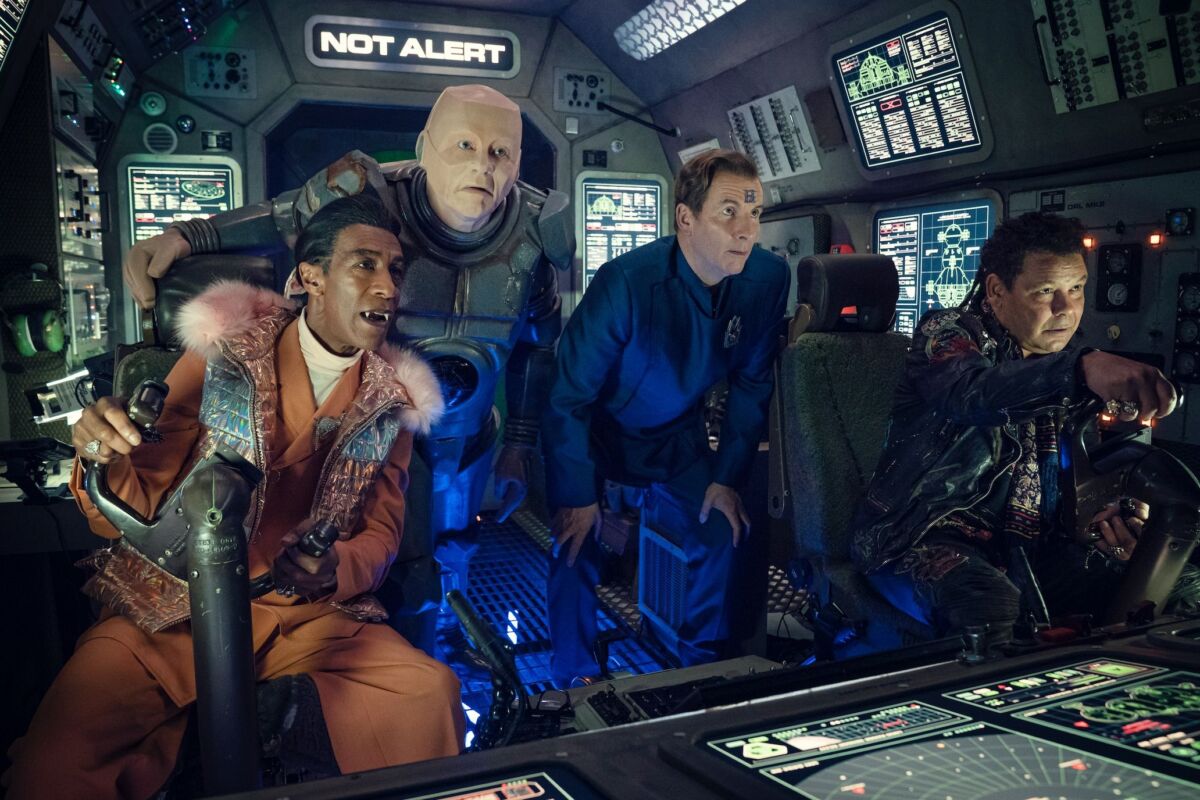 This acclaimed Aeason 10 offering gives fans a closer look at Rimmer’s messed-up childhood via a series of flashbacks, before the adult Rimmer is forced to take charge when a hostile spacecraft attacks Red Dwarf. Once again, Rimmer’s impressive leadership skills are shown in full force, showing that he really could have been a successful military officer in another life.

The Beginning is also findy remembered for introducing Hogey the Roguey, a vengeful droid obsessed with killing the Red Dwarf crewmembers, and his inept attempts to assassinate his enemies will be met with scores of laughter from viewers. Another celebrated sequence shows a villainous character unwillingly disembowelling himself, before trying to push his innards back in place, which may be one of the most edgy and daring visual sequences the show has to offer. The filmmakers really deserve credit for coming up with such a hilariously gruesome scene, and you really won’t see anything like it in any other episodes. This is also one of the few episodes of Red Dwarf to feature a space battle, and that makes it worth watching in itself. 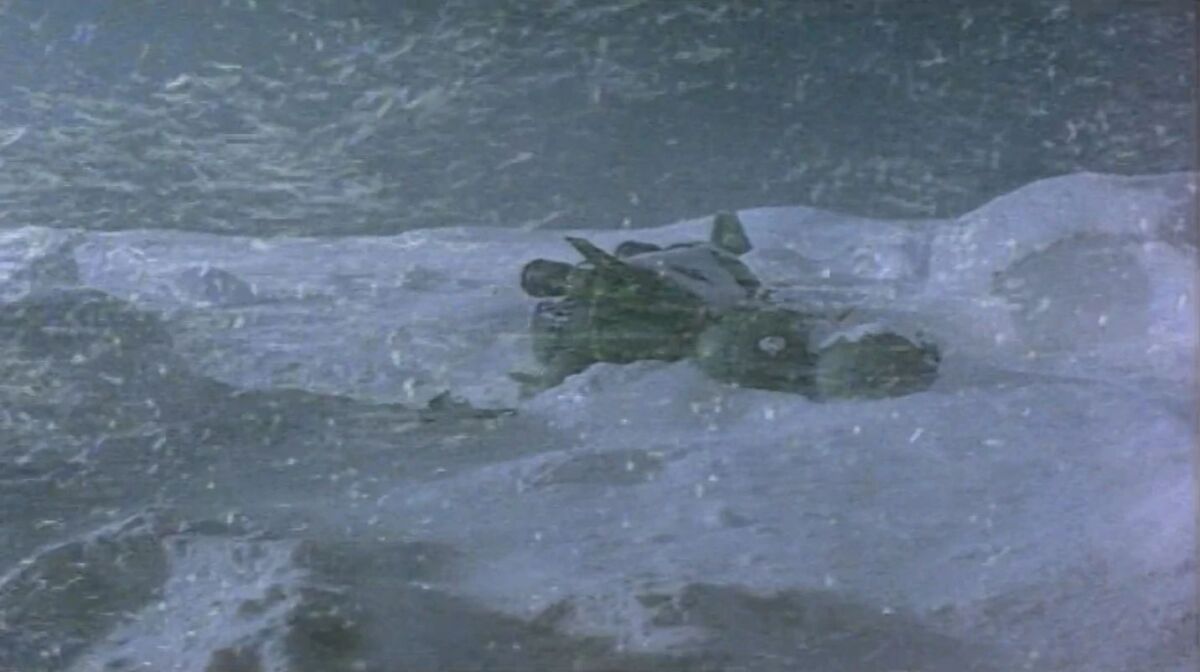 Broadcast in 1989, this episode finds Lister and Rimmer stranded on a remote ice world after Starbug is hit by a meteorite and forced to make an emergency landing.

Marooned is notable for expanding the relationship between Rimmer and Lister, as the two men found themselves exploring awkward topics of conversation while they were trapped in the downed Starbug, with Rimmer trying to distract Lister from the dwindling food and the lack of heating, and Lister being determined to learn how Rimmer lost his virginity. The awkward relationship between the two men is often cited as one of Red Dwarf’s strongest qualities, and this episode reminded us of why we enjoy watching their contrasting personalities so much to begin with. 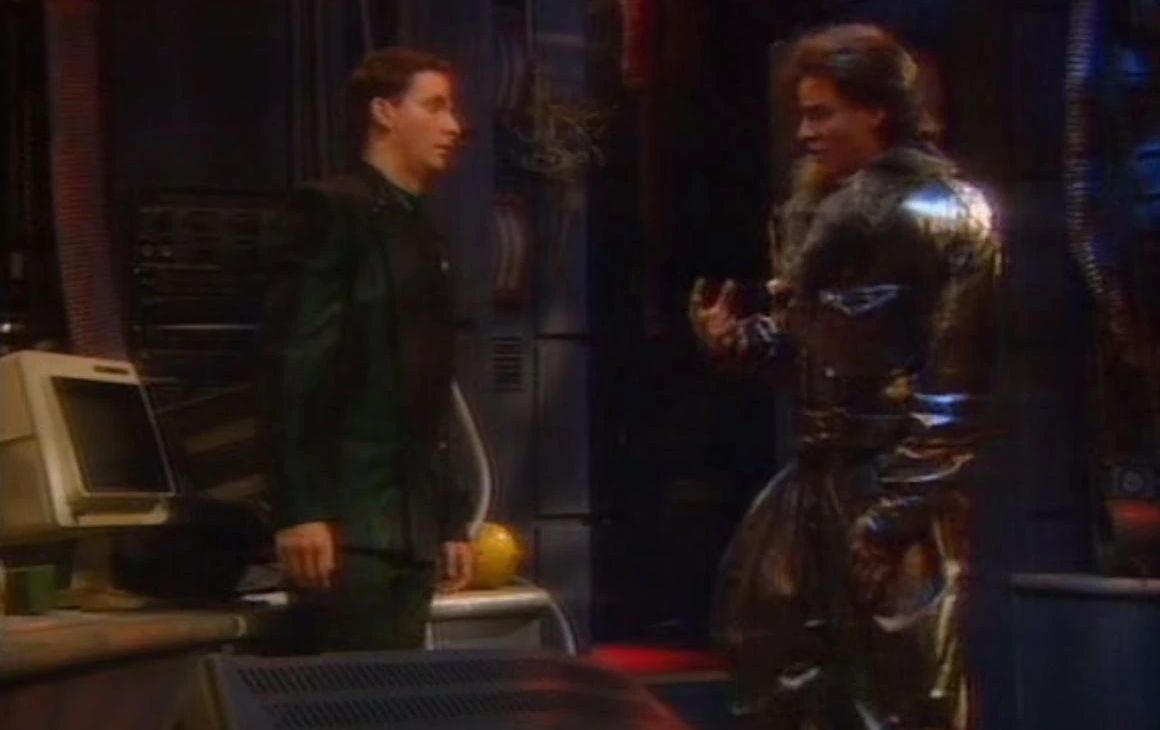 In Dimension Jump, we are introduced to Ace Rimmer, a respected, charismatic, action-hero version of Rimmer from another dimension.

Instead of being awed by his alternate reality counterpart, the regular Rimmer instead becomes bitter and disdainful at seeing what he could have been in another life, resulting in him re-evaluating some of his more questionable life choices before realising that his seemingly perfect doppelgänger also made plenty of his own mistakes throughout his existence. We all wish we could be something else in another life, and the message of Dimension Jump is clearly that we should be proud of who we are instead of denying our true selves, something which hit fans surprisingly hard. 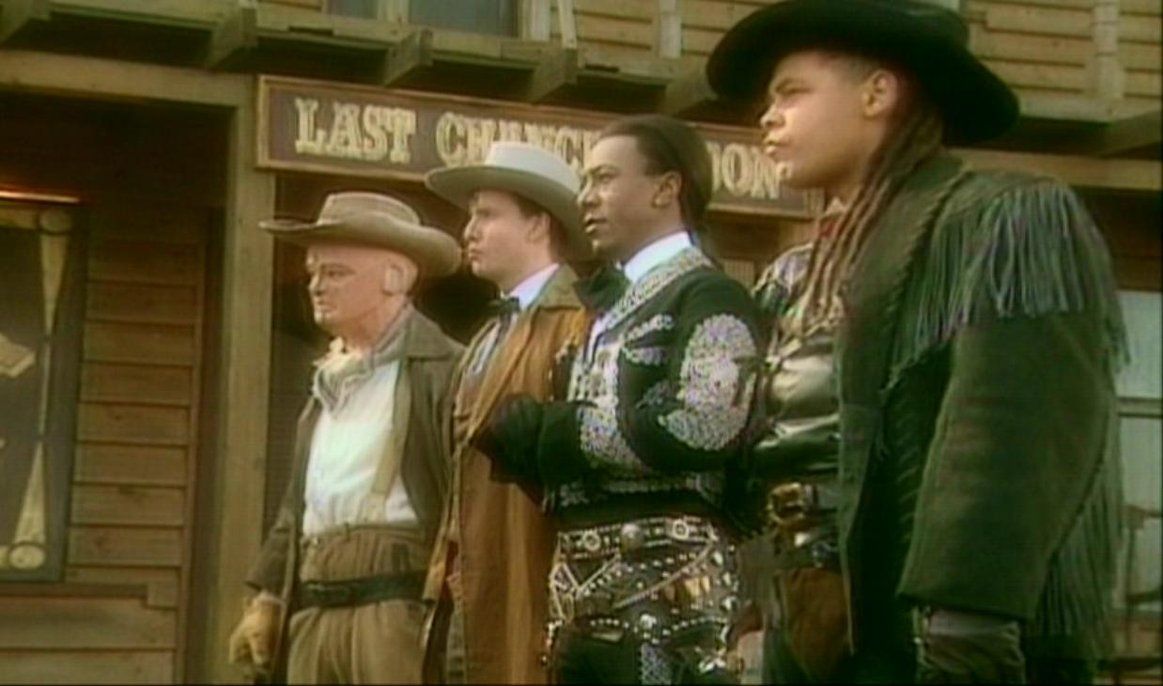 It is always enjoyable to see characters from popular TV shows placed into situations which are far removed from the settings they normally find themselves in, so this Emmy-nominated season 6 entry is particularly memorable as it featured the cast being placed into a Wild West setting after entering a virtual reality game to stop a hostile computer virus from damaging the ship.

Even if you’re not a huge fan of Westerns, you’ll still get a kick out of watching Kryten becoming a hardened cowboy gunslinger.

Red Dwarf creators Rob Grant and Doug Naylor have repeatedly stated that aliens do not exist in the Red Dwarf universe, so all non-human organic lifeforms appearing in the show are classed as GELFS, which stand for genetically engineered lifeform. This episode featured a monstrous GELF known as the Polymorph, which was created for military purposes and which has the ability to feed off negative emotions, causing it to grow and mutate.

As well as giving us one of the best creature designs TV had to offer at the time, the episode is also fondly remembered for showing alternate sides to the main protagonist after the Polygraph stirs the of their negative emotions, with an anger-less Rimmer becoming a peace-loving hippie and Cat becoming a dishevelled, unkempt, and undignified drunk after losing his vanity. This truly is one of the best episodes the show has to offer. 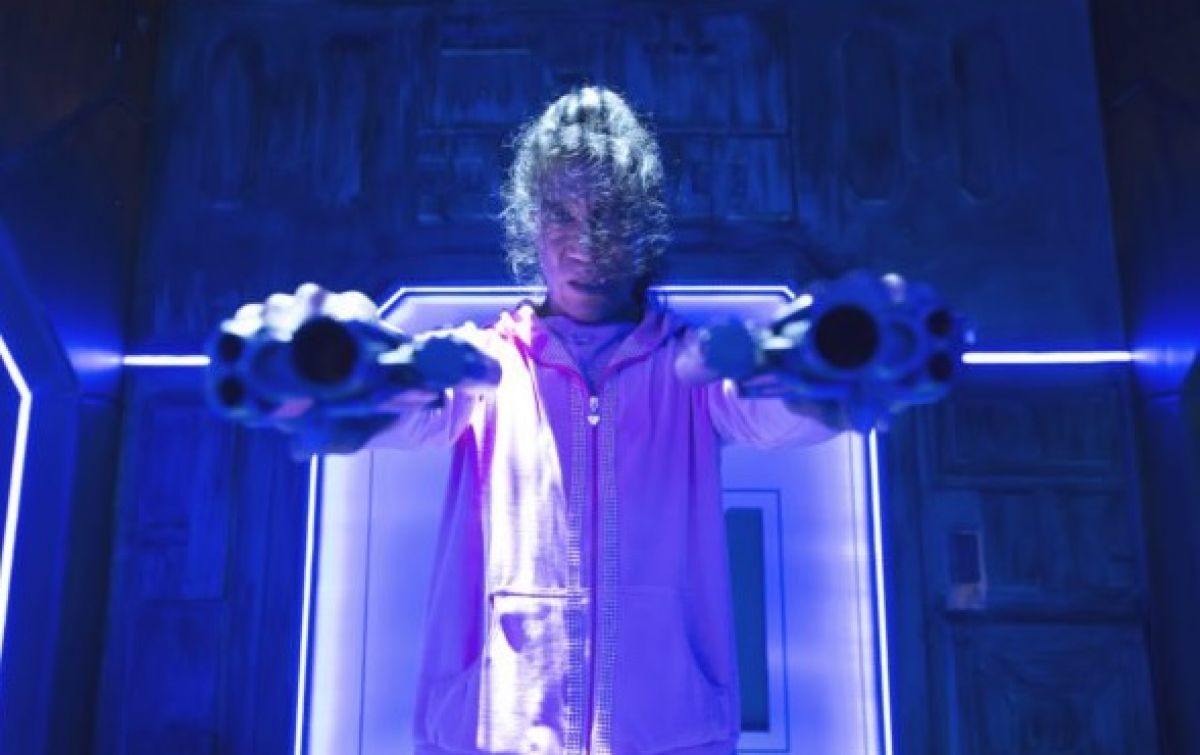 Despite being one of the main characters, Cat is rarely the focus of episodes of Red Dwarf, so Can of Worms really stands out for being one of the few entries to place him front and centre. After falling in love with a female member of his species, he learns she’s actually a Polymorph in disguise – and to make matters worse, he also realises that he is now carrying her eggs.

Fans will be thankful to finally have an episode focused on Cat, and it’s certainly enlightening to see the notoriously vain and self-obsessed narcissist being forced to make ethical decisions which could impact the safety of his friends. Similarly, we are also presented with a deeper look into Cat’s psyche as he is forced to address awkward topics of conversation with his teammates, which again gives us a further look into the mind of a character who we all believed previously only cared about himself. Can of Worms also featured one of the most hilarious action sequences Red Dwarf has to offer, as the crewmembers found themselves engaged in a shootout with duplicate versions of themselves, leading viewers to question who to root for. 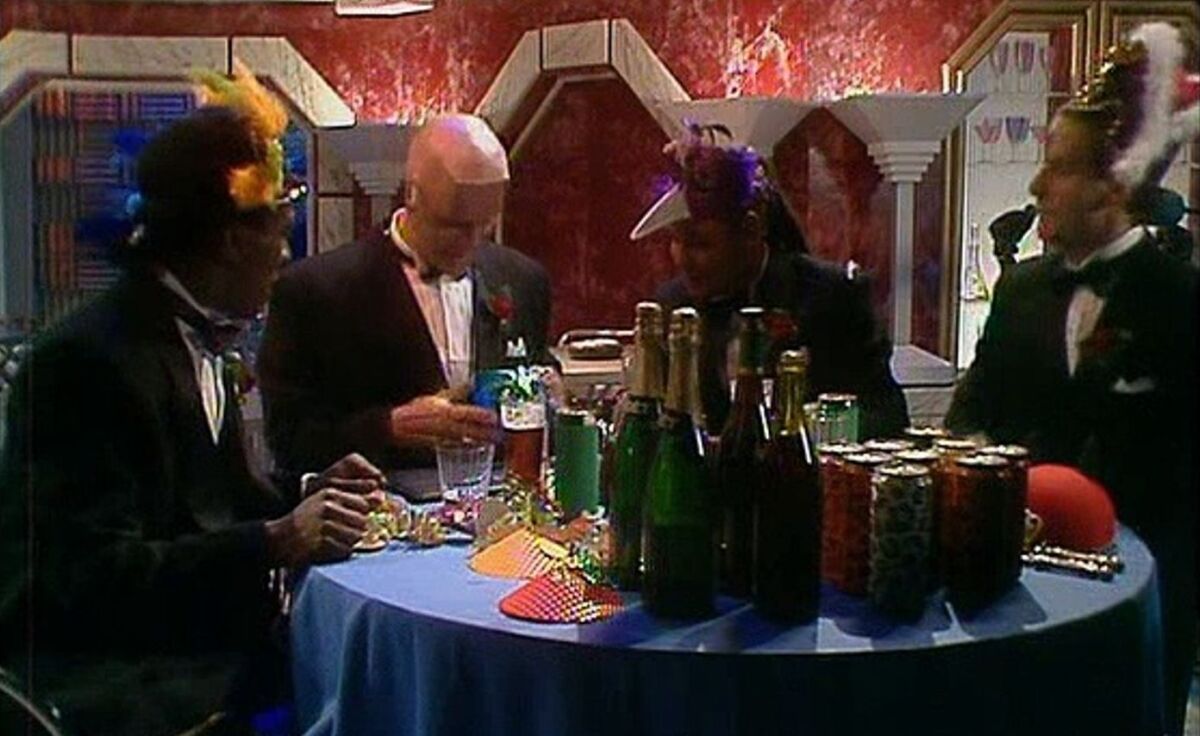 After learning that he only has a day left to live, Kryten starts to prepare for ‘Silicon Heaven’, while the other Dwarfers try to make his final 24 hours as joyful as possible, resulting in the laundry-obsessed droid becoming drunk for the first time in his existence.

This is an exceptionally thoughtful episode, because it addressed the topic of why so many people are desperate for there to be an afterlife, when they should actually enjoy the time they have instead of waiting for an eternity in paradise which will almost certainly never happen. It was unquestionably bold for the creators to tackle the subject of faith in such a direct way, and who can forget Lister’s tragic monologue about how he was abandoned as a child?

This episode is popular among fans because it shows Rimmer’s gradual descent into madness, something we all knew would happen at one point. The scenes with Rimmer wearing a nightgown and speaking to a stuffed penguin named Mr. Flibble will forever be etched into our memories, and may also haunt our nightmares.

It also goes without saying that Chris Barrie really delivered one of his strongest performances throughout the history of the show in this episode, as the pedantic Rimmer slows becomes more and more unhinged as he becomes infected with an aggressive holo-virus.

Widely regarded as one of the best episodes the show has to offer, this season six offering saw the crew finding themselves become trapped in an immersive virtual reality game. The sight of Cat becoming a dorky human named Duane Dibbley is hilarious enough, as is Kryten becoming a no-nonsense traffic officer named Jake Bullet.

As you can probably guess, the characters the regular Dwarfers become in the game represent the polar opposites of their actual personalities, resulting in some hilarious performances from the cast, who clearly had a lot of fun with acting out their new roles. The measures the Dwarfers needed to take in order to escape from the game will also have viewers in stitches, as will the absurd virtual car chase sequence. This is truly one of the most bizarre episodes the show has to offer, and fans adore it for being so unashamedly offbeat.