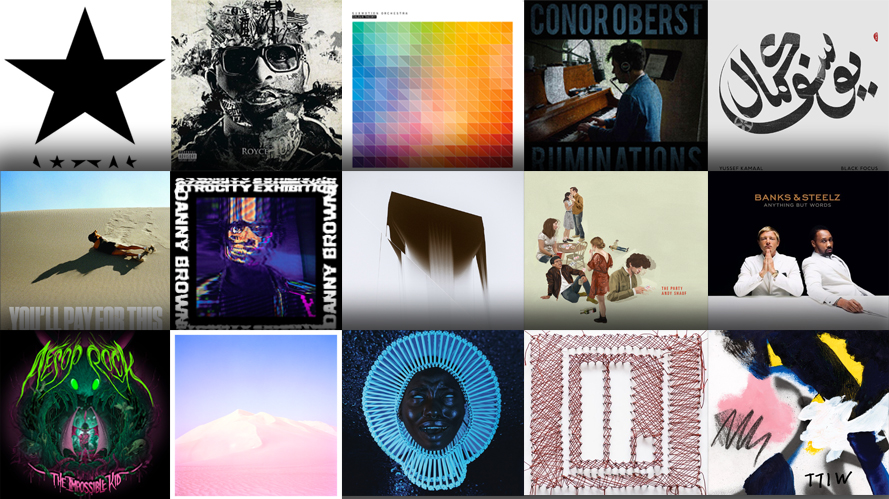 So, we’re peering over the precipice of this debilitating shitshow of a year, ready to leap over into the murky, uncharted waters of 2017. There’s not a lot I can say about 2016 in general terms that won’t just be beating the same old, miserable doldrum, apart from this: 2016 may well be the best year we’ve had this decade for music.

It’s a bold statement, I know, and it’s hard to measure years against each other sometimes, but the sheer scale of the output, across all genres, has been kind of staggering. For this reason, we’ve had to actually narrow it down to a mere 45 albums for the annual highlight reel.

Because this is a collaborative piece, there’s no hierarchy here, you will not find the album of the year at the bottom of this list, so move your finger away from that scroll button, you’ll do yourself no favours. The list is, in fact, chronological, with the hope being that going through it will be an altogether more pleasant way of reliving 2016.

It’s inevitable that Blackstar will be forever considered in its context, over its lyrical content or the music contained within it. Understandable, of course, seeing as Bowie pulled a reverse Jesus and resurrected himself on the Friday (his 69th birthday) with its release, before sadly passing on the Sunday. ‘Where the fuck did Monday go?’ However, unlike other pieces of art released under similar circumstances, that’s not necessarily a bad thing here, because the two are so intrinsically linked. Across his sprawling and otherworldly final opus, exploring jazz, art rock, and the avant-garde, Bowie looks back on his place in music history through self-referential nods, as well as into his immediate, short future; considering death, the afterlife, and life on earth after his death. It is a knowing goodbye, but one handled with such creativity and maturity. Perhaps Bowie’s darkest and most difficult album, but certainly one of his most beautiful too. – Morgan Roberts

All cities have their scenes, but what makes Manchester so interesting is how in tune all the practitioners are with each other. The styles and approaches may differ, but everyone knows what everyone else is doing, and collaborations are constant. Levelz might be the ultimate example, a critical mass of talent comprising of MCs and producers which has risen to enormous acclaim in the past year. LVL 11 is the culmination of all the work they’ve done in the past few years, their opus, and it’s astonishing. Rather than simply being a dose of sheer adrenaline, it rises and falls, playing around with so many styles it’s sometimes hard to keep up. – Callum Davies

Anderson .Paak has been the man of the hour, both in R&B and hip-hop terms for much of the year, appearing on a litany of albums, as well as coming out with not one, but two full releases. While Yes Lawd!, his collaborative effort with Knxledge was a blinder, his solo effort is a straight up masterpiece. The jazzy arrangements, thoughtful lyrics, funky breaks and tight percussion create something which is as soulful as it is explorative, it’s the best single example of Paak’s immense talent we’ve had to date. – Callum Davies

Submotion Orchestra seem to be getting progressively better with each new cut, and Colour Theory is no exception. It almost feels like a few different albums wrapped into one, and nothing they’ve ever done previously has used lead vocalist Ruby Wood more effectively. ‘In Gold’ is far an away one of the strongest tracks in their canon, and it fits perfectly with the consistent rises and falls which the album pulls you through. – Callum Davies

For those more in the know than I, or at least with their ears planted more closely and firmly to the ground, Ocean Wisdom’s debut Chaos 93 has been something eagerly anticipated for a little while now. However, for those like me who got blindsided by Chaos 93 and Wizzy himself, this debut was something of a revelation. One of those rare moments where you hear a fresh new artist for the first time and are just blown away immediately. With a debut clocking in at 17 tracks and a run time of one hour fifteen in these attention deficit days, you’d be forgiven for thinking Ocean Wisdom boasted the confidence of inexperienced exuberance. However, thanks to Dirty Dike’s… well, dirty production skilfully matching brooding atmosphere and bravado ready bangers to Wizzy’s darkly humorous nocturnal tales, you get one of the most attention grabbing hip hop albums of the year, if not just one of the most attention grabbing albums of the year. This is not to mention the insane level of technical ability Wizzy boasts for such a young rapper. His flow is intimidating, and he is one of the most exciting new prospects in rap right now. – Morgan Roberts

6. The Body – No One Deserves Happiness

If someone asked you why 2016 turned out the way it did, you might respond with the abrupt but concise and all encompassing statement, ‘no one deserves happiness’. Of course, you may have misheard the question and thought you’d been asked what the best metal album of 2016 was. Regardless, you’d be right on both counts. ‘No One Deserves Happiness’ is the latest offering from experimental doom mongering duo The Body, and is perhaps their most abrupt but concise and all encompassing statement yet. It’s also in many ways their most melodic and simultaneously boundary pushing. It’s relentless nihilism, but not as we know it. Over the course of ten tracks The Body, alongside regular collaborator Chrissy Wolpert and guest vocalist Maralie Armstrong, ebb and flow between punishing doom, sludge, and post-metal, choral arrangements, melodic chamber pop choruses and vocal acrobatics, abrasive electronic beats, the harshest of black metal screams, essentially a piano ballad, and just fucking noise. It’s disorientating and brilliantly so, and a heavy fucking listen; not just for its noisiest elements but the most melodic and heartbreaking ones that weep and weave throughout the cacophony. – Morgan Roberts

It’s hard to think of any other electronic albums released this year that take you on the kind of turbulent, death defying emotional voyage that Hollowed does. Ital Tek has been a mainstay in the Planet Mu roster for years but here he’s outdone himself. The heavy industrial drums on tracks like ‘Cobra’ are offset by the surprising warmth offered by ‘Murmur’ or ‘Memory Shard’. It’s often said that the best electronic albums sound like a sci-fi soundtrack without the movie, and that’s certainly the case here. – Callum Davies

In a year seemingly served up from the darkest timeline, Open Mike Eagle and Paul White seemed to have teamed up to offer a palette cleanser – in hindsight. Despite being released in March it’s arguably a summer album; coated in smooth soul samples, breezy beats, funky instrumentation, some of the year’s catchiest hooks, and short, snappy compositions. However, throughout the seasons it offered a light relief from the worsening, oncoming storm. Albeit it a light relief riddled with personal and social issues. That’s just how Mike does it, though. Consistently unpacking his own insecurities and neuroses as well as big topics like racial tensions and politics, whilst simultaneously reeling off pop culture references and off the cuff observations. Mike’s can often come across with the brevity and intimacy of a confessional stand up, as much as a rapper. Pair that with White’s detailed but light production and you get a feel good album that’s okay with feeling bad about things sometimes. Kind of comforting right now. – Morgan Roberts

9. Explosions in the Sky – The Wilderness

It would be easy to assume that Explosions in the Sky would never do better than 2003’s The Earth is Not a Cold Dead Place, but with this latest release, their sixth studio album, they’ve at least matched it. The Wilderness is just as emotionally overwhelming as the former album, but it travels on different wavelengths, playing around with more electronic sounds, and it’s far more reserved, the quiet moments are almost more affecting than the louder ones. – Callum Davies

10. The Summer Set – Stories For Monday

We all have our opinions on The Summer Set, but they’re not avoiding that this is their best album to date. From the lead single, self-aware and determined Figure Me Out, through nostalgic love songs about Springsteen, to the obscure optimism of All Downhill From Here, this is solid through and through. It shudders with the powerful realisation of comfort and the ability to speak frankly that comes with that. There are soaring highs, gritty lows, and the beautiful lyricism that comes with making a story out of any moment you see beauty in. At heart, it’s still the alt-pop album it would always be, but it’s bold, it’s confident. – Libby Mayfield

There’s something inherently fascinating about Scandinavian jazz. For decades it’s been quietly developing, unperturbed by the wider world, and gradually more and more people are taking notice. Phronesis are very much on the front line of that, and Parallax might be their strongest piece of work yet. From the moment the drums come in on the opening track, you know you’re in the midst of the kind of talent that recording artists would kill or die to bring into the studio. The level of inventiveness of staggering, and it’ll probably be another few years before any of us really know how deep this album is. – Callum Davies