Figures released by the Office for National Statistics today reveal some very interesting facts about the new and horrible ways that parents in the UK are naming their poor, poor children. The ONS released a series of charts showing clear trends in baby names, often inevitably following the release of films, TV shows and sporting events. Such as; 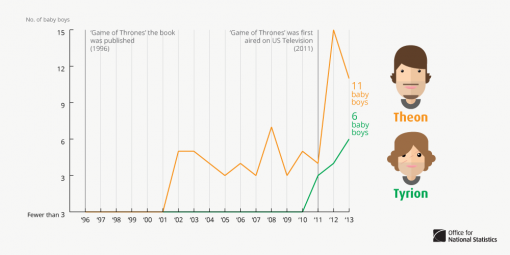 In all fairness, I wouldn’t think twice about calling my kid Tyrion. Theon however…

Making the lives of bullies much easier.

Some are better than others, however 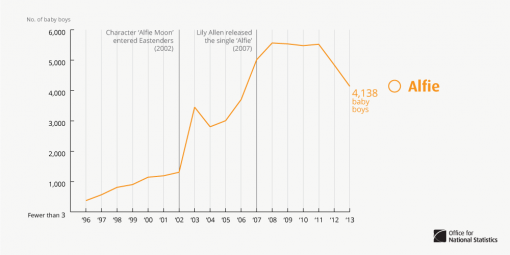 Some names are always popular, but when you consider various pop culture events, the trends can be quite revealing.

Could be worse I suppose.

Fortunately, the new data shows that no child was named “Los Pollos Hermanos”.

Pop Starlets Past and Present

We also found a few of our own

Using this fantastic interactive tool, we searched through the database of all baby names.

Shows a fairly stunning upward trend after the TV series was released. Thankfully the graph below shows that it’s still tiny numbers of kids (probably under 300 nationwide), but it’s still fairly jawdropping.

Surprisingly popular among girls and boys, with a large increase since the TV show started in 2011.

Can you find any interesting and/or horrible names using the interactive? Drop a few names in the comments below and we’ll all chuckle at the horrible lives awaiting their owners.