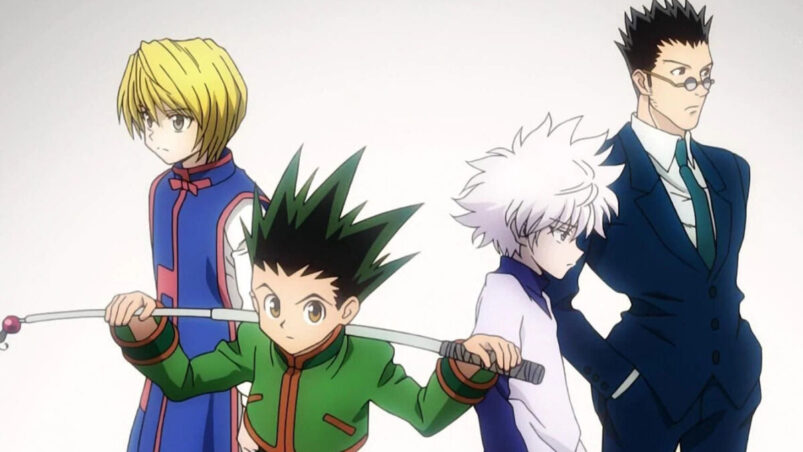 Hunter X Hunter is a rather popular anime that’s arguably one of the best of all time. The series is filled with adventure, action, comedy, and memorable characters. It’s a show that rightfully has a place in the hearts of almost every anime fan around.

The version of Hunter X Hunter from 2011 is actually a reboot of the original series from 1999. The main goal behind rebooting the series was to improve the anime’s animation quality and further increase the success of the show.

Hunter X Hunter follows a young boy named Gon Freecss, who has ambitions of becoming an incredible professional hunter, just like his father. He makes several friends throughout his journey, the most notable of them being Killua. The anime is centered around friendships and shows viewers that, with the right people by your side, some determination, and a lot of hard work, anything is possible.

The series finished airing in 2014, but fans are still hungry for more. Fortunately, there are a ton of anime like Hunter X Hunter that fans can watch to fill the void left behind by the immensely successful shonen anime.

Jojo’s Bizarre Adventure is another anime that’s a reboot of a 90’s era series from 1993. Similar to Hunter X Hunter’s reboot, the show’s creators wanted to improve its animation, although the anime’s style isn’t for everyone.

The unique animation style doesn’t take away from the anime’s story, though. Jojo’s Bizarre Adventure is a lively adventure that follows members of the Joestar family who battle supernatural beings. The members of the family have alliterative names, which end up in them all being referred to as “Jojo”, and they have all fought impressive battles and each have rather interesting backstories.

There are several similar themes between Jojo’s Bizarre Adventures and Hunter X Hunter, including vengeance, death, hope, action, and absolutely diabolical villains. In fact, there are several scenes in each anime that aren’t for those with weak stomachs. Switch over from the power of Nen to the power of Stand and give this epic series a watch.

This post-apocalyptic-style anime from 2019 already has two seasons under its belt, with a third season set to release in 2023. Dr. Stone is a fantastic anime about Senku Ishigami, an incredibly smart teenager who’s trying to navigate a world that’s full of petrified statues that were once living humans.

While Senku’s hairstyle may be extremely impractical, his genius is anything but. Senku uses his intelligence to his advantage in order to try and save the world from its stony fate. Together, he and his best friend, Taiju, use their respective brains and brawns to free humanity.

Hunter X Hunter and Dr. Stone are about characters with hopes to achieve great things in a mysterious and almost unfamiliar world. Dr. Stone has less action than Hunter X Hunter, but the riveting story makes it well worth the watch.

The Seven Deadly Sins is an action-packed anime that will have viewers on the edge of their seats through every battle sequence, much like Hunter X Hunter. The anime is set in a world that’s similar in style to the European Middle Ages.

Princess Elizabeth embarks on a journey to search for the members of a group of legendary knights, known as the Seven Deadly Sins, who were framed for treason. These knights band together and, along with the princess, aim to save the Kingdom of Liones and clear their names.

Like Hunter X Hunter, The Seven Deadly Sins has a cast with several well-written characters who all leave an impression on the viewer. The show’s strategic action scenes and heroic adventures make for a super interesting story that’s sure to please anyone looking for an anime like Hunter X Hunter.

Fans of Hunter X Hunter will absolutely love this superhero anime that’s packed with awesome abilities and action scenes. Similar to the power of Nen, My Hero Academia revolves around unique superpowers referred to as Quirks.

The show’s protagonist, Izuku Midoriya, has a driven and determined nature which mirrors that of Gon Freecss. Izuku has no quirk in a world where the majority of people have one, but this doesn’t stop him from attending UA High School and striving to reach his goal of becoming a hero after he meets the greatest hero of all.

Both Izuku and Gona must train tirelessly to achieve their respective dreams and prove themselves to the world. My Hero Academia and Hunter X Hunter both have several intriguing characters that make the world and story that much more interesting. The anime’s heart-warming relationships and heart-racing battle scenes are sure to win over Hunter X Hunter fans.

Join in the intense political revolution at the center of the plot of Akame Ga Kill!, a phenomenal shonen anime from 2014. This anime like Hunter X Hunter carries a similar sense of adventure, strong and fascinating characters, and thoroughly epic fight scenes.

Viewers will journey along with the Night Raid, a group of assassins determined to bring about a revolution in order to overthrow the corrupt Prime Minister and his government. The show’s protagonist, Tatsumi, is the newest member of the Night Raid. He joins the group while trying to get help for his impoverished village.

Akame Ga Kill! has much darker tones and a harsher plot than Hunter X Hunter, but this doesn’t take away from the similar themes of the show. They’re just done in a more ruthless way. Akame Ga Kill! is a quick binge that will keep viewers hooked the entire time.

If you’re looking for an anime that has a wild storyline, then Katekyo Hitman Reborn! is the anime for you. While the show doesn’t necessarily focus on a glorious adventure like in Hunter X Hunter, it does have a ton of comedy, charm, action, and quirkiness that is sure to win over fans.

The main character is Tsunayoshi Sawada, whose nickname is Tsuna. He’s basically the embodiment of failure with no real ambition until he meets a strange person named Reborn, who is a hitman and a baby. We said the storyline was wild, right?

With the help of Reborn, Tsuna diligently trains to earn his way to the top of the strongest Mafia family in Italy while not only battling enemies but also his own insecurities. The plot may seem bonkers, but Katekyo Hitman Reborn! is a great mix of funny and serious that’s worth the watch.

7. Magi: The Labyrinth of Magic

Magi: The Labyrinth of Magic is a shonen anime that’s sure to stand apart from the rest due to its unique storyline and multilayered characters. The setting of this anime is based on Arabian Knights and is a fantasy world with Dungeons that no one quite understands.

The lead character is a young mage named Aladdin, who resembles Gon. He’s accompanied by his friend Alibaba, which is reminiscent of the friendship between Killua and Gon. Together, the pair sets off to explore the mysterious Dungeons full of riches and powerful Djinn.

While the magic system and battles in Magi: The Labyrinth of Magic are much different than the power of Nen and battles in Hunter X Hunter, the show’s adventure, action, and focus on friendship will keep fans interested.

Nearly everyone has heard of Naruto at one point or another, regardless of whether they’re a fan of anime or not. It’s just that famous. In fact, the series is considered one of the “Big 3” of Shonen anime, and it has a well-written and compelling storyline, which is only made better by fierce action scenes, humor, and lovable characters.

The series is split into two parts, Naruto and Naruto: Shippuden. For those that don’t know, the show is about a young ninja named Naruto Uzumaki, who has the chakra of the Nine-Tailed Fox demon concealed inside him. The people in his village shun him because of this and also because of his prankster personality.

This doesn’t stop Naruto from striving to become the Hokage of his village one day. Both Naruto and Gon experience rigorous training and battles throughout their journeys. There are many similarities between the two anime, including adventure, comedy, overpowered characters, insane battles, and friendship.

Regardless of if you’ve never seen Naruto or have already watched a few episodes, this anime like Hunter X Hunter is a must-watch for any anime fan.

Yu Yu Hakusho is a rather underrated tournament-style anime intrinsically related to Hunter X Hunter. The two anime share more than just similar themes, as they were both created by the same author, Yoshihiro Togashi. Beyond their shared author, they both have amazing characters, engaging action sequences, and dramatic scenery.

The main character is a teenage boy named Urameshi Yusuke who doesn’t care about anything until he sacrifices his life to save a child, after which he finds himself in the spirit realm. Yusuke meets the prince of this realm and is sent back to the real world to be his spirit detective and fight demons who have made their way to the human world.

Similar to Gon, Yusuke must make it through numerous difficult battles while training to prepare for any enemies and threats that await him. If you’re looking to find an anime like Hunter X Hunter, you should give this one a try, especially since they have the same author.

Black Clover has a tremendous medieval fantasy setting and season 5 of the show is set to air in mid-2023. The anime is overflowing with outstanding action sequences and has an imaginative plot strengthened by excellent world-building.

All of Black Clover’s characters are well-developed with their own personalities that will have viewers invested in the entire cast. The focus of the show is on Astra and Yuna, two orphans who grew up together and both have dreams of becoming the Wizard King. While Yuna can manipulate Mana, Astra can’t, which creates a disadvantage for him.

The relationship and friendly rivalry between Astra and Yuna are very similar to the ones between Gon and Killua. The enemies are also similar, as they’re relentless and have odd and interesting goals. Viewers can follow along as Astra and Yuna face battles that push them to the brink of their physical and mental limits while prepping for the release of a brand new season.

READ NEXT: 10 Anime Like Demon Slayer You Should Watch