Animal Crossing is a survival game. 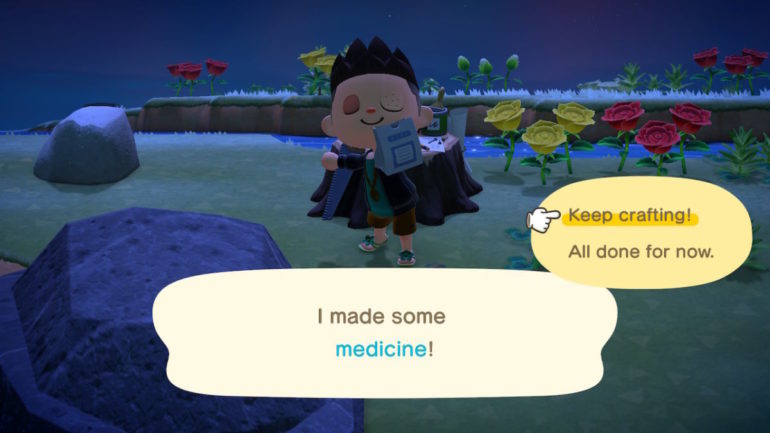 The world of Animal Crossing New Horizons is a very serene one compared to most games. There’s no combat, no failure states, and no chance that it won’t immediately consume your life. The worst thing that can happen to you is either  a tarantula bite that knocks you out, or a wasp sting that gives you a bad eye.

Medicine is what’s used to treat the latter, it being purchasable from Timmy Nook in Resident Services and later in Nook’s Cranny for 400 Bells, which is not really all that much. However, it is possible to save that pocket money and craft medicine instead.

When you get stung by wasps, go and see your neighbors. They will initially react in shock at your sting and not offer much in terms of a helping hand. However, after the third time or so of going up to a neighbor with a bad eye, we were given a DIY Recipe For Medicine.

This recipe allows you to craft medicine with very few resources: one wasp nest and three clumps of weeds.

Luckily, a wasp nest drops on the ground from a tree during a wasp attack, so they’re very easy to find. Also, if you’re travelling to a random island via a Nook Miles Ticket, you’re bound to have tonnes and tonnes of weeds to pick up and use to craft medicine.

While the initial wasp sting is purely cosmetic, getting stung by them for a second time will result in you fainting. While it’s hardly a nuisance as you will wake up either at your house or next to the pilot on another island, it’s good to stay in tip top shape.

Animal Crossing New Horizons is out now for the Nintendo Switch.