Andrew Jackson Jihad Change Their Name Out of Respect for Islam 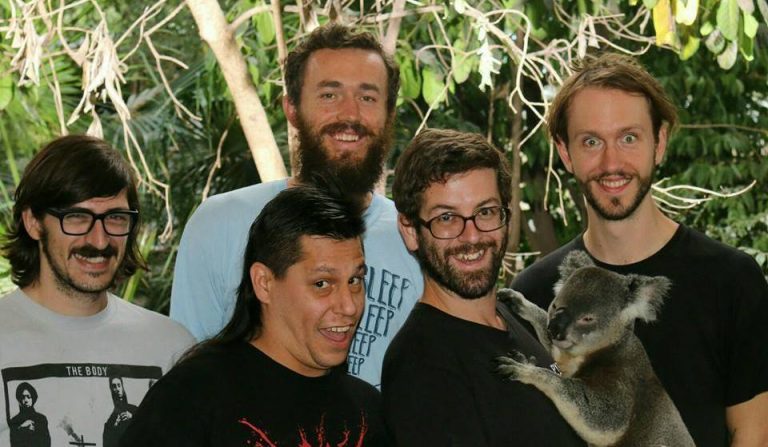 Folk-punk five piece Andrew Jackson Jihad, or the folk-punk five piece formerly known as Andrew Jackson Jihad, have been knocking about now for a strong dozen years. In their time together the band have garnered themselves quite a cult following, on account of their just dab handedness with rustling up a raucous bit of folk-punk with infectious energy and some damn good melody.

Perhaps greater still a reason for the band’s dedicated following is their lyrical themes of social anxiety, existentialism, poverty, politics, religion, and humanity as a whole; subjects that listeners can really get emotionally invested in. Then again, it might be on account of their just being bloody nice blokes all round. Maybe it’s a combination of all of the above, whatever, it’s not important.

The point is they have a dedicated following, a dedicated following who are going to have to get used to their favourite going by a new name. That new name being AJJ. Admittedly, it’s not a drastically different name, given that it’s an abbreviation, and it’s one that many fans have often affectionately (or lazily) already referred to them as anyhow.

The name change in itself, whilst maintaining a sense of familiarity, seems to mainly stem from  the band wanting to distance themselves from a possibly perceived sentiment or otherwise the potential connotations of the name – specifically relating to the use of the Islamic term ‘jihad’. In a statement released by the band, announcing the name change, the band mention that their use of the word has been ‘disrespectful and irresponsible’, and apologise for any offense the band has caused.

It would seem then that the name changes stems from the band’s political consciousness, coming into play with the lyrical familiarity and fixation on the topic of religion. Perhaps the fact their bloody nice blokes too. However, it is unusual that the band are making this change 12 years down the line, mentioning as they do that it has been brought up as an issue to them many times along the way, and it’s for this reason that the decision is likely to have your reactionary sorts up in arms. Because Islam. Because political correctness gone mad.

Whilst I do find the decision to change it now somewhat suspect, or a little odd at least, in all likelihood it’s a just a band who no longer relate to the band they were when they chose it. They may even have become unable to relate to it a whole while back, but only now, 12 years into their career, safe and secure in their fanbase, can they afford to change it and not have it really affect them in anyway. They’re not an up and coming band for whom this may alter their development or interfere with their momentum.

Anyway, what do you think? Should they have changed their name? Is it even a change? Is it too little too late? Is it bowing to pressure? Why now? Freedom of speech? Won’t someone think of the children? Here’s the band’s statement in full;

We are officially changing our name from Andrew Jackson Jihad to the simple, familiar abbreviation that most of you already call us: AJJ.

The two biggest reasons for this are:
1.) We are not Muslims, and as such, it is disrespectful and irresponsible for us to use the word jihad in our band’s name.
2.) We no longer wish to be a living reminder of president Andrew Jackson. Interesting historical figure as he was, he was an odious person and our fascination with him has grown stale.

We are very sorry to any people the name has offended. We would like to thank those who have reached out over the years to let us know that the name is problematic, especially those who reached out with kindness. Had we known in 2004 that we would still be making music together 12 years later, we most certainly would have chosen a more thoughtful name from the start.

The name AJJ fits us better than Andrew Jackson Jihad. It has been our nickname for those in the know forever. It hearkens back to the great skatepunk bands like JFA, FYP, LFO, etc… It also retains, even amplifies the quality that I liked about the name Andrew Jackson Jihad; that it can be interpreted in different ways. Now that we are AJJ we can be “Arizona Juvenile Justice”, “Anonymous Junk Jugglers,” “Actress January Jones” (Chris Farren thought of that one) the possibilities are endless and we’re very excited to see what you all come up with.

Now that we are officially and proudly AJJ, we would like to share our new song “Now That I’m at the Top of my Game.” We recorded it in Dallas with John Congleton while making our forthcoming album. This song seemed confident enough to stand on it’s own.

The video was made by Karin Graham, Mark Glick, Mark Roebuck and Sean out of some stock footage of body builders and Sean’s crooked teeth.

Thank you all so much for reading, for listening, and for being so good to us for all these years,

we love you all,

Oh, and they released a new video to soften the blow for y’all, in case you didn’t take the change too well. What did I say? Bloody nice blokes.