The Legend Of Korra was definitely on par with Avatar: The Last Airbender - but this villain was a cut above. 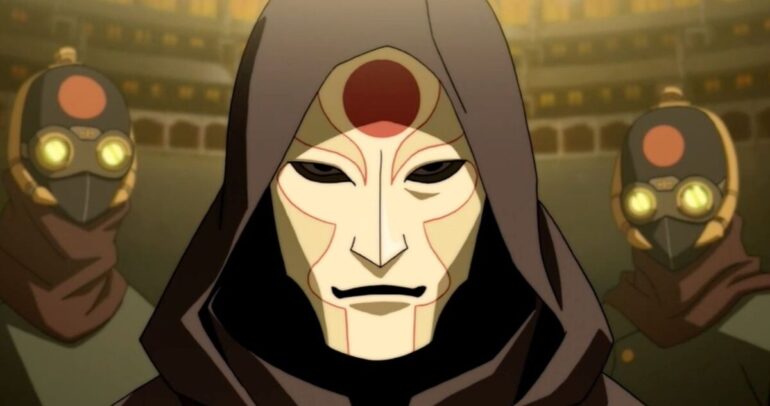 Spoiler warning for the ending of Legend Of Korra: Season 1.

With The Legend Of Korra now on Netflix, fans old and new can dive into the sequel to Nickelodeon’s cultural juggernaut Avatar: The Last Airbender. Jumping in, viewers will find a sequel that was willing to grow up along with its audience, and fire time’s arrow far into the future, presenting a world of equal parts fantasy and modernity. For its return to the air, and what was originally supposed to be its only season, The Legend Of Korra’s creative team crafted Amon, a central antagonist that signified a level of depth and subtlety it would strive to match in subsequent seasons. From his ideology, to his charming performance by veteran voice actor Steve Blum, to his function in the story as a conceptual threat as well as a physical one, Amon represents a high watermark for the Avatar franchise’s antagonists.

For the uninitiated, or for those who don’t quite remember the details of an eight-year-old show, Amon is the mysterious, masked leader of a movement called The Equalists, an agreeable-sounding name for a group that opposes the societal inequality between benders, people in the show’s universe who have superhuman control over the elements of fire, water, earth, or air, and nonbenders, aka regular people like you or me. It’s a question that the original show never gave much attention to: In a society where a significant part of the population is born with the uncanny power to blow things up or cause earthquakes, how do the people who can’t do that live?

Amon’s supporters, and Amon himself in his rhetoric, say that the benders are complicit in their privilege and enjoy looking down on human beings who didn’t have the luxury of being born an elemental wizard. To paraphrase George Orwell: in the world of Avatar all people are equal, but some people are more equal than others, because they can shoot fire out of their palms.

Amon’s stated goal, on the surface, isn’t too much to ask: just treat nonbending people like equals. That’s not too much to ask, right? Unfortunately, this cause leads Amon to deploy armed troops through the streets, publicly torturing benders, and building instruments of war in the pursuit of his ideas of “equality,” which looks more like a direct inversion of privilege than any actual kind of equitable legislation.

Amon doesn’t want peace, or restorative justice, but instead retribution and punitive justice. This line of thought and action is widely considered by scholars as “tyrannical” and “a jerk move.” If this ideology sounds complex, thorny, and maybe similar to how people in power tend to view revolution in our own world, then congratulations, you’ve been paying at least a little bit of attention. Even so, as brutal as his means are, Amon’s central idea — that benders should not be allowed to run roughshod over nonbonding people — is a sound one, and something the show does its best not to dismiss outright. 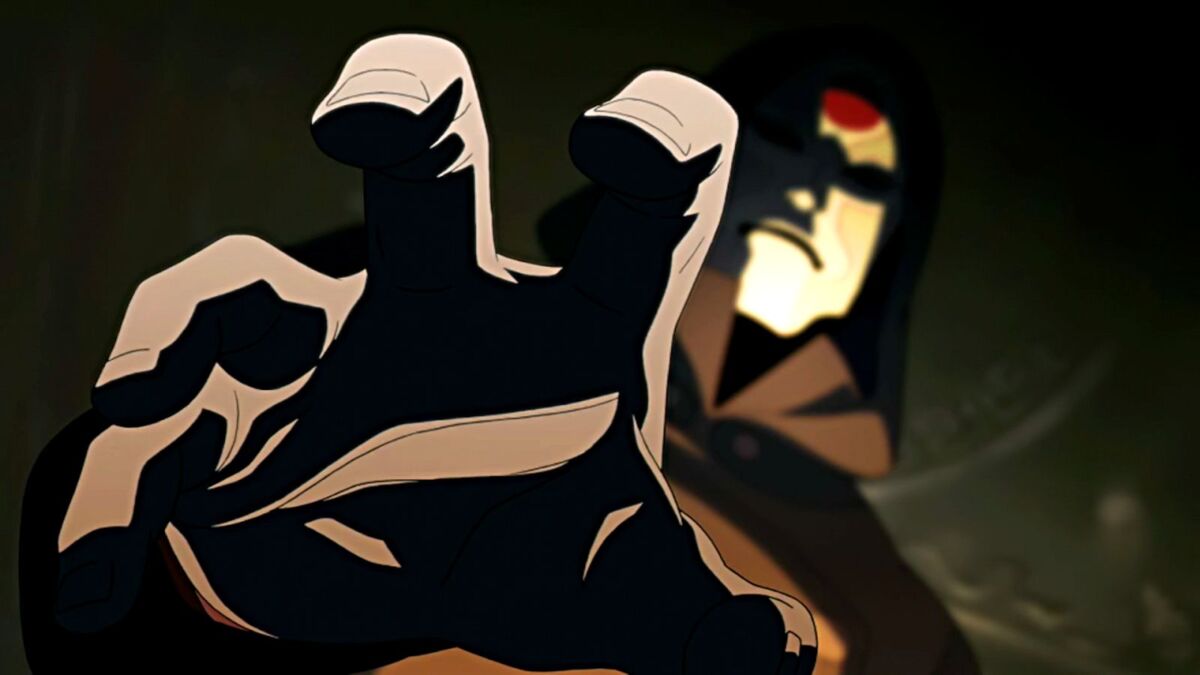 Amon’s personality and mannerisms are considerably more cerebral and subdued than other villains in the Avatar world. Let’s look at the villains of Avatar: The Last Airbender (and for the purpose of this article the definition of villain doesn’t include Zuko and one of the best face turns in recent pop culture). They were openly fascist warmongers like Zhao and Firelord Ozai, one-note in their mustache-twirling schemes like Long Feng, or deeply sadistic and increasingly unstable like Azula, who is in many ways the exact opposite of Amon, with an emotionally grounded arc of villainy playing off her egregious ideology of might makes right.

Before his followers militarize, Amon presents himself as a champion of the people, a Populist leader giving voice to voiceless. He peppers his speeches with poetic flourishes but keeps an underlying humility, seeming to say, “I’m just like you, my fellow non-benders, just with a little more public speaking experience.” The image he presents is cultivated and precise: the image of a man of the people.

In addressing his enemies, Amon displays a certain level of respect, giving his enemies the apparent opportunity to defend themselves before he defeats them and performs his coup de grace that takes away a person’s bending. While we later discover Amon has the power to bloodbend – that is to say, control another person’s body and therefore never lets anyone have a fair fight against him – he does still believe in preserving the image of giving them one. He’s polite and courteous, and even tells his subordinates to never underestimate Avatar Korra when they believe they have her captured. For all of Amon’s flaws, he is not arrogant. He respects his enemies too much to succumb to the kind of ego trips we saw in The Last Airbender’s villains.

The tone and tenor of Amon’s voice walks this line of humility and authority, dulcet tones that make a follower feel heard, but also led. In a stroke of brilliance, the people behind Korra cast veteran voice actor Steve Blum to embody Amon and his polite, reverent menace. Blum’s resume is staggering, and digging into all of his signature roles in western animation and anime dubs would require more space than we have, but for a few prime examples, he’s voiced multiple animated versions of Marvel’s resident curmudgeon Wolverine, Starscream from Transformers, Zeb Orrelios in Star Wars Rebels, and perhaps most famously the aloof, detached bounty hunter Spike Spiegel from Cowboy Bebop. In Amon, Blum creates a very unique vocal profile, curdling the distant warmth he used to great effect in Bebop, giving Amon a sense of someone recognizable, but unknowable. In moments of both triumph and challenge, Blum basically purrs behind Amon’s mask, hinting that, for all his talk of equality, this is someone always hungry for a fight, and if not hungry, then at least a little peckish.

Between his vocal style and his status as ideological as well as physical threat, Amon’s calculations about his presentation also manifest in his physical form. Ito put it very simply, everything about Amon’s character design is cool. Whereas every other major character with bending abilities wears bright colors associated with their element, Amon is in gray and black. He’s sleek. His image is captivating. Hooded and in baggy outfit with an unmistakable silhouette of both a military uniform and factory jumpsuit, Amon cuts a figure that appears humble and working class, again presenting an image of a man of the people, fighting on the front lines and laboring in the factories of this newly-industrialized world. Under his hood, he wears a mask, resembling the Kabuki masks of Japanese theatre (because in reality, it’s all a performance), its mouth frozen in a tight-lipped Mona Lisa smile. The mask design furthers the air of mystery and abject nature to the character of Amon, because Amon is a “character” in the world of the show as much as he is for us, as he’s a constructed personality meant to inspire people to the Equalist cause.

The final artistic touch is the huge red circle on the mask’s forehead. One possible meaning of this red dot is to contrast with the head of Avatar Aang, the hero of bending people. Where Aang and his airbending descendants have blue arrows on their foreheads, signifying motion and flow, Amon has a red circle. A period. As if to say: the movement, the motion, the path of energy, it all stops here. The role of Amon as a symbol is so crucial to the show that during their full scale attack, the Equalists lower a massive Amon mask onto the face of a statue of Aang to signify their victory.

Amon is so dedicated to maintaining his power as a symbol that he’s even willing to put a mask under his mask. 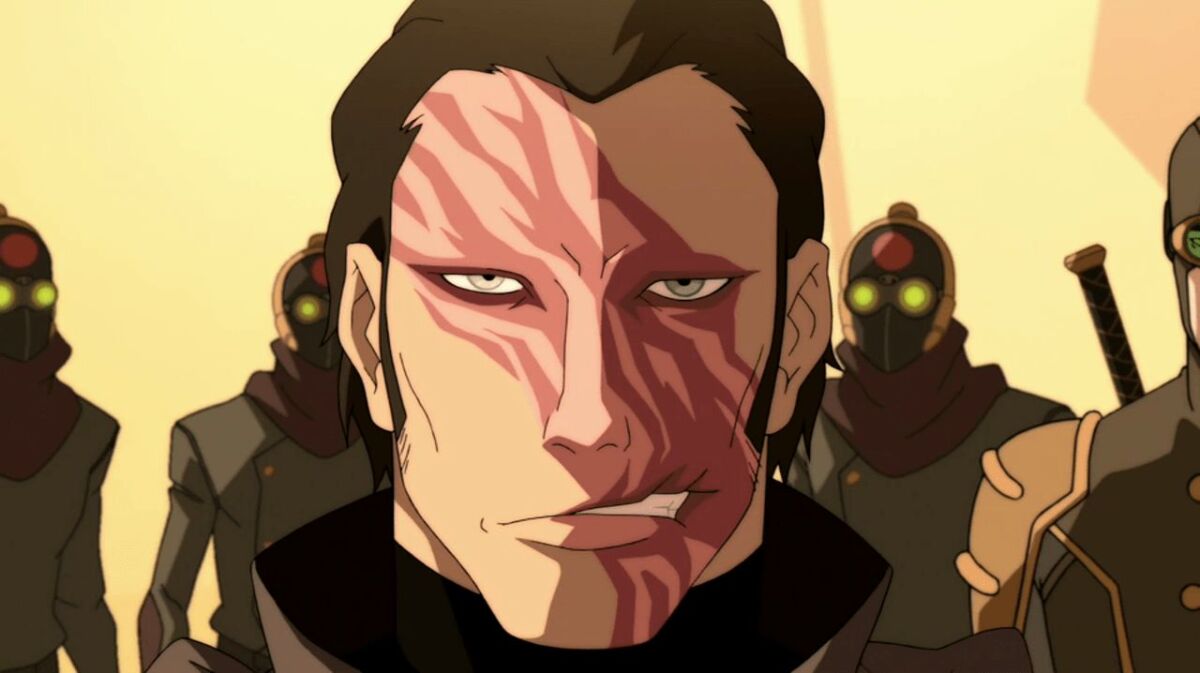 In order to maintain his fabricated cover story of being brutally mauled by a firebender, Amon paints on a vivid facial scar under his mask, which he defiantly reveals in a climactic moment and plays as an act of vulnerability. Such a backstory is especially significant when we consider the truth about Amon’s identity: That his real name is Noatak (a slanted portmanteau of ‘No Attack’ — his blood bending means no one can attack him), and he’s the son of a famous water bending criminal who trained Noatak and his brother Tarrlok to be remorseless bending super-weapons.

As a waterbender, Noatak comes from the same bending lineage as Avatar Korra, connecting the two in a way that neither would be proud of. By painting over his face and hiding behind his mask, Amon distances himself from his past entirely, whereas the Avatar is a constantly renewing cycle. His own element, water, is what ultimately reveals him though, washing away the face paint and revealing Amon for the person he tried so hard to leave behind, or at least only indulge in a way that suited him.

In discussing what’s so special about Amon, we also need to examine how his story ends, which is a doozy, because how many children’s shows end their first season with villains being a part of a murder-suicide? It’s not exactly the sort of thing you’d see on Foster’s Home For Imaginary Friends. Amon and his aforementioned brother, trying to flee after Amon is exposed, share a brief reunion on a speedboat before Tarrlok aims a weapon at the boat’s gas tank and blows them both up. What’s more, since Amon was a bloodbender, able to sense and manipulate other people’s bodies with extreme finesse, it’s likely that he knew what his brother was doing and chose not to stop him. For a man who wanted to stop the cycle of benders using their powers for violence, but had to indulge his own violent abilities to do so, Amon ultimately lets himself be stopped, ending the cycle definitively, if not peacefully. A nuanced, complex ending for a nuanced, complex character at the end of a dense, challenging season of animated television.

Ultimately, Amon represents a masterclass on creating compelling antagonists and advancing the sophistication of storytelling for The Legend Of Korra. The creators of Avatar allowed their stories to evolve along with their world’s technology, and present an enemy that is understandable, even as he is not forgivable. Between his backstory, his belief system, his sense of style, and that voice, Amon’s animal magnetism cannot be denied – nor can his place in Avatar’s history books, and in our hearts.