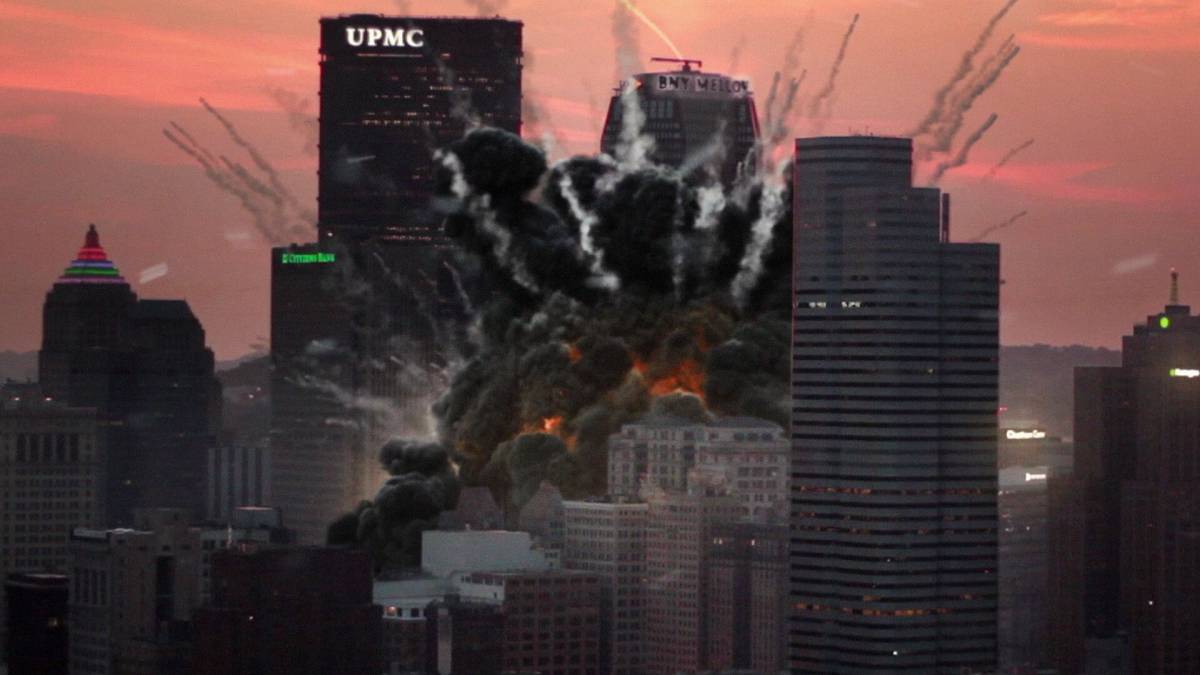 Yeah, so, the first thing you should know about America has Fallen (and this should tell you everything you need to know about the movie) is that there’s a high-speed chase in which a CGI attack helicopter shoots missiles at an SUV carrying the president of the United States through some near-empty Pittsburgh streets.

Over-the-top, low-budget, silly, but made with an oddly charming sincerity by writer/director/ producer/editor/star Tom Getty, America has Fallen isn’t boring, but it’s pretty bad. Whether it’s a so-bad-it’s-good kind of deal will depend on the individual viewer’s taste. Usually, I prefer my microbudget insanity to come in the form of weirdo horror, so I didn’t get a lot out of this one, but your mileage may vary.

The film is a throwback to the kind of right-wing patriotic fervor that was a hallmark of so many action movies in the 80’s and early 90’s. America has Fallen is updated, of course, with elements from the War on Terror, and Osama bin Laden even makes an appearance or two. This is the kind of stuff where the bad guys and the good guys are clearly delineated. There’s no moral ambiguity. This is one of the reasons people loved their action movies in the 80’s, and I certainly did when I was a kid. Commies bad. U.S.A. good. G.I. Joe and Cobra. That kind of thing. Well, on that score, at least, nothing much seems to have changed for some people.

Though it’s absurd, the plot moves forward at a nice pace. I mean, you probably won’t be bored with the thing, at least. Getty plays Ryan Taylor, a supposedly smart special ops guy who’s easily taken in by an attractive woman on his bus ride home who flirts with him quite heavily and then gives him her phone number. Turns out when he calls the number, which he seems to do as soon as he gets home (impatient!), it sets off a car bomb which blows up a high-rise, killing 70 people.

Taylor’s apprehended by the FBI, goes action hero, escapes, somehow gets involved in rescuing the president, who has been kidnapped and is now attached to a briefcase nuclear bomb. Eventually an attack helicopter that shoots missiles throughout downtown Pittsburgh is thrown in. Then there’s a weird conspiracy angle involving the CIA, and a bunch of bad dudes get their asses kicked. And, naturally, the main villain is a complete ripoff of Tom Hardy’s Bane, at least with the mask and the vocal distortion and such. So there’s that.

Also, AN ATTACK HELICOPTER SHOOTS MISSILES AT AN SUV IN THE MIDDLE OF THE DAY IN DOWNTOWN PITTSBURGH. There are lots of questions here. Also, what the hell?

Man, though, it takes some serious guts to attempt an action-thriller with a budget of $6,000 (according to IMDB). Most people would try something a bit smaller with that kind of money, but no, not Tom Getty. The man had a vision and, goddamn, he went for it. And he puts in a sincere effort. Of course, as you might imagine, the budget causes a problem or two. Like when the president is visiting the bomb site and it’s supposed to be a big media event, but there are clearly ten to twenty people max watching the president give his speech and not enough secret service agents to prevent the guy from being kidnapped. Well.

There’s a real homemade feel to America has Fallen, as you might imagine. Ultimately, it’s going to appeal to two distinct groups: hardcore action junkies and fans of bad movies. I generally consider myself one of the latter, but I just don’t know if I can give this movie my so-bad-it’s-good seal of approval, though I can’t say I didn’t have fun, despite an abundance of head-scratching moments. This might be worth dropping a few bucks on if you’re in the right mood.

America has Fallen was released, appropriately enough, to VOD platforms on July 4th.