Night School Studio can toast to creating a funny and endearing tale. 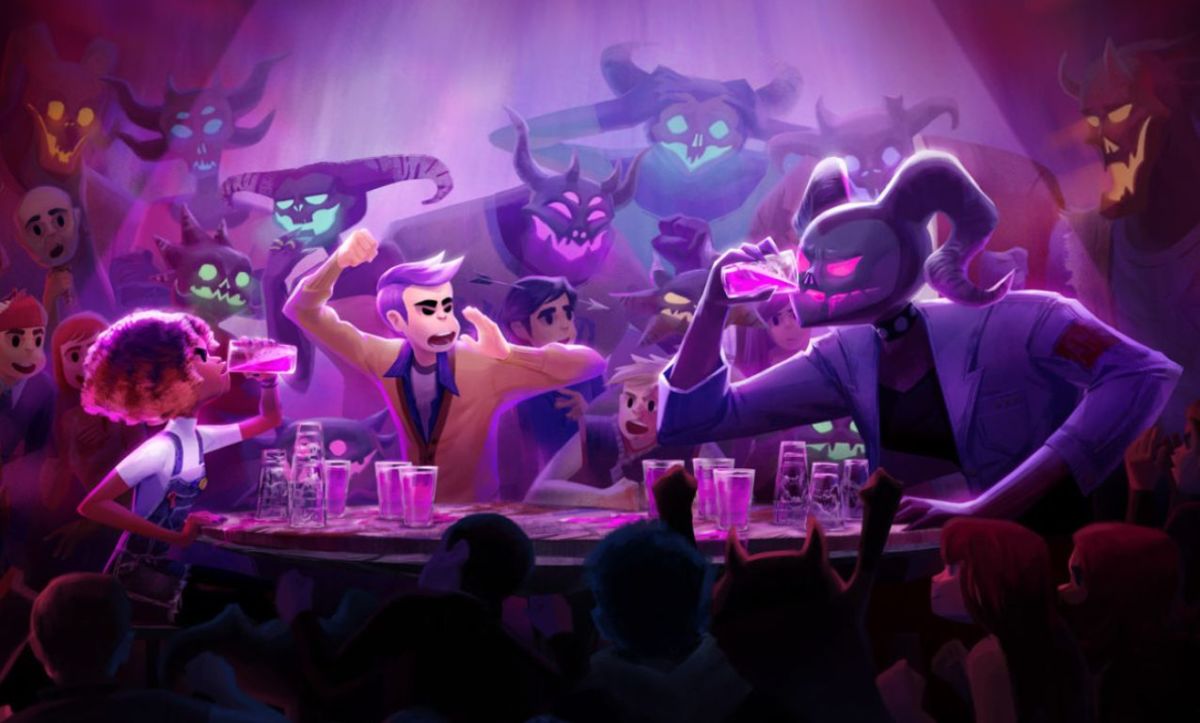 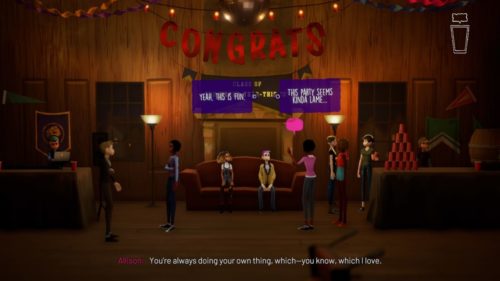 The point and click adventure genre could be considered one of the more tricky genres to tackle in video games. It has a well rooted fan base, but its “less is more” approach to its overall gameplay needs to be evenly balanced with a great story and charming characters. Afterparty achieves just that, as while its runtime is short, it makes up for it with plenty of personality and charm that will keep you playing until the end, and maybe coming back for a second round.

You take control of two lifelong friends, Milo and Lola, who have been sent to Hell. They don’t know how or why they got there, but they’re both confident that this is indeed the worst hangover in history. The choice is simple: either succumb to their punishments for all eternity or beat the Devil himself in a drinking game and return to Earth, making many a fiendish friend along the way. 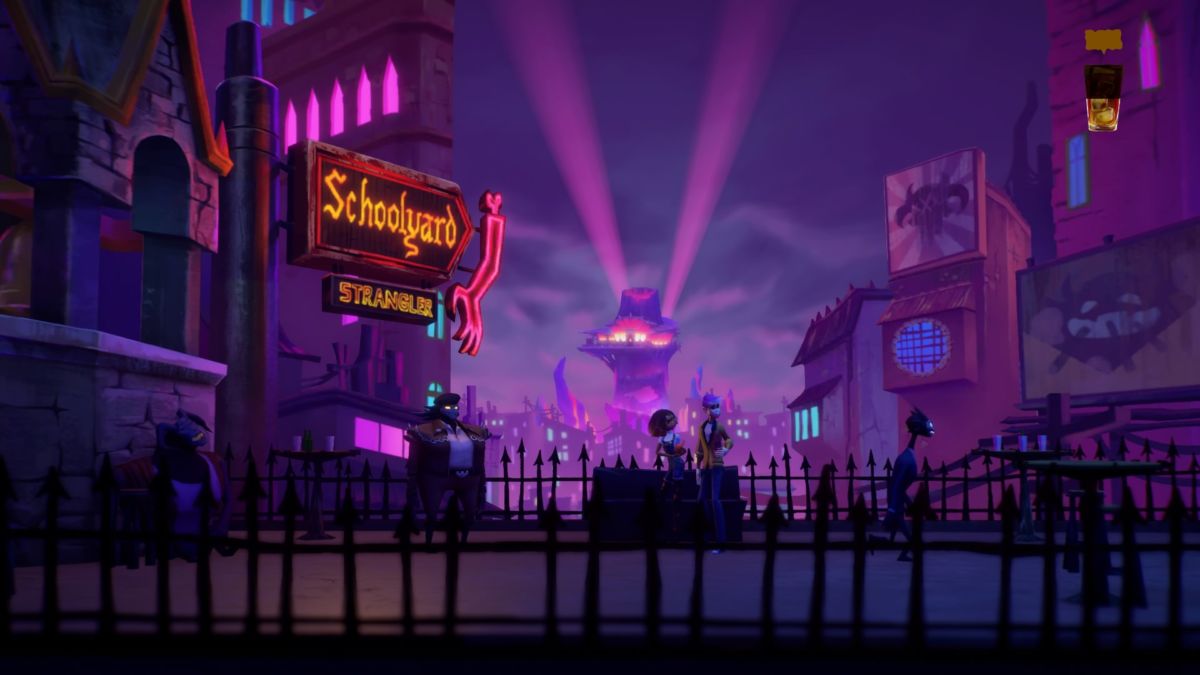 Afterparty’s art style is something you can warm up to. While the dripping neon style is slowly but surely being done to death in various indie and AAA titles alike, it serves the overall lighthearted tone of the story very well. The character models are reminiscent of Jamie Hewlett of Gorillaz fame, with their beady black eyes and odd body proportions. Afterparty’s idea of a vibrant Hell is devised of five islands to travel to and from, but not one island looks the same. Each island has its own style and presentation and while you don’t stay too long in one place, their vivid personalities warrant full exploration.

The overall writing in Afterparty is charming, to say the least. Most of the game’s zingers and one liners land very well and you can also be forgiven for thinking that the majority of the writing was lifted out of a Pratchett novel. What also resonates is that most of the dialogue actually leads to a plot point. Whether it’s character background, hints or just Milo and Lola conversing while trekking across the vast hellish landscapes and discovering more about their pasts, no line of dialogue is spared and all contribute to the bigger picture Afterparty is trying to paint. 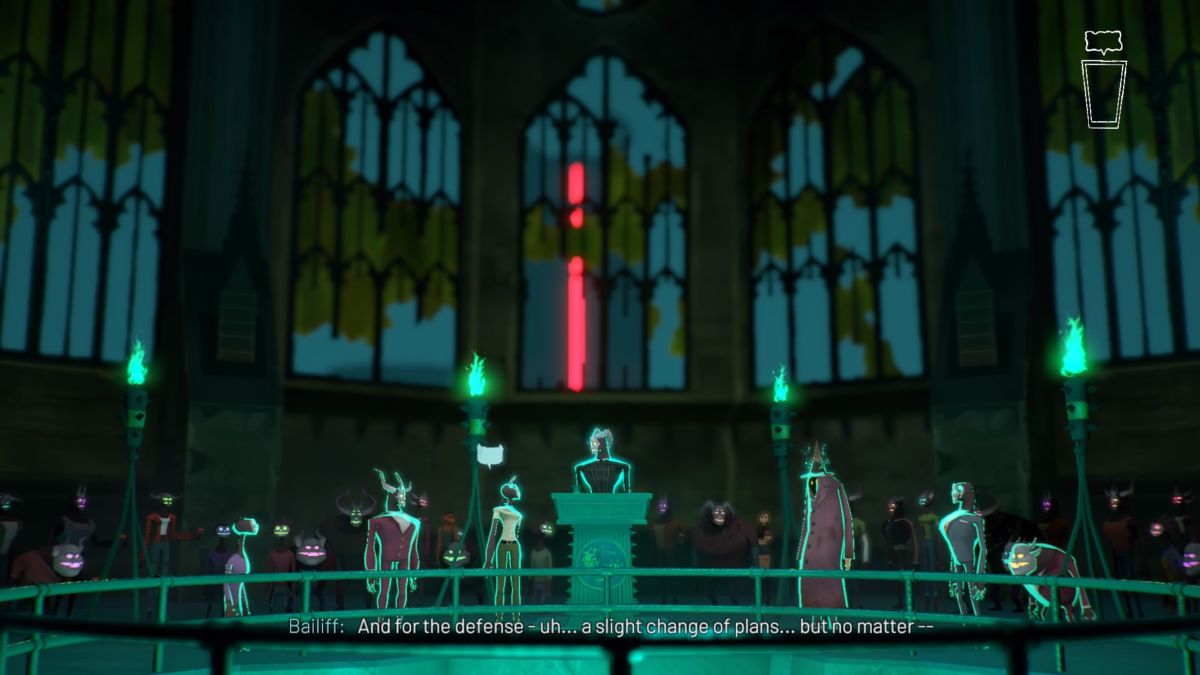 Another aspect to take away from Afterparty is that despite its madcap and lighthearted premise of the afterlife, there are some serious tones that brings to question the gravitas of Milo’s and Lola’s plight. Other various conversations between themselves or Sam, a literal Uber driver from Hell, show that neither were evil at heart or outright nasty people. Their only sin is that they just sucked at life in general; it’s established throughout that they are two socially awkward young adults who just don’t know how to live.

Despite its booze soaked premise, a deeper moral about the dangers of alcohol and how too much can be a bad time rather than a good time. While the dangers of binge drinking is a moral we’ve all heard before since our school days, it’s how they convey this message that makes it unique. 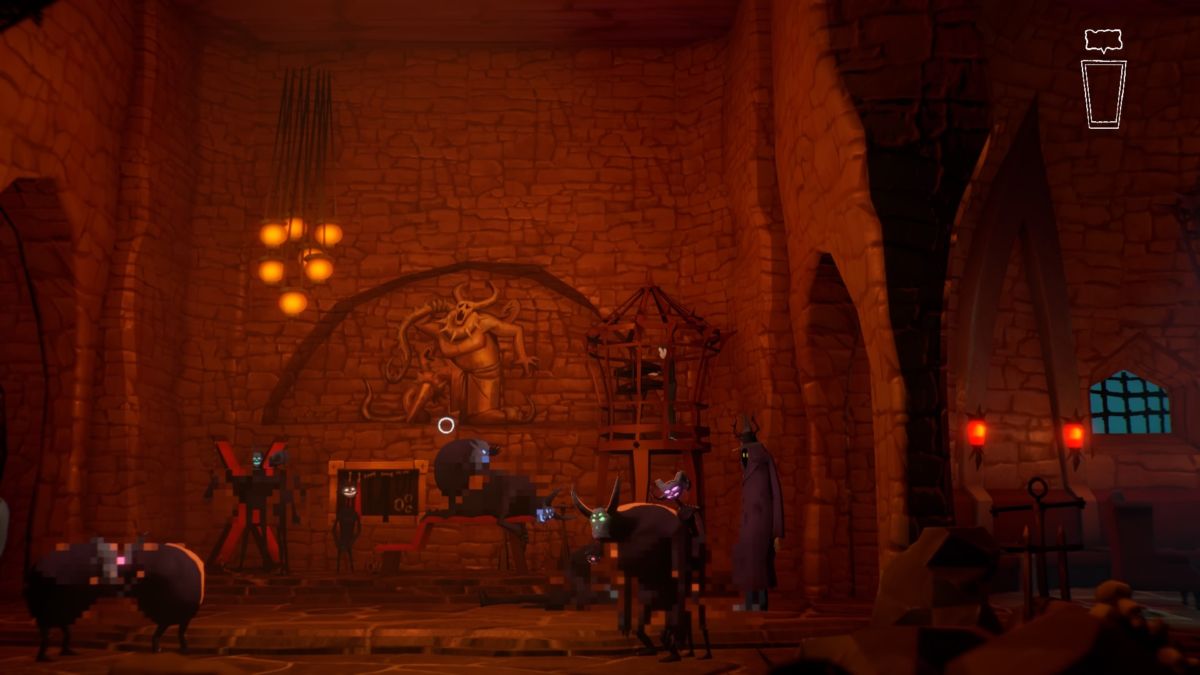 As previously mentioned, Afterparty’s mechanics are simplistic. It’s a demonic version of The World’s End, jumping from bar to bar, while thankfully the monotony of walking from point A to B is broken up by conversations between Lola, Milo and occasionally other characters. You can challenge the Devil’s minions to party games such as beer pong, shots or a dance off, or get to know the locals through ordering a slew of creative sounding cocktails. Some favourites being ‘Look Out Behind You’, the ‘Global Extinction’ or ‘Literally Acid’ all stick to the Hellish themes, and also wouldn’t sound too out of place at a swanky London bar.

Drinking plays an important role in Afterparty. Throughout the game, you have dialogue choices to pick from and having a drink on you does open a third dialogue choice when prompted. Some drinks may have you cracking wise with other characters, others will have you confident and one particular drink makes you talk like a pirate. It doesn’t help you in convincing other characters to your side of the argument like other drinks do, you just banter like a pirate. 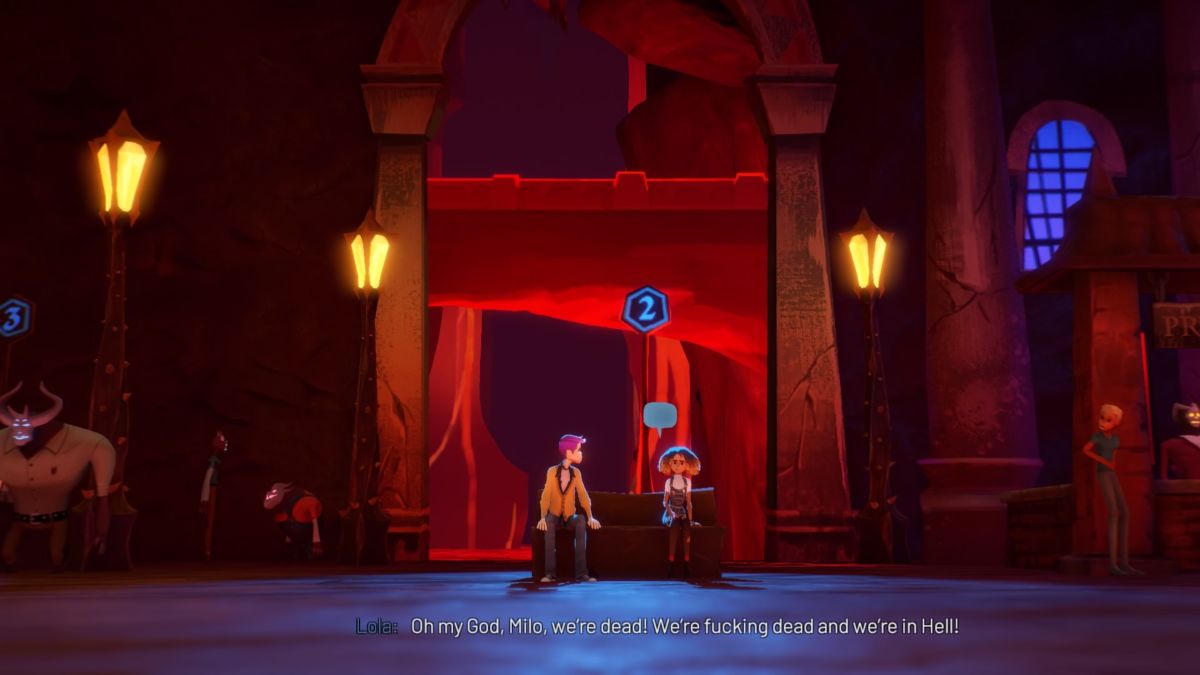 The aforementioned party games require a surprising amount of pinpoint precision if you want to succeed. Beer pong has you aiming at red cups and hitting X to launch your ping pong ball with the first to 4 being the victor. Shots require you to knock back a shot, before stacking the glasses using a sliding gauge to stack them neatly. This game demands precision and blind faith to line up at least 3 in a row without getting too drunk and watching the gauge blur out, while you’re throwing shot glasses all over the table. The third and final mini game is a dance off, which is a series of button commands that aren’t too challenging and the easiest of the three minigames.

During my initial run through of Afterparty, there were only two blemishes I found, the first being the occasional screen freezing while the game was loading in the background. While this wasn’t a deal breaker, it may snap you out of the overall immersion, especially in mid conversation. 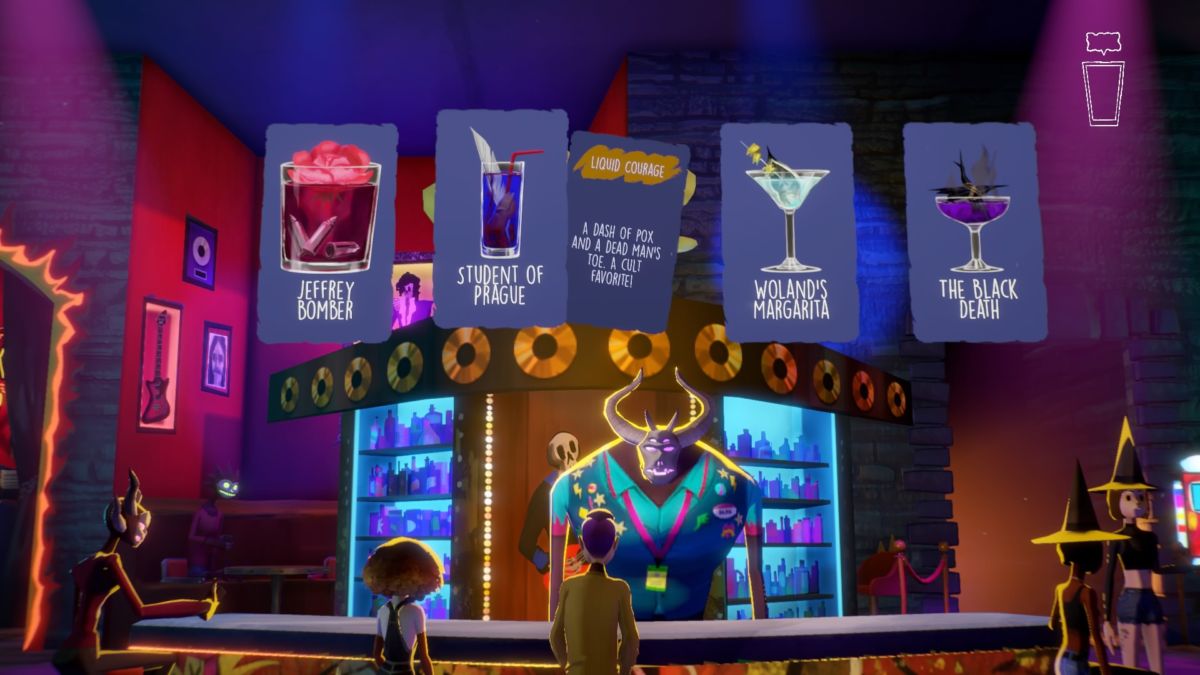 The other blemish was that it is perhaps too short of an experience. While shorter experiences are the norm for most indie titles, Afterparty’s story took me just shy of 7 hours to finish. It was such a shame to leave these well written characters and a world that was truly worth exploring behind so soon. Afterparty does require a second playthrough for the completionists among us, but there wasn’t a huge reason to come back other than look at the different choices available.

Afterparty is a charismatic experience that any adventure game fans will appreciate. A love letter to the humourous point and click adventure games of old such as Sam and Max or Day of the Living Tentacle, Afterparty also doesn’t shy away from having some serious morals in place, without feeling preachy. It’s a classic tale for a niche audience and worth your time for the story alone, so raise your glass to one hell of an Afterparty that you wished would never end.

Verdict
Afterparty is like a Godfather cocktail: devilishly sweet and won’t leave you with a remorseful hangover. Night School Studio can toast to creating a funny and endearing tale.
8