Despite its meandering dialogue and laughable French accents, if you are looking for a rewarding single-player driven campaign, A Plague Tale: Innocence is the game for you. 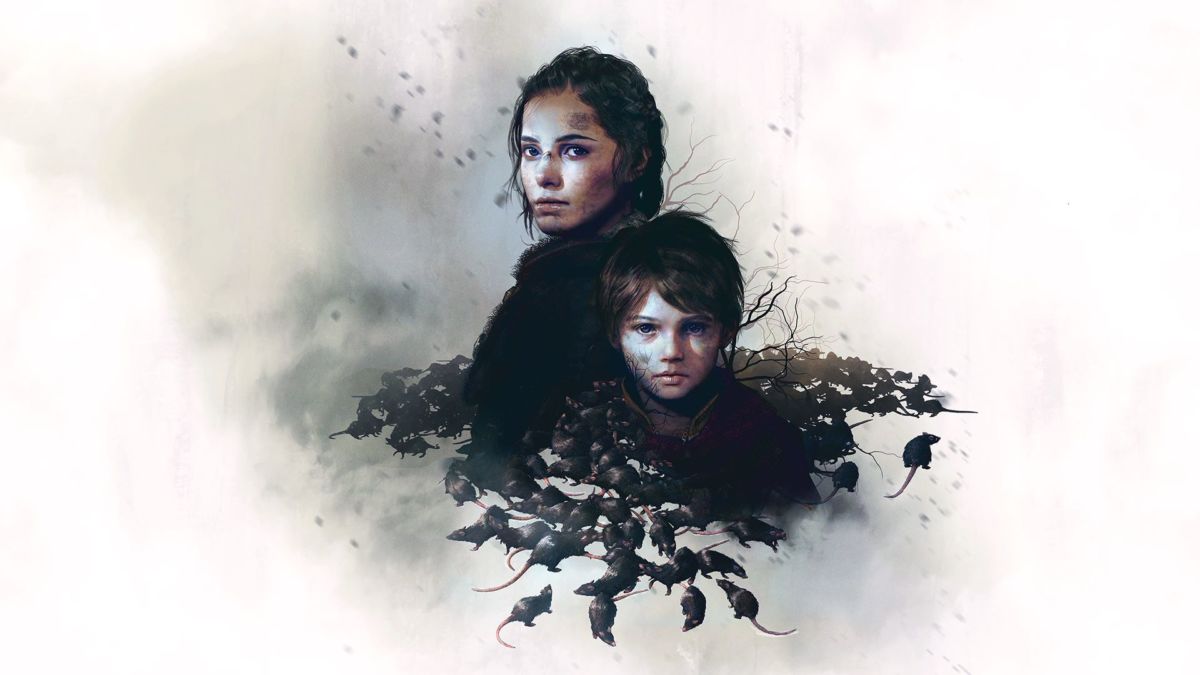 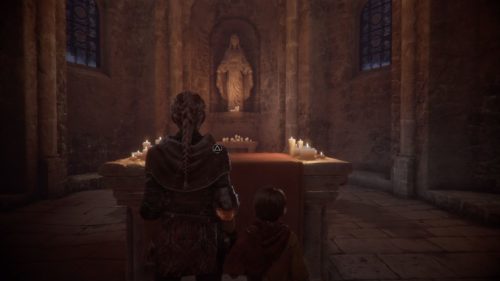 A Plague Tale: Innocence, while a relatively short experience at just under 20 hours, does exactly what it needs to in order to tell its story. What you get is a focused game that takes stealth survival action elements, adds some intriguing villains and a presentation style that leaves you so immersed with its setting that you can almost smell the foul stench of its Dark Ages backdrop.

Set in 14th century France, you are Amicia De Rune, a noble woman from a wealthy family whose world is turned upside down when her home is attacked and her family is slaughtered, except for her younger brother, Hugo. Hugo is a sickly child and it is not exactly clear why to begin with, but it does make the surviving De Rune family social pariahs and a constant target. 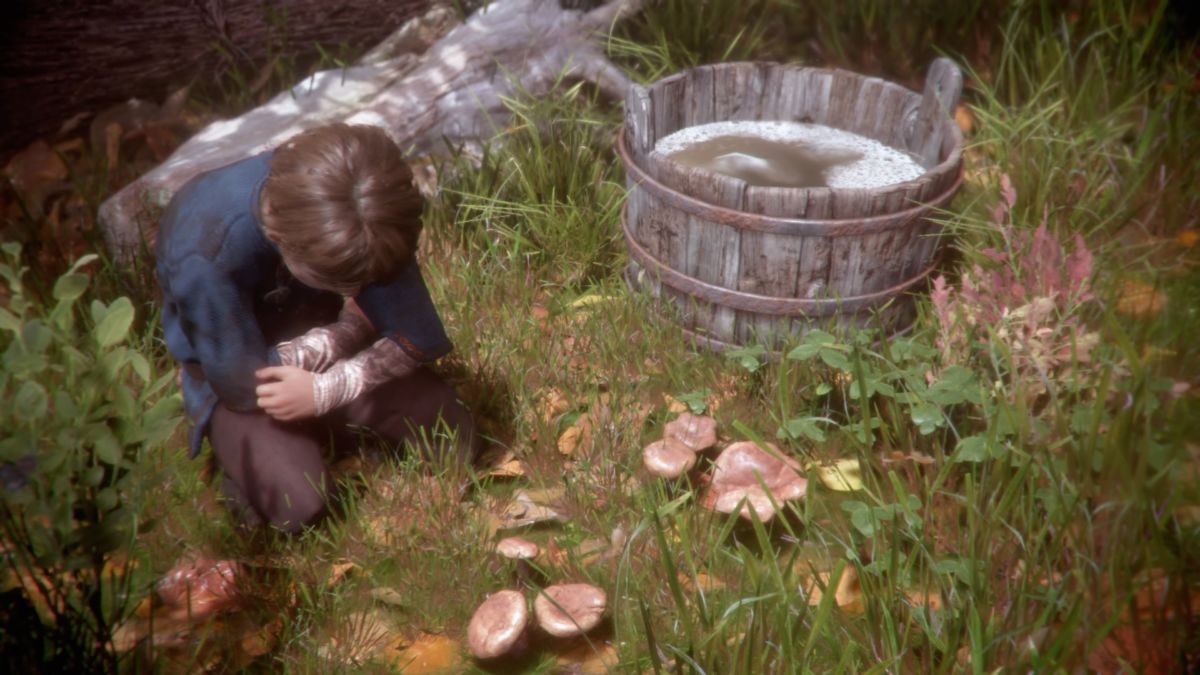 They set off on a journey to find answers as to what the ‘Prima Macula’ entails, befriending a cast of young rogues and alchemists all while being pursued by the often barbaric and ruthless Inquisition, led by the corrupt grand inquisitor Vitalis Benevont and his right hand man mountain, Sir Nicholas. This is not to mention the army of rats that also dominate A Plague Tale, but we will get to them later on.

To the story’s strength, its villains are, for the most part, very well written. Taking inspiration from the Darth Vader and Senator Palpatine relationship from Star Wars, what works is that when these villains are seen, there is a general aura of dread and terror surrounding them, so much so that you genuinely want to run far away when they appear. 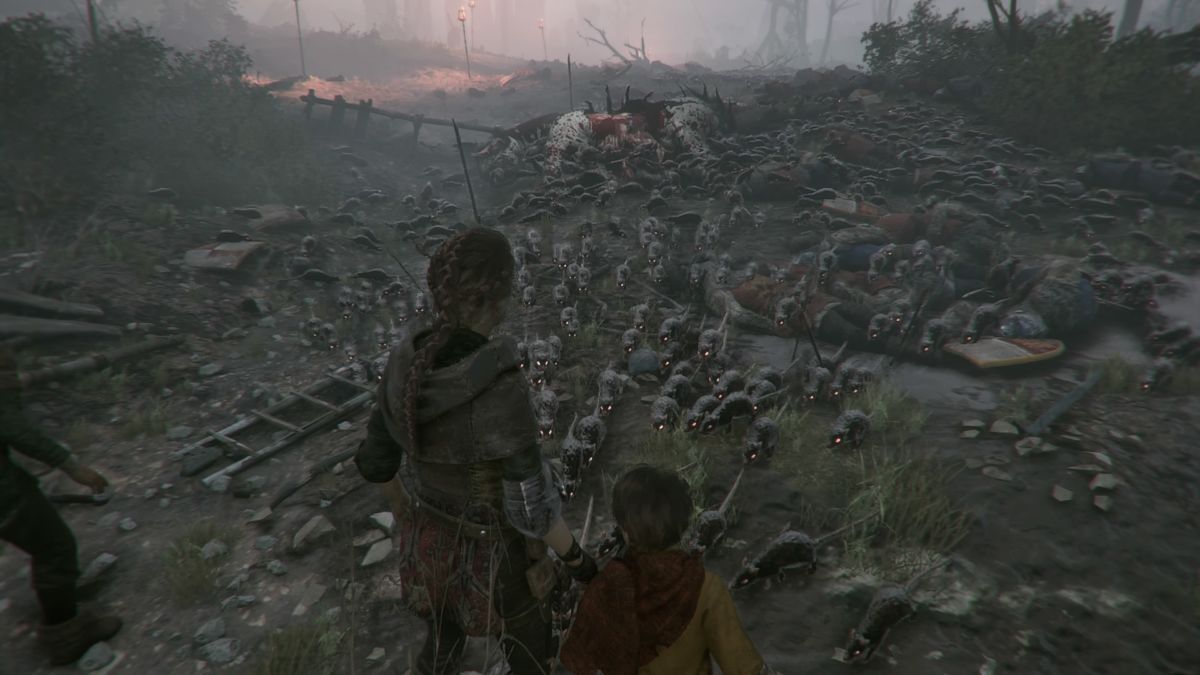 If only the same praise could be given to A Plague Tale’s protagonists. It is sad to say, but the biggest downfall of A Plague Tale is actually how unlikable most of its protagonists are. With the exception of the young blacksmith – the wisecracking Roderic – most of the protagonists come across as spoilt and have no sense of urgency for the task at hand.

If we were to compare the relationship of Hugo and Amicia to Joel and Ellie from The Last of Us, throughout The Last Of Us we see the two protagonists bond and grow as characters, to the point where their relationship is akin to a father and daughter — each step they take shows you just how important their goal is to the point that when one of them is in trouble, you feel for them. Hugo and Amicia are brother and sister and yet they are not written that way; the chemistry is just not there and it in some cases does take you out of the immersion entirely. 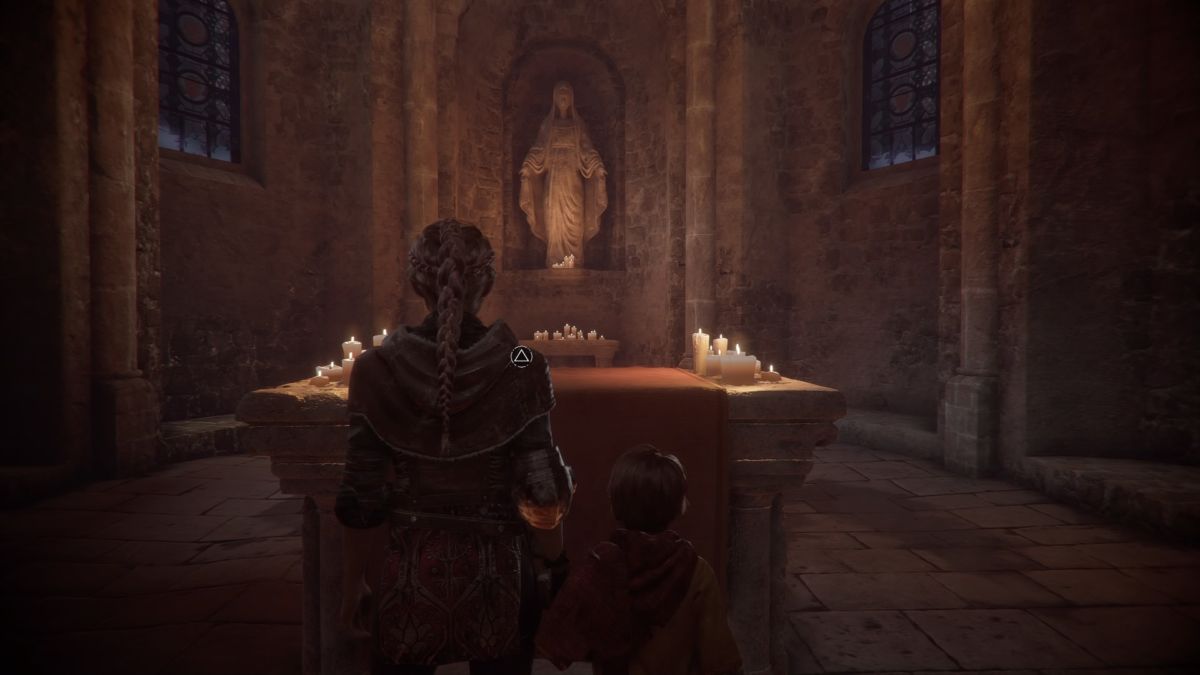 One element Asobo Studio should take a bow for is their art direction. For a game that takes place in Medieval times, it had to have been a trying task to make a world often presented as depressing and murky stand on its own two feet. Its daylight settings have a palette of luscious woodland greens and sun rise golds, whereas its night time settings – in which you will be spending most of your time in A Plague Tale – are countered with deep navy blues and crackling orange fires. Such a wonderful job has been taken that you want to fill up as much time as possible exploring the world around you.

A Plague Tale is, at its core, an action stealth game. To start with, you are equipped with a slingshot, which can be used to distract enemy guards or as a weapon against un-armoured enemies. As the game progresses, there are more ammo types to unlock and upgrades to be purchased for your equipment that make your slingshot quieter or help you sneak around more silently. 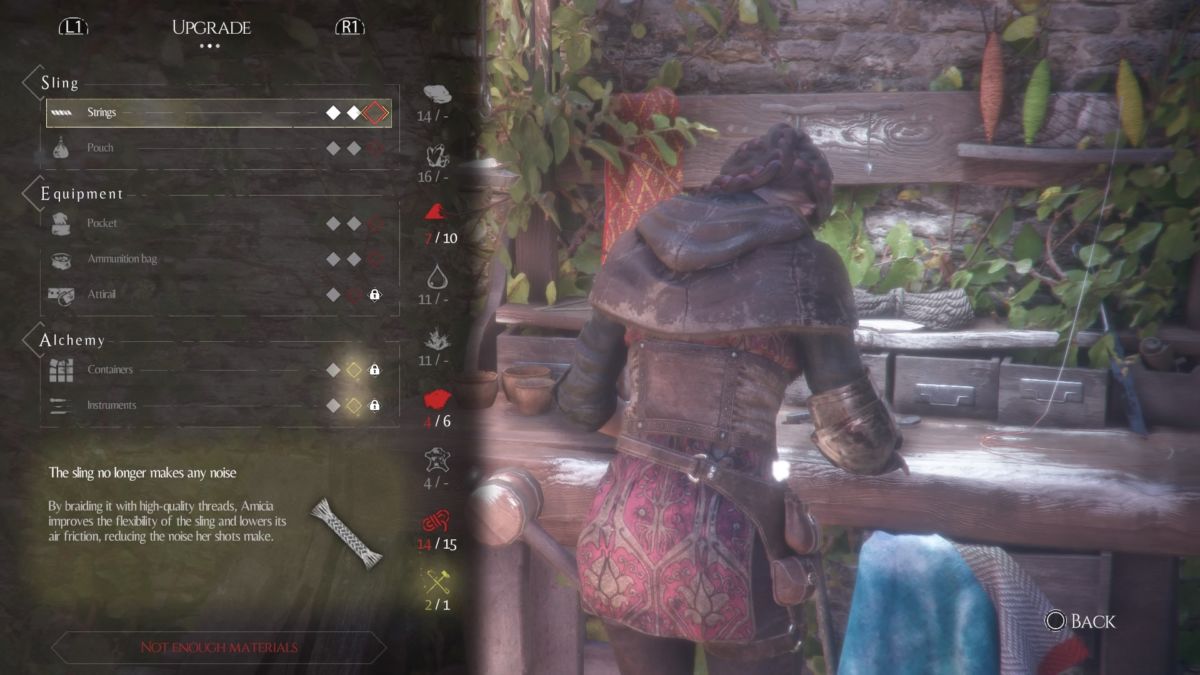 Upgrades can be found via the generous amounts of materials available in each chapter. You should be warned, however, that these same resources are also needed to craft ammo, so it is best to keep an eye on what you’re using just in case you do run out of sulphur or alcohol. There are also the usual trappings of hidden collectibles which implore a second playthrough and thankfully each chapter has a checklist of the special items you can collect to keep completionists from tearing their hair out.

You don’t need to be a history buff to understand that the great plagues of Europe were caused by infected rats and my hat goes off to A Plague Tale for taking a non-threatening small rodent and turning them into a major threat. The rats are first introduced in Chapter 3 and, as you can imagine, are wreaking havoc across the French countryside and eating anyone they can find in the dark. 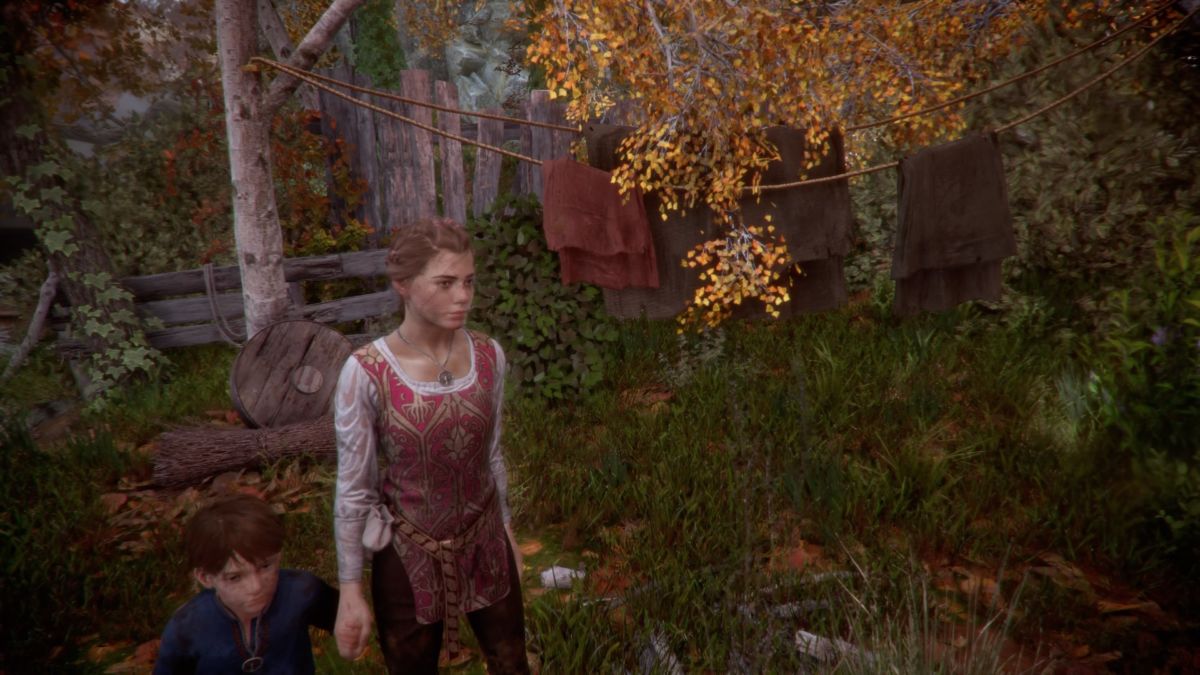 Fire is their only weakness, which is where the game takes a break from its stealth action and turns into a puzzle platformer. Using fire, brazier and machinery to help deter the rodents and light up your paths from point A to B, these puzzles don’t pose too much of a challenge, but do give you a nice break by not making the game too repetitive.

As the game progresses, these rats will smarten up to your ways and will use more sophisticated techniques, including gathering in a swarm to put out any fires, making your life just that little bit more difficult and keeping you on your toes in later chapters. It is a creative decision that must be applauded; taking a minor threat and making it a major one is exactly why games with horror elements are truly memorable. 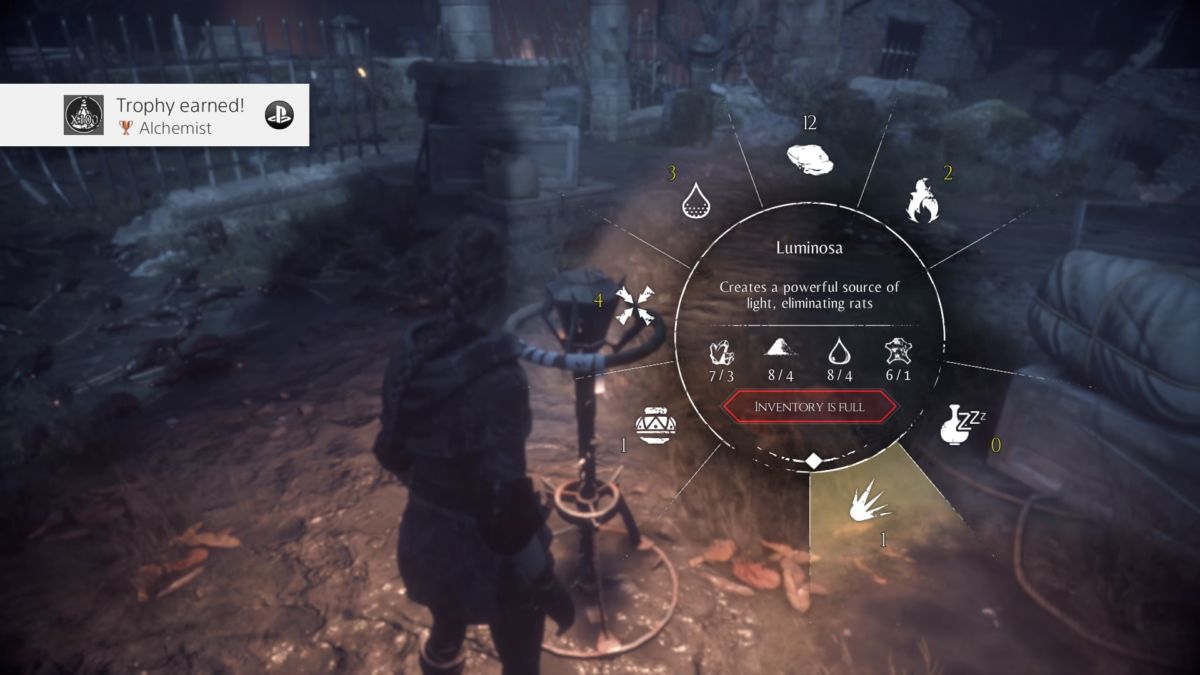 Resident Evil is not a memorable franchise because it has “just” zombies — it’s what they do with the undead, such as the lickers or ravenous dogs, that makes the experience truly memorable. A Plague Tale achieves something similar: they’re not “just rats”, they are an army ready to tear you limb-from-limb if you dare take one wrong foot away from the fires that keep you safe.

Despite its meandering dialogue and laughable French accents, if you are looking for a rewarding single-player driven campaign, A Plague Tale: Innocence is the game for you. It’s not the longest game on the market, but that can be forgiven thanks to its tight gameplay mechanics and immersive backdrops. This game deserves your time and I honestly hope to see a sequel in the near future.

Verdict
A pox on your houses if you do not give A Plague Tale: Innocence an honest try. Forgive its iffy dialogue and you will be treated to a refreshing take on the stealth action genre.
8.5