11 Best Bound For Glory Matches Of All Time

This wrestling made quite the impact. 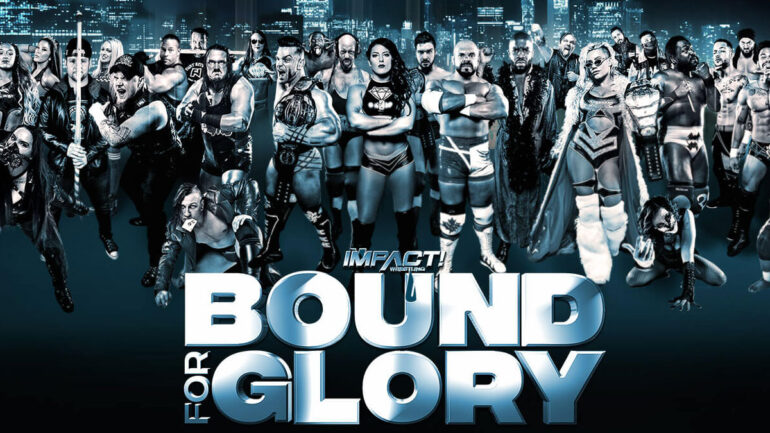 After a successful Slammiversary PPV earlier this year that brought new eyes to the product, Impact Wrestling has capitalised by demonstrating a consistent weekly show focused on characters and slow-burn storylines.

The three months since has built upon their work and set the stage for the 16th iteration of Bound For Glory, one of their biggest events of the year. In celebration of that, let’s look back at some of the best Bound For Glory matches over the last two decades.

For the first PPV of the SpikeTV era, TNA went big with the return of one of their better original matches, the Monster’s Ball. A no disqualification match with weapons allowed and first fall to a finish, the premise was that each member was locked away for twenty-four hours prior to the match (that was quickly ignored after a few matches).

However, with four wrestlers perfectly suited to weapons and high spots, anticipation was high for what became a violent brawl filled with violence. Hardy hit a Swanton Bomb off the stage to send Abyss through a table, chairs and tables galore were utilised and even ladders were introduced.

After a vicious Gore to Abyss through a table and a middle rope Piledriver to Hardy, Rhino claimed the victory and ended the night as the new TNA Champion.

Two legendary alumni of TNA faced off for the X-Division Championship in a thirty minute Iron Man match.
Sometimes, you don’t need to sell a match, it sells itself, such as one of the best wrestlers in the last twenty years (Styles) taking on one of his greatest rivals (Daniels). With two competitors who knew each other so well, the chemistry is unquestionable in an excellently paced match that showed the best of the X-Division.

At Against All Odds 2005, Styles defeated Daniels 2-1 in overtime, and this match went one step further, with neither man able to get that first fall until the final seconds of this physically draining battle. The psychology builds throughout as both men battle one another, Styles’ early control giving way to Daniels’ vicious attacks. As both competitors grow in exhaustion, Styles eventually survives against the odds and achieves the victory with seconds to spare.

Senshi is more well known as Low Ki, the inaugural Ring of Honor champion and the winner of the second season of Tough Enough (to Vince McMahon’s annoyance). His reputation for destructive kicks is only eclipsed by his ‘difficult’ reputation, but he was perfectly suited as a representative of the X-Division.

These two quickly went big, hitting one another with everything they had during a back-and-forth battle, Senshi’s renowned intensity giving him the edge throughout. However, Sabin eventually utilised Senshi’s ferocity to his advantage by surprising him with a roll-up, taking the victory through intelligence as opposed to violence.

As an example of extra depth the X-Division possesses beyond its ‘no limits’ mantra, it’s one of the best matches on the show.

A year on from their excellent Iron Man match, Styles and Daniels joined forces to become tag team champions, defending against Homicide and Hernandez inside the cage. It begins with regular tags but eventually deteriorates into all-out madness, with all four men putting it on the line. Konnan slides a fork into the ring early on, and a coat hanger later on, allowing the challengers to use dirty tactics.

Styles and Daniels’ ingenuity and underdog spirit gave them a great chance to retain, including an unforgettable dive off the top of the cage from Styles. However, the cruelness of Homicide and dominating power from Hernandez left Daniels bloodied and Styles battling the odds alone.

With tremendous violence and crazy high spots, this is an excellent representation of the tag team division during this period.

Christian Cage entered this match having never submitted or been pinned in TNA, with Samoa Joe on the warpath. Matt Morgan is on the outside as the special enforcer to prevent AJ Styles and Tyson Tomko from assisting Cage. Attempting to utilise all his tricks and experience, Christian struggles to survive Joe’s power and technical ability, even attempting to walk out at one point.

As the match continues, Joe steps up and resurrects the spirit of the killer Joe who debuted years previously, eventually battering and destroying Christian in the third act. Despite hitting the Unprettier and even attempting his version of the Clutch, Christian taps out after Joe locks in the Clutch.

Matt Morgan spent several months campaigning to become a member of the Main Event Mafia, with Angle taking advantage to use Morgan to keep his championship. This eventually backfired on Angle when Morgan cost him the championship at No Surrender, Morgan gaining revenge in the process. This led to a grudge match between the two at this event, one that seemed designed to elevate Morgan into the main event.

While Morgan doesn’t quite meet that requirement to be a new main eventer, the match is still good fun with Angle attempting to cut his giant opponent down. The story and psychology is intelligently plotted out, and Angle’s victory keeps both strong as while it’s a clean victory, it wasn’t easy.

As an example of Angle’s ability to elevate an opponent, during his work for TNA, 2009 is worth a watch.

Bound For Glory 2010 was recognised at the time as possibly the biggest PPV in TNA’s history, with power struggles between Dixie Carter, Hulk Hogan and Eric Bischoff, as well as Abyss and Sting hinting at unknown forces.

To kick off such a momentous event was Alex Shelley and Chris Sabin defending their recently won tag titles against Max and Jeremy Buck of Generation Me, the future Young Bucks.

Two of the fastest paced teams with intricate interplay and spots galore created a high-octane opener that gets the crowd rocking. While it may be devoid of the storytelling and psychology that the Bucks gained over the next ten years (culminating in their tag team classic against Kenny Omega and Adam Page), the gradual building of both teams trying to one-up one another is tremendous fun.

Prior to this event, Rob Van Dam was forced to vacate the TNA Championship due to injury, with an 8-man tournament culminating in a three-way match for the championship.

The stakes were high as Dixie Carter stood at ringside and the year-long build up for who ‘THEY’ were seemed primed for this match. In the end, both Eric Bischoff and Hulk Hogan entered the ring, with Hardy turning heel and winning the title.

The main issue is usually the finish and the unsurprising need for Bischoff and Hogan to put themselves in the spotlight. The debut of Immortal began the gradual fall from grace for TNA, with repercussions that took several years to deal with. However, outside of the context of the ending, the match itself is an underrated gem that features three of the biggest wrestlers in TNA’s history.

The current iteration of SCU with Scorpio Sky began back in 2012 when Daniels and Kazarian first came together, entering this match as champions with two teams desperate to destroy them. The arguments between Styles and Angle, as well as the lack of experience teaming together for Hernandez and Chavo, had the title holders confident of retaining.

To the surprise of many, Chavo and Hernandez overcame the odds in a high-flying, technical hybrid that featured six impressive competitors. With high drama involved, the new champions dedicated the victory to ‘Uncle Eddie’ in a mild feel good moment.

The main event of the biggest event of the year featured Aries defending the championship against Hardy, who was under suspicion as the leader of Aces & Eights. From a legitimate side, Hardy had suffered major issues from drugs and alcohol the previous two years (including an infamous Victory Road debacle), and this was deemed his opportunity for real and storyline redemption.

In a battle that featured Aries at his egotistical best and a split crowd who found themselves investing in Hardy’s journey, culminating in a glorious victory for Hardy as he willed himself on.

With Aries at the time one of the best wrestlers in the world and Hardy having reclaimed his passion for the business, it’s one of the few highlights prior to TNA entering its wilderness years.

Following the years of disrepute when the death of TNA seemed likely, Scott D’Amore and Don Callis began to right the ship, focusing on character and consistent workers. In 2018, their work culminated in a main event that became extremely personal and blurred the lines of kayfabe and reality, with both men aggressive and stiff during their interactions.

The big fight feel of this match was a deserved reward for the hard work put in by the entire roster and crew, generating worldwide interest in a match of the year candidate. With Aries losing and shoot/work walking out, Impact was left to take the championship forward into a new year, one where Impact Wrestling went from strength to strength.

With the best eleven matches in Bound For Glory history, the expectation is high for this year’s event. Can this year’s edition reach the highs of previous years? There’s only one way to find out.