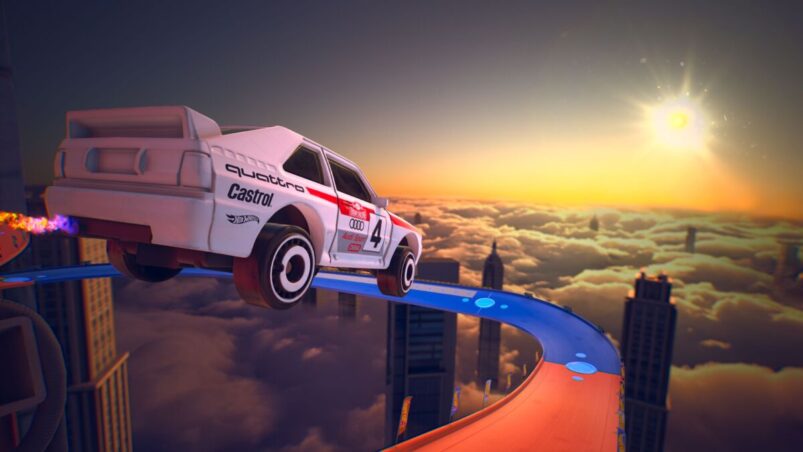 Racing game fans, or those who love to collect toy cars, will likely have some kind of interest in Hot Wheels Unleashed. The new arcade racer from Milestone, Hot Wheels Unleashed sees players controlling various toy cars and driving them around elaborate, dangerous tracks that would have more than a few concerned parents complaining to the newspapers.

While Hot Wheels Unleashed feels mostly like your standard arcade racer, there’s more than a few changes and intricacies that might confuse new players, so with that in mind, we’ve put together a beginner’s guide to allow players to get the most out of the game. Here’s 10 Hot Wheels Unleashed tips you need to know in order to have a wheely good time.

Jimmy made me write that joke under penalty of torture, so this article better do gangbusters.

Boosting is one of the most important aspects of racing in HWU. In order to earn boost, you’ll need to perform drifts by tapping the brake button and moving the left stick in the desired direction. You can also earn boost by driving over specific boost pads, or by drafting behind your opponents.

One thing to consider with boosting is your potential car choice. Cars can either have one of two boost types. They’ll either use a traditional boost bar, allowing you to boost at will so long as there’s something in the bar, or they’ll use a pip based system. You’ll fill up pips while racing, and when one pip is filled, you’re free to let loose.

Following on from the boost point, Hot Wheels makes no effort to divide cars into classes, meaning each race can be a free-for-all of varying stats. Milestone’s way of balancing it is by limiting the boost capabilities of naturally faster cars.

There’s a trade off to consider, as going faster normally seems like a benefit, but on tracks with multiple loops which require boost to adequately clear, cars with only one boost pip may be a hindrance. For reference, I finished most of the career using an extremely fast car with two pips, but with some loop heavy tracks.

This tip is purely anecdotal based on my experience with the game, so you might have more success yourself. However, during my playtime, any experience with a top heavy vehicle led to the car flipping over more often than not after a hard crash. Smaller vehicles are also capable of flipping over, but top-heavy cars feel twice as likely to do so. Choose your vehicle carefully.

Take Shortcuts Where You Can

Some of the best tracks in the game utilise a mixture of elaborate track pieces along with the environment itself, meaning you can be racing on desks, couches and even the floor. When racing on these sections, the track layout will be marked with cones, but there’s a few tracks where you can skip these sections entirely.

Most tracks with these possible shortcuts feature wide and deep U-turns, but the player can easily take the shorter angle through the cones, shaving precious seconds off their time. For some of the later time trial stages, using these shortcuts feels almost essential to earning the best target time, so don’t feel too bad. It seems like it’s dev intended.

Sorry arachnophobes, but for whatever reason, Hot Wheels Unleashed features a giant spider track piece, and you’ll be seeing a lot of it throughout your time with the game. The spider sits above a straight piece of track, and will fire sticky web shots at the player and on the track. Touching any of these shots will cause you to stop dead, and depending on your inputs, you might even rubberband yourself into a 180, which isn’t ideal.

There’s no hard and fast solution for making it through the spider sections, as sometimes it feels like if it wants to hit you, it will. However, there are a couple of tactics to employ that can help. Driving at the spider from an angle instead of straight on tends to work a bit more, especially if you hug the wall nearer to the spider, as the shot will often miss the track entirely. Another trick is to tap the brake and drift one way briefly, only to quickly move in the other direction. It’s a hard one to explain, but you essentially fake the spider out while maintaining your speed.

The career mode, Hot Wheels City Rumble, sees players exploring a map filled with dozens of events, 5 of those being dedicated to specific boss races. Instead of a 1v1 against a powerful opponent, the boss races are your standard 3 lap races on tracks that are longer and have obstacles related to the “boss” itself.

Not all bosses are created equal, with some being more dangerous than others. The first boss, The Nitro Bot, sees most of the track covered in three lanes, swapping periodically between boost and brake pads. The Scorpion is possibly the most annoying boss race, as parts of the track are now covered in a green poison, which will slowly sap your accumulated boost.

Depending on the choices you make on the world map, your next boss will either be the Terrordactyl or the Yeti. The Terrordactyl adds tornadoes across the track that move from side to side. Being caught in them will bring you to a stop for a few seconds. Meanwhile, The Yeti works similarly to the Scorpion, just replacing poison with patches of ice that make it harder to turn. Lastly, the final boss race is The Haunted House, with ghosts littering the track. Hitting a ghost will cause a similar effect to Mario Kart 8’s Bloober item, so if you’re used to playing that, you’ll be fine.

A key factor in keeping up with your opponents is making sure you have the best car you can. Cars in Hot Wheels Unleashed have one of three rarity tiers: common, rare and legendary/secret/super treasure hunt. NOTE: during review, no super treasure hunt level cars appeared, so they’re likely tied to seasonal content.

Common and rare level cars can be upgraded using gears, which will improve the base stats of the car and make them more viable, especially later on when the time trials get harder. It’s worth noting though that upgrading a car will often lessen the amount of boost a car has, and can sometimes even change the type of boost bar the car uses, so be careful about which cars you upgrade.

Because unlocking the vast majority of the cars in Hot Wheels Unleashed is done via the opening of Blind Boxes (loot boxes but without the real world currency), there are often times where opening a box will give you a duplicate car. In these moments, you’re always much better served dismantling the duplicate car for gears so you can make more upgrades, or selling the car so you can buy more Blind Boxes/cars in the rotating shop.

The career mode includes 9 secret races that require you to complete certain conditions in order to access them. Four of the secret races ask you to complete the boss races, while another 3 are obvious enough to complete as the clues mention the race name and car you need by name. However, the last two are a bit more obtuse.

The first secret mission mentions it being your “first day”, and that you’ll be “late for the schoolbus”. In order to complete this mission, you’ll need to finish the first race of the mode with a school bus. Simple. The other mission just says “Mission: Top Secret”, which requires you to complete those three secret races that mention the races and cars by name.

One small last tip to help you maintain boost power, especially if you’re close to filling a pip and there’s a loop in your future, is to lightly tap break and move slightly to the left or the right. Hitting the brake and moving to the side, even if only for a small amount of time, is enough to generate a decent amount of boost, and any time lost by braking lightly is instantly regained by hitting boost.