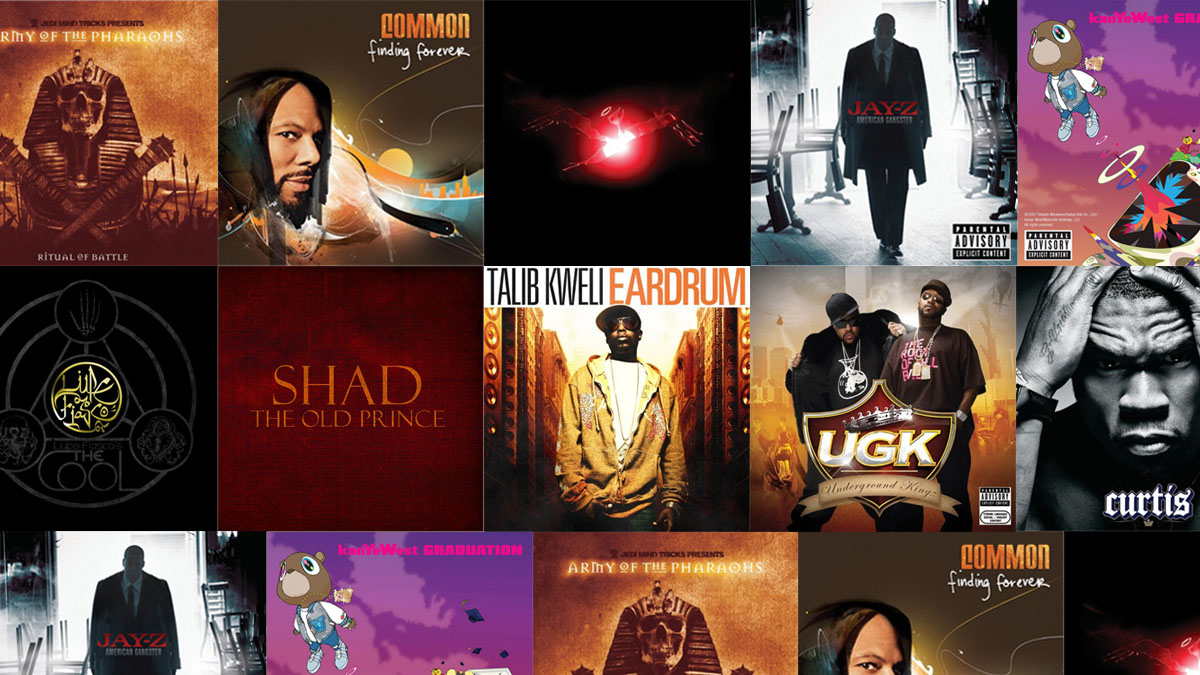 The sound of Hip-Hop music has shifted several times over the last few decades, and it’s always fun to look back and compare where it was in the past to where it is now.

Ten years ago, it was 2007, which saw the demise of popular gangsta-rap, the rise of more flamboyant styles, and the beginning of a push to prove that Hip-Hop still lives, after it was declared in 2006 that Hip-Hop Is Dead. The biggest rap battle of the year had nothing to do with rapping and was strictly about sales.

Here’s a look back at ten albums from that year – not necessarily the best albums, but ten that paint the picture of where Hip-Hop was ten years ago.

10. Army of the Pharaohs – Ritual of Battle

While 50 Cent and G-Unit had temporarily reinvigorated hardcore hip-hop in the eyes of the mainstream, Army of the Pharaohs were just establishing an even more rugged sound in the underground scene. They combined battle-rap skills with war music, which still to this day is great for getting in the zone for a workout.

The individual members of the group went on to expand their horizons when it comes to different styles and sounds, but whenever they reunited for group projects over the years, they pretty much stayed in this same lane established here, as well as on their 2006 debut The Torture Papers. AOTP proved in 2007 that they’re the best combination of sharply-written rhymes and rugged, hardcore beats, and over the past decade they’ve continued to be the best at what they do.

Common’s seventh studio album tends to go underrated, probably because it was his follow-up to the critically acclaimed Be. Sticking to the same formula and having the majority of production done by Kanye West, the album may have sounded like a less worthy sequel at the time, but over the years it has aged gracefully.

When looking at Common’s career as a whole, the two albums that represent the Kanye West era are a highlight, as the production here was the right combination of up-tempo and soulful. Common went on to make albums predominantly produced by The Neptunes, No I.D., and Karriem Riggins, but Finding Forever would be the last time him and Kanye West could be referred to as a team.

Before he was kicking ass and taking names with Killer Mike as the duo Run The Jewels, El-P was a driving force in the underground scene, producing for other artists and releasing his own solo albums once every five years (fun fact: if he sticks to his five-year pattern, 2017 would be when his next solo effort is due).

With the dark vibes and heavy New York style on this album, it’s difficult to picture El-P going on to blend southern styles with Atlanta’s own Killer Mike and reach the peak of his popularity with Run The Jewels. While Run The Jewels’ music is mostly fun or political, El-P’s solo albums are where he gets really introspective and experimental. This album is just one part of the foundation used to build the Run The Jewels sound, and part of what makes El-P a great solo artist in his own right.

Some might say that American Gangster is the last great Jay-Z solo album. With every subsequent release up to this point feeling like he’s just having some fun during his rap retirement, and the previous release being 2006’s lukewarm comeback Kingdom Come, this one is a standout in Hov’s discography.

The film of the same title from that year (starring Denzel Washington) gave Jay-Z new inspiration, and a direction for this project. You can hear the passion as Jay ties aspects of Frank Lucas’ life to his own, and seems more focused on painting a picture throughout the album as opposed to filling it up with hits for the clubs. We haven’t seen Jay this focused on maintaining a theme since this project.

Looking at Kanye West today, it was hard to imagine what he’d become back in 2007. This is when he was arguably at the top of his game, with his third classic album in a row and no major musical criticisms (yet).

Graduation saw him make a shift towards more electronic sounds, which lifted him from being just another rap star to an A-list celeb. Not to mention that this is the album that killed mainstream gangsta rap, as Kanye’s sales battle with 50 Cent ultimately saw him rise to further heights, and 50 fall into obscurity. If he hadn’t already made it cool to be nerdy with his previous two albums, the Graduation made it official.

All these years later, it can be said with confidence that The Cool was Lupe Fiasco’s most successful album. It has the critical acclaim of his debut, 2006’s Food & Liquor, and the commercial success he would carry forward to 2009’s Lasers.

His sound gained a little pop appeal but still sounded organic, and he kept the complex lyricism top notch to make what might be the best rap album of the year. The Cool still holds up today, as new stars have emerged to dominate the mainstream landscape Lupe once ruled, but none have shown the lyrical craftsmanship Lupe mastered on this album.

Despite this being his sophomore album, The Old Prince would be Shad’s introduction for many fans. This is the one that made noise, got heads turning and earned some of Shad’s first award nominations.

The lyrical skills, sense of humour, and relatable personality were on full display, and years later he hasn’t compromised any of these attributes on his way to becoming one of Canada’s most acclaimed artists. This is the first of several Canadian classics Shad would release, and ten years later, he’s solidified as one of the country’s all-time greats.

Talib Kweli‘s third solo album might be his most well-balanced one to date. All these years later, it stands as his longest project, clocking in at almost an hour and twenty minutes, and it’s that length that allows him to touch on all aspects of his personality.

We get a healthy dose of Talib Kweli as the social & political activist, the braggadocious MC, the smooth-talking ladies man, and the laid-back “Everything Man.” We also get to see Talib work with several different producers we’ve come to love hearing him collab with over the years, from Hi-Tek to Pete Rock, to Madlib to Kanye West. Today Ear Drum remains simply a great album by a great artist, who had proven longevity before it and continues to maintain that longevity.

It seems hip-hop always has another fallen star to mourn over. This past year we celebrated the life of Phife Dawg with one last album from A Tribe Called Quest, and a decade ago this UGK album would represent the same for the late Pimp C.

The group was a big deal in the 1990’s, but had a relatively quiet 2000’s while Pimp C was incarcerated, and this chart-topping double-disc album was the group’s first release since his release. The celebration would be short lived however, as Pimp C would pass away before the year ended, and Bun B would be left to return to his solo career. This album is one last look and sound to remember Pimp by, and we can’t forget that he left us with one of the most memorable hip-hop wedding anthems!

The beginning of the end of an era. Ten years after the sales battle between the September 11th releases of Kanye West’s Graduation and 50 Cent’s Curtis, it’s clear that the outcome not only paved the path of the two artists, but also hip-hop as a whole.

Today, Kanye is still a musical giant, while 50 Cent is now known more for corporate deals and social media antics than music. This album was one last push for gangsta-rap to succeed in the mainstream before it would eventually be replaced with trap and mumble-rap, becoming a mockery. Looking back at it now, even though the rhymes were too simple to enjoy at the time, the days will be missed when rappers like 50 Cent and G-Unit were at least rapping.

What was your favourite album from 2007? Which key albums did we miss? We know there are several albums we left out! Hit us up on Twitter at @SYpherSights and/or @CultVultures for more dope Hip-Hop commentary.