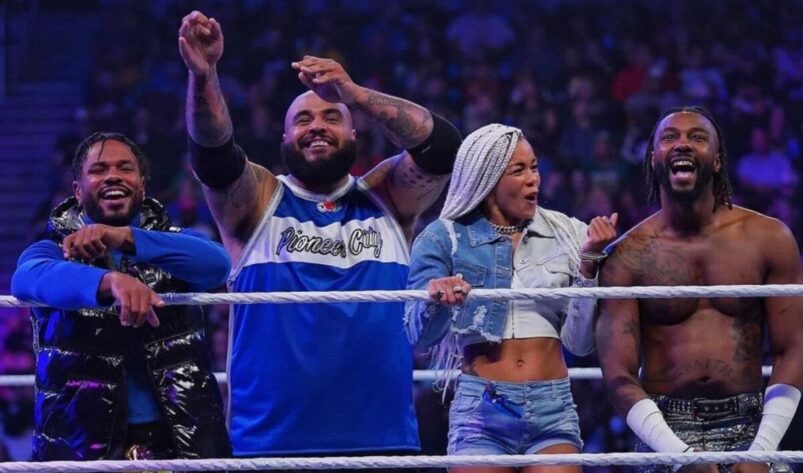 Yet another blast of shocking releases from World Wrestling Entertainment has cut short the careers of Isaiah ‘Swerve’ Scott, Top Dolla, Ashante ‘Thee’ Adonis and B-Fab, the stable known as Hit Row. The urban-inspired faction burst into relevancy as part of NXT’s final act before transitioning into NXT 2.0, the tandem showed promise with the veteran ‘Swerve’ at the helm. Their charisma shined through with their unique promos and self-made entrance theme, all of which screamed success as part of the black and gold brand.

Isaiah was the first to achieve anything in the way of championship success, capturing the North American Championship from Bronson Reed, another NXT star who found himself a victim of budget cuts earlier this year. This led to a pretty intense feud with another of NXT’s stables, Legado Del Fantasma, producing a series of exciting tag matches and eventual North American title match between the two leaders on NXT TV, however the superstar that walked away with the title on that occasion was a cashing-in Carmelo Hayes, the winner of NXT’s most recent Breakout tournament.

Upon their abrupt call-up to the main roster as part of the 2021 Draft, fans were excited to see what plans were in store for Hit Row, who had garnered some of the biggest headlines coming out of Draft week. As time progressed, rumours started to surface regarding the status of Top Dolla, the big hoss of the group, who was penned for future singles success over the likes of the more experienced ‘Swerve’ Scott and his partner Adonis. Dolla would instead be destined for the main event scene, with perhaps a flirtation with the mid-card championship picture before moving on to bigger things.

This news wasn’t exactly poorly received, as fans were excited to see Hit Row attain some sort of mainstream attention regardless of who was on top. Naturally, if Top Dolla was in the marquee matches, then the likes of Scott, Adonis and B-Fab would share in that success within their own divisions. However, things took a sudden turn when it was announced that the faction’s female counterpart, B-Fab, was released from her contract.

Hit Row fans were astonished that WWE were so willing to scrub out one of the key elements of Hit Row’s success. B-Fab barely spoke since her debut on the main roster and hadn’t been given the chance to even step into the ring in front of fans. The reactions from her teammates demonstrated just how devastating this was, and almost marked the turn of the tide in their momentum.

Less than a month later, the now-trio were also given their marching orders.

Ultimately, this stands out as one of WWE’s biggest failures of 2021, having had a golden goose in Hit Row debut with so much support and anticipation, only for them to be dropped after just two or three promos on SmackDown Live. It’s utter madness to think that WWE were so high on the faction to the point where they were one of the few NXT attractions that were cherry-picked as part of the 2021 Draft, over the likes of Tommaso Ciampa, Johnny Gargano and Kyle O’Reilly. To hear that Top Dolla, a wrestler that was once considered a top prospect for the singles division, had only just made his in-ring debut, as well as chipping in as a host for WWE’s Most Wanted Treasures, was so swiftly dropped in favour of curving the expenditure, shows just how delusional the folks behind WWE have become.

Likewise, ‘Swerve’ Scott and Ashante are both considered some of the very best in their field. Scott, formerly known as Shane Strickland, was one of the indie scene’s hottest stars, performing all over the globe in promotions such as PROGRESS, PWG and Lucha Underground (as Killshot). Ashante, much like Austin Theory, was a prospect being groomed for success as part of EVOLVE. Whichever way you look at this situation, the release of Hit Row is a shambles, a true example of wasted potential amongst so many other examples of untapped talent being set free.

The one positive to take away from this mess is that the combination of Hit Row are now considered major stars, should they continue to work together as part of the wider independent scene. It’s likely that we’ll see a return of Shane Strickland, the undisputed star power of the faction, and hopefully that will then extend to him keeping the likes of Top Dolla, Ashante and B-Fab relevant in the deep waters of pro wrestling. If Hit Row were to re-collaborate on the indie scene under a different guise, then I have no doubt that they could take over an entire promotion and truly make a name for themselves.

Of course, many fans might assume that All Elite Wrestling are ready to welcome the quartet with open arms once their no-compete clauses time out. AEW could be a fantastic place for them to culminate these months of success, likewise they could take their services to Impact Wrestling or even AAA, two promotions that are slowly rebuilding their place in the industry by sweeping up a few hot leftovers, while building their own talent.

Nevertheless, Hit Row is going to be a hit somewhere in the world. They’ve already proven that they have the mainstream appeal and the ‘it’ factor that few other NXT call-ups have been able to sustain. Hit Row could have been one of 2021’s biggest success stories, it’s just a shame that WWE couldn’t hold onto that thought for longer than just a few weeks.

Best of luck to the four wrestlers, as well as the other released stars who now wander free.

READ NEXT: 5 Forbidden Door Matches That Still Need To Happen